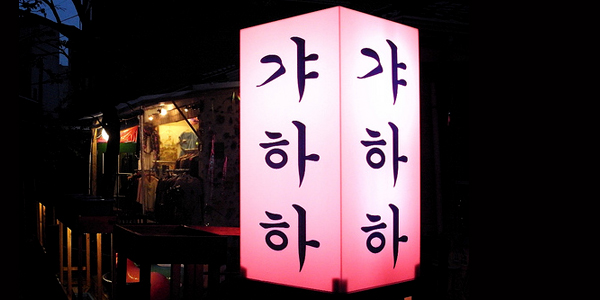 Intimate, funky, homemade. Nothing fancy, just done well. My wife and I used to treat ourselves to this place once a week (well, twice if we felt we really deserved it).

Creamy squash soup, salad, sauteed mushroom sandwich on fresh bread, glass of wine. That’s it. Their other location, tucked away more elusively in a different Hongdae neighborhood, scores points for its gnocchi, but you can’t beat the original. And this in a city where you can get the most delicious Korean food on any corner.

I love Gordo because the same people make the burritos every day and they know what they’re doing. It’s the only meal in SF that can fill me up for less than $7 and they’re just so damn good! I eat at least 3-4 of them/week and I can’t think of any other food or restaurant that I could eat so frequently without getting sick of it.

I’ve been eating at Gordo for over 15 years and I’m sure I’ll be eating there for the next 15. www.gordotaqueria.com
-Ross Borden, Founder 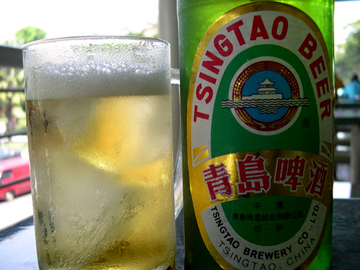 On “Ghost Street” in Beijing you can eat meat skewers of all kinds (from your obscure internal organs to straight up beef and chicken), gong bao chicken like you’ve never had it anywhere else, small plates of cucumber salad, thinly fried potatoes, sauteed veggies with garlic, veggie skewers in sichuan pepper paste, sizzling sichuan fish brought to you live in a bag for your approval…and did I mention the 5 yuan tall Tsingdaos?
– Sarah Menkedick, Matador Abroad Co-Editor 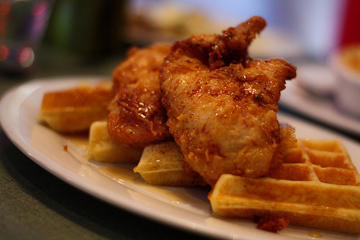 A bevy of different moules frites, foie gras and onions, and the best fried chicken and waffles are among the impeccable menu at Marvin, which is located in the historic Shaw Neighborhood on U Street, the heart of jazz and soul in the District.

Add to that an amazing rooftop beer garden and the speakeasy Gibson located around the back, and Marvin will easily be one of the most interesting, unique, and delicious places you’ll ever visit. www.marvindc.com
-Jason Wire,Matador Contributor At-Large 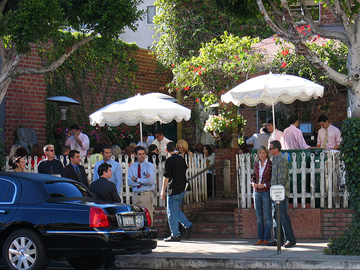 Photo of The Ivy in all its preppy glory: ChrisYunker

Oh, I know. It’s ridiculous. I’m supposed to be the guy who picks the tin shack in Laos, not the place with a $19 hamburger and valet parking. Somehow, though, I’m charmed by this little faux-house and the celebs that come here to have their paparazzi smeared.

I think that it’s the kind of place I dreamed of as a kid in Wallingford, CT, a place that I surely shouldn’t be allowed into, coming from a town full of townies.www.theivyla.com
-Tom Gates, Matador Nights Co-Editor 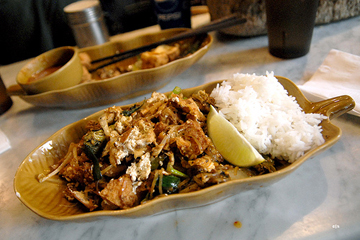 Heavily frequented by native Thai customers, a clear indication of its authenticity, its Pad Thai dish is sinfully decadent. Basil and sweet chili aromas wafting out of this joint hypnotizes you before you even step in, and the right amount of oils and spices in every single dish seals the deal.

Be sure to grab a frequent customer card to get some sweet discounts.www.neisha.net
-Lola Akinmade, Matador Goods Editor

In Argentina, a bodega refers to an old-school meal-hall, the kind of place with a set menu of just four or five dishes each day, usually simple and cheap and hearty. The Bodega in San Martin de los Andes is run out of a really cool house–three or four different rooms upstairs and down, most with long tables for family-style dining. Here they serve house red wine out of ceramic penguins. 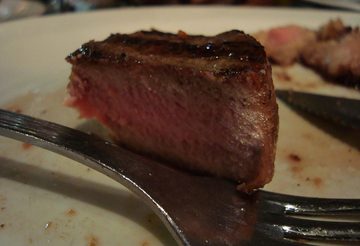 Whatever you get will be all-time and the chef and his wife will come check in with to make sure you’ve eaten enough, asking if you want a ‘chapa,’ which is like seconds, thirds, etc. I’ve had some super fat Bife de Chorizo here, Lomo, and also lentil stew. There’s always a vegetarian option, and like nearly everywhere in Patagonia the produce is locally grown–with La Bodega sourcing many of its ingredients from the garden onsite, straight up farm-to-table style.

After dinner there’s fresh-picked mint-tea. The sweetest thing about this place though is you can make reservations for dinnner at one of the private upstairs rooms with sofas, bean-bags, and coffee tables plus TV / DVD / VCR and movie selections from the video store. While you’re watching the film the muchachas will just slip in every once in a while to grab your plates, see if you want coffee, dessert, more mint-tea, or just more penguins.
-David Miller, Matador Senior Editor

This small, old cafe used to be a station master’s building on the tram platform. You can sit inside, outside the front which looks onto a serene Albert Park, or outside the back on the actual old platform and watch tram passengers get on and off on the trams’ regular runs.

The portions are healthy and the quality is fantastic. I recommend the pancake stack with mascarpone, berry compote, and authentic Canadian maple syrup (with a side of bacon, if you will) accompanied by a steaming latte.
-Carlo Alcos, Matador Trips Co-Editor 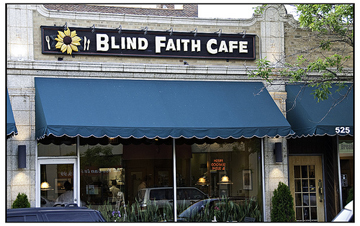 As a vegetarian, I end up eating a lot of pasta when I go out to restaurants with friends. Blind Faith Cafe is wonderful because it caters specifically to vegetarians and vegans – the menu’s completely meat-free. While their offering changes pretty frequently, they’re wizards with seitan, and anything that features it is probably worth trying.www.blindfaithcafe.com
– Adam Roy, Matador Sports – Contributing Editor

On Nelson Mandela Square in Sandton, South Africa lies this amazing seafood restaurant, Montego Bay. You can sit outside on the square and enjoy some of the best seafood from the land-locked city. While all of the seafood is exquisite, the langoustine was divine and something I had never quite experienced before.

Reasonably priced, great atmosphere, and excellent food makes this one of my favorite restaurant in the world. Montego Bay is certainly going to be on the list of places to dine when I go back for the FIFA World Cup in 2010.http://www.montegobay.co.za
-Lindi Horton, Matador Sports Intern 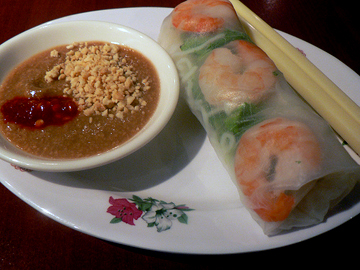 The Vietnam Kitchen in Louisville is frequented by many homesick Vietnamese from the neighborhood and it’s also the haunt of hipsters who trek to the South End of Louisville to gorge themselves on catfish in a clay pot or the perfect, plump spring rolls served with a sweet sauce garnished with peanuts you might want to eat by the spoonful.

Reasonably priced, the atmosphere may leave something to be desired as you’ll be dining under a florescent glow. If you’re there for the food, you won’t be disappointed. I knew a group of guys that got the number of their favorite dishes tattooed on. Hardcore. (Reviews and address here.)
-Kate Sedgwick, Matador Nights Co-Editor

My favorite restaurant is Parker Pie in West Glover, Vermont, a pizza pub in back of an old-time Vermont general store. Parker Pie is miles away from the nearest paved road, but it’s always packed with Northeast Kingdom locals eating pizza or drinking beer around a campfire in the backyard. www.parkerpie.com/
-Tim Patterson, Matador Man At Large

I cannot help it – I love Italian food, and I love this spot. It’s just in Covent Garden, and it’s a wonderful tiny cafe with all the vibrancy of Italy. I’m almost embarrassed to admit that my favourite Italian restaurant is in England, but I have never been disappointed by the wine, food or service here. I also really enjoy Burgoo, located out here in Vancouver BC on Main Street – their French onion soup is worth the wait. (Reviews and address of Giovanni’s here.)
-Alexandra Barrow, Human Resources Director

I hate it that my favorite restaurant in Chile is both pricey and Peruvian, but if that’s what it takes, so it goes. Astrid and Gastón plays with sweet and sour, textures and delicious ingredients. The quinoa-encrusted giant prawns are delicious, and the for dessert the fried rice pudding served with cinnamon ice cream might just make you cry.www.astridygaston.cl
-Eileen Smith, Community Outreach 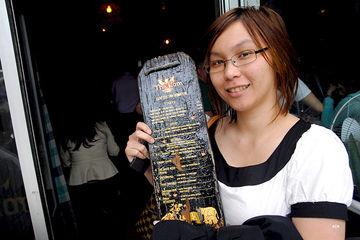 Line out the door, totally legit, hole in the wall Thai joint. Anyone who has been to Thailand will attest, those that haven’t, Thai Tom gives you a taste. It is hot, crammed, and the cooks work their magic right in front of you. Complete with dingy, Bangkok style bathroom! Fried tofu with peanut sauce is not to be missed.
-Joshua Johnson

If you look up gemütlich in the dictionary, this is what you should find. Vienna has some of the best cuisine of any capital city I’ve been to in recent memory, and Salzamt offers a wonderful blend of both the old world and modern Viennese kitchen.

The interior is a cavernous, vaulted space but the best seats are outside, in an old cobblestone courtyard next to one of Vienna’s oldest churches. The atmosphere is almost electric as violins in the distance fill the area. Although every course is fantastic, this is no time to skip dessert as the pastry chef really makes miracles come true. (Frommer’s Review)
–Andy Hayes 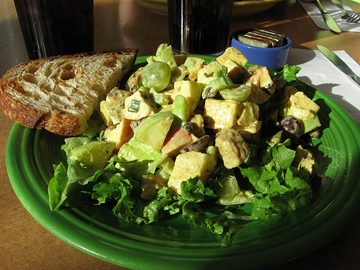 Ok, this may be a cop-out, but considering I’m the queen of needing gluten-free, dairy-free and preferably organic foods, I gotta say my favorite restaurant is actually the Good Earth grocery store in Fairfax, CA. I can almost always eat every single thing on their hot foods bar, including the scrumptious black bean, sweet potato and brown rice croquettes and cooked greens that are to die for.

Plus, they’ve got a bomb-ass curry chicken salad with raisins in the fridge, right up next to some coconut-yes I said coconut-tapioca pudding. When I’m living there, the staff sees me at least twice a day, and the store gets at least half of my yearly income. Good stuff.www.goodearthnaturalfoods.net/l
-Christine Garvin, Co-Editor, BNT

This place was a happening little open-air joint that served up simple chicken sandwiches that were shockingly delicious. It was the kind of place were you constantly heard people talking about it and would think “Nah, there’s no way it’s that good,” but then a single bite would transform you into a true believer.

The atmosphere was always chaotic and full of backpackers either coming to or from the beach. The owners also supplied paper and markers free of charge so the notes written in dozens of languages plastered the walls. Some humorous, some lewd, some insightful, it definitely gave it a fun vibe. (Mama Schnitzel’s on facebook)
-Frank Johnson 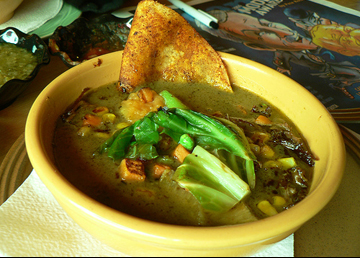 Favorite Restaurant is of course more of a moment in time than it is a place you can go back to (or recommend to a friend).

Back in the early divergence of Cuban currencies, there was a ropa vieja at a homey paladar overlooking the Malecón, now lost in the notebooks. Locos con mayo at the market in Puerto Montt. Lamb tajine in Ouarzazate. Four courses of goat cheese at the chèvrerie above the sweltering Loire.

But today, for lunch, the way I feel, if I could have a seat anywhere in the world, it’d be in one of the naugahyde booths at Horseman’s Haven, way down on Cerrillos, before a bowl of Level 1 green chile and a pile of warm flour tortillas. And a cold Budweiser. (Reviews and address here.)
-David Page, Contributing Editor

What did you think of this article?
Meh
Good
Awesome
Bookmark
Posted In
Restaurants

The most interesting dishes in Atlanta right now

Your bottomless Mimosas are a scam, regardless of where you eat

Carbonized bread and fish sauce: Eat like a doomed Pompeiian at this London restaurant