Wilko, the ‘gastro-pub’ on the corner of University and Park Avenues in Tucson, AZ, is haunted. In fact, the building itself may be a paranormal trap.

That said, the cheese selection is great and so is the veggie pizza.

I walked through Wilko’s double doors feeling like Alice in Wonderland. Everything in the dining room is expansive. Oversized paper lanterns cast a warm, yellow light on customers’ faces. The room is long and airy, with high-ceilings and walls of windows.

The decor inspired my senses at first, but inspiration piddled away and I just felt old – old beyond my time. Old like a drying sponge — supernaturally old.

It had nothing to do with the food or drinks or the service. All three were above average. The feng shui of the space gave rise to haunting sensations that took over my eyes and ears. 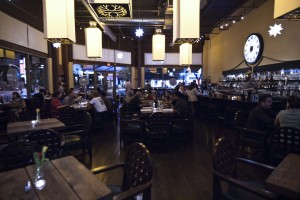 The paranormal energy in Wilko's dining room seems to eminate from the massive clock at right. Photo by Andrea K. Francis.

The restaurant siphoned my life-force away. Imagine the unholy shock in that realization. Put yourself in my shoes as a reviewer, torn between screaming, running for a church and complementing the cuisine.

I would return to Wilko for the pizza, but only if I wanted to feel deathly alone in a large, spirit-infested room, where the massive clock is king. Throughout my meal, its ticking arms swirled the yellow light, hard edges and burnt metal of the restaurant into a situate of darkness.

But it’s not as though Wilko didn’t have its pleasant, tangible aspects. 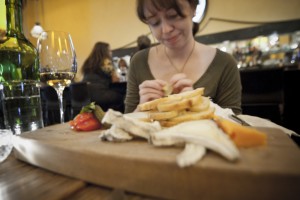 Melissa Goodrich samples from a pile of aromatic cheeses at Wilko. Photo by Andrea K. Francis

Wilko owner, Peter Wilke (Why change the e to an o Peter? Why?) has two other restaurants in town: B-line and Time Market. I’m a sucker for B-line’s homemade four-berry pie, so I had to give his latest venture a shot.

The building used to be a high-end convenience store, said waitress Liz O’Connor.

There’s a set of glossy refrigerators at the back of the restaurant. I wondered if they doubled as portals to the 1930s, where the bartenders got their high-waisted pants and mustache wax. The portal idea gained weight as the night progressed.

I was eating light, so I stayed away from what Chef John Fulco talked-up as the big-sellers: the jerk chicken sandwich and Gruyere cheeseburger. An allergy forced me to pass on the sausage too; the only local food item. 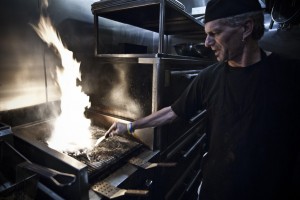 Local products are the missing link in Wilko’s eclectic menu. The closest wines come from California, New Mexico and Arkansas. It’s the Sonoran desert, but 20 vintners two hours away are pulling wine from prickly pears and desolation.

Someone, please, shoot these geniuses a friendly email. (Or possess their bodies with banshees and force your bidding upon them. Whatever’s easiest.)

My friend Melissa and I ordered two glasses of Russian River Valley chardonnay and the $16 “Pantry cheese board,” which comes with four “Artisan” cheeses.

Our cheeses were a winning selection: the tangy Bandage-Wrapped Cheddar from Modesto, California; the sharp Mimolette from Nord Pas de Calais, France; the milky Sofia from Greenville, Indiana and the creamy Bermuda Triangle from Cypress Grove, California.

It was worth the $4 per hunk to watch Melissa eat like a mouse. She took a liking to the hard cheeses, which she nearly sent flying with every slice. Between nibbles, she positioned each bite on a cracker held in front of her heart. 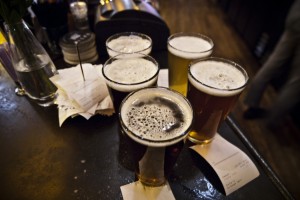 Ouch!: Pints at Wilko can reach $7.00, double what most bars charge. Photo by Andrea K. Francis

Cheese-cutting was the noisiest thing in the restaurant. The knives chopped and the clock ticked and the ectoplasmic forces took hold.

Twenty or so customers sat at tables along the edge of the dining room, murmuring to their dates — about how the homemade apple butter melted in your mouth or how the air was a little off.

This is where things got weird. The cheese chopping ceased and I was immersed in phantasmagoria.

In crystal-clear flashes, my vibrancy was absorbed, paranormally, by a dried-up desert hag. Her mind echoed the wish to live for 300 years.

One-way conversations are so awkward.

I guzzled my $8.50 glass of wine. For the record, it wasn’t a healthy pour. The bartenders, because of their wardrobes, felt the Great Depression upon them and worked to conserve.

The time for hard liquor is often marked by such visions. I beckoned to the bartender with the curliest, greasiest mustache. He made my blood and sand strong and smooth; perfect for the last few bites of the dense, marbled Sofia and compartmentalizing otherworldly voices. 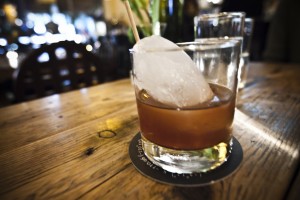 The whiskey drink came with a block of ice, which was awkward but fun to swirl in the glass. Should you order a blood and sand at Wilko, amid the psychic onslaught, be sure to request a straw. Otherwise, the ice block will smash your lips and nose and the cocktail will spill on your dress. It happens, but it’s not classy — unlike the bartenders and the era from whence they came.

We skipped the local sausage to try a vegetarian dish—the $14 “Murcia” pizza. It was a flatbread with marinated cherry tomatoes, toasted piñon nuts, drunken goat cheese and fresh mint. It came out hot and could have fed three, especially three already full of fancy cheeses. 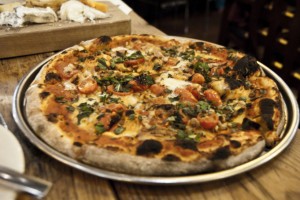 The fresh, floppy pizza could be the best in Tucson.
I tried to decipher the source of the “drunken goat cheese” to occupy my thoughts and quiet the hag.

Did they get trashed with the goat before they milked it?

Why force an animal to drink alcohol when you can inject it?

Why was the clock face suddenly overlaid with Satan’s goat-visage?

A piñon nut is Spanish for pine nut, which can be found at roadside stops in New Mexico. The ñ in piñon gave the pizza a deeper, nuttier taste than just any old pine nut, elevating it far beyond pies served by competitors like Empire Pizza downtown.

The piñon also lifted the pizza beyond the realm of youth-sucking voodoo. I fear the day I see a Wilko pizza outside Wilko.

I’ll know then that Wilko, the hag, and I are bound by fate. I’ll know I lost years of my life to a hex.

I fear that day because I’ll probably still reach for a slice.

Tagged
Humor Restaurants + Bars
What did you think of this story?
Meh
Good
Awesome

11 Tucson Food and Drink Experiences That Go Beyond the Taco

9 Outdoor Adventures To Have in and Around Tucson, AZ Before You Die

Day of the Dead Walk in Tucson