“And neurotic control freaks,” added another artist, smiling from the audience.

It was closing night of Montreal’s first-ever One Man Band Fest. The venue was L’Envers, a little jazz place with a homey, living-room sort of air to it except for the fridge of St. Ambroise being sold in the back corner.

Eighteen artists performing over three nights put this festival among the biggest of its kind in North America, and while the traditional “one man band” has a well-defined and almost a clownish image (think Bert from Mary Poppins), these artists displayed a variety of setups from traditional to more digital and electronic forms.

Two days earlier I was sitting behind the merch table on opening night. Sales were slow this early in the evening, but I was joined by Tyler, who performs his brand of electro-indie under the name Super Fossil Power. I asked him about his choice to perform alone — after all, I’ve always found playing music with others preferable.

Tyler explained how he was forced into it by a combination of creative differences and commitment differences: His previous band had split two ways, leaving him and another musician, who then became too busy to perform.

“It’s really nice to have complete creative and logistical control,” he said. “You can write whatever you want, practice any time you want. But yeah, playing in a band, there’s advantages. While practicing you might play a little riff or something and not think much of it, and somebody else will go, ‘What did you just do? That sounded amazing,’ and you go from there.

“Then there’s the gigs themselves. After a gig with a band, you sit around over a beer going, ‘You remember that part where (whatever happened)?’ ‘Yeah yeah, ha ha ha, that was great!’ Without a band, you maybe get a ‘good job’ afterward from a couple of people in the audience, and you’re left to pack up your stuff alone,” Tyler finishes in a slightly disappointed tone. It’s little wonder; even audiences feel and love the dynamics between band members during a set.

“For me, this is about more than just music; it’s about not waiting for the fucking green light. If you wanna do it, go do it, and if you fuck it up, well, so it goes…”

The following afternoon, I attended a one man band workshop given by Jon Cohen, the festival’s dreamer and director, and Jenn Mierau, a volunteer. Both are in the festival lineup, and both have become one man bands by paths similar to Tyler’s. Jon played guitar on the Montreal music scene for many years with multiple bands, some of which he left because his creative aspirations weren’t being satisfied, and others where bandmates had left, perhaps for similar reasons. Finally, his last band produced a fairly successful record and were set for a lengthy tour, but his bandmates decided against it, given the stressful and time-intensive nature of touring. Starting from square one with another band was a discouraging prospect, so Jon went one man (The Jon Cohen Experimental).

Similarly, Jenn played with numerous musicians in her native Winnipeg before many of those began to relocate. Ultimately, she didn’t want to have to rely on others to play music, and began to play alone (Jenn Mierau). However, she takes a somewhat different view from Tyler’s on the loneliness aspect: “It’s great to tour with people you know, and the support is wonderful, but when you’re alone, it kinda forces you to really talk to your audience. Getting your audience’s perspective on your music is huge.”

One of Jon’s favorite techniques is to lay down his instrumental tracks and then come off-stage into the audience. “Yeah, like Jenn said, do you ever wonder what you sound like to the audience?” he said.

“Also, once you’re out there, you can just kinda croon there to yourself…” he stopped for a moment, closing his eyes and bowing his head over the two mics he clasped to demonstrate, “…or sing directly to people, right in front of them, looking them directly in the eyes. Some people like it, others feel uncomfortable, but ultimately even those will question why it’s making them feel uncomfortable in the first place. It’ll stir something inside of them, so I’ve done what I’ve set out to do.”

He first tried this somewhere on tour, almost on a whim because “it doesn’t matter if you completely bomb there; when’s the next time you’ll be playing Golden, BC or Trier, Germany? You go out there, give it your all, and if you bomb, you have the next night, and the night after that…” 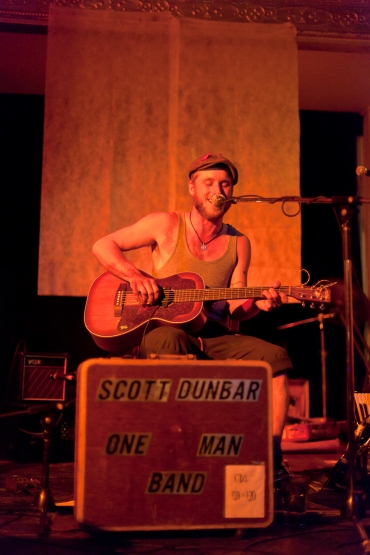 Jon and Jenn both use looping pedals, which have evolved in the past 20 years to become a common weapon in the one man band’s arsenal. For Jon and Jenn, it’s also what separates them from being simply a solo act and lets them consider themselves a band. “For example, for me, the classic man-with-guitar is a solo act. Nothing wrong with that, but I wouldn’t call it a band,” Jenn said.

“Yeah, it’s really one person doing the work of like 3, 4, or 5 people, and some of the technology available today is amazingly conducive to that,” added Jon.

More so than with traditional musical instruments, playing becomes a balance of what the technology offers and what the artist can do mentally and physically.

Both Jon and Jenn loop live, meaning their loops aren’t prerecorded; everything they want to use in a song later, they actually have to play at least once. They can then layer different loops of different lengths, or store loops that they’ll need again later. As such, the looping pedal allows them a great deal of complexity, but keeping track of all those loops is really where the one person does the work of 3, 4, or 5.

However, as so often in art, “mistakes” can become part of it: “playing organically,” as Jon called it, and taking whatever you get out of the technology on that particular night and running with it, even if it’s not what you intended. “Performing in a standard band, you have the dynamic between the band members, and audiences love that,” he said. “In a one man band, you obviously don’t have that, but you gain a different dynamic with the looping pedal. The audience doesn’t quite understand it, but they can sense that there’s a unique sort of intimacy there with that technology.”

After rap legend Jesse Dangerously’s set, Jon was the last act on closing night. He played his first song, and then paused for a few words. “I’m thrilled that this [festival] came together, because honestly, as a musician, I’ve learnt more in the past couple years than in the 15 before that. For me, this is about more than just music; it’s about not waiting for the fucking green light. If you wanna do it, go do it, and if you fuck it up, well, so it goes…”

Tagged
Travel Montreal, Canada
What did you think of this story?
Meh
Good
Awesome