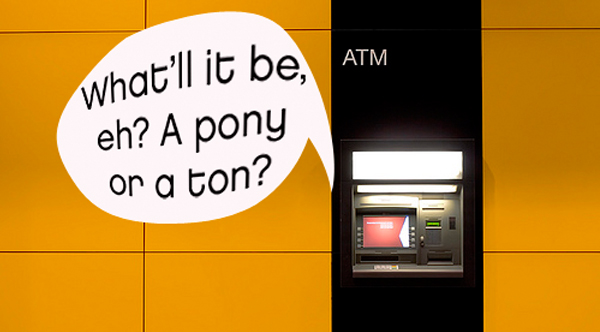 Photo: megawatts85 with mods by Kate Sedgwick and licensed CC

Lor’ luv a duck.? Those not-so-Cockney geezas Bank Machine ‘ave only gawn and given their East Laaandan punters the option of taking out their sausage and mash in a Cockney accent. Cor blimey eh! Who’d a fought it?

TRANSLATION: The ATM company Bank Machine is offering their East London customers the option of using Cockney rhyming slang to withdraw cash for a period of three months at selected cash dispensers.

Yep, you read correctly. Users selecting “Cockney” as their preferred language are thus confronted with a Charlie Sheen that asks if you’d some moolah for ya sky rocket. It then asks for your Huckleberry Finn and how much you’d like to withdraw, among your options being a Speckled Hen. Oh, and if the machine tells you it’s contacting your Rattle & Tank don’t be alarmed — it just means it’s getting in touch with your bank.

While this novel approach may be entertaining, what of those who are unfamiliar with the east London “lingo”? Might not tourists end up in a right load of Barney Rubble if they press the wrong key after a few too many Vera Lynns?

Do Bank Machine — who in fact hail from Scotland — really believe their ATMs are helping keep regional dialects alive in Britain, as they claim? Or are they merely trying to coax more users into paying the extra £1.50 most of their machines charge? At least Facebook were tongue-in-cheek when they introduced Pirate as a language setting.

As Roy Parker, a 62 year old Cockney commented in London’s Telegraph newspaper: “Real Cockneys don’t have bank accounts or all that palava…they put it under the mattress.” Could be he thinks they’re a bunch of merchant bankers. 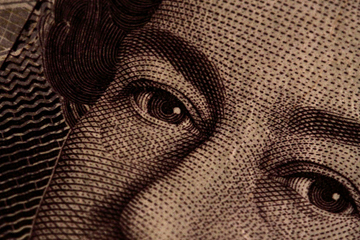 For many questions and answers about Cockney rhyming slang, this is a good place to look.

Planning a trip to Great Britain? Be sure to check out Eva Holland’s Budget Travel Tips.

Feel like writing about your experiences traveling in England? Start your own blog at Matadortravel.com and start connecting with other creative travelers.

Tagged
Culture London, United Kingdom
What did you think of this story?
Meh
Good
Awesome

The new US Olympic & Paralympic Museum honors athleticism, accessibility, and big dreams
30 awesome Japanese idioms we should start using in English
‘Accidentally Wes Anderson, The Book’ is a nostalgic mix of colors and symmetry
Rajasthan’s epic camel festival is two days of fur-cutting, dancing, and races
The most popular last name in every country in the world, and what they mean