WHEN I WAS A KID, the extent of Newfoundland and Labrador’s food culture revolved around all its absurdities. Cod tongues. Seal flipper pie. Moose burgers. “Brown food,” or deep-fried everything.

But over the last couple of years, the restaurant scene has done a complete turnaround. While the small-town diners with deep-fried foods and motherly servers in scrubs still play a beloved role throughout the province, things have changed. Like, a lot.

I first heard of Raymonds maybe two years ago. It was an enigma, a coveted place, a retreat for only the most serious of food eaters. High class, gourmet, innovative. They started winning awards, like Canada’s Best New Restaurant in enRoute, and the Award of Excellence from Wine Spectator. But a writer’s budget doesn’t typically grant such dining luxuries.

Most Newfoundlanders have often felt that if something came from “away,” it was better.

Then Jeremy Bonia invited me to the restaurant for a seven-course wine pairing menu extravaganza. I invited my cousin Nancy, both of us total amateurs in the gourmet scene.

We started out with fresh churned butter and homemade bread. Bonia, our wine connoisseur, served us champagne because there’s “no better way to start off a meal.” Agreed. Then came duck prosciutto chicken liver mousse with mandarin orange, chardonnay vinaigrette, candied walnuts. A Saint Simone oyster from New Brunswick. Beef tartar with parmesan, and a pickled quail egg.

That was just the first course.

One by one, the courses rolled out. Radish salad with arugula, arugula pesto, lemon and garlic aioli, paired with Anselmann Riesling. Arctic char with spaetzle, sweet corn and snow crab, paired with Gitton Pouilly Fume 2008. Striped bass with lentils, cherry tomatoes, bacon, and sherry vinaigrette, with a Guigal Condrieu 2009. And to top it all off: duck breast with squash puree, white beans, and pine nuts, and a glass of Lynch Moussas 2003 Pauillac. 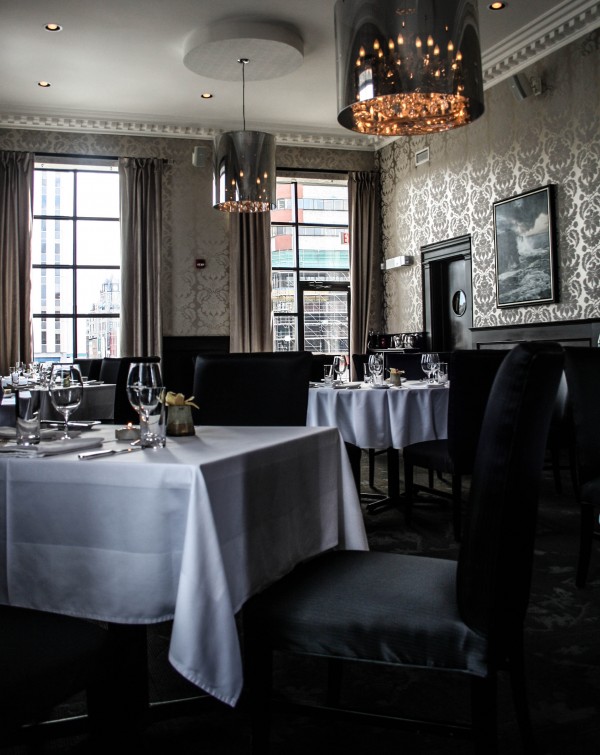 The food was presented to us in a manner that suggested Nancy and I were royalty, with Bonia popping in to pour us a new glass of wine to complement the food. I admitted to him I knew very little about wine, being a beer gal, but he walked us through the selections to show how each one complemented the flavors. Anselmann Riesling, with its acidic, sugary notes to bring out the fresh tastes of salad; full-bodied Guigal Condrieu to match the ocean flavors of fresh bass. It just made sense.

Eight glasses of wine later, my final note comes from Nancy, while giving bathroom directions: “Go towards the door, turn right, and if you see miniature cows, just know they’re not dogs. You’ll see what I mean.”

It was four hours of the most epic meal experience of my life, made even better by good company and the view of The Narrows. It also marked the beginning of my obsession with Newfoundland’s food revolution.

This revolution is bringing down outdated Newfoundland stereotypes of being a “have-not” province with little to offer the rest of the world. At least, that’s my definition. Newfoundlanders have always known how awesome this place is…everyone else is just catching up. I blame the Internet.

And because we’re people and most people are easily influenced by their surroundings, most Newfoundlanders have often felt that if something came from “away,” it was better. Shopping. Television. Talent.

At some point, somebody paused a moment and said, “Wait a second, we’ve got some pretty awesome stuff going on here in the province.” Like farmers, cheese-makers, and chocolatiers.

Bacalao Nouvelle Newfoundland Cuisine was one of the first restaurants to break into the gourmet scene with Newfoundland influences. I had pored over their menu online in the past, intrigued by the creative twists on food I had grown up with. Everything they do is Newfoundland focused — the name itself means “salted cod” in various regions throughout the Mediterranean (the man who discovered our island over 500 years ago, John Cabot, was Italian).

It was like a five-star version of every Sunday dinner I’ve ever had.

I dined here with Nancy Brace, the head of the Restaurant Association of Newfoundland and Labrador. Together we sampled traditional eats offered anew: Jiggs Dinner cabbage roll (salt beef, turnip, potato, and carrot rolled into a cabbage leaf), with a side of peas pudding and a pot liquor shooter. It was like a five-star version of every Sunday dinner I’ve ever had. (Sorry, Mom.)

I also ordered the caribou medallions in partridgeberry sauce. The caribou came all the way from Labrador, and it was the first time I’d ever tried it. You know what’s delicious? Caribou, turns out. There are local options for everything at Bacalao. The beer is local. The rum is local. Even the “Bacalao Blend” coffee was made especially for the restaurant by Jumping Bean, my most favorite coffee maker in the whole world. Try their Screech coffee if you ever get a chance.

Before leaving, I asked Ms. Brace why the sudden movement in the province’s cuisine. “There’s no competition,” she said. “The economy has improved, and our chefs just like working together.”

When the Bacalao team was invited to participate in the Canadian Culinary Championships in Kelowna this past year, eight chefs from various restaurants around town pulled off “Occupy Bacalao” — effectively keeping the restaurant open while the Bacalao chefs competed their hearts out on the other side of the country. 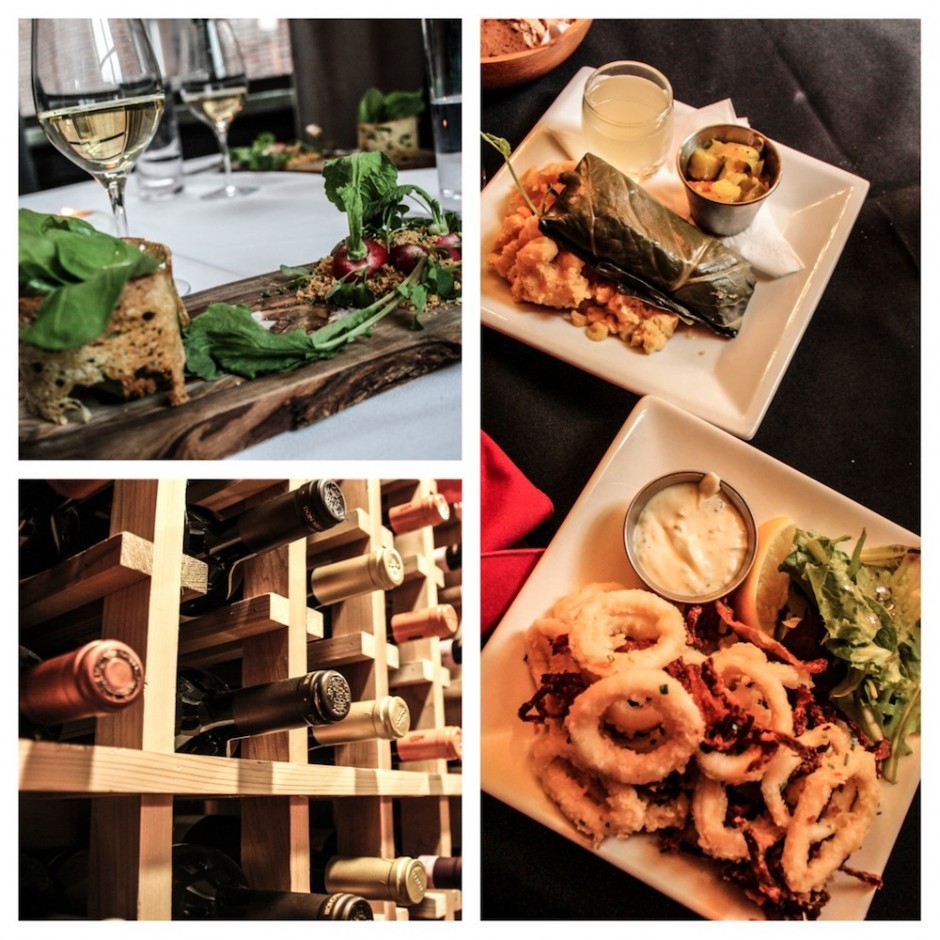 My food quest led me next to Atlantica, a restaurant located in Portugal Cove, about 20 minutes outside St. John’s. It was my first real dining-alone experience, and indulgence was on the menu.

I tried the smoky pork cheek “poutine,” with spaetzle, pickled cheese curds, onion chutney, and truffle jus. This was followed by pan-roasted local halibut, and a bakeapple cheesecake martini or two. For those unfamiliar with the bakeapple, it’s a type of berry only found in northern regions.

By the time I made it to Chinched Bistro, the irony of my lifestyle was well affirmed: me, scraping pennies to pay my rent and bills, embarking on expensive $100 meals…all in the name of research. A strange juxtaposition to the usual “pasta and sauce” that’s become my staple.

Chinched, like the other restos, has a menu influenced by local products. The cheeses come from Five Brothers Artisan Cheese, a business actually started by one of my good friends (and neighbour) Adam Blanchard. The chocolate comes from Newfoundland Chocolate Co., a place I had reviewed a year earlier for an AOL article about chocolate tasting. I admit I may have approached owner Brent Smith with my own self-interest in mind.

Chinched is well known for its charcuterie and handmade desserts. My friend Maggie and I sampled the dark chocolate and hazelnut tart, and house caramel bacon ice-cream. Bacon ice-cream. Yes, it’s a real thing.

When I’m back to living like a pauper, there are other food options. The food truck scene here is…well, battling its way through city restrictions in St. John’s. Muhammad Ali’s tried opening their business as a late-night food truck to service the hordes of hungry partiers during after-hours, but were shut down due to lack of electricity available to power the trucks. The guys behind Muhammad Ali’s have been fighting fiercely to finally bring some Middle Eastern street food to the city, despite all the roadblocks. Now you can find them operating out of The Sprout on Friday and Saturday nights. Their $6 falafel beats overcooked hotdogs from George Street any day, and I literally do not go home on the weekends without one. Even if it means bumming cash from my friends.

The only real successful truck to come into play this year is the awesomely titled Long Dick’s Sausage Emporium, named for the owner Steve Smith’s uncle who claimed the Long Dick nickname. No, it doesn’t have to do with physical endowment — apparently there were several “Richards” in the owner’s hometown, so they were given alternate titles: Long Dick, Short Dick, and Goat Dick. I kid you not.

I had initially thought that the food revolution was self-contained, only flourishing within St. John’s.

I met Smith one day while snapping photos of his truck in the street. He was still waiting to open, having to deal with a yearlong battle with Newfoundland Power for a permanent power supply. He’s since come out on top and now offers over half a pound of German sausage cooked in a broth of onion and spices, served on a baguette with your choice of toppings.

“Thanks!” I responded, and as I turned to leave, I whispered to my friend: “I can definitely handle the 9-inch.”

“I heard that,” Smith sang out.

Other limitations facing the food revolution are a bit more amusing, like the future of our beloved indigenous sheep. They’re raised on Sheep Island, carried there by boat every summer where they can graze free from predators. The issue is that there’s currently only one traditional sheep farmer, and he’s not looking to expand. To make matters worse, up-and-coming farmers can’t find available land to start their own sheep enterprises.

People seem to make do, though. I had initially thought the food revolution was self-contained, only flourishing within St. John’s. But several trips over the past two years have had me off exploring corners of the province I didn’t expect to explore, and finding food places other than the greasy takeout joints where ladies and gents hover over deep fryers with hairnets.

In Bonavista there’s the Social Club, with the only commercial wood-fired bread oven in Newfoundland and Labrador. I’ve had incredible $9 fish cakes at Java Jack’s in Rocky Harbour, and thick, delicious steak at Nicole’s Café on Fogo Island. In Twillingate, I ate at the newly opened Canvas Cove Bistro: Quidi Vidi’s Iceberg beer shrimp salad, a sampler of lobster chowder, and Screech-In Banana Flambé, made with the famous (infamous?) Newfoundland Screech Rum.

When it was time to leave, I discovered the venue was temporarily “cash-only.”

“It’s okay, you can come back and pay tomorrow!” Tara, the waitress, told me.

Tagged
Restaurants + Bars Insider Guides Newfoundland and Labrador, Canada
What did you think of this story?
Meh
Good
Awesome
✖
travelstoke
Download the mobile app
stoked by