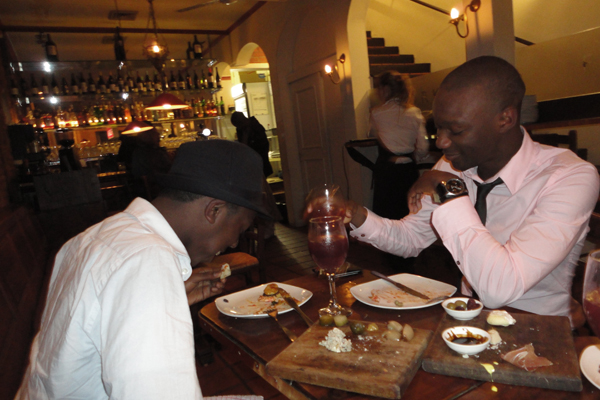 Author (right) and friend at Fork (this and all photos courtesy of Claudio Silva unless otherwise noted).

Cape Town, South Africa was an assault on my senses.

FROM THE MOMENT I stepped out of the Cape Town International Airport and into the brilliant sunlight silhouetting Table Mountain, I knew that my stay here would be different.

I spent about five weeks there during the World Cup, and then a couple more days in late August long after the crowds had gone home. By no means definitive or exhaustive, the list below highlights five of the sexiest haunts in Cape Town, places where you can enjoy a sundowner and welcome the night after a day well spent. They range in location from rambunctious Long Street to Victoria Road in Camps Bay to the semi-residential Kloof Street.

Located on Kloof St. next to the highly rated Saigon Restaurant, Asoka Bar is my favorite bar in Cape Town. 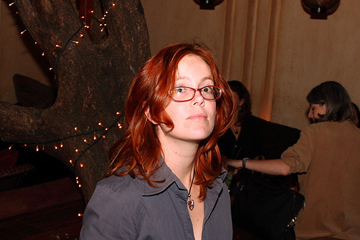 Dimly lit and bustling, it’s decorated in a pan-Asian style that invokes India and Southeast Asia, and a feeling of peace and tranquility. At its center is an ancient olive tree, ornamented with wraparound Christmas lights beneath an open roof.

The cocktails are exquisite. The bartenders will bring you a glass that looks filled with something like a smoothie, complete with fresh fruit and herbs, but at first sip you’ll note it contains a healthy dosage of alcohol. During weekends we found it very hard to get a table and decent service, but during weekday nights it seems like Asoka Bar is your own little secret. Keep an eye out for their live jazz nights, which usually occur midweek.

When you think of Cape Town cuisine, tapas don’t readily come to mind. But Fork will quickly put that notion to rest. With its exposed brick walls, candle lighting and chilled, icy sangria, Fork is as close as you can get to Spain this side of the equator.

Its South African chef peppers the menu with local fare, including kudu and ostrich dishes and fresh ingredients bought from the market down the street; Fork’s cuisine is therefore a delicious meeting point between Spain and South Africa. We sat in the restaurant’s upstairs section and people-watched from the patio as we savored our scrumptious small plates.

Set in Greenpoint, Cape Town Stadium’s home, Buena Vista Social Café highlights Capetonians’s infatuation with Cuba (there are other Cuban-inspired venues in the city, such as Cape to Cuba and Cubaña). 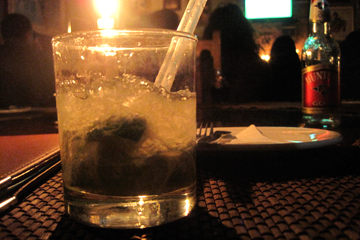 It’s a fashionable two-storey structure adorned with images of Che Guevara, and there is Cuban cigar smoke wafting through the air. The cocktails and Latin-inspired menu are delicious, and during the World Cup the atmosphere during game nights was electrifying.

It was here that we saw Brazil lose to the Netherlands amidst a sea of orange jerseys. This venue has free salsa lessons every Sunday, and when you step into Buena Vista later that night and try to maneuver your way between laughing, good-looking salsa dancing couples, you might as well be in Havana. 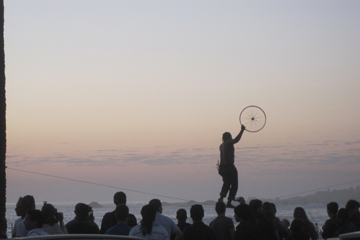 The neighborhood runs alongside expansive, sandy beaches, numerous palm trees and trendy bars and restaurants; Camps Bay is also the setting for Café Caprice, a restaurant by day and lively watering hole by night. I went there for lunch one day expecting drab and uninspiring food but instead had one of the best pasta dishes of my life, overlooking the waves of the South Atlantic and surround by excellent company.

Go there at night and the scene is sexy and lively, full of well dressed Capetonians and foreigners alike.

There are many clubs and bars on Long Street, among them the always happening Joburg, Pretoria, and Chrome (just off Long St).

But The Waiting Room offers something out of the ordinary. After going up the seemingly endless flight of stairs you enter its dimly lit main room and the funky music engulfs you. The crowd is young and the dance floor intimate. There are gorgeous people sitting on plush couches, a balcony overlooking the debauchery of Long Street, a DJ spinning on one corner and a small and crowded bar on the other.

The real surprise in The Waiting Room is its upstairs, filled with more loungey areas and a roof deck where its possible to have a decent conversation and a kiss or two once you tire of the dancing downstairs.