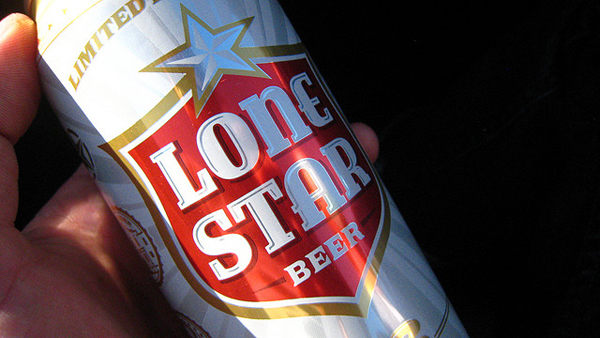 Now this, I know. Photo: mrgarin

Matador Trips editor Hal Amen pokes around his new hometown’s biggest party, and does it all wrong.

I’m eating at Cazamance, one of the semi-permanent food trailers + garden seating on Rainey Street. This one serves African — curried veggies, yassa chicken, lamb sausage. Somehow I end up with the hummus/olive/feta salad on bunny chow…I could be at freaking Milto’s.

The guy at the next table is destroying his brisket and typing into a MacBook with an AppSumo sticker on it. He flags the server: “Which way to the Hilton? Is it by all those buildings over there?” He waves his hand at the entirety of downtown. The server smiles, shrugs, and nods.

“That’s okay,” AppSumo says. “I’ll find it.” He gets up, throws the MacBook in a 60-liter rucksack, and takes off into the dark, a pilgrim on a company account.

As I watch him disappear around the fence, I think: It’s on.

“How do you do this South-by thing anyway?” I ask my wife’s cousin-in-law, in town to work his company’s interactive booth. Here for the first time, but clearly much less noob-tastic than me.

“You find someone who knows how to do it and apprentice yourself,” he says.

I look away, out the side window of the car, at the badged posse overflowing a corner sidewalk on Congress, waiting to cross, and think: I’m screwed.

I’ve caught films before, but I’ve never had a badge. This year, the plan was to get a pass, but that didn’t work out either. So I’m officially third-class, standing in the single-ticket line outside Alamo Drafthouse Lamar. It’ll be another hour until I find out I can’t get in to see the Medium Shorts.

“Doesn’t look good…badges just rounded the corner.”
“You never know, I got in yesterday.”
“My roommate saw Conan O’Brien last night.”
“Heard John Oliver was at a club on 6th.”
“Man, this sucks. First come, third served.”
“Hey, did that chick just cut?”
“Michael Cera’s band is playing a secret show at 3rd and Congress.”

I’m the next to go in when the girl in charge comes out: “Capacity.” Maybe it’s karma for all the bitching, I think as I walk to the car. If so, I earned none of the good stuff standing in the sun for an hour. I’ll return that evening for A Matter of Taste and be denied a second time.

Driving out of the parking lot, I think: Lamar is dead to me. 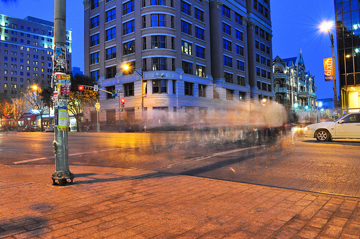 The corner of 6th and Congress, photo: Dave_B_.

My wife wants to go to the BurdaStyle/Etsy fashion show at Venue 222, so I go too. Nighttime South-by 6th Street sounds freaky, but we drive down and it’s all right. We even land a street spot a few blocks away.

With a balcony view of the 15 models working homemade designs onstage, this is actually a pretty successful go. There’s a girl in a leopard-print tunic-mitten-hat combo who does the model strut in slowmo. I laugh and chew the ice from my vodka tonic.

Driving up Trinity afterwards, we see a parking attendant jamming out on an archtop right in the lot entrance, like he doesn’t give a shit he’s just charging people money to park their cars.

I think: Wish I could sew. And jam out in public.

My RSS for EastAustinite pays off. Today it’s given the headsup on a Pi Day pie fight. Austin’s going for the record: 1201 pies thrown.

Feel like this is my turf, too. Eastside. But the fb page says 4-7, and by the time I roll up at 5:30, pie cream is already being hosed out of stringy hipster beards and short black hipster dresses.

“Hey, did we get the record?” I ask a fry cook who’s stepped out of the Bits and Druthers trailer for a smoke.

“Beats me,” he says. “I was kinda busy. All I know is a bunch of dudes came up to order food all covered in berries. Smelled good.”

I settle for onigiri and drop two bucks in the can that says “All tips to Japan tsunami relief.”

It’s a moment to step back: The world is bigger than this. 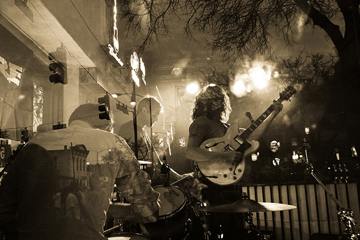 There’s music everywhere. “My turf” around Eastside Drivein is overrun with it. It’s on the outdoor patio at Zen, far up Guadalupe from the main action. Michael Cera played bass in a parking lot at 3rd and Congress, apparently.

I don’t know any bands. I’m not discriminating. I know I could like it all. Consequently, I’m completely overwhelmed. Not even Lindi’s 10 Free Music Parties can save me. Neither can the confessions of Ann Powers.

Here’s what I end up doing: Skank Family is throwing down an unofficial showcase. It’s about 500 feet from my house. I walk over and listen to some really young kids sing about silly things and play some decent guitar. I watch other kids walk around in really tight solid-color jeans and Hecho en Brooklyn t-shirts. I meet my neighbors. Then I walk home.

This is it: Austin, I feel beaten by you.
But, you know, we’ve all gotta start somewhere.

Ever been beaten into noob-ness by an event, city, or travel experience? Tell us how it feels.

Tagged
Events Austin, TX, United States
What did you think of this story?
Meh
Good
Awesome

Major events around the world canceled due to the coronavirus