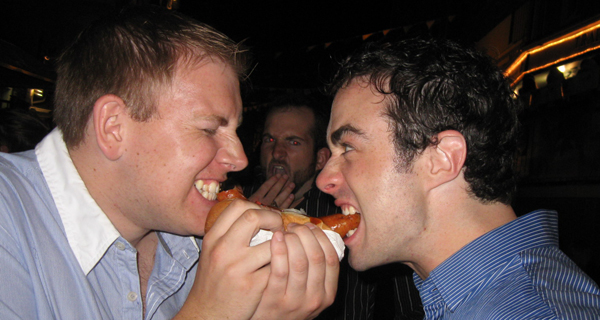 Photo of mildly homoerotic hotdog feud and the rest of the photos in this piece courtesy of the author.

In downtown St. John’s, situated just above the harbour, lays the street with reputably more pubs and bars per square foot than any other street in North America. This is George Street, where morality and your liver come to die.

Whether you’re a townie (born and raised in the city), a bayman (from the wilds of isolated Newfoundland) or an outsider, George Street has something for you – and I’m not talking about herpes, necessarily.

On the weekends, people begin milling around the street sometime shortly after supper. Business suits take drinks on the ritzy patio of the Martini Bar, while a more casual crowd orders nachos on the Sundance Sundeck.

As the sun sets, vendors shuffle their hot dog carts and french-fry stands onto the street, ready to seduce visitors with promises of greasy goodness and merchandise of questionable nutritional value.

Tip: Do not eat the street meat. Ever. 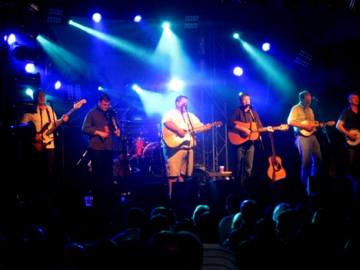 Starting around 10:00 PM, the party gets started. Pubs such as Greensleeves and the Rob Roy set up for live entertainment which includes local bands cranking out accordion and fiddle music and solo artists.

Regardless of the venue or entertainment, I have never known any band or musician to be acknowledged with anything except loud hollers of happiness, jig stomping, and hip grinding on the dance floor. Grab a beer, and join the party.

Unlike many places in Canada, the bars in St. John’s stay open until 3:00 AM. If you’re in the mood for dancing and being felt up by the opposite sex, check out Konfusion, where the confusion extends beyond spelling. If being mauled by sweaty college kids isn’t exactly your thing, head over to Dusk Ultra Lounge for sexy lighting and an older, more diverse crowd.

How to Maximize Your Time on the Street

The party does not stop on the weekend. For residents living in downtown St. John’s, hearing loud music and drunken assholes at all hours of a weeknight is a real hassle (unless you’re me, who considers this clamour a lullaby). Most bars and pubs have a specials night, such as Turkey Joe’s which hosts Lady’s Night on Sundays and The Dock which offers 3-4-5 beers (three beers for $5) on Thursdays. 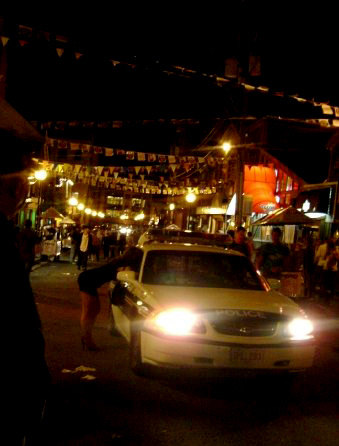 Woman of the Night Taking her Evening Constitutional

When you want to get so hammered that Toothless Tom becomes your best friend and you eventually go home with a stripper, you need to attend a George Street event, when the street is closed down from end-to-end, and party-goers pay a cover fee for the entire street. This means that a $15 charge allows you to wander from bar to bar in a happy, drunken stupor for the entire night.

You can even pour your drinks into a plastic cup and socialize freely between bars. Assemble with the rest of the drunkards in front of the stage situated in the middle of George for some live music. Oh yes, this street has its own stage.

For street events, check out St. John’s very own Mardi Gras, which takes place at the end of October (Newfoundlanders like to do things differently). The town shows up in a colourful array of Halloween costumes, and prizes are awarded for Best Dressed.

The real magic of George Street is that there is an endless supply of bars and pubs to be discovered. After living in this city for three years, spending nearly every weekend downtown, and actually walking through the street to get to work every day, I still find myself catching a glimpse of a bar I have never seen before in a hidden alleyway, or a club long since forgotten from my early college years.

I’m often puzzled as I walk into quiet, less crowded venues like The Well and Trinity Pub to realize that these pubs have a great deal of personality often overlooked for the popular, more crowded nightclubs.

Everyone in St. John’s has a love-hate relationship with George Street. They hate it because at some point they toppled down the concrete stairs and puked in some girl’s purse; they love it because the street provides an endless opportunity of hook-ups and short skirts.

So when you’re in the middle of the street on a warm summer’s evening, drinking legally in public with hundreds of people all enjoying live bands, an alcohol-infused tear of happiness will slide down your cheek and you will sip your cold beer and say, “Honey, I’m home.”

What NOT To Do in Newfoundland, Canada

May 2, 2022 Jacqueline Kehoe
✖
travelstoke
Download the mobile app
stoked by