A little-known Spanish matador is breaking with a sacred tradition, agreeing to advertise a soft drink that caters to the gay community while simultaneously slaying bulls. Tom Gates cries bullshit.

“Matador Joselito Ortega will be plugging a club-scene energy beverage called Gay Up and have those words embroidered into his cape in large, red cursive letters.” (AP) 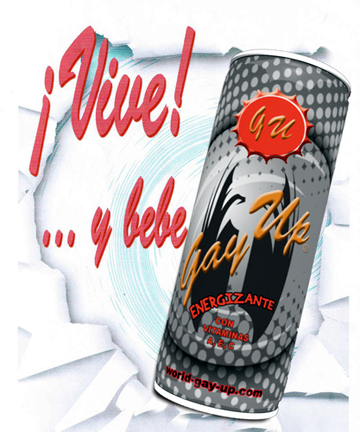 Photo courtesy of Gay Up

Look, I’ll leave the whining about product placement to That Guy. He can bemoan the state of the advertising world, about how every square inch of God’s Green Earth is for sale and how great the old days were, when advertising was just subliminally evil.

I guess if anyone should be pissed then it should be the bull, which should at least be able to make a equal buck displaying its own cheeseburger ad before being slayed or slewn or whatever the hell the past participle of ‘slay’ is.

What yanks my crank is that Ortega – who is, by the way, straight – is playing the Gay Card because his career is in the crapper. According to most reports, Ol’ Joselito is not exactly The Bullfighter Of The Year. He’s been gored many times since his tights-wearing career began in 2006, which is hardly a solid start for a newbie Matador. That’s like a school bus driver killing a few hundred kids before he gets the hang of a big steering wheel.

To be surprised that a pink cape and a gay ad would spark his career is unfathomable, yet Ortega seems to stand by his story that he’s simply trying to break down barriers for both the gay and capitalist communities. He told CNN, “I’m glad to be the first person (in bullfighting) whom the gay community will take as an icon.” Girlfriend thinks he’s Madonna and he’s really just Brooke Hogan.

Says Ortega, “I am a bullfighter. That is not going to change. I am going to go out into the ring as I have done until now, to risk my life, and the seven goring wounds on my body prove that.”

As if there wasn’t enough reason to root for the bull already.