TURKU WAS FINLAND’S former capital until famine, poverty, and three massive fires destroyed the city. The government packed it all up and moved to Helsinki. “They took everything, even the door knobs!” our tour guide explained.

But while some might say Turku harbors a bit of jealousy against the shiny new capital, Turkulainens are truly proud of their history. Our guide bitterly highlighted Turku’s former glory days through the relics that were left behind: the Turku Cathedral, Turku Castle, and restaurant boats bobbing along the Aura River. But I wanted to step into 21st-century Turku. Sure, history has its place, but Turku felt stuck in the 1700s.

Thanks to an extended lunch break, I managed to stave off the impending boredom by consulting my trusty illustrated pub map. Puutorin Vessa (Toilet Bar) and Panimoravintola Koulu (Old School Bar) caught my eye in particular, as they’re re-purposed from the former buildings that their names imply. I set my course, picked my drink of choice—a vodka tonic made with Finnish Koskenkorva—and started to see if drinking could warm me up to Turku. 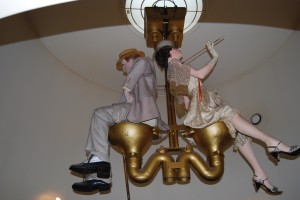 The ceiling the Toilet Bar.

Out of Turku’s 120 pubs, the Puutorin Vessa is probably the best known. A former public restroom near the bus station, it was converted into a bar by two popular local DJ’s. I entered anticipating the odor of urine, but instead I was greeted by glorious alcohol. The bar is whimsically decorated with commodes, figurines using toilets, and bed pans lining the windows.

The space is small and circular, so striking up a conversation felt natural. The beer selection was large and many came from breweries in the nearby south. Turns out that Finnish breweries specialize in making dark and light lagers and stouts. I was tempted to try the juniper beer, but I couldn’t risk the consequences of mixing beer and vodka.

A five-minute walk from the Puutorin Vessa is the Panimoravintola Koulu: the Old School Bar. This is a large brewery restaurant with its own beer garden, a spacious courtyard, and a very small golf course in the rear.

Small historical details pepper the bar, like a small rowing scull hanging from the ceiling. The hallway to the bar is a maze of chalkboards and wooden tables and chairs, and patrons use the school desks as their tables for the night. These desks were very similar to ones I had in primary school, doubling as book storage under the lids. 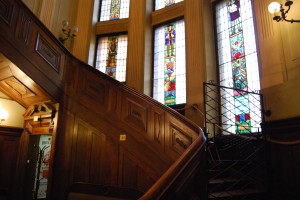 The foyer of the Old Bank bar.

Dubbed the “hippest after-work destination in Turku,” the Old Bank Bar’s granite exterior stands out from the other buildings on the block. The interior suggests this was no ordinary bank. The bar is opulently decorated with stained glass windows, pillars, and a large bronze clock encased in heavy wood. Former vaults that held valuables have been converted into private rooms for patrons, loaded with tableside kegs to create an escape for a quiet chat over cocktails.

There is a list of 200 beers, the largest in Turku, and 20 of them are on tap. At the front of the bar are some faded velvet green sofas that felt like an old college dorm’s. I settled into one and savored my last drink. We had thirty minutes left to make it back to dinner, and after three very strong vodka tonics, I wasn’t sure if I remembered the way.