There wasn’t much hope for a salvageable St. Patty’s Day when I walked out of my hotel in Dublin in the middle of a snowstorm. “First time it’s snowed on St. Patty’s Day in 16 years,” I overheard a police officer say as I squeezed by in my green and orange wig. Nevertheless, the sidewalks were a teeming sea of green as hordes of people clung to light poles, statues, and whatever else they could to find the perfect view as their green glasses, boas, and leprechaun hats dangled from their heads.

I soon found myself on the International Media bus, which led the parade through the middle of Dublin following none other than Saint Patrick himself, who greeted nearly every person who came out that day. Occasionally, the bus would come to a stop and someone in the cheering audience would exploit a lull to shout out, “Who are you?”…and I would simply smile back and wave, because I didn’t have the heart to respond,”I’m nobody!”

[Editor’s note: Scott’s trip to Dublin was sponsored by Tourism Ireland. Find them on Facebook.] This article was originally published on March 28, 2013. 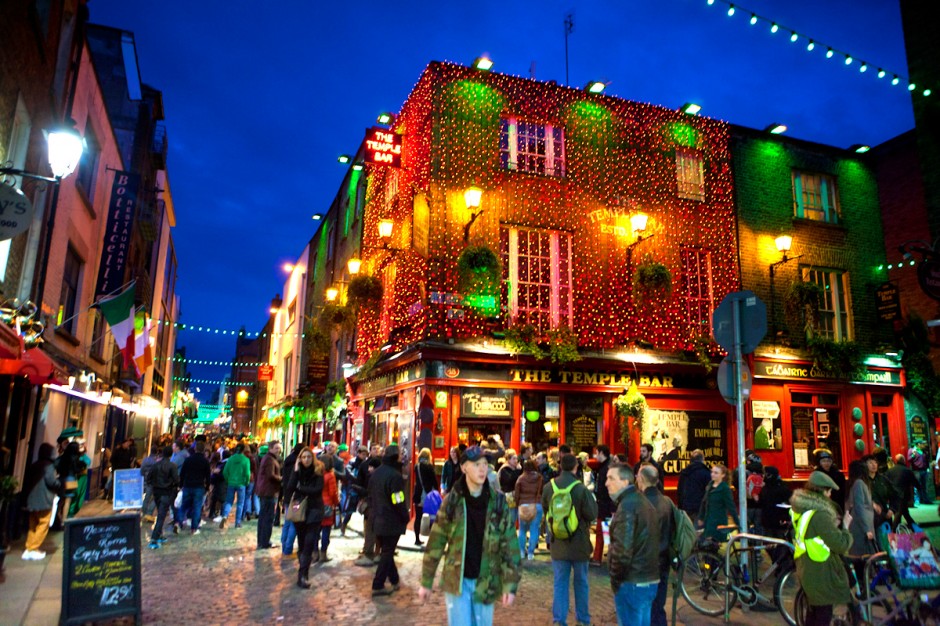 ...of Dublin was crawling with green Irish pride all weekend, from Friday until the wee hours of Monday morning.

We were introduced to Riverdance

...during a session on Friday night at The Church, followed by an Irish dance lesson. Michael Flatley was there to tell us about the origins of Riverdance and its current place in the world. The Guinness aided the fancy footwork (or at least we thought so). 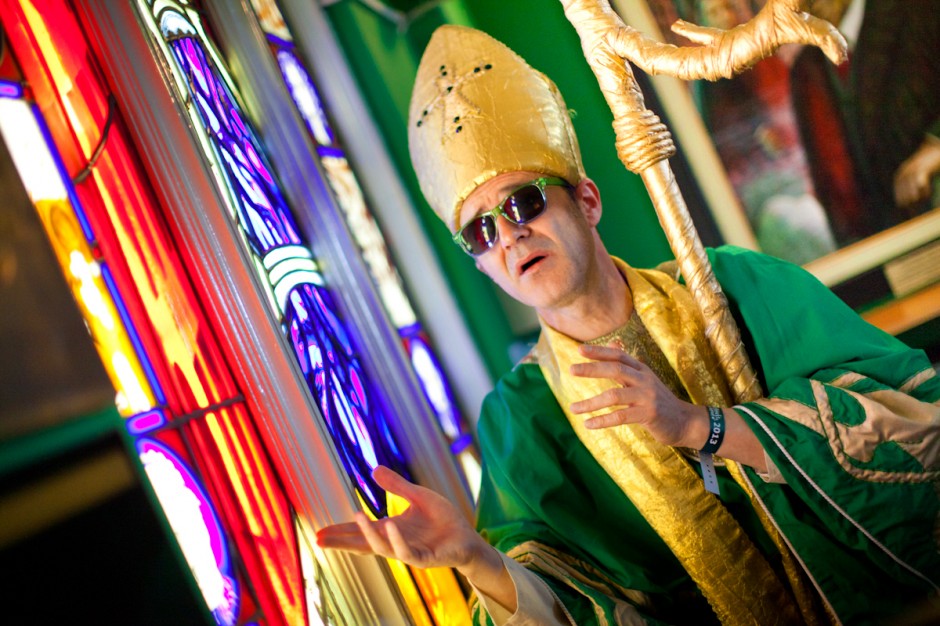 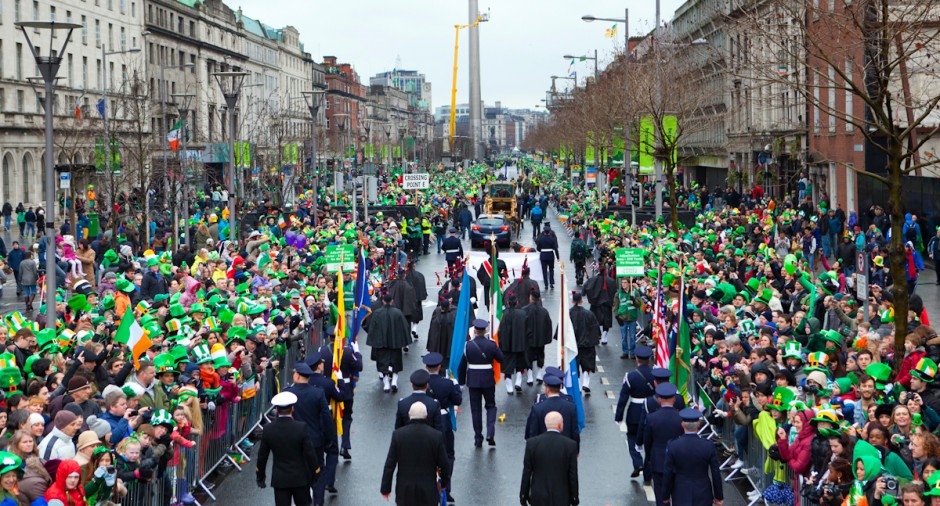 Being a part of the festivities

...meant a lot of chaos. Our crew blew kisses and waves and incited responses from the folks observing from below, even if they didn’t exactly know who we were. They probably all went home later and Googled us to see if we were famous. 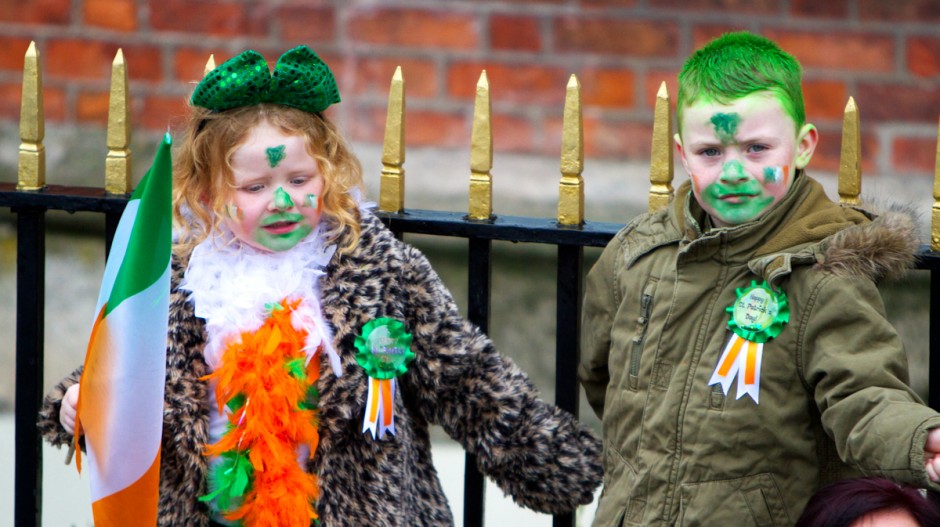 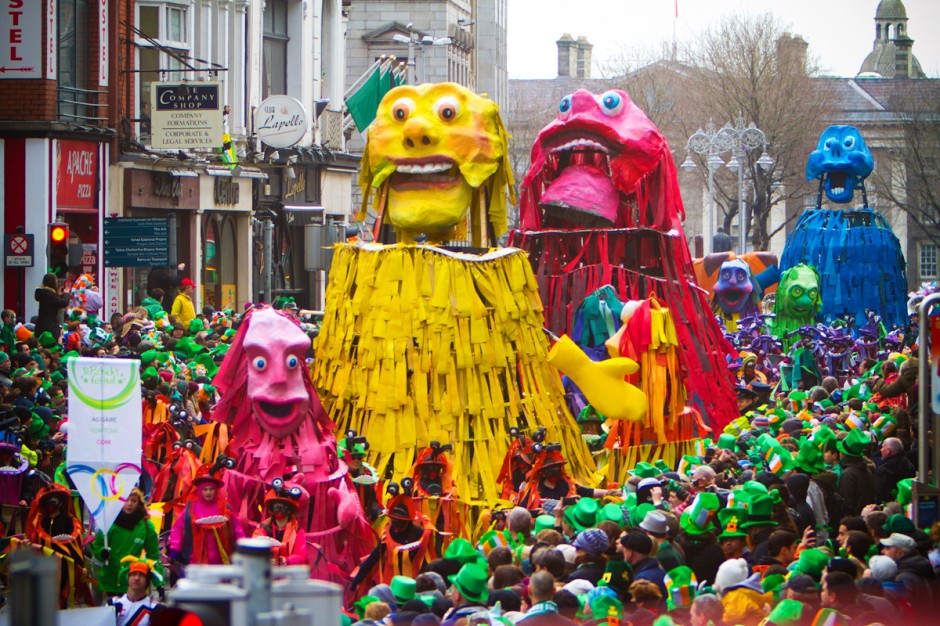 ...having a broken jaw just completes the scene. The whole thing had a sort of Mardi Gras vibe to it. Eclectic to say the least. 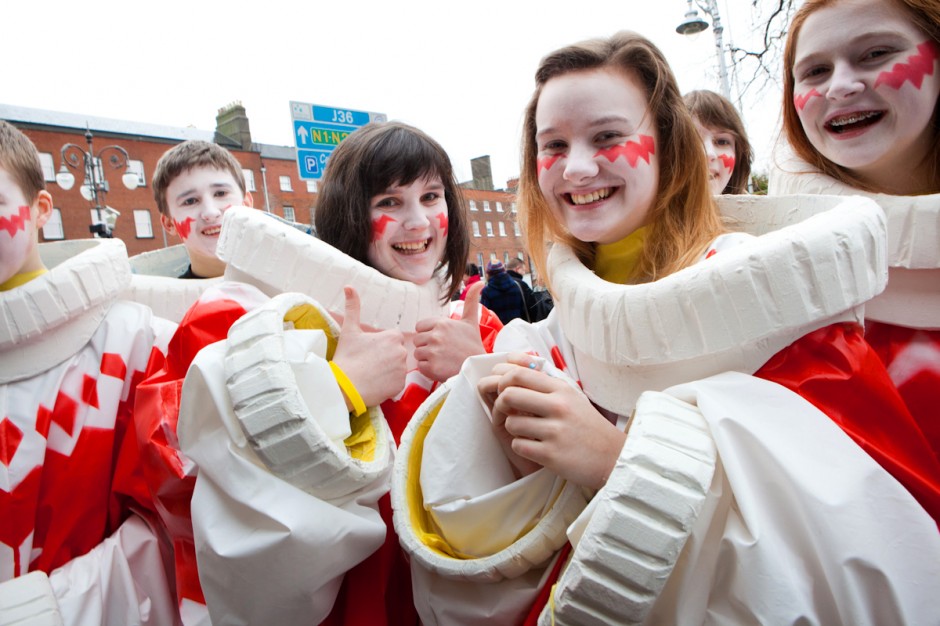 ...whatever they wanted to rock -- the way it is on St. Patty's Day in Ireland. 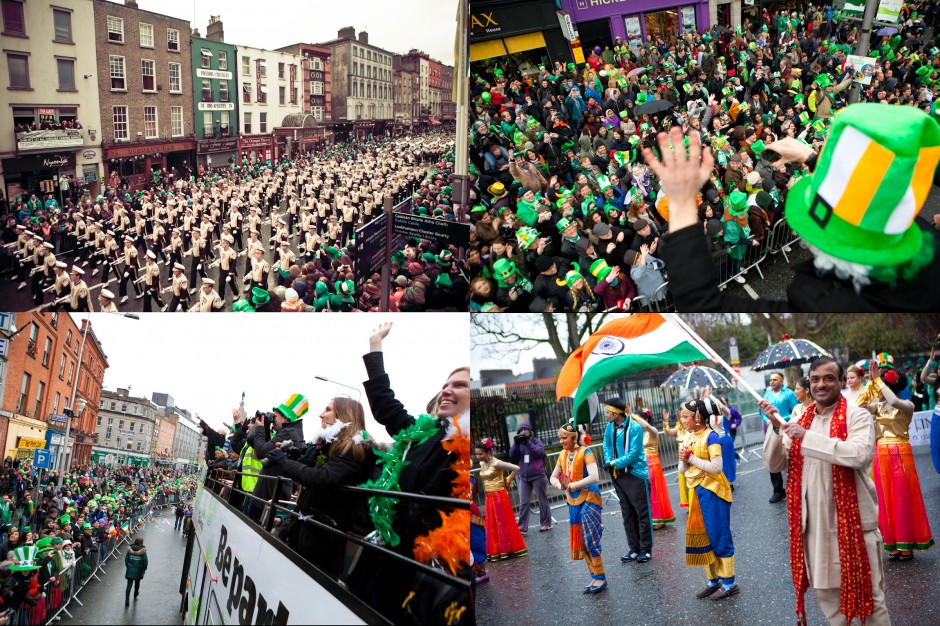 Riding an open-top bus in the St. Patrick’s Day parade. It’s about as big of a shitshow as you’d expect. 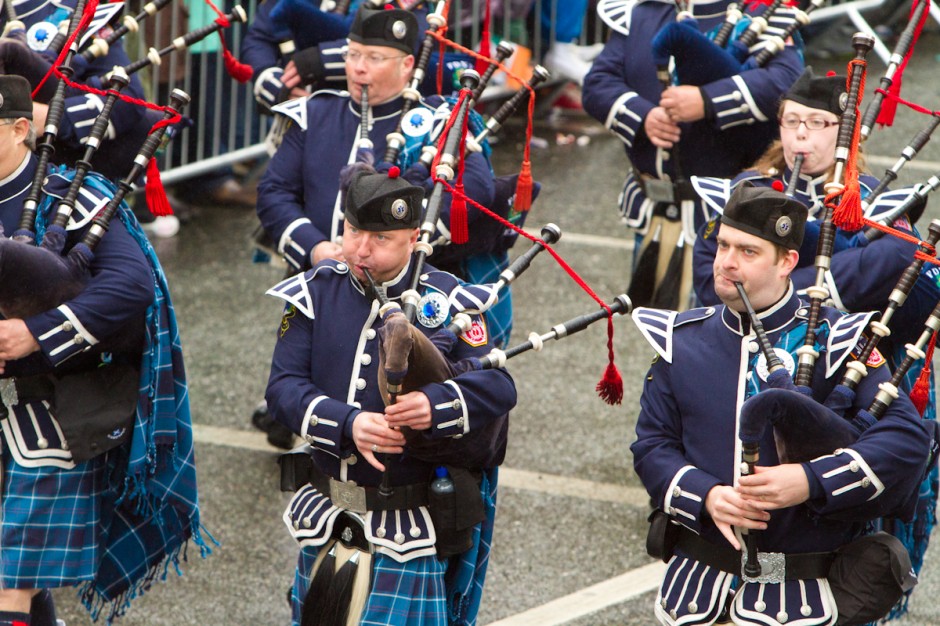 ...and musical groups from around the world took to the streets as well. There was talent featured from the US, Canada, Germany, France, and elsewhere. 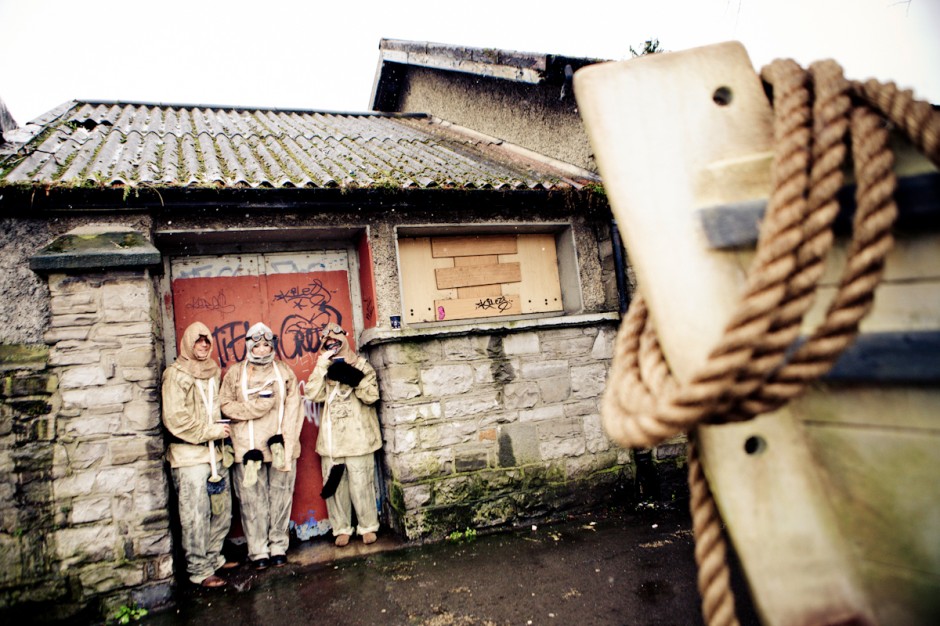 ...the parade has an eclectic vibe to it, I really mean it. This pre-staging scene looked like something out of a James Bond movie. 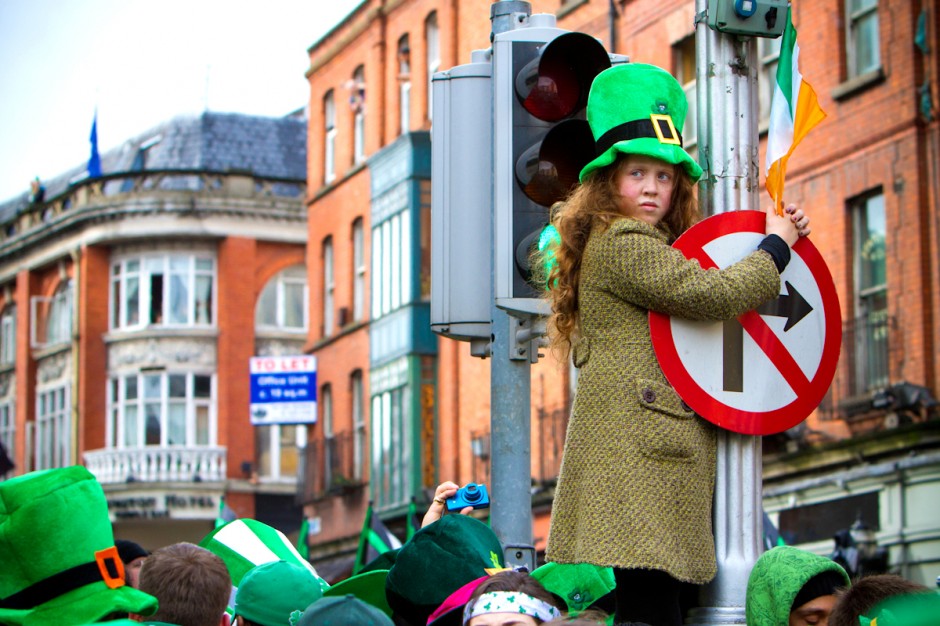 ...clings to a light post, hoping for the best views of the parade.

...were lucky enough to watch the festivities from their windows high above ground; other parade-goers were literally behind bars. 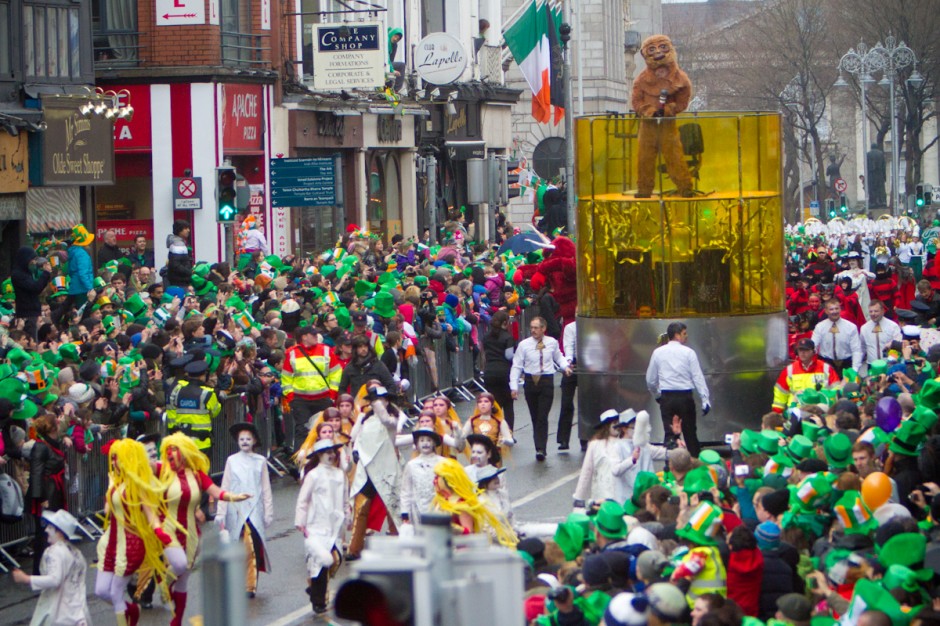 Not really sure what the hell was going on at this point. 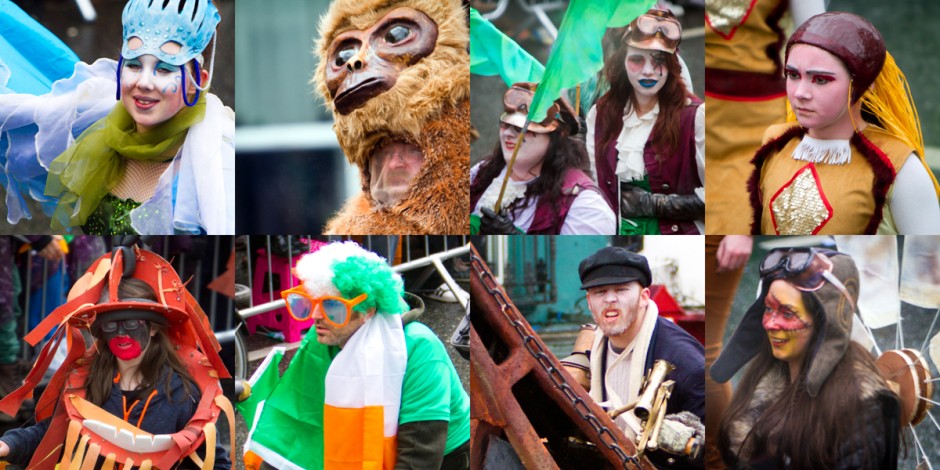 Myself and the other media folk

...weren’t really sure if we were completely misinformed about Irish pop culture, or if the parade goers were just entirely random characters trying to outdo each other in the “absurd” department. My favorite was the mustached older man dressed in a giant monkey costume gyrating his hips to dance music. 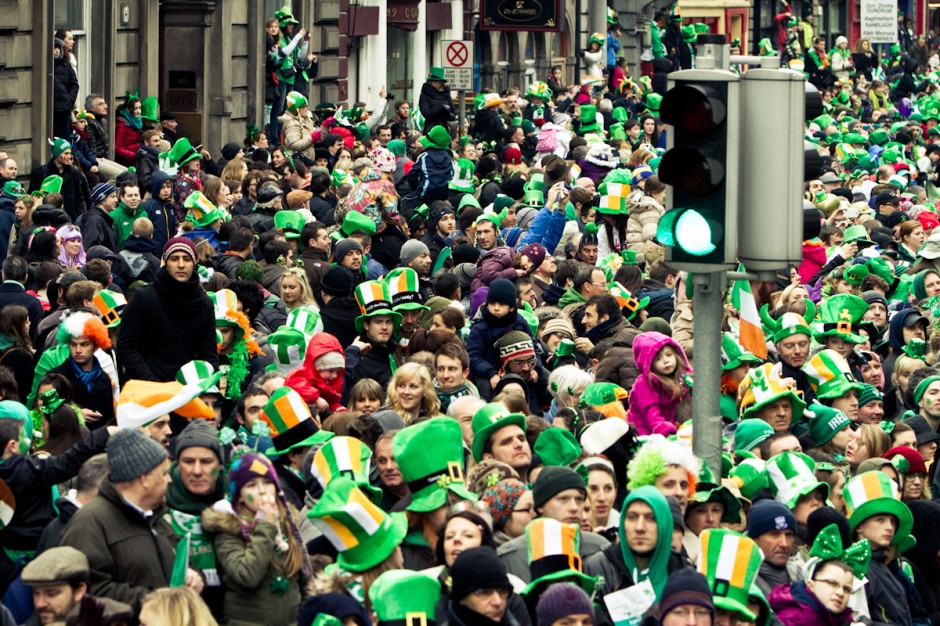 We were feeling pretty fortunate

...to be on an open-top bus rather than battling our way through those crowds, but nobody on the ground seemed to mind at all.

...who led the parade through the streets. “I have Obsessive Compulsive Blessing Disorder,” he said.

...took to the streets of Temple Bar early on Sunday afternoon. The snow didn’t seem to affect them in the slightest. 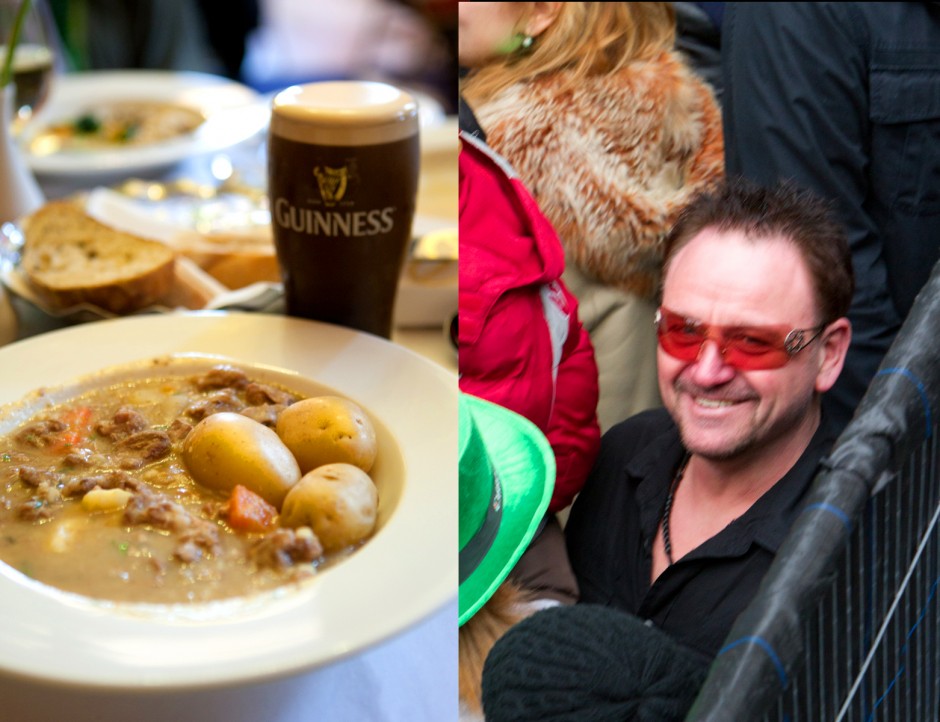 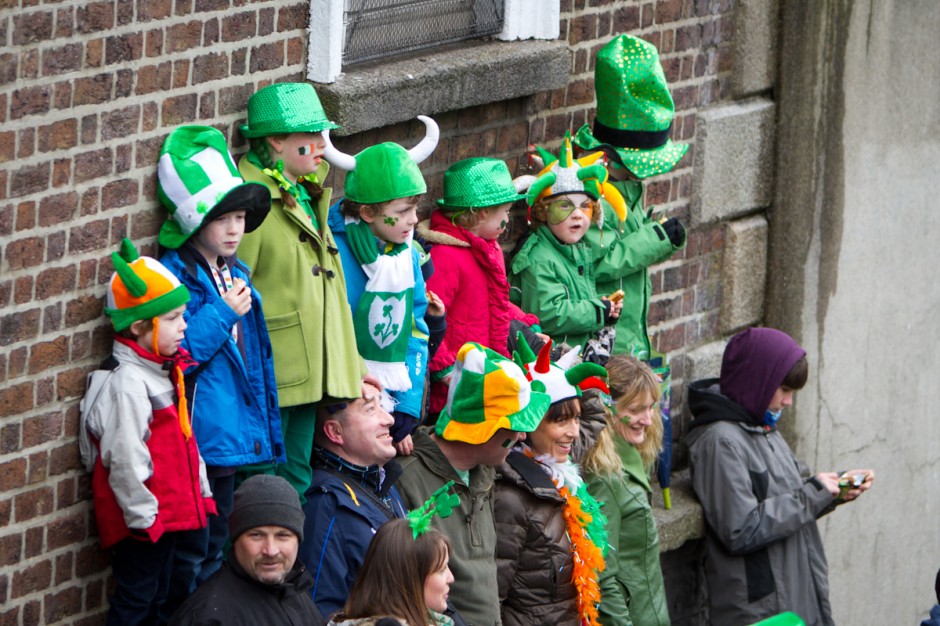 Even the children were out enjoying good Irish craic 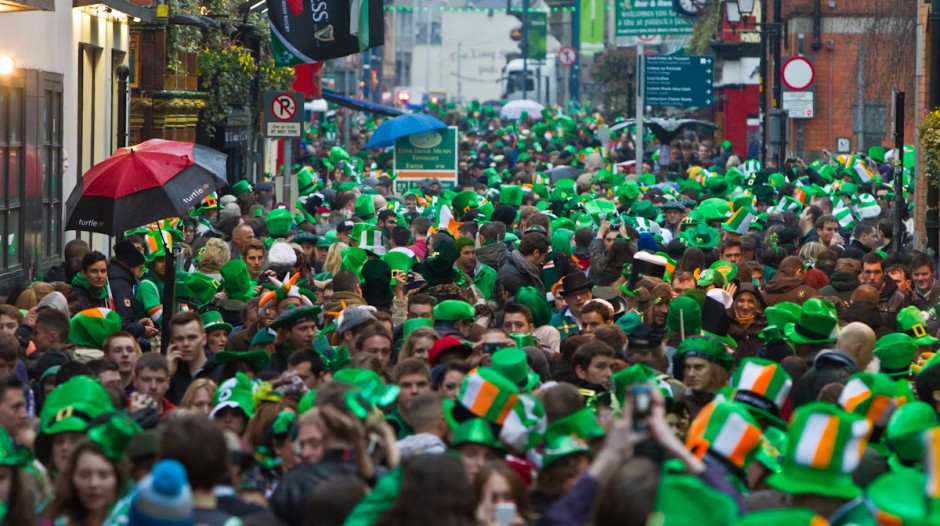 The sea of green

...was so dense around the Temple Bar area at 3pm that it was impossible to walk. People were generally good-natured, though, and willing to pose for the camera. 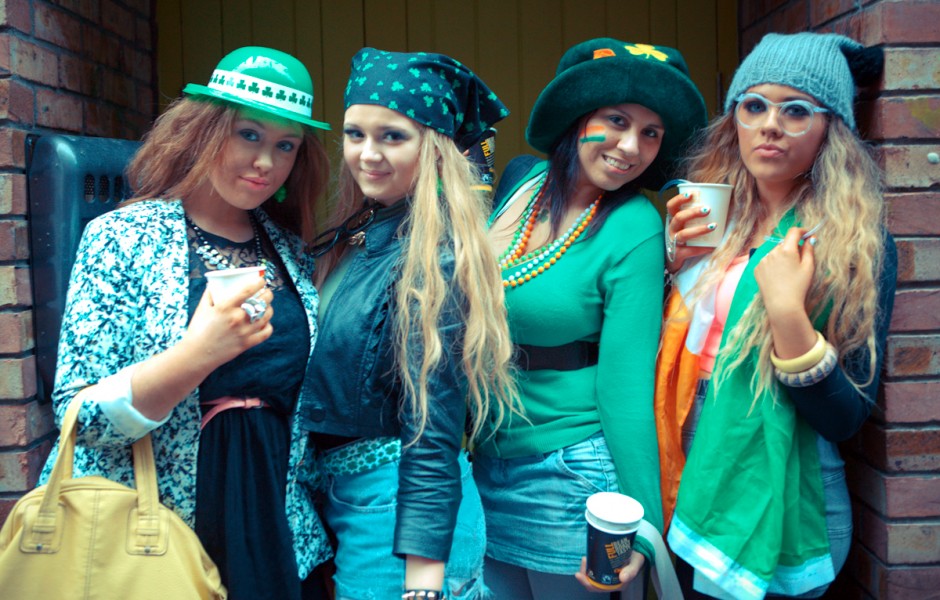 ...sporting full Irish regalia; some other tourists sporting...we’re not exactly sure.

Tip: If you want to escape

...the madness of Temple Bar while still enjoying full-on debauchery, go to the Guinness Storehouse. There was live music and a silent disco on one floor, but you can’t beat a pint in the Gravity Bar overlooking the city. 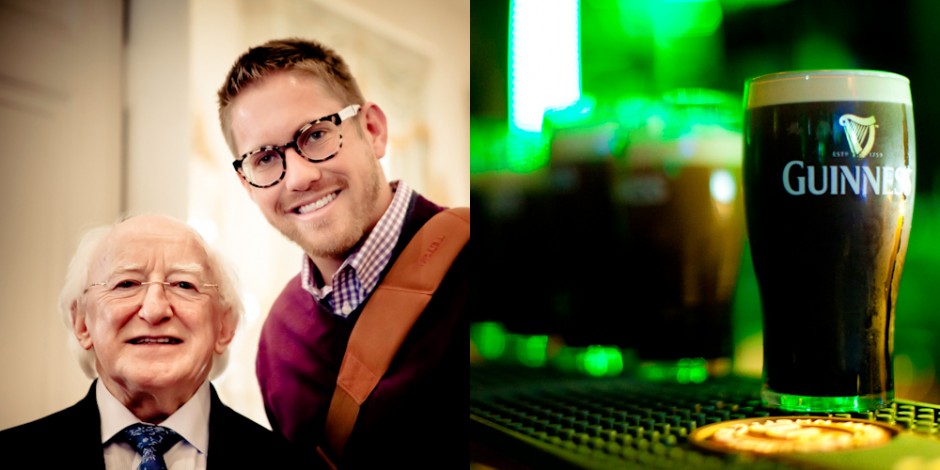 ...kicked off with the honor of shaking hands with Michael Higgins, the President of Ireland. Naturally, this was immediately followed by a pint of Guinness. 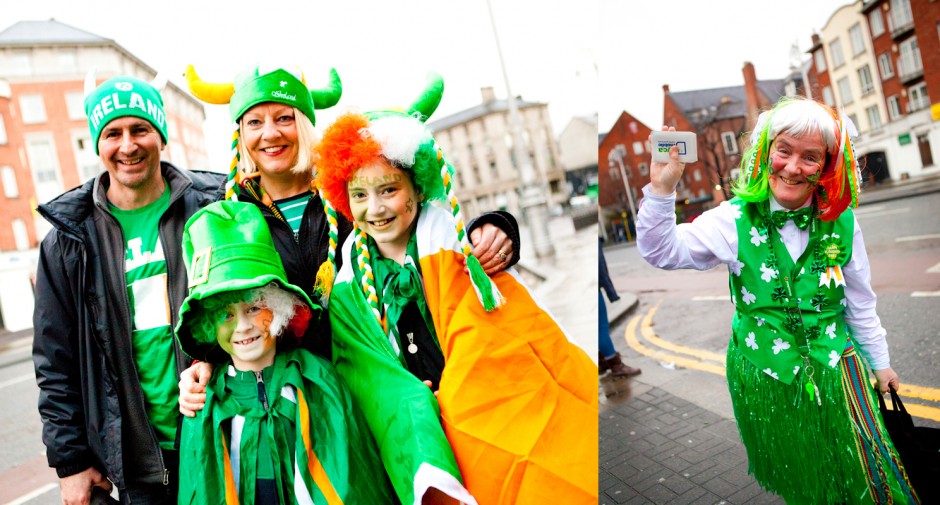 Believe it or not

...St. Patrick’s Day in Dublin is a family affair. People of all ages come out to participate, and the amount of work they put into their costumes is impressive.

A girl wears a shamrock mask

...and German firemen stack their hats in the Guinness Storehouse. 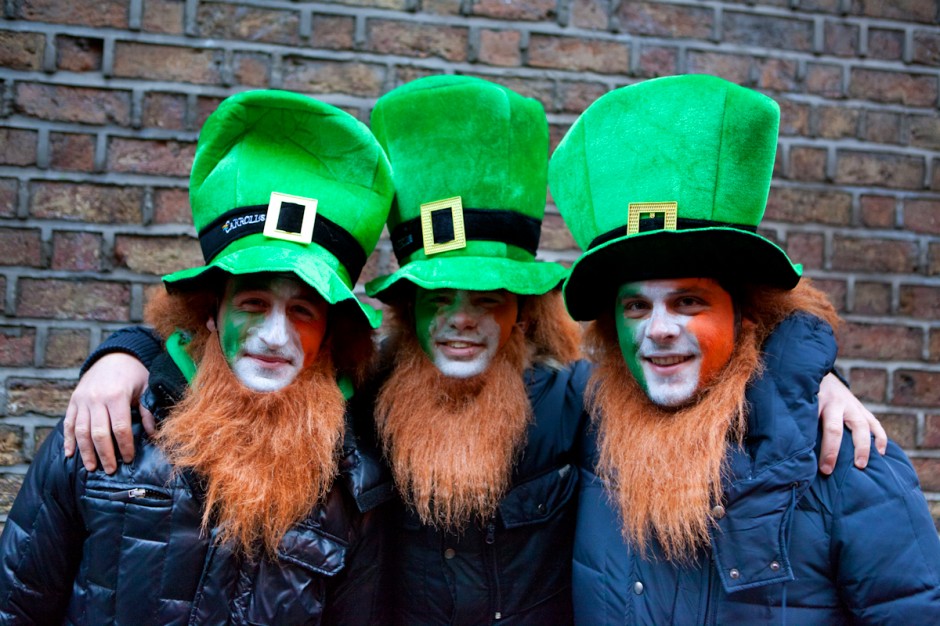 Everyone wants to be a ginger on St. Patty’s Day! 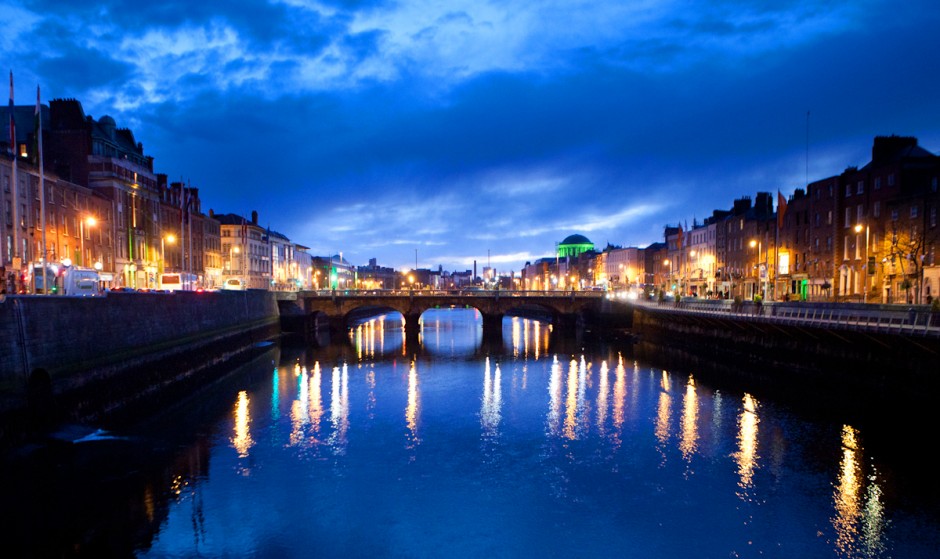 Even the city’s buildings

get dressed up in green for the occasion. All along the River Liffey, shamrock-green lights brighten the sky.

Tagged
Festivals Galleries Holidays
What did you think of this story?
Meh
Good
Awesome
Sponsored

10 Awesome Experiences in and Around Dublin

the Power of Women Is Heard and Seen Around the World

It's Not Summer in Dublin if These 30 Things Don't Happen

8 Signs It's Time To Get the Hell Out of Dublin