I stole this story idea from my friend, Adam. He’s okay with it.

I sat at his kitchen table in Montreal, lamenting the fact I didn’t have a great story idea to wrap up my time at Osheaga, Canada’s answer to Lollapalooza / Coachella. “Well,” he said. “Think about everything else you’ve done this past week. Montreal’s a pretty sweet spot for a mega festival.”

Truth. I’ve spent a huge amount of time travelling Canada over the past year, and I can’t imagine this festival happening in any other city. Other festivals on the roster here include the world’s largest jazz festival (Montreal Jazz Fest), winter’s Igloofest, the Montreal World Film Festival, and the Just For Laughs comedy festival. Why is Montreal such a damn good festival town?

Got about 100,000 youngsters flocking to your city for three days of musical chaos? Oh, let’s just stick them on some islands.

Parc Jean-Drapeau consists of two islands: Île Notre-Dame, and Ile Ste-Hélène, where Osheaga is hosted. To get there, you have to be shuttled underneath the Saint Lawrence River via the Metro’s Yellow Line, from Berri-UQAM. This means you’re far enough away to not disturb the less rowdy Montrealers busy doing their work thing, but you’re still within easy access to the downtown core.

This is also the site of Piknic Electronik, an event featuring electronica and techno, held every summer’s Sunday in the park. Guests bring their own wine and picnic spreads, pay a $15 cover charge, and then spend the afternoon dancing like wild animals around the DJs. It’s an odd sensation to do so in broad daylight.

Osheaga had some major talent coming through this year, including Macklemore, Kendrick Lamar, Frank Turner, the Lumineers, and Mumford & Sons. I was worried I wouldn’t get to see everyone I wanted to see, but I think this might have been the first festival I’ve ever attended where performers played exactly when they were supposed to. Every time.

The huge headliners took to the main stages side-by-side: Scène de la Rivière, and Scène de la Montagne. As soon as one artist finished performing, the next artist jumped onto the adjoining stage. The one downside of this is that I got severely lost in the crush as Imagine Dragons finished up on one stage and I made my way to see Macklemore at the other. We’ll ignore the dude who whipped out his wiener and peed all over the ground, causing bit of a splash in such tight quarters.

But then away from the highest density of people were the other stages: Scène Piknic Electronik, Scène Verte, and Scène des Arbres. Most of the alternative folks played here, as well as the DJs. I was stoked to see one of my favourite musicians, Frank Turner, at Scène des Arbres where people weren’t so squished together. I was close enough to see his beard in all its glory.

Food and drinks were expensive ($6.25 for a can of beer), but they were plentiful. Behind the main stage is an area devoted to food trucks, and when you are in Montreal you EAT. Not just poutine, either. But that’s a start.

Finally: I consulted my Osheaga iPhone app religiously for band updates and scheduling notifications. When I noticed Macklemore had been rescheduled, I tweeted at Osheaga because I hate talking to most people face-to-face, and received a response immediately. Prompt and efficient. 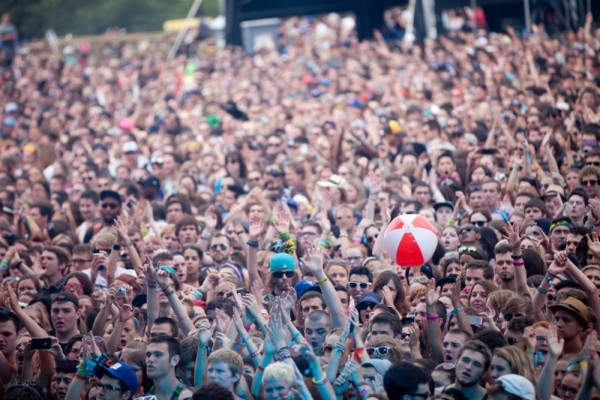 There’s always something going on in Montreal.

My trip to Osheaga coincided with a million other events, including the Montreal International Fireworks Competition. I only know this because I nearly fell out of bed one evening when a round of fireworks erupted like gunshots just outside my window. Other events included Divers/Cité (a LGBT-and-friends event, with a massive dance party at the manmade Clock Tower beach), and Festival Mode & Design (50+ street fashion shows).

I urge you to get out and experience the city when you’re in town for Osheaga. Despite basically living at Parc Jean-Drapeau for three days, I still made time to eat, drink, and be merry. Highlights include the best wood-fired margherita pizza I’ve ever had at Bevo Bar + Pizzeria, the thick brownie I ate at Olive & Gourmando, and catching my hair on fire thanks to a candle at La Champagnerie. There was also the weird sweaty dance party at Royal Phoenix Bar, followed by rooftop skinny-dipping with a whole lot of gay men (at least they told me they were gay).

Whatever happens politically in Quebec, I still feel Montreal is the most liberal city in the country. While living there last summer, I knew I’d fallen hard in love the night I watched a trio of elderly men cycle past me in the Old Port, their bikes blaring trance music and their bodies lit up with flashing lights. Another night, my roommates and I snuck onto the roof of our building and had a barbecue picnic with boxed wine on the tables of an old, abandoned bar overlooking Saint-Laurent. You can literally be whoever you want to be, and do whatever you want, and Montrealers will barely bat an eyelash.

You can do the same at Osheaga. I was on a solo mission at the festival, and I’ll tell you, there’s nothing glamorous about sitting alone in the VIP tent (despite the cheap beers). So I made friends with a guy named Larry, who introduced me to his buddies, and then we had a dream team. It’s the kind of judgment-free space that opens you up to those possibilities.

Like Matt Bonham said in his piece about musical festivals being the closest thing to utopia, reality is turned upside down. Frank Turner said the same thing while seducing the crowd with his hit song “Photosynthesis”: It’s a chance to escape our shitty lives, the mundane, the everyday.

I remember being amazed by how peaceful and good-natured a sea of 100,000 people was. Except for the dude who pissed all over the back of our legs. Goddamn that guy. 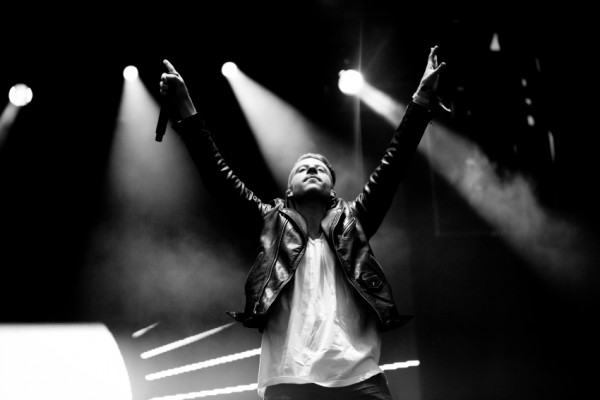 Candice’s trip to Osheaga was sponsored by Tourism Montreal.
Tagged
Travel Trip Planning Montreal, Canada
What did you think of this story?
Meh
Good
Awesome