1. There are a whopping 32 UNESCO World Heritage Sites in the country. 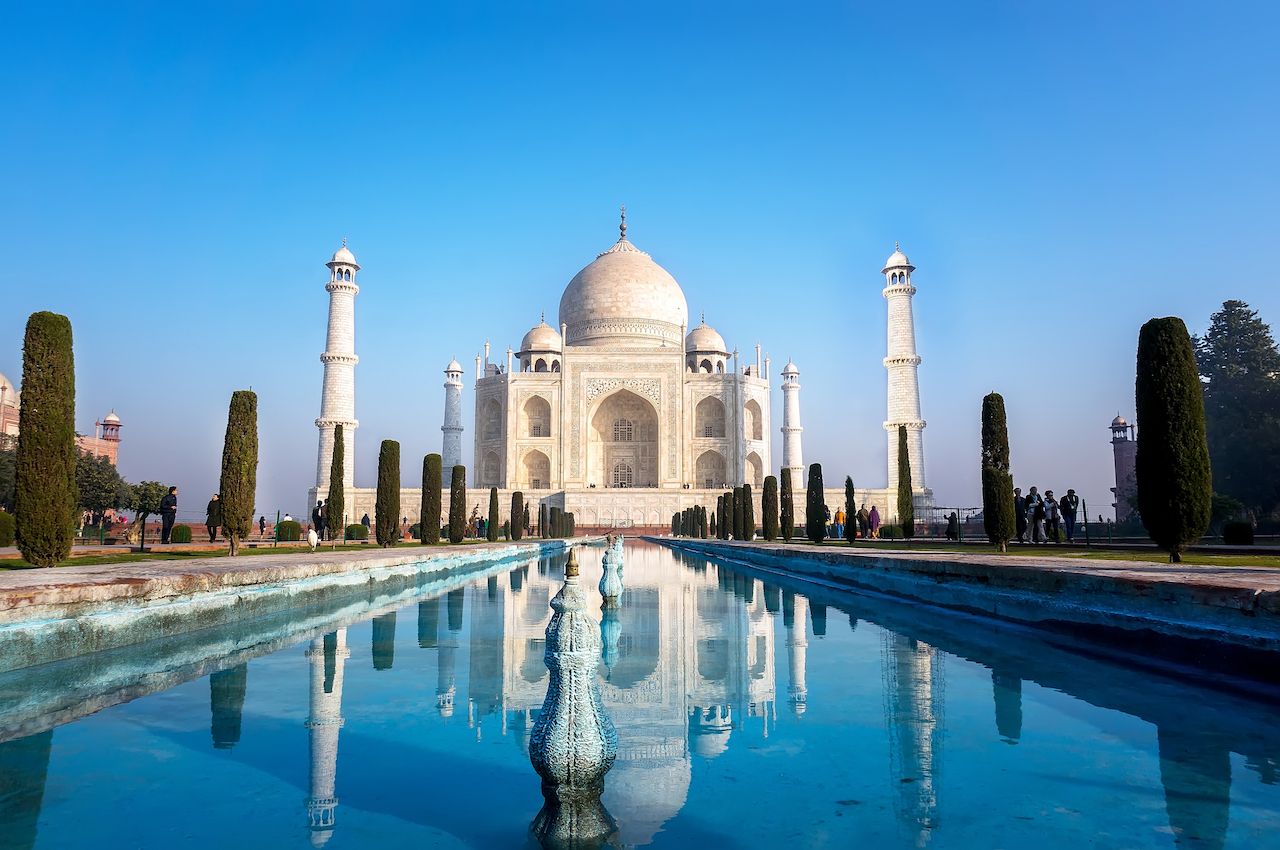 The Taj Mahal is one of the most famous places in the world, but India has 31 other UNESCO World Heritage Sites within its borders. The US, by comparison, has 23.

Testament to India’s diversity, these sites include hill forts in Rajasthan; mountain railways in Shimla, Darjeeling, and the Nilgiri Hills; the Western Ghats mountain range in the southwest of the country; the Ajanta and Ellora Caves in Maharashtra; the Sundarbans mangrove forest of Bengal; and many other national parks and wildlife reserves. And still, UNESCO sites only scratch the surface of India’s cultural, artistic, and natural wonders.

2. All the major world religions are represented in India.

Although around 80% of Indians are Hindus, the country is home to large, well-established communities of all the major world religions, as well as some smaller ones. Christian communities and churches are visible throughout Kerala and Goa, the latter housing the remains of Catholic Saint Francis Xavier at the Basilica of Bom Jesus. The long history of Judaism in India can be seen in the Jewtown area of Fort Kochi in Kerala. Parsi Fire Temples and Towers of Silence are spread throughout Mumbai.

Elegant Jain temples, with their marble statues, are common throughout Delhi, Rajasthan, and Gujarat. Important Buddhist pilgrimage sites are spread around Uttar Pradesh and Bihar, near where Siddhartha Gautama Buddha was born and lived. Sikhism began in the Punjab area of India (and present-day Pakistan), and Amritsar’s Golden Temple is one of the country’s most peaceful, beautiful, and spiritual sites.

The marble Baha’i House of Worship, or Lotus Temple, in Delhi, is one of the most visited buildings in the world. And although Muslims constitute just 14% of the population, mosques, mausoleums, shrines, and imambara are spread throughout the country. (In fact, India has the world’s second-largest Muslim population, after Indonesia.)

3. India has the largest population of vegetarians in the world.

Although not all Hindus are vegetarian, and not all Indians are Hindu, vegetarianism is an important part of traditional Hindu beliefs and practices. Between 20% and 40% of Indians are vegetarian, meaning vegetarian travelers are never far from delicious dal (lentil), sabzi (vegetable), or paneer (cheese)-based dishes. (Vegans will have more trouble, as dairy products are used in abundance.)

4. There are some weird and wonderful post offices here.

With the world’s largest postal system, India has post offices in some pretty unusual places. The town of Hikkim, in Himachal Pradesh, has the world’s highest post office (as well as the highest polling booth) at over 15,400 feet. Dal Lake in Kashmir has a floating post office, with an attached philatelic museum, built to resemble Srinagar’s famous houseboats. In the ‘70s, some Rajasthani towns were serviced by mobile camel post offices, with the mountainous Darjeeling area of West Bengal featuring mule post offices.

5. Varanasi is one of the oldest continually inhabited cities in the world. 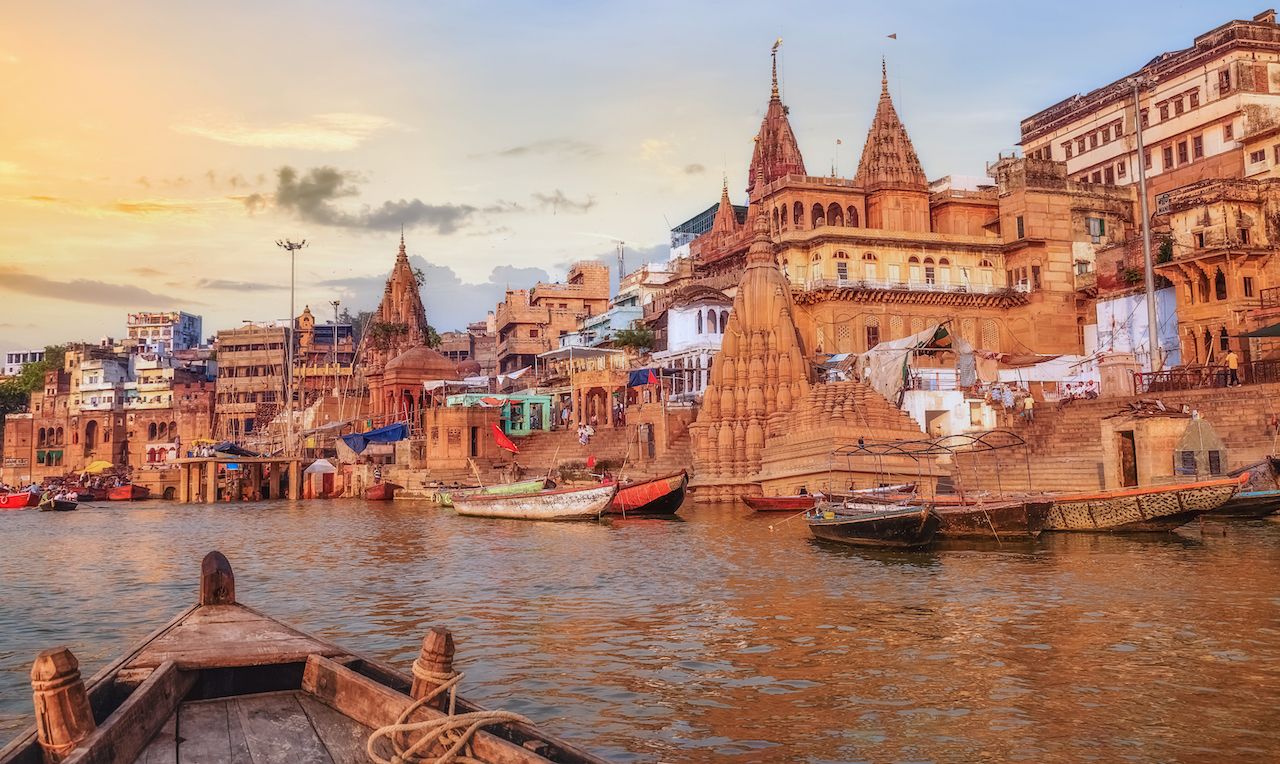 The holy city of Varanasi was first settled over 3,000 years ago and has been inhabited ever since. Hindus traditionally believe it’s even older, created by Lord Shiva over 5,000 years ago. Varanasi (also known as Benares) is situated at one of the holiest points of the River Ganga. Many Hindus aim to die here, because doing so is believed to free a person from the cycle of birth, death, and rebirth. Nowadays, a large modern city also spreads out from the riverbank.

6. India is the second largest English-speaking country in the world.

The number of English speakers in India is second only to that of the USA. English is one of the 22 official languages of India, and the joint official language (along with Hindi) of the Central Government. Only around 10% of Indians know English, and just a minority know it as a first language, but in a country with such a huge population, English-speaking travelers can count on being able to communicate almost everywhere they go.

7. India is so multilingual that nobody will mind your funny foreign accent. 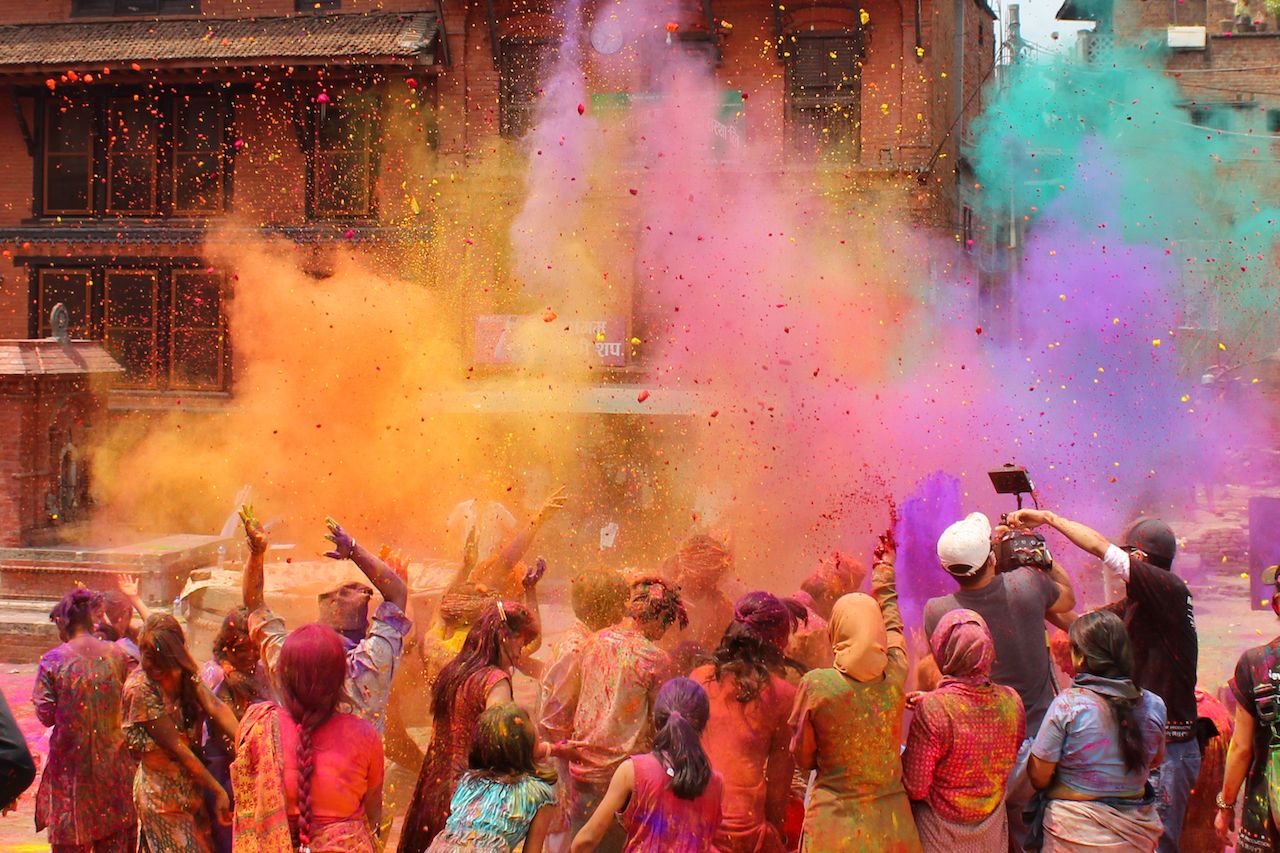 But just because you can get by in India using only English doesn’t mean you should. Indians are very encouraging of foreigners who attempt to speak their languages — whether Hindi, Bengali, Tamil, or any number of other local languages — and are thrilled when you try.

Indians are used to hearing a variety of accents and language capabilities, so no one will be perplexed if you don’t pronounce words perfectly or mix up your verb endings and postpositions. Chances are, the person you’re testing your faltering Hindi on speaks Bengali at home and English at work, and is used to bending their ear to the different sounds.

8. The Asiatic lion can only be found in western India.

Also known as the Persian lion, the Asiatic lion once lived across parts of the Middle East all the way to India. These days, it’s an endangered species and can only be found in Gujarat, primarily in the Gir Forest National Park and Wildlife Sanctuary. Numbers have been increasing over the last few years, and lions have even been known to prowl the beaches of Gujarat.

9. The northern state of Uttar Pradesh would be the world’s fifth most populous country.

Uttar Pradesh has a population of more than 200 million — that’s more people than in Japan, Mexico…even Russia. UP is home to the Taj Mahal and Varanasi, but it’s so large (at almost 94,000 square miles, it’s about the size of Michigan) and densely populated that so much more can be enjoyed here: There’s the old Mughal city of Fatehpur Sikri, wildlife sanctuaries, the imambara complexes of Lucknow, the Buddhist sites at Sarnath…

The Kumbh Mela is a Hindu pilgrimage that keeps getting bigger. It’s held every three years and rotates between Allahabad, Haridwar, Nashik, and Ujjain, but the Allahabad Kumbh Melas — held every 12 years — are the largest and holiest. For the last Kumbh Mela, in Allahabad in 2013, an estimated 100 million bathed in the confluence of the Ganga and Yamuna Rivers over the course of 55 days.

11. The country has long been a center of fashion. 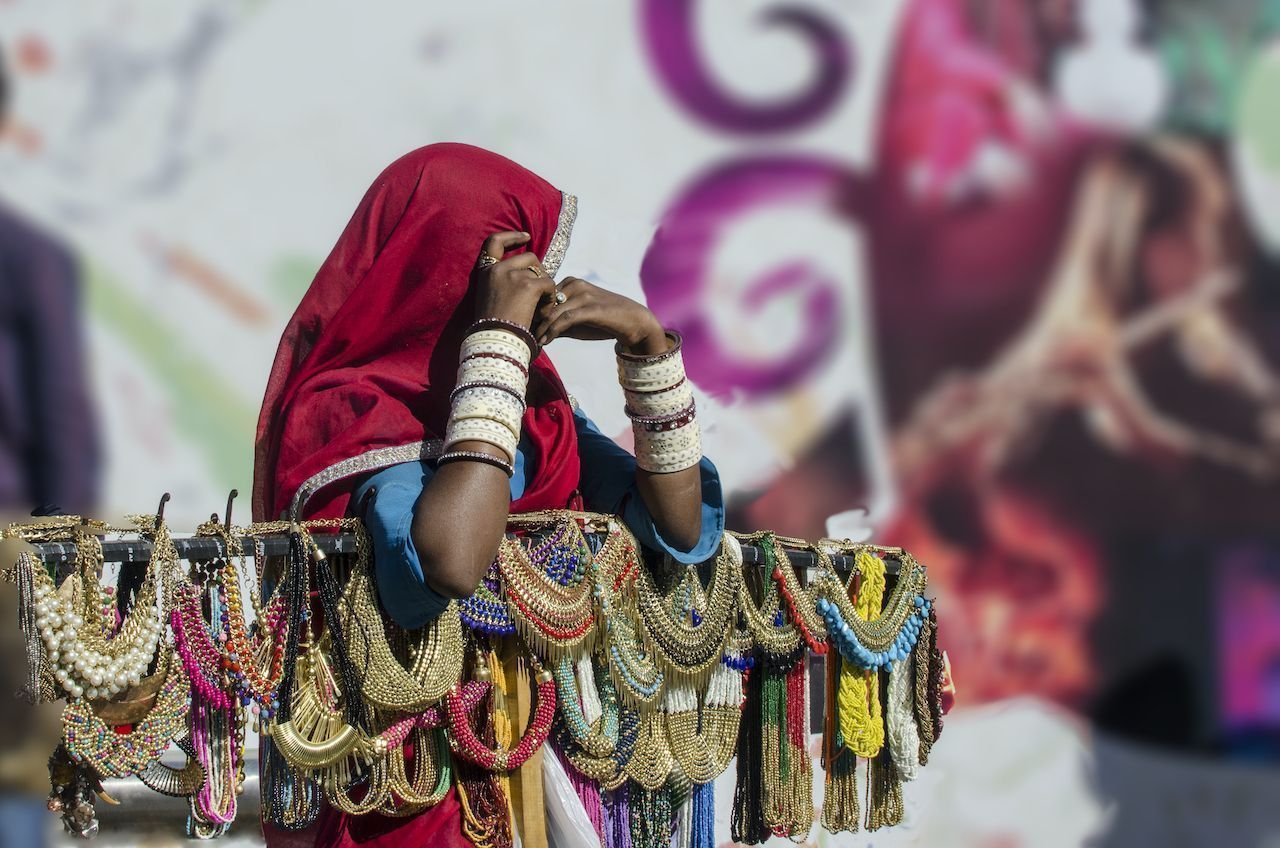 Since ancient times, Indian textiles were traded all around the world, and the country has long been known as a producer of the finest cotton and silk. One of the effects of British colonialism in the 19th and 20th centuries was the impoverishment of Indian textile manufacturers, as Britain deliberately destroyed the industry in order to dominate the global textile market themselves.

Nowadays, the Indian fashion industry is booming once again, with fashion weeks being held in Delhi, Mumbai, and Bangalore, and a design aesthetic that combines traditional items and fabrics with more modern features. Many traditional techniques have been preserved — such as handloom weaving and block-printing — and are available all over India and the world.

12. There are elaborately carved step wells all over the desert — and they’re really cool.

In the dry climates of northern and western India, water isn’t always readily available — sometimes it’s necessary to dig deep underground to get it. Many step wells in Delhi, Rajasthan, and Gujarat are as elaborately carved and decorated as any temple or mosque. Zig-zag steps lead down to the water, with tunnels and balconies appearing on various levels.

Step wells were meeting places, especially for women, for many centuries, and the oldest date back to around 500 CE. While most are now abandoned and some have fallen into disrepair, many — such as Adalaj Vav outside Ahmedabad, or Chand Baori outside Jaipur — are well-kept and incredible to look at.

13. Meghalaya is the wettest inhabited place on Earth.

Although the arid deserts of Rajasthan in the west are more famous, the northeastern state of Meghalaya is the wettest inhabited place in the world. Mawsynram, a village in the Khasi Hills, receives an average annual rainfall of 467 inches. Just 10 miles away, the village of Cherrapunji comes in second.

14. Speaking of Meghalaya, the traditional bridges in this state are made entirely out of living trees.

The incredible bridges in this hilly region have been made for more than 500 years by training roots and vines to grow across canyons and streams. They can take several years to create, but when they’re finished they’re much more durable than wooden bridges, which would quickly rot in Meghalaya’s incredibly wet climate.

15. Padmanabhaswamy Temple is the richest in the world. 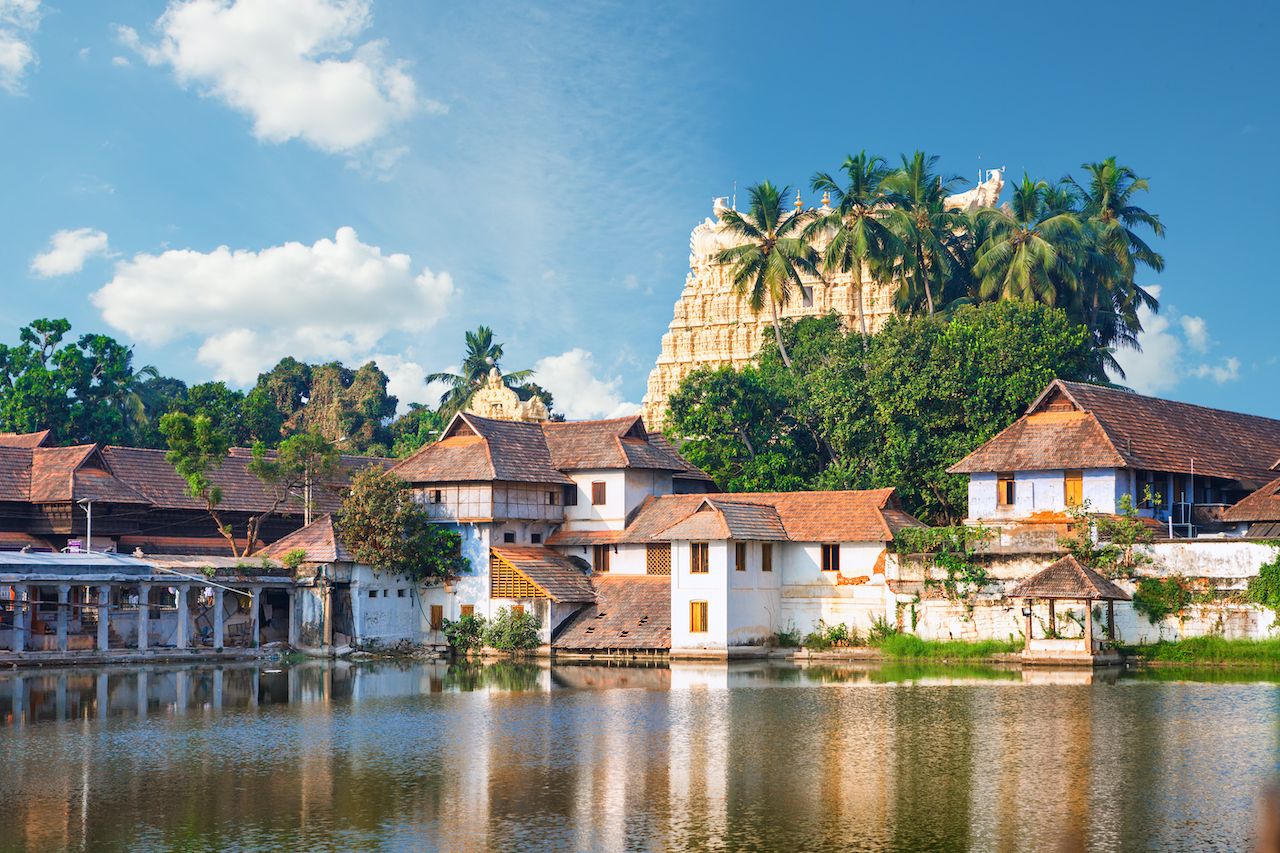 Padmanabhaswamy Temple, in Kerala’s capital city, Thiruvananthapuram, is not only the richest Hindu temple in the world, it’s also believed to be the richest place of worship ever to have existed. In 2011, the temple’s vaults were opened for the first time in over 130 years, and hundreds of millions of dollars’ worth of gold, silver, and precious stones were found inside.

Only Hindus are allowed to enter the 16th-century temple, as is the case with Hindu temples throughout Kerala, but non-Hindus can check out the view from the walkway leading up to Padmanabhaswamy, and can visit the adjacent Kuthiramalika Palace that belongs to the Travancore royal family.

16. India has the largest sundial in the world.

And they just do astronomy better. Forget little telescopes. The 18th-century Jantar Mantar complexes in Jaipur and Delhi take astronomy to a whole new level, and were once used to prepare astronomical tables and predict the movements of the sun, moon, and planets with the naked eye.

Jaipur’s Jantar Mantar is the largest, with 19 architectural astronomical instruments, including the world’s largest sundial. Delhi’s Jantar Mantar is smaller but less crowded, and you can even climb to the top of some of the structures.

17. There are more than 140 types of traditional Indian dessert.

Every region of India has its own specialty of sweet, spiced dessert: petha, a boiled pumpkin dessert from Agra; daulat ki chaat made from the foam of churned milk and only available in Delhi in the winter; rosogollas, Bengali milk-based balls soaked in syrup; gajar ki halwa, made from shredded carrots and popular in the north; kheer rice pudding; pistachio or saffron-flavoured kulfi, India’s answer to gelato; laddus, made from chickpea flour, and a common offering left for Hindu gods; jalebis, deep-fried dough squiggles soaked in syrup…

Indian desserts are often very sweet, rich with ghee, and heavily flavoured with cardamom, cinnamon, cloves, saffron, coconut, rosewater and/or nuts. And unlike many sweets originating from Western countries, it’s possible to see the whole foods from which Indian sweets are made. And that makes them healthy, right?

Located in the winding back streets of Old Delhi, you know when you’re getting close to the Khari Baoli by the intensifying smell of spices and the overflowing sacks wheeled past on cycle and bullock-pulled carts. The market is at least four centuries old and sells wholesale dried fruit, nuts, and ingredients needed for sweets, as well as spices.

It’s a place that commands the attention of all your senses — a lot like India itself.

This post is proudly produced in partnership with Incredible India.

This post is proudly produced in partnership with Incredible India
Tagged
Trip Planning India
What did you think of this story?
Meh
Good
Awesome