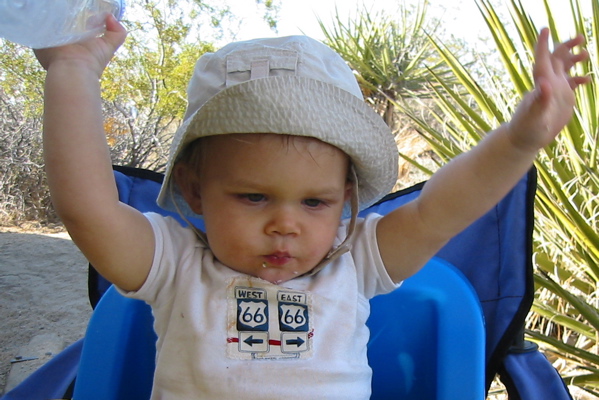 A father helps his son replace the boob with the road.

When young Jasper, our first, came to that remarkable, frightening, and eminently enviable age of thirteen months, his manual dexterity having nearly reached a par with his appetite—and my wife too frequently finding her blouse unbuttoned (or rather de-buttoned) in public—I took it upon myself to cure the boy of his once-happy relationship with his mother’s glands. Thereby to introduce him to the wide world beyond. And to liberate us all.

Anytime after a year, said the pediatrician.

He’d successfully weathered his first slabs of dark-chocolate cake, had begun to stand on his own stubby feet for seconds on end, had shown a precocious interest in beer bottles and off-width crack climbing. Now seemed as good a time as any. Why drag it out? I remarked to him one evening while changing his diaper. All good things come to an end. 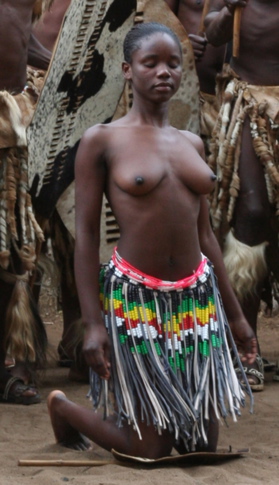 How is a boy to give this up?
Photo: Wikipedia Commons

But how to get it done? The experts are split on the subject. Today’s online chat community will generally recommend doing it gradually—taking away one feeding at a time over the course of weeks, or even months—the idea being: (1) to ease the physical transition for the mother; and (2) to limit emotional stress for both parties.

As for the first part, I can’t claim any expertise (it seems mothers over the centuries have developed ways of dealing either way—ask my wife: I know it wasn’t easy, but somehow she worked it out).

As for the second part, I’m not so sure: how can one gauge the relative stress on all parties resulting from the ongoing power struggles, the screaming child in one room, in the other the mother with her head beneath a pillow?

Versus, say, just cutting it short, using the whole episode as an excuse for the boy’s first real road trip.

The Zulu are said to dispense with weaning their children in a single day. A pair of researchers in 1956 observed 19 Zulu children “before, during, and after” what seemed to them a shockingly abrupt process. They expected all manner of trauma and other nasty Freudian complications. Instead, they found that the children quickly moved on to bigger and better things.

“Their manifest distress soon disappeared and was replaced by social activity and positive emotional states that indicated no traumatic impact.”

The plan was simple enough: a two- or three-day road trip in the desert, father and son, with plenty of distractions—and a copious supply of organic whole cow’s milk. Death Valley maybe. Or Baja. While Mommy got to stay up late with the breast pump, drink martinis with her friends, and sleep as late as she could.

A friend mentioned the Joshua Tree Music Festival. Perfect, I thought. He loves music. He’d been thoroughly pleasant at Coachella a week earlier. He’d been impressed with Los Amigos Invisibles, had enjoyed picking up cigarette butts in 100+ degree heat and crawling around the polo field amongst the empty plastic cups.

Even when the security forces wouldn’t let him into the beer garden, he’d kept his cool. It wasn’t until the Madonna set that he’d wanted to go home. 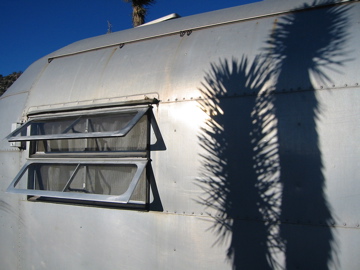 The fuselage in California’s High Desert. Photo by Author.

We snuck out before dawn. It was mid-May. The AC in the Land Cruiser had been out of commission since the latter days of the Reagan era.

The Department of Transportation’s Changeable Message Signs gave no indication of impediments to travel. Instead, they warned of a child abduction in progress: Amber Alert. Someone had made off with an 18-month-old boy and his aunt, who happened to be “the suspect’s estranged wife.”

Strapped into his torture chair, with the blue air of morning gusting through the cab at seventy miles an hour, my own boy slept—like a baby, they say (they who do not know better)—while I set a direct course for sunrise in the Mojave.

At Rancho Cucamonga, just before the 15, we hit a bottleneck. Jasper woke with a start, only to find the breeze stopped dead, the heat coming up faster than the sun. Ever since his inaugural automobile journey—the one from Cedars-Sinai east across town on Beverly—he’s had an aversion to traffic. He wanted to be moving. He wanted out. And he was not pleased to see the last curds of breast milk already long drained from his bottle.

He began to cry (like a baby, they say).

All around us sat suspicious commuters in enormous aerodynamically-shaped vessels worth more than perfectly habitable two-bedroom houses in Oklahoma. He began to scream. People looked. He began to make shrieking noises. One might have imagined I was peeling back his toenails. I rolled up the windows. 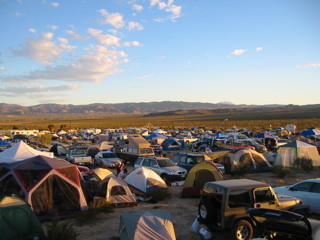 Magic Hour at the JTree Music Fest. Photo by Author.

Which was about the moment my wife called to see how we were doing (just fine, I said, over the howling), and to let me know that I’d forgotten the bag she’d packed (oops)—the one with his diapers, wipes, shoes, and all his clothes.

No problem, I said. We’ll work it out.

And so we did. We purchased some distressingly cheap threads from the sale racks at a department store in Yucca Valley, likely the handiwork of recently-weaned children in Malaysia.

We set up our camp along the barbwire fence at the edge of the campground, as far away from the stages as we could manage, and began to ferry water for the wading pool. By the following morning, with the desert heat rising once again, we awoke to find all manner of glass-eyed and benevolent hippies resting weary heads beneath the fringes of our shade.

After three days and three nights of curdling heat, cold pizza and applesauce, gale-force sandstorms, stinking porta-potties, impromptu drum circles, and all-night high-voltage folk-electronica—one cold six-pack from the trailer fridge traded late in the weekend for an extra gallon of 2%—the thing was done.

When his mother showed up on Sunday (her breasts, alas, still sore), Jasper, for his part, was thrilled to see her—no longer merely as a necessary and friendly appendage to those aching glands, but as a person: someone he could clink bottles with (plastic to glass), dance with, travel the world with. Someone who, for years to come, would be willing to cook him hot dogs and pancakes and Bengali lentils, would occasionally use psychological means to cause him to eat asparagus, and often, when conditions were mostly right, serve him ice cream in a cone. 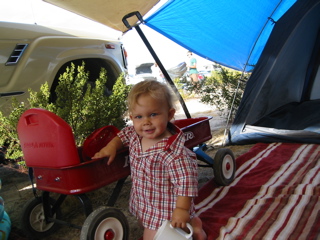 Home on the road. Photo by Author.

Jasper survived the next three years rather admirably, I thought. He seemed as, er, well-adjusted as any of the other small animals I had met from his generation.

He wore underwear, dressed himself, skied without a leash. He knew his letters cold. And could occasionally be convinced to shovel toys onto shelves, or refrain from trying to squash his little brother’s fragile skull, in exchange for a small dose of sugar, or the promise of an extra story at bedtime (or the threat of one less).

Beckett, on the other hand, was just getting started. And so one day young Jasper and I, busy as each of us happened to be that early December, agreed to commit a full week’s time to introduce the little fellow, on the eve of his first birthday, to the wider world beyond the maternal comforts to which he had always been accustomed. And in the meantime give Mommy a chance to do some real skiing.

The plan: a 32-hour boys-only round-trip train journey from California to New Mexico—riding the old rails along Route 66, across the Great American Desert—for an early-winter visit to his grandfather’s garlic farm.