WHEN I FIRST THOUGHT of Batanes, I imagined high, stern cliffs and empty fields. I thought of wind. I heard of a town where people still use dried fish as currency instead of pesos. Thinking it would be cold, I wore a knit cap in anticipation.

When Filipinos say Batanes is the most remote island region in the Philippines, they’re not just talking about its faraway location. Cast in the middle of the South China Sea’s typhoon corridor, the weather plays a factor in Batanes’ isolation more often than its middle-of-nowhere coordinates. But it’s also remote in a deeper way: Filipinos observe that the world of Batanes is “Filipino” by definition, but also very foreign–perhaps the most alluring kind of remoteness. 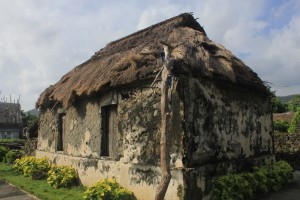 One of Batanes' many old buildings.

One of the few restaurants on the island of Batan doesn’t even have servers. It’s called, aptly, Honesty Café. Diners leave behind however many pesos they like for whatever items they want. There aren’t even many cars or jeepneys making the characteristically Filipino diesel racket on Batanes’s few roads. Just motorbikes—or bicycles and walking, when the island runs out of diesel because refueling ships can’t make it through the rough waters.

And with rough waters comes equally rough winds–that part I got right about Batanes. My first flight into Basco was canceled because a typhoon was blowing through, and the pilots couldn’t even see Mount Iraya; without the sight of that peak, a tiny passenger plane would inevitably crash in the rainy mist.

When I arrived a day later I realized I was wrong about the cold. The sun was high. Batanes’ air was humid like a big, sweaty hug. “It’s tropical Scotland,” I remembered my friend telling me. I took off my cap. It felt like a gesture of respect for this very different Filipino island. 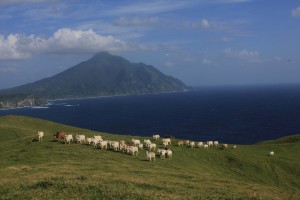 Batanes lacks that urban apprehension and crowding I’ve grown accustomed to in Manila. The police here must be the most bored in the world, dealing with only a few drunk motorbike drivers—probably their near or distant relatives—and the occasional incursive Taiwanese fisherman. There is no need to look over my shoulder here. I only feel required to look for a long time at the coastline. Ah, diyos, that coastline. It reminds any visitor that Batanes’s appeal is parallel to its inaccessibility, as is often the case with such visceral beauty.

The island’s landscape is so stunning, it’s accident-inducing. My friend Nicole is a focused, licensed motorcycle driver but on her first day here she bumped her motorbike while her gaze drifted off, caught in the waves rolling along the black-bouldered coast. The curve of the main road embraces the length of the island in a slender line that goes on and on, while the sleeping volcano, Mount Iraya, stands sentry over it all in the dusk-dimmed, windblown sky. On the island’s interior, uninhabited farmland undulates with sky-sized green fields, touched only by herds of lazy white cows.

I never found that place where they still accept dried fish as currency. I was tagging along with Nicole’s first Filipino-American homecoming to her ancestral island, and upon our arrival in the small village of Uyugan, her aunt and uncle kept feeding us, refusing to accept any currency at all in exchange for their kindness. We ate uvud, local fish-and-meatballs. A tinola soup made from the chicken her ten-year-old cousin had slaughtered. Pork done four ways. Lobster caught from the shore. Raw, green fern salads with tomato. Some of these we received through the always wide-open front door from neighbors bringing extra from their own harvests. 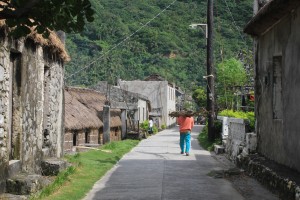 Passing through one of the village roads in Batanes.

Nicole’s aunt and uncle are sixty-something farmers called Mama Em and Papa Ed. When we say only their nicknames to people seventeen miles away in Batanes’ capital, Basco, strangers nod and say they know them. Mama Em and Papa Ed farm their own plot of land, and like most residents of Batanes, they eat only what they cultivate, preferring their own produce over the pesticide-laden imports from the mainland.

We followed them by motorbike to their plot one day. It was pouring rain. Mama Em and Papa Ed fed their baby pig a homemade meal, the liquid feed strapped to Mama Em’s back in a recycled bucket. The pig was small, spotted, and in a few months, fat enough to eat. Mama Em patted him as he snuffled and ate. Papa Ed climbed a tree to cut down two young coconuts for us. At home in Uyugan, Papa Ed split the coconuts with a swift swing of his bolo. I ate mine in concentrated silence, honoring its tender sweetness, scraping the last bits of soft meat out of the green husk with a spoon. 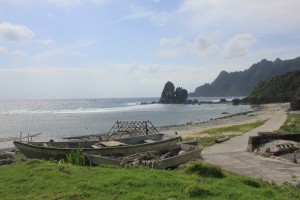 Old, dry boats are scattered across the Batanes coastline.

In between the many meals, Nicole and I spent whole days exploring the thirty-five kilometers and four towns of Batan island by motorbike. The main road here is all high edges and narrow curves, and though it’s over a hundred feet, the sea often lapped up to splash us with saltwater after a strong gust of wind.

We stopped to observe the shore, picking our way through the chilly water to watch the tide rising or lowering, or to catch the sunset blazing on the coastline. We clambered the hills overlooking the capital town of Basco, too, and gazed up at the capital’s lighthouse. A brown goat with a long leash trotted down the lighthouse meadow, looked at me, then nibbled on my pants. Goats were always watching us in Batanes, our slightly interested animal audience.

Batanes’s remoteness, rough wind, and battering sea all require a slowing down, a restructuring of daily priorities. You’ll eat only what you work from the island soil; you’ll leave or arrive when the island determines that you will. I realized I had come to Batanes a little hard-bitten by Manila: I found myself angry enough at some cab drivers, traffic, and slow servers that I was slamming doors harder than I meant to. 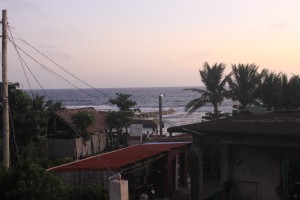 A rooftop view of the Batanes sunset.

But in Batanes there was no room–nor need–for that kind of urban impatience. The coast slowed me, and I welcomed it. At night, when I climbed to the roof of Mama Em and Papa Ed’s house, I stared out at the vast expanse of stars, previously hidden from my sight behind the steady smog in Manila.

1. Motorbikes are about 1,000 pesos ($28) per day, available at the local gas station in Basco. Bicycles are also for rent at various inns. Jeepneys ply the main road, but their schedules are erratic. A good, friendly resource for transportation and lodging is Lydia Roberto at Hiro’s Café on Abad Street in Basco.

2. By motorbike, the distance of travel from the capital city, Basco to the surrounding villages is as follows: Mahatao is 6km, 15min. To Ivana,15km, 35min. To Uyugan, it’s 19km, 45 min. Take note of the sandy beaches between Mahatao and Ivana, and be sure to stop at any swimming spot you like: the entire island is surrounded by a coral reef that keeps rocky swimming coves shallow.

3. There are a few restaurants along the road south of Basco, if you’re not lucky enough to have relatives to cook for you in the area. There is also a fast food vendor selling addicting, sweet grilled camote, and another vendor selling warm taho (sweet tapioca) in the morning. 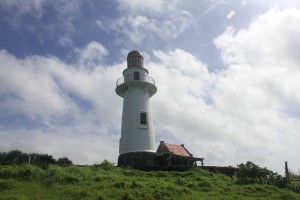 One of Batanes' many lighthouses.

4. Look at the limestone homes that survived the Spanish period of colonization before the 1800s. Travel the interior farmland of the island, Marlboro Country. Look at the lush trees; they’re protected by law, and residents must ask permission before cutting them down.

5. When in doubt, ask the locals. They’re inquisitive and friendly, and they’ll help you stay fed and on your way. Say Dios mamajes: thank you, in the local Batanes dialect, Ivatan.

Tagged
Narrative Trip Planning
What did you think of this story?
Meh
Good
Awesome

Watch: Freakish and rare water tornado in Cuba astounds people
If you like hiking and you like beer, Washington State is the place to be
Woman describes alleged attempted kidnapping at DC hotel described in reviews as “sketchy”
The top cities for your next ‘quickie’ getaway
Why The Ranch at Rock Creek, one of America’s priciest hotels, is more affordable than you think