Syria is a nightmarish landscape, laid waste by the grueling and brutal civil war dragging into its fourth year. In the northeastern region of the country, Kurdish-controlled territory that the Kurds call Rojava (it extends over parts of the Syrian provinces of Al-Hasakah, Ar-Raqqah, and Aleppo) is the exception. This quiet agricultural region has been spared the worst of the war’s brutality. The Kurdish population here has thus far refused to overtly align with either side of the conflict, in a diplomatic position they’ve labeled “Third Line.”

It’s a revolution that appears to be working. As Assad’s regime focuses their fight on the rebels in Syria’s western regions, the Kurds in Rojava set up an interim government, local councils, and armed forces like the Kurdish People’s Protection Units (YPG) and Asayish (Kurdish police force). In stark contrast to the ruins of other Syrian cities, downtown areas of Kurdish controlled Qamishli are lively and appear untouched by the war raging a few hundred miles away.

This attempt at democracy and self-rule in the midst of an ongoing civil war isn’t without cost. The economy in Rojava is crippled and ISIS continues to attack its borders, wreaking carnage and terror as they fight to strengthen their “caliphate.”

Yet, a rare refuge in a country destroyed by civil war, Rojava is still experiencing this taste of freedom from Assad’s dictatorship, and the Kurds are fighting to hold onto it. In a voice both celebratory and proud, Mousa Mohammed, an elderly local Kurdish teacher in Qamishli, declares, “Our aim is freedom…We will succeed no matter the price.” 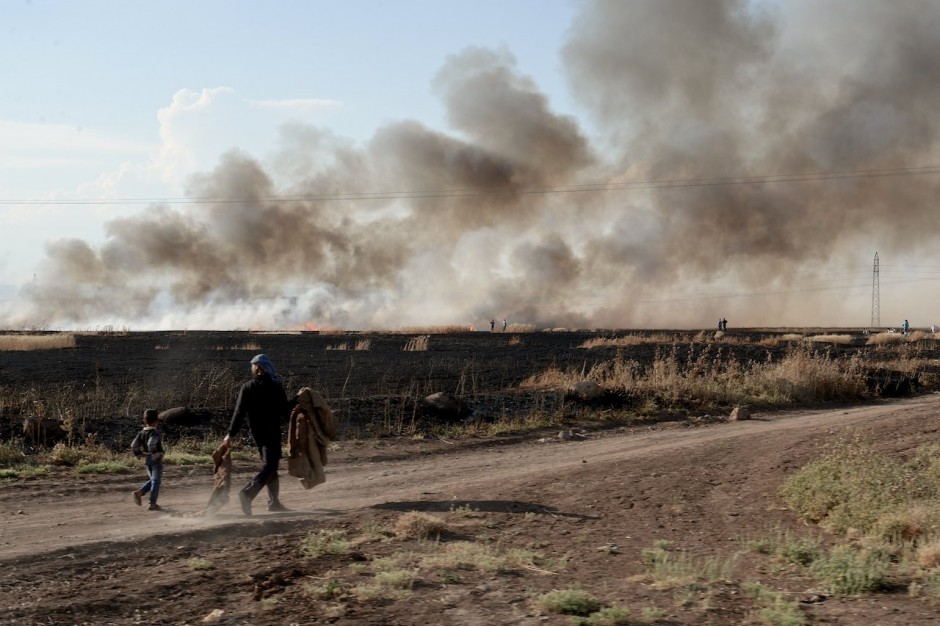 A man leads a young boy along a path in northeastern Syria, carrying blankets to help douse a crop fire. The region is primarily agricultural and the war has left it almost completely cut off from outside resources. Successful harvests are vital for the survival of local communities and fires like this can devastate entire villages. 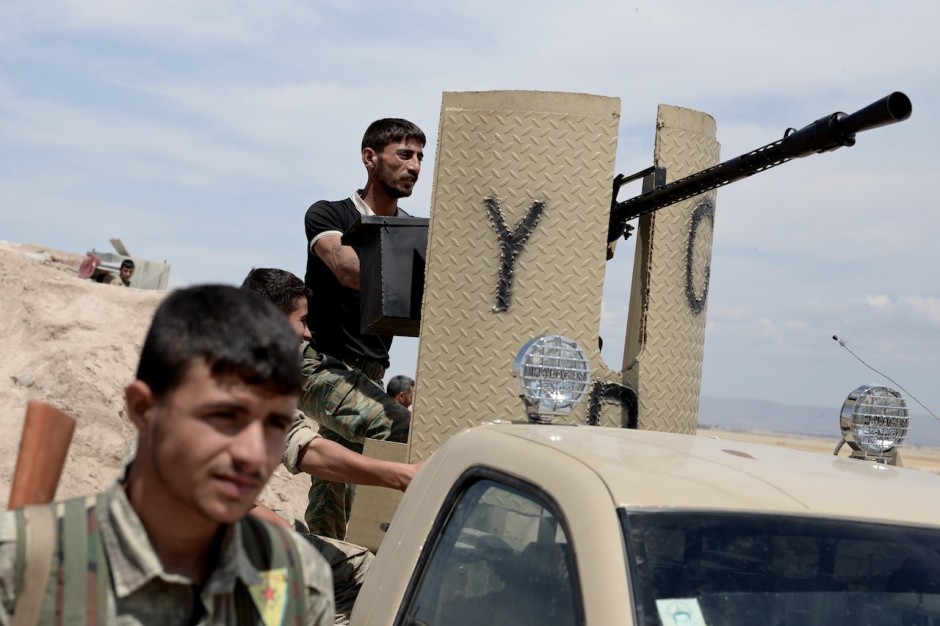 A YPG fighter maneuvers a truck-mounted DShK toward Islamic State of Iraq and al-Sham (ISIS) positions. 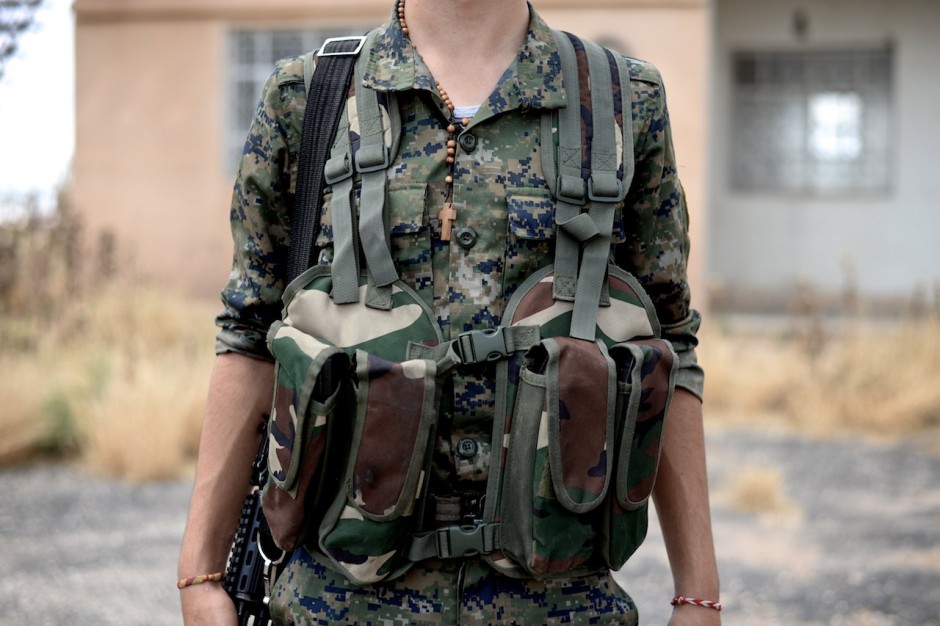 A young Syriac fighter stands outside a countryside home, a former ISIS base. The YPG successfully reclaimed this base south of Qamishli. The Syriac militias, who are primarily Christian, fight alongside the YPG defending territory against ISIS. 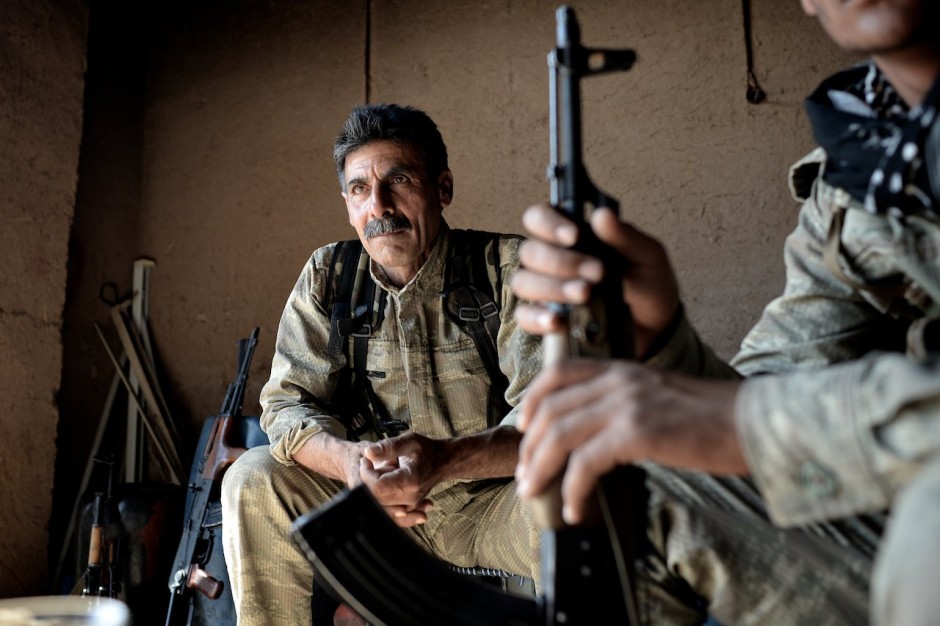 Rest at the front

YPG fighters rest at a frontline position in their war against ISIS. The sentiment from YPG fighters is nationalistic in tone. They feel they are protecting their homeland and the people that live there without ethnic or religious prejudice, a view echoed by a Kurdish civilian Izzedin Geddo: “We give our sons (to the YPG) for all people here, not just to defend Kurds.” 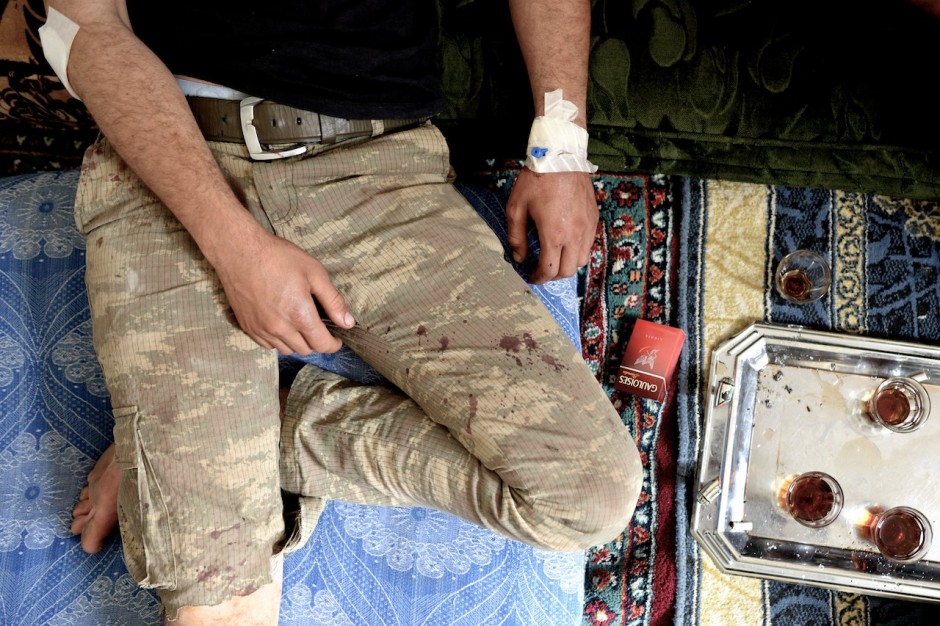 A YPG fighter rests in a field hospital after sustaining injuries trying to protect the village of al-Taliliya against ISIS. 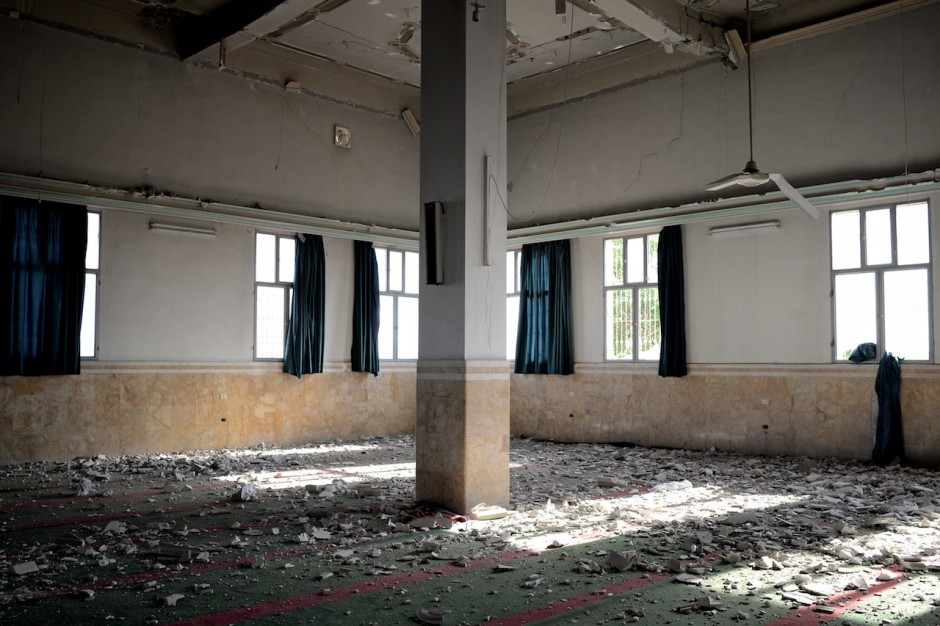 The interior of a partially destroyed Sufii mosque in the village of Til Meruf in northeastern Syria, reportedly destroyed by ISIS when they captured the town. 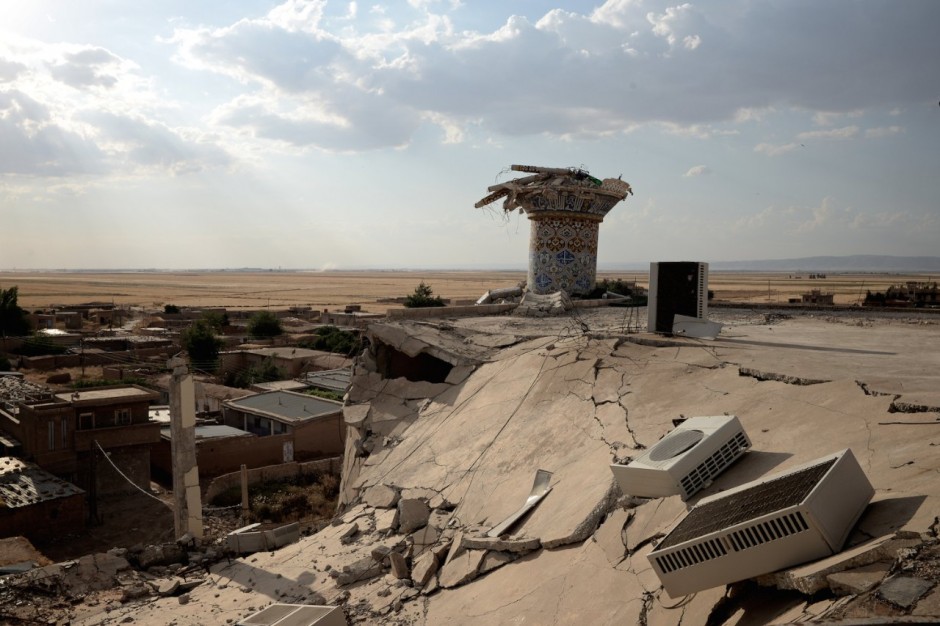 The roof of a partially destroyed Sufii mosque in the village of Til Meruf in northeastern Syria, reportedly destroyed by ISIS when they captured the town. 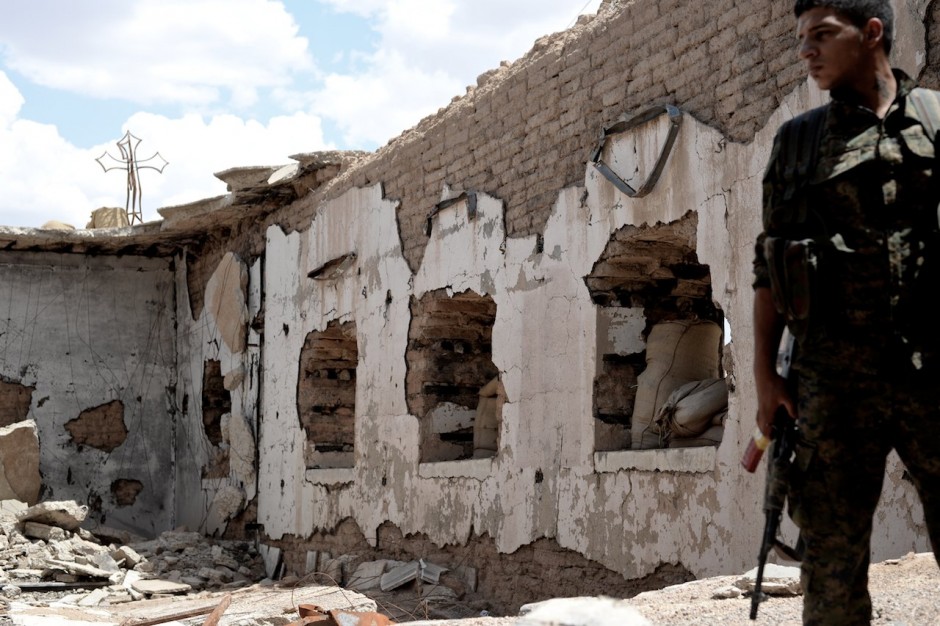 A young Syriac fighter stands amid a destroyed church south of Qamishli in northeastern Syria. ISIS reportedly destroyed the church when they captured the town. The primarily Christian Syriac militias fight alongside the YPG defending territory against ISIS. 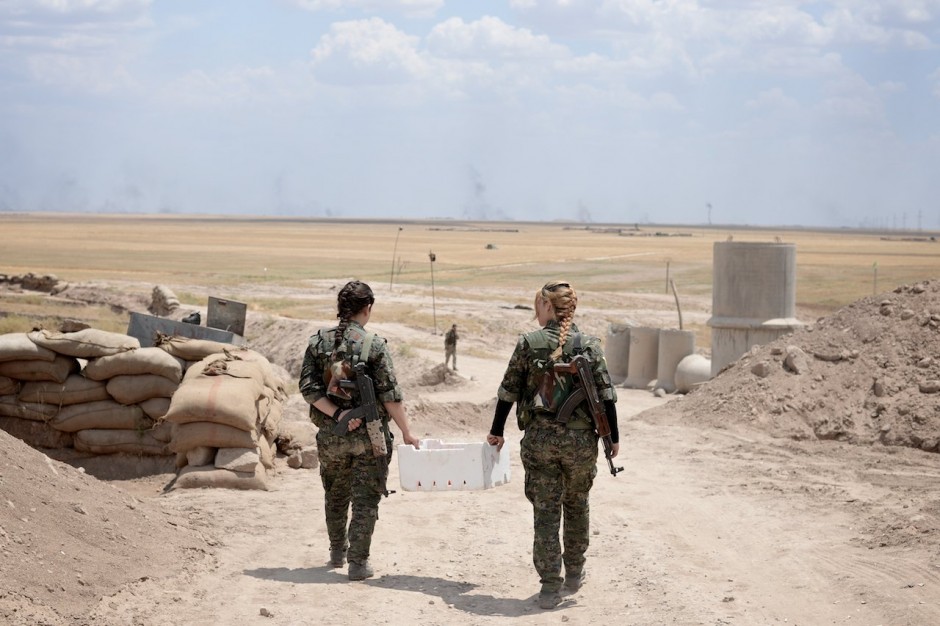 Supplies to the front

Two female YPG fighters carry a box of supplies at a lookout point at a frontline position in their war against ISIS in northeastern Syria. Smoke columns from makeshift oil refineries can be seen in the background. 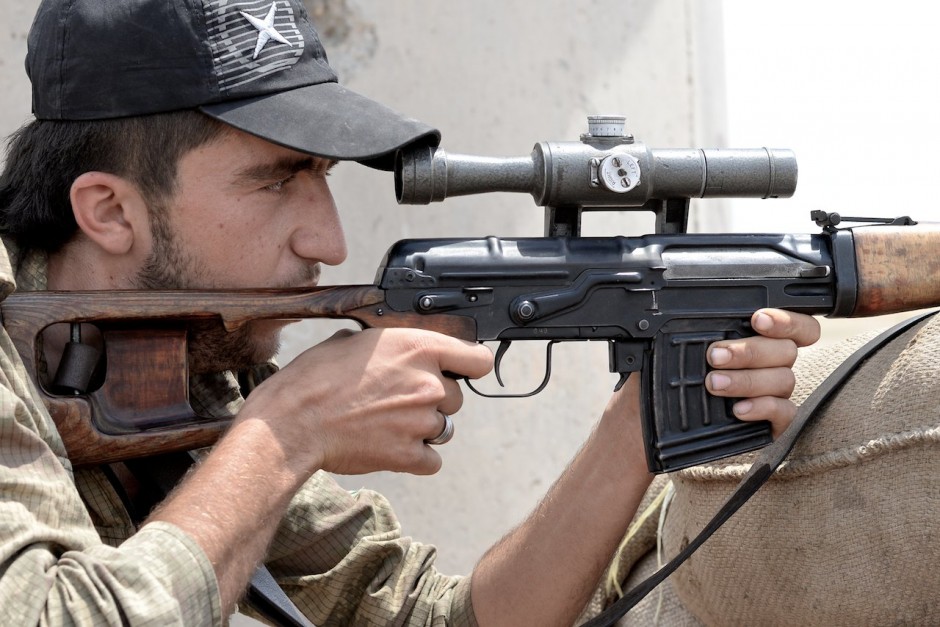 A YPG fighter scouts for targets at a lookout point in their war against ISIS in northeastern Syria. 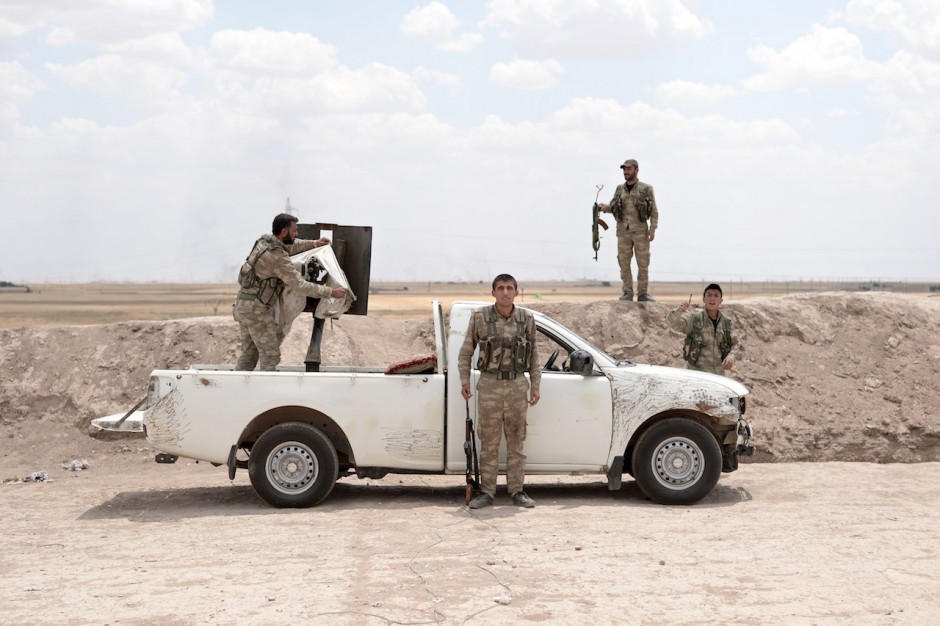 YPG fighters at a frontline position in their war against ISIS in northeastern Syria. 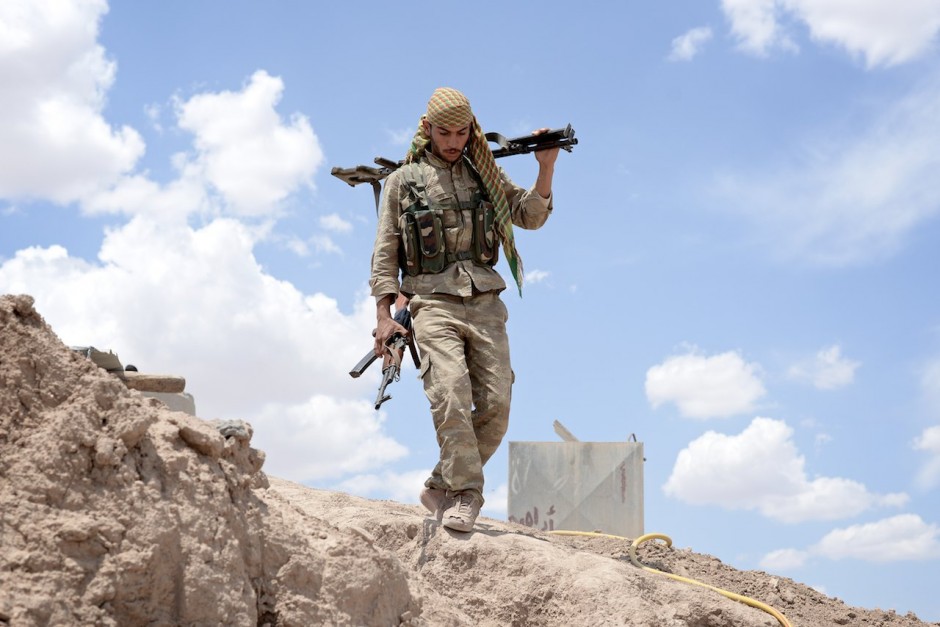 YPG fighter on the frontline

A YPG fighter descends from a lookout point at a frontline position in their war against ISIS in northeastern Syria. 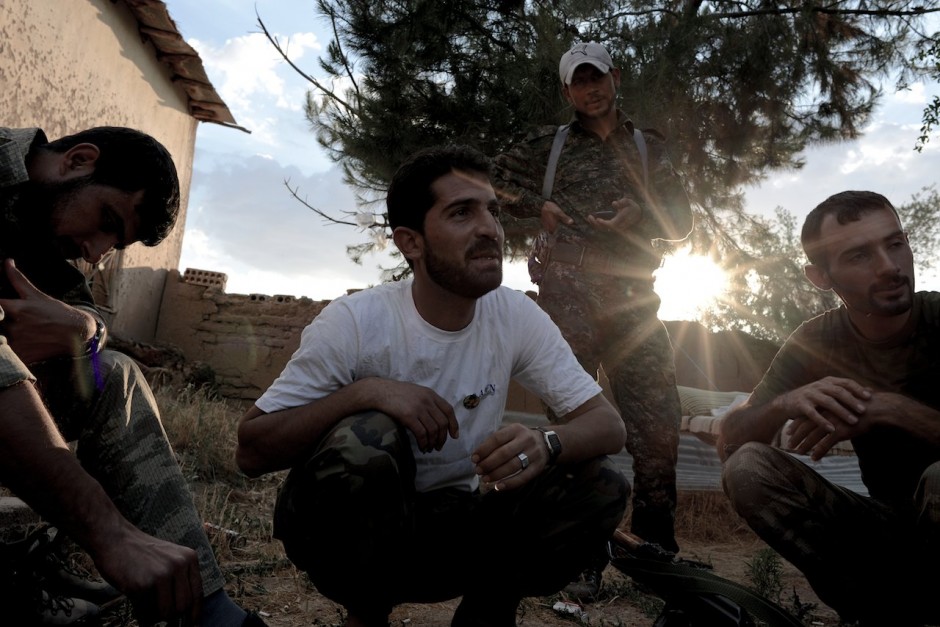 A group of YPG fighters enjoy a casual moment at the frontline position of Til Meruf in the war against ISIS. The YPG is isolated in three pockets of northern Syria, lacking the support or assistance of the international community. Their sole reliance on themselves, combined with the region’s insular history, fosters a common sentiment among YPG fighters, echoed by a commander (who asked that he not be identified by name), “We don’t need any help. We believe in our core abilities. We’ve seen America destroy other countries and not help people. We will not let any capitalist countries help us because after they help us they will take our oil and land. We depend on our people.” 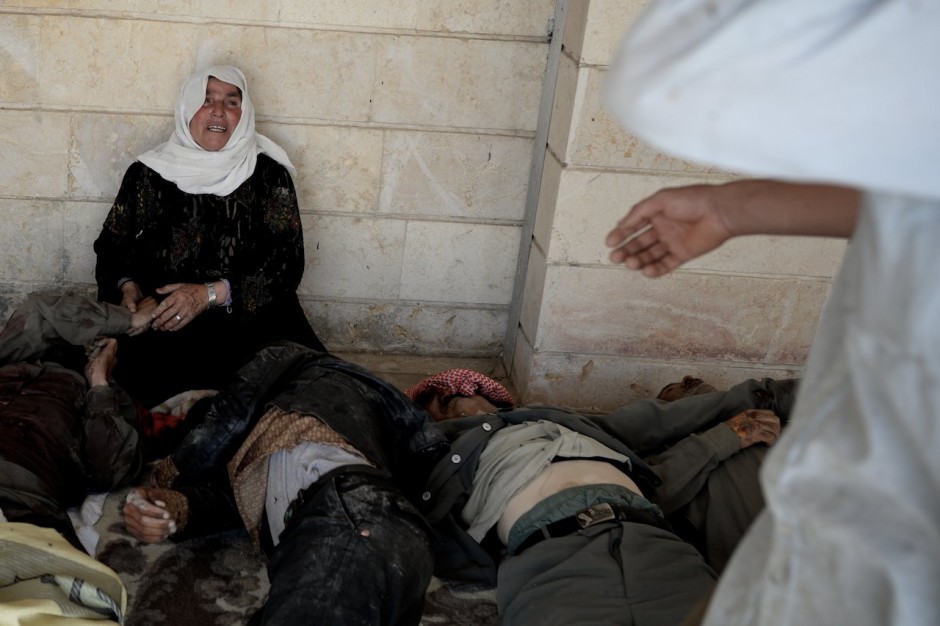 A woman mourns the death of her family members. ISIS attacked the family while they slept during the early morning hours in the village of al-Taliliya. Among the 16 people killed were seven children and four women; some had endured close-range, high-caliber weapon fire to the face. This family was a group of refugees from Aleppo that had fled to the Kurdish controlled region for safety. Both Arab and Kurdish civilians were killed in the attack. Despite the heightened security provided by the Asayish and the YPG, attacks inside Kurdish-controlled territory persist. ISIS is known for their frequent use of suicide blasts, car bombs, and brutal massacres. These tactics—and their first-hand broadcast on social media—are successfully striking fear and anger in the hearts of locals. 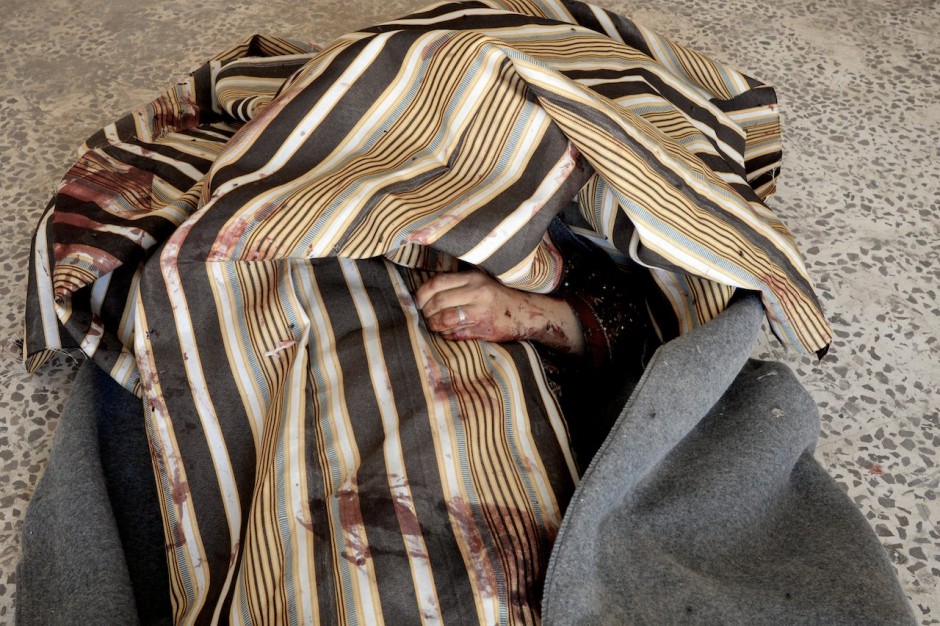 Killed in their sleep

A deceased woman lays wrapped in a blanket. ISIS attacked this woman and her family while they slept during the early morning hours in the village of al-Taliliya. Among the 16 people killed were seven children and four women; some had endured close-range high-caliber weapon fire to the face. 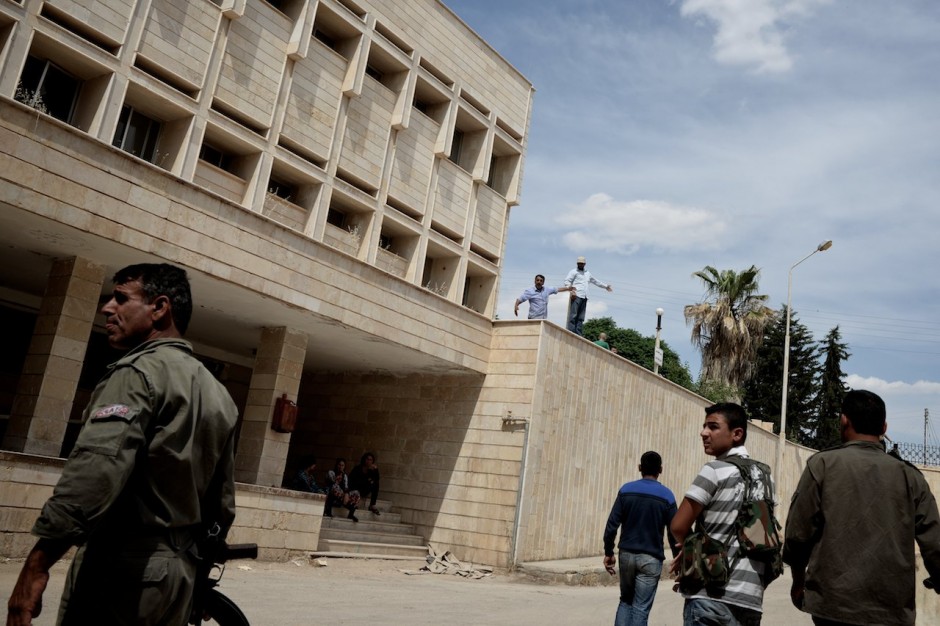 Bringing in the dead 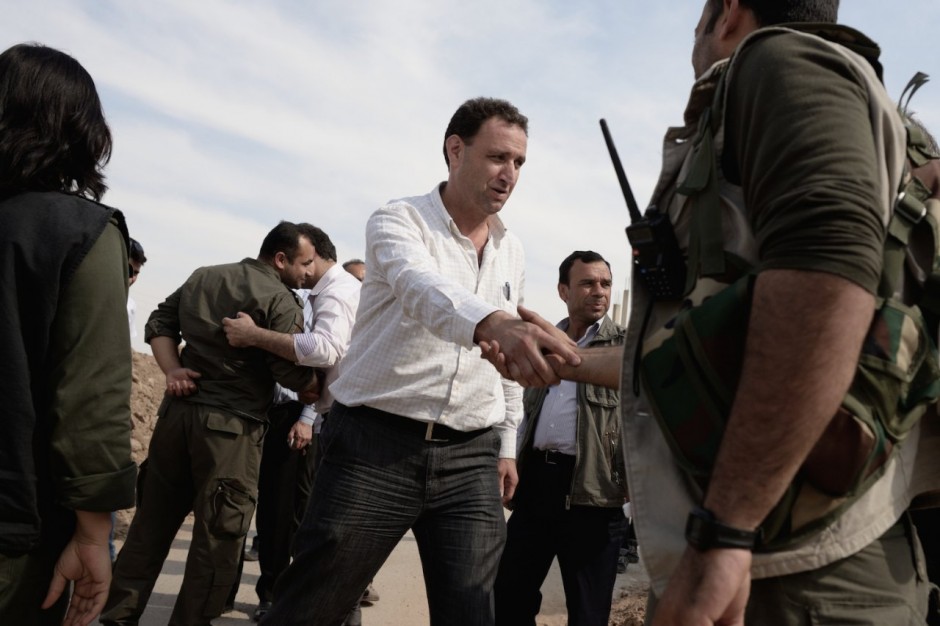 Akram Hasso, the prime minister of Rojava's Cizre Canton, meets with Asayish members before they leave to fight ISIS alongside theYPG. 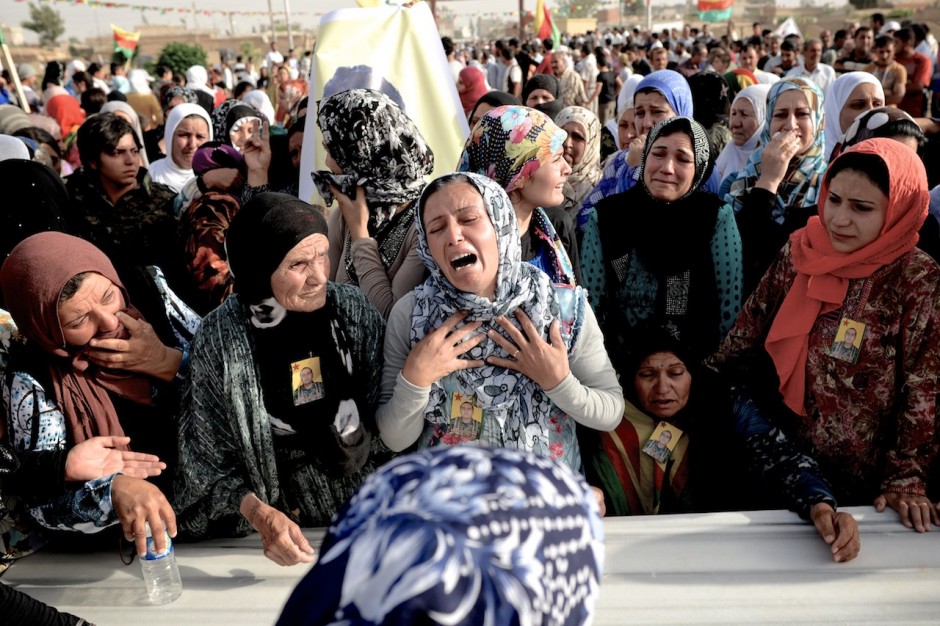 Women mourn during a funeral in Qamishli for six Kurdish People’s Protection Unit (YPG) fighters killed in clashes with the ISIS near al-Taliliya Syria. Killed while protecting Kurdish controlled cities against ISIS martyred Kurds are given massive funerals. 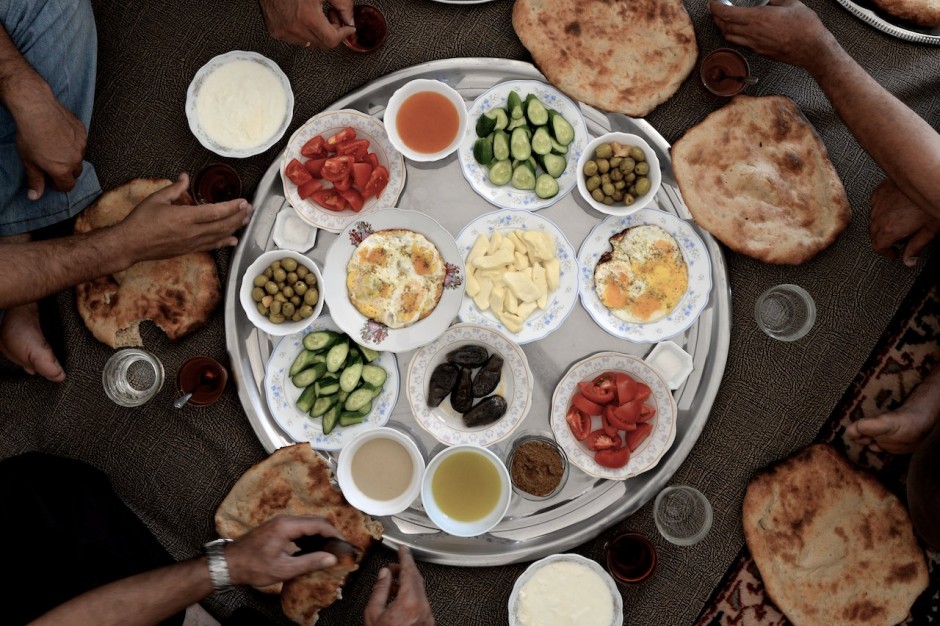 A group of Kurdish men share breakfast. This traditionally agricultural region is now isolated and without imported resources, rendering the people completely self-reliant for sustenance. Meat is a scarcity, reserved for special occasions and all food products are either made at home, grown, or made by neighbors. 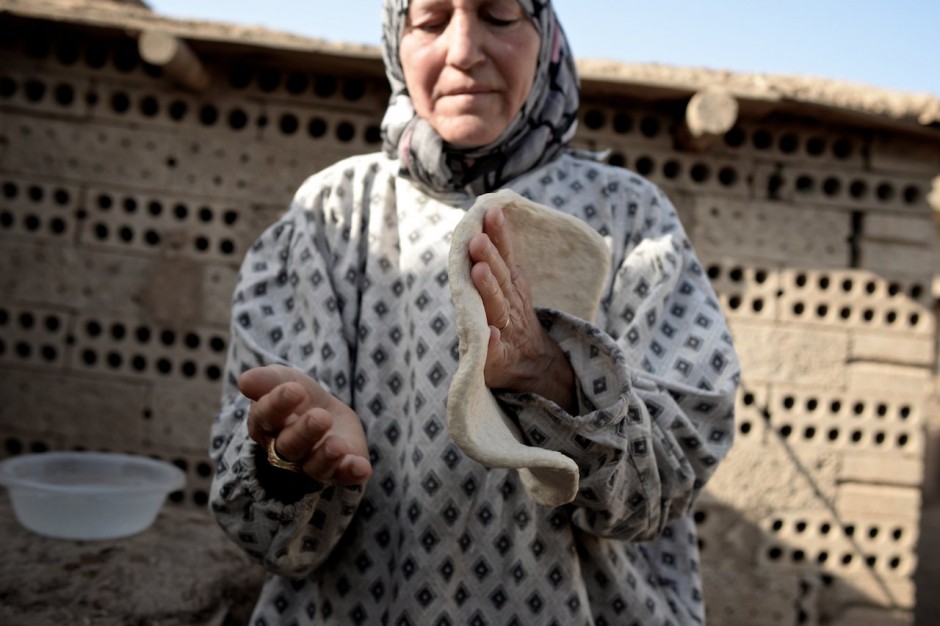 Mohammed Amin’s wife prepares traditional homemade bread made with ingredients grown in the community. This traditionally agricultural region is now isolated and without imported resources, rendering the people completely self-reliant for sustenance. Meat is a scarcity, reserved for special occasions. 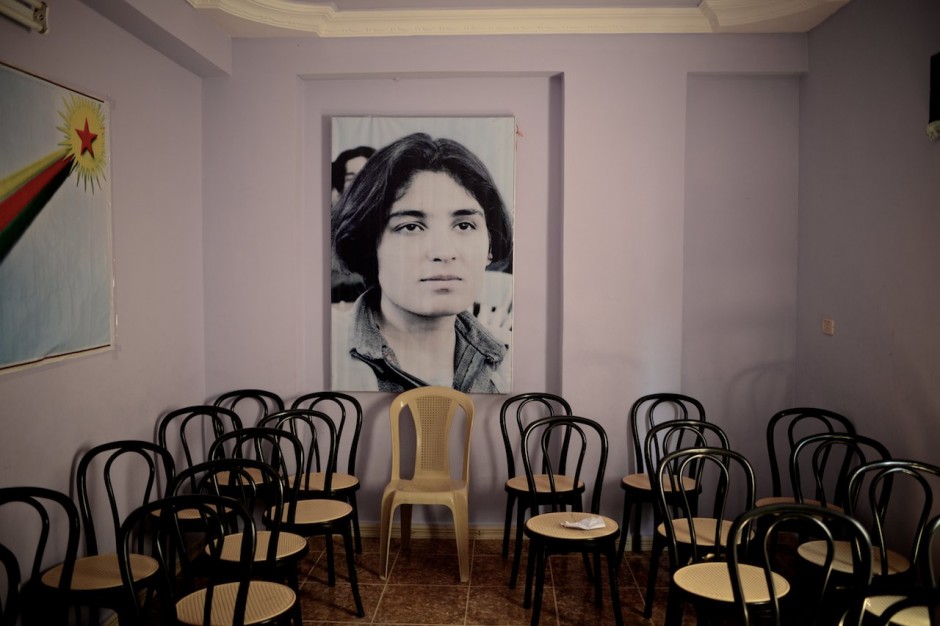 A place for women

A classroom for a local women’s committee, founded to help protect, educate, and provide healthcare for women in the community. This classroom, like the 21 other women’s centers located around Qamishli, is run by volunteers and serves as a place where seminars are held to help educate the local female population. Women’s rights groups are among many new grassroots organizations forming as the region gains its autonomy. 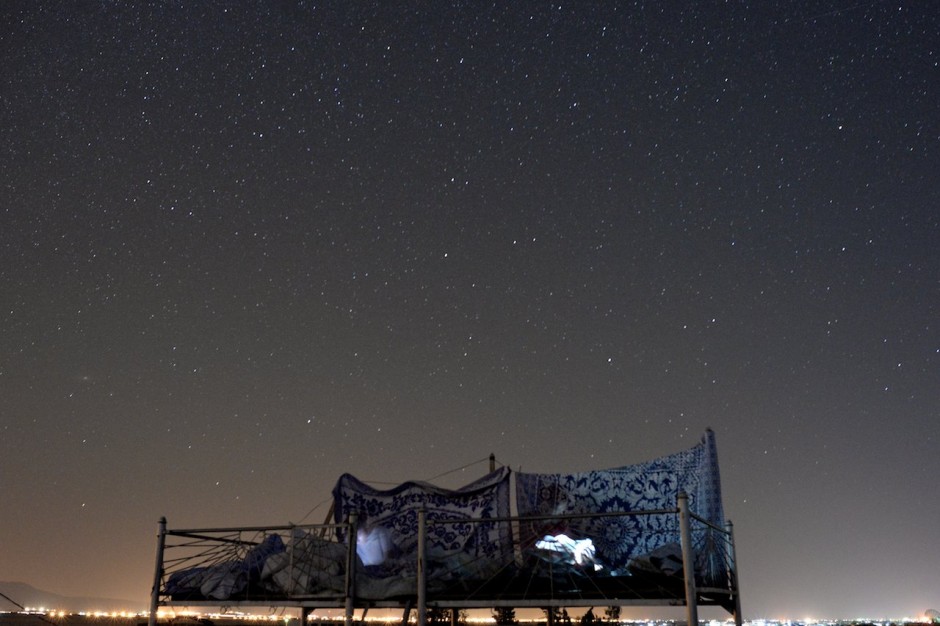 Two young men check their mobile phones while preparing for bed on the roof of their parents’ house on the outskirts of Qamishli. Lights from the Turkish border illuminate the background. Syrian cellular and internet services no longer work in northeastern Syria and the Turkish cellular service Turkcell is now used, when it’s available, for communications. Frequent power outages and fuel shortages make sleeping inside at night during the warmer months uncomfortable. People instead opt to sleep on large bed frames elevated above the rooftops of their houses to enjoy the cool night air. 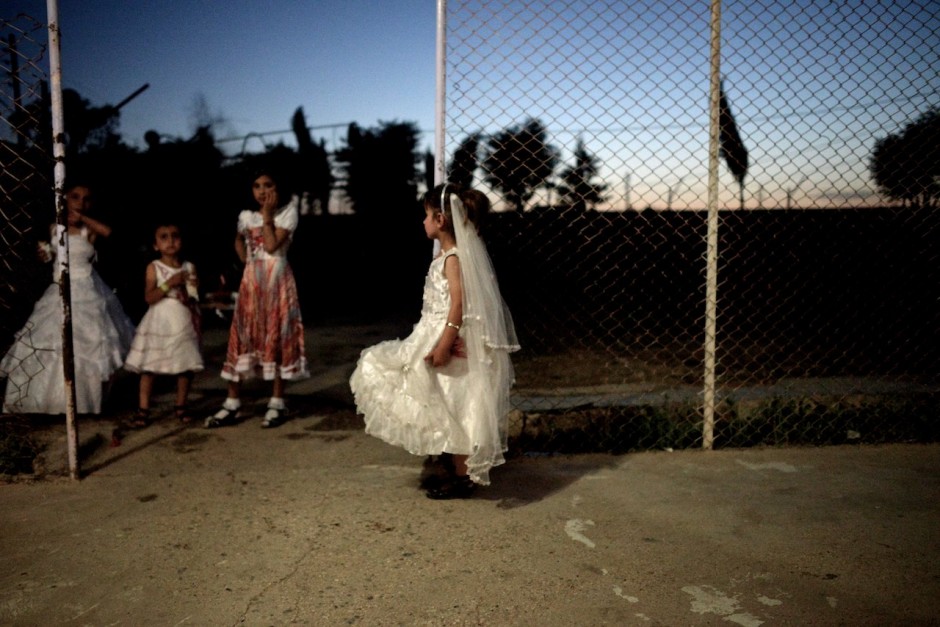 A sliver of normalcy

A group of young girls stand outside a wedding ceremony on the outskirts of Qamishli, the largest city in Rojava. People in Qamishli are trying to get on with their lives despite the war surrounding them, and marriages are celebrated enthusiastically. At the beginning of the ISIS siege on the region in mid-2013, the economy collapsed, making daily life in Rojava challenging and turbulent. One year later, the dust has partially settled, and an air of security has provided some level of normalcy for the people of Qamishli. 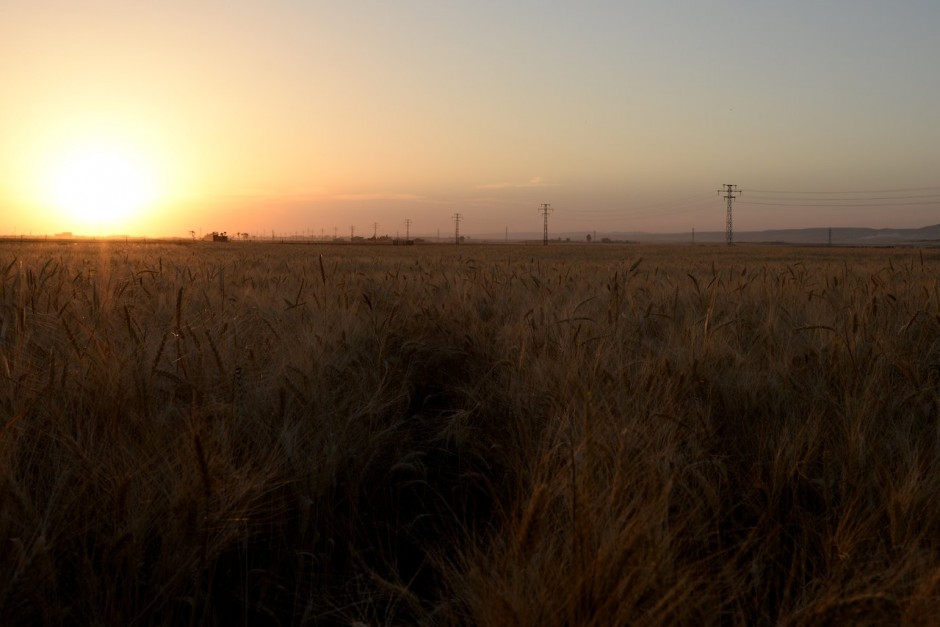 The sun sets over wheat fields on the outskirts of Qamishli.

Tagged
News Syria Ambassadors
What did you think of this story?
Meh
Good
Awesome
✖
travelstoke
Download the mobile app
stoked by