I was on a Kathmandu hotel bed watching a movie when the bed began to tremble. I felt curious and excited. I’d never been in an earthquake before. The shaking stopped and I went back to the movie.

A few days later, on April 25, 2015, I was researching a trip to Turkey on that same hotel bed when it started shaking again. I knew right away what it was, but this time the bed was not trembling — it was jolting. A 7.9 magnitude earthquake slammed outward from seven miles below the earth’s surface between Pokhara and Kathmandu. This wasn’t novelty. I was far more than curious and excited. This time the earth shook violently. 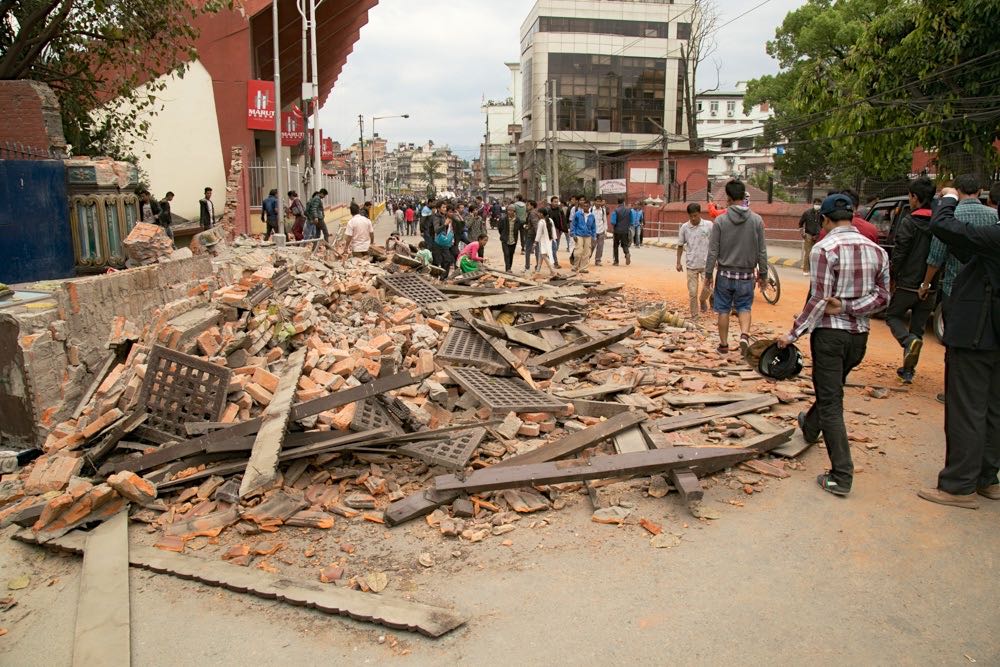 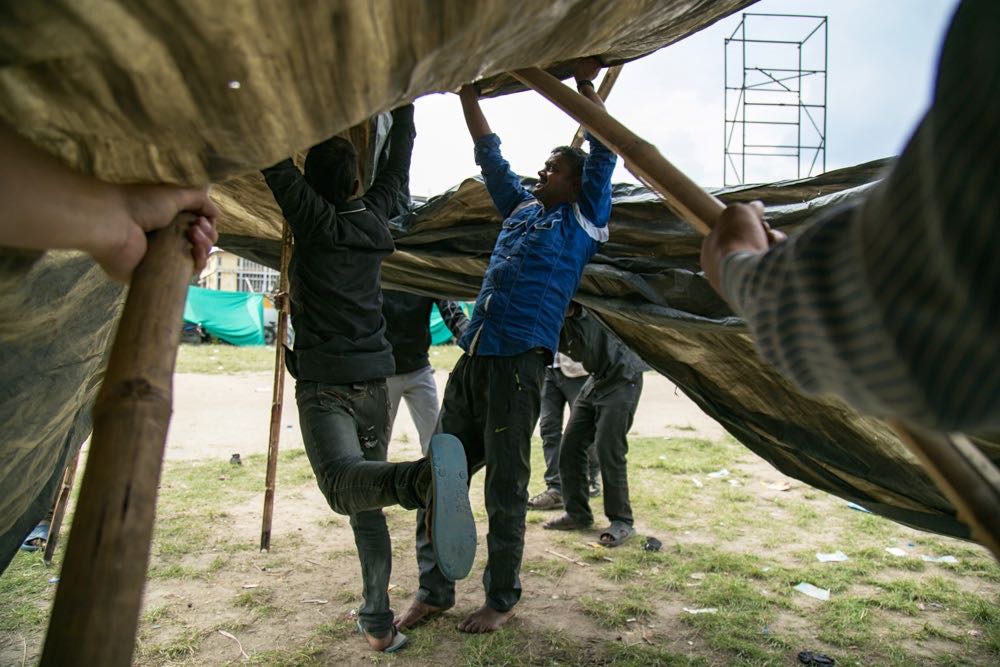 Adrenaline exploded into my bloodstream. I jumped off the bed. The floor shook even harder, then harder. I heard the rumbling — and crumbling — of Kathmandu, an ancient city besieged by the very earth it sat on.

I stood under the doorframe of the third-floor hotel room, the stairwell just ten meters to my right, a fluffy mattress to hide under just to my left. Stairwells are strong and sometimes stand when buildings fall. The facts flashed through my mind in a millisecond, but moving was nearly impossible because the shaking was so strong. My instinct concluded: “Just observe and wait for the moment to run.”

The deep rumble continued. I watched plants slam to the floor, paintings swing on the walls. There was nothing to do but wait. 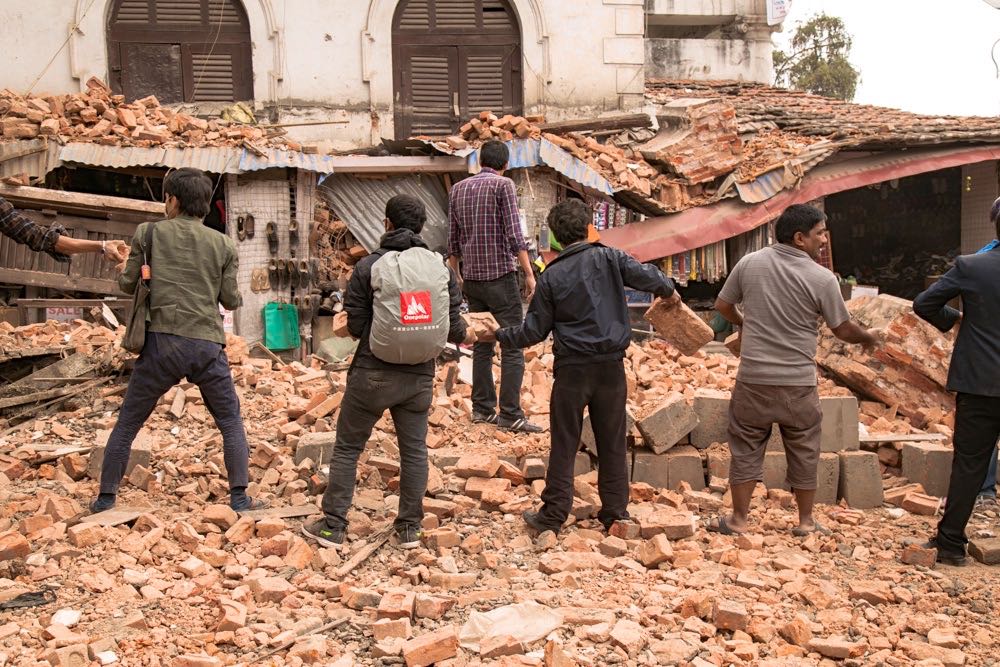 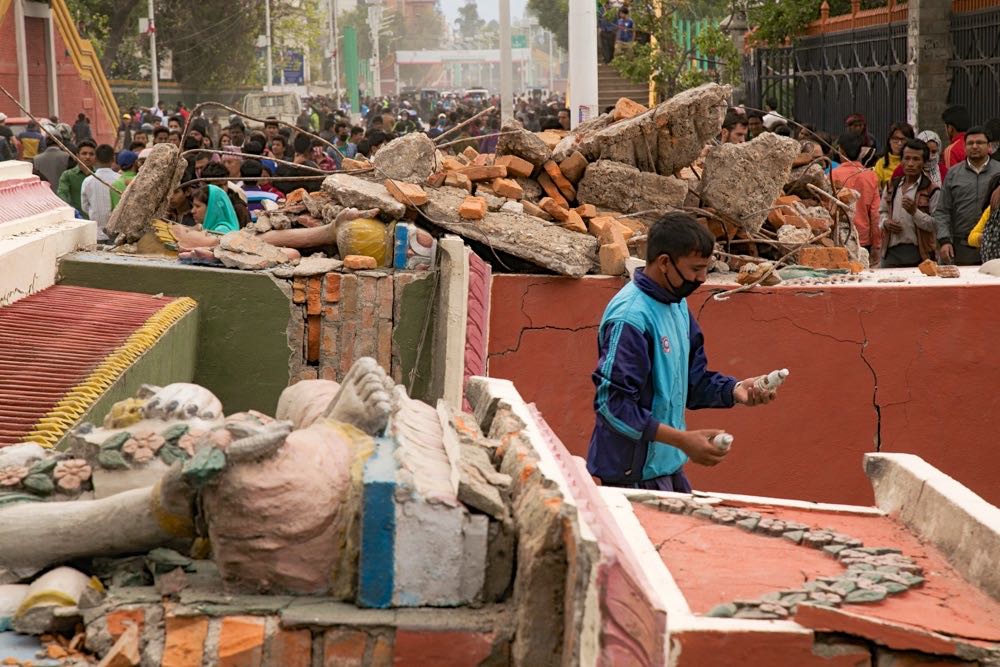 Finally after about a minute the quake stopped. I let go of the doorframe, and ran down the stairs. People huddled in the hallway. The woman from the front desk asked me “Did you see it?”

“I didn’t see it, I felt it!” I asked whether it was safer inside or outside, assuming the Nepalese staff were used to this kind of thing. “Inside,” a local man said. I looked past him. A wall near the dining room lay in ruins.

I ran back upstairs, grabbed my camera and went out into the narrow street. 20 meters at the end of the alley, was a fallen brick wall to the left, and on the right an empty road. I took the left, walking on rubble, and took the first photo. I made it 50 meters before an aftershock hit. People gathered in the middle of a parking lot nearby, a safe distance from any building. I ducked in with them. 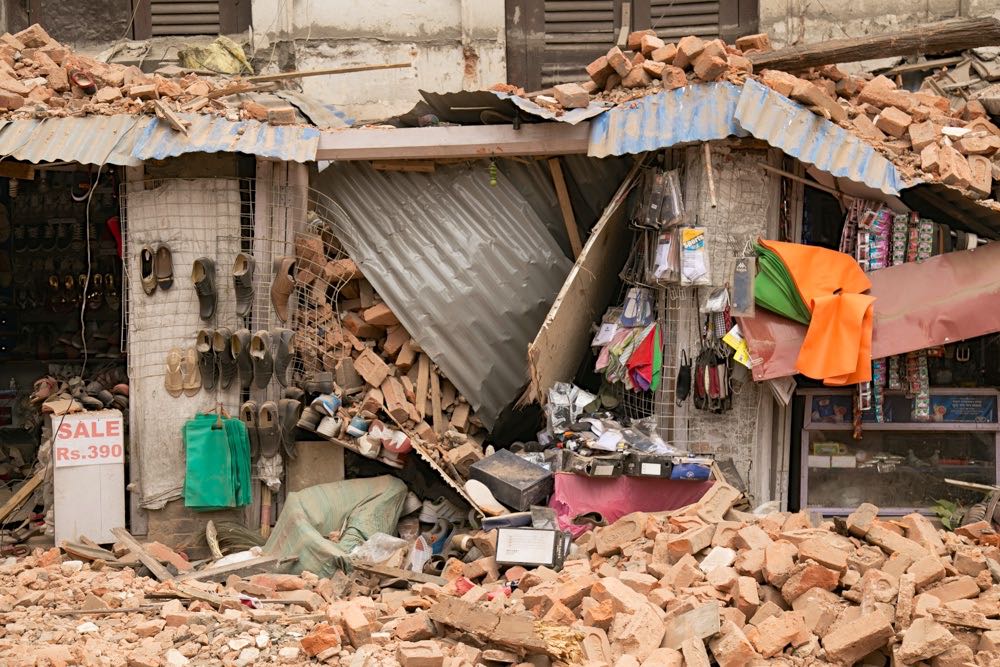 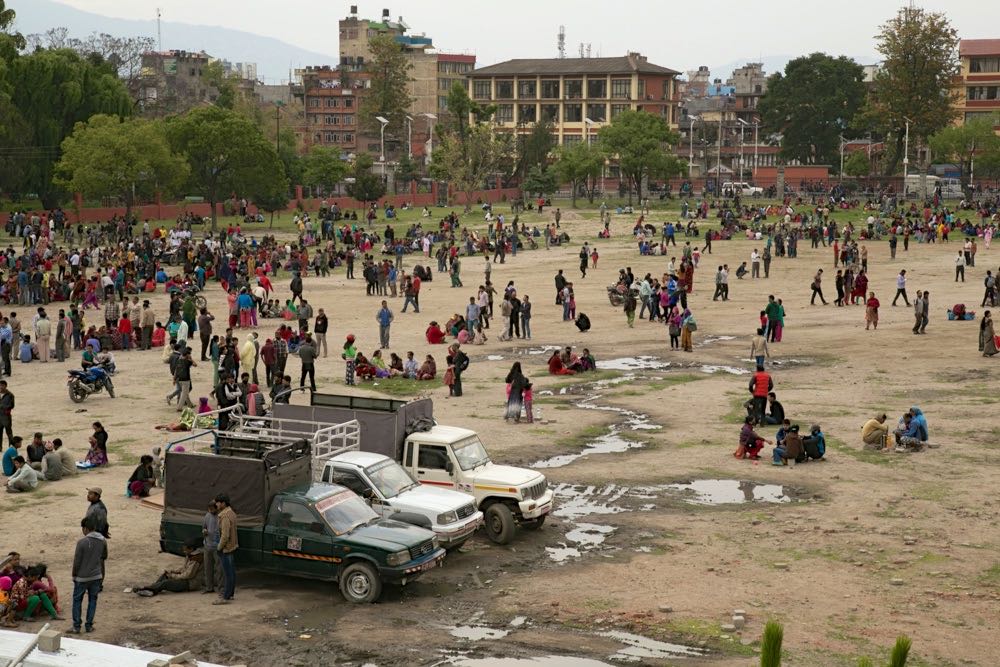 A Korean man and woman I’d met in the Mt. Everest region days earlier sat on the ground so I joined them. They had been in the street when it happened. “Bricks fell down from the building. We ran to here.” A frightened Nepalese woman joined us. I asked if she was okay. She pointed toward my hotel, “My house is over there. The wall cracked. I was so scared. My daughter is not here,” she cried.

Every time the earth shook the crowd screamed and moaned. Mothers held their children. The Korean couple held each other. Ravens crowed wildly above us. Helicopters flew overhead, always heading the same direction. “Stay here. We are safe here,” a man kept saying.

Almost an hour had passed when a small Nepalese man ran into the lot with a Chinese woman. “Does anyone speak Chinese? We need someone speak Chinese and English!” Three Chinese helped the sobbing woman. 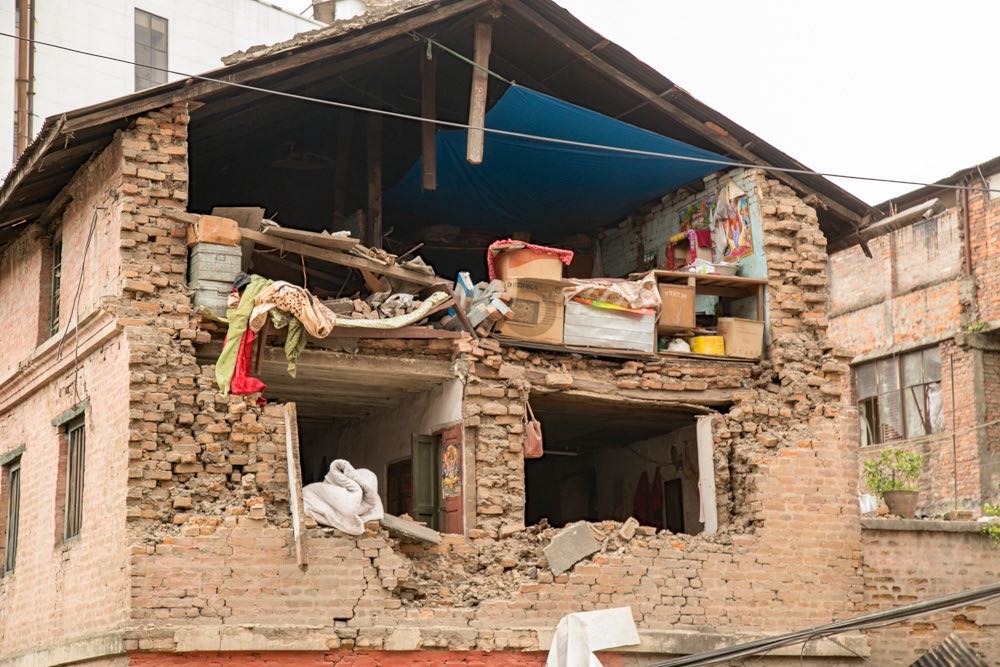 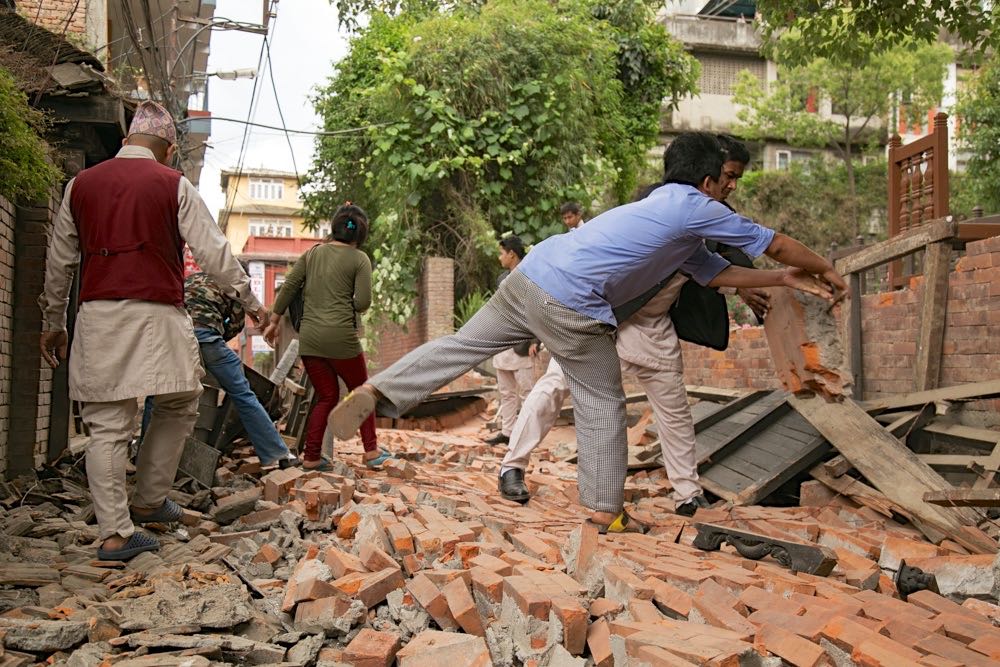 Blood stained her dress; she limped to a table to sit. Her brother had been injured badly and she couldn’t find her sister. The man that brought her pulled me to the side and told me that he saw her brother with a severely broken leg, his body bruised and covered in blood. He said he checked to see if he was alive, but he was not. So he had taken the woman away and told her that her brother would be taken to the hospital.

“Durbar Square is gone,” he whispered. “The temples fall. Our heritage is gone.”

Soon we knew. Within a half hour the news had made its way around the world. Though telecom services were largely down, a Chinese man in the lot had gotten word from his wife that the earthquake registered 7.7 on the Richter scale. A Chinese woman was walking around with “7.7” on her phone calculator screen, showing people that didn’t understand any of the spoken languages.

I decided to see what happened in the 2km between Thamel, the district we were in, and Durbar Square. Once I made my way from the narrow streets to the main road, I realized the scale of the situation. Thousands of people moved along Kanti Path, the main artery. Piles of rubble and bricks that were once walls had cascaded into the road, exposing living rooms and bedrooms, one room painted sky blue with an image of the Hindu god Krishna hanging from the wall.

I walked on and came to a large park that looked like a refugee camp. Helicopters landed and took off. On one corner was a building that had come down on top of a row of shoe shops. A line of men passed bricks by hand to uncover any victims. On the other corner were the four bodies covered in carpets and plastic.

Police, medical, and military vehicles raced down the street. The crowd parted to let the swerving vehicles through, narrowly avoiding being hit. A makeshift trauma center sprung up outside Bir hospital, scattered with dozens of victims covered in blood, IV drips running to their arms. 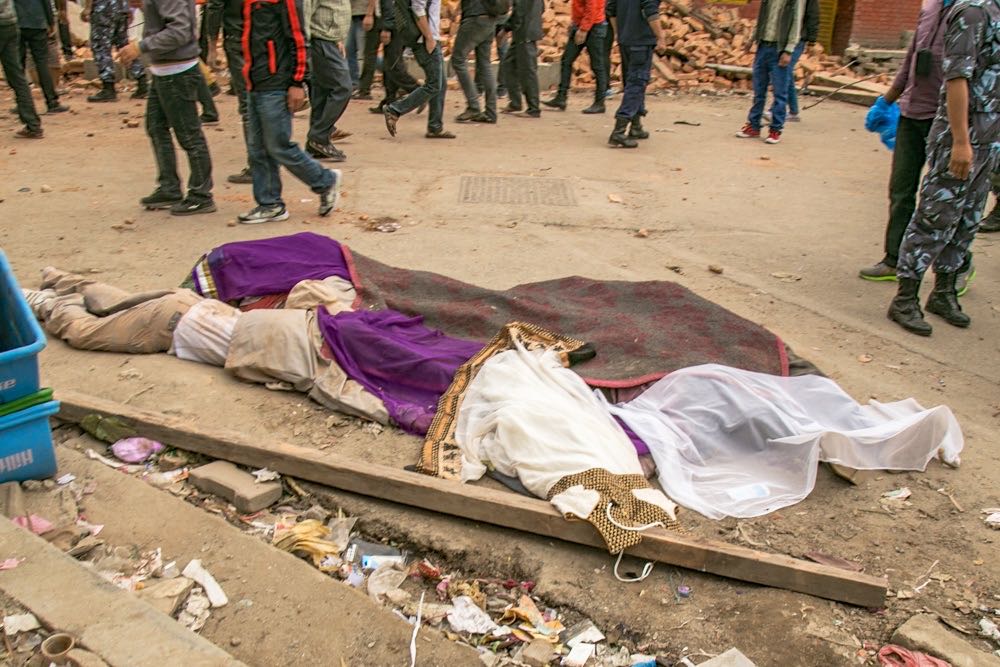 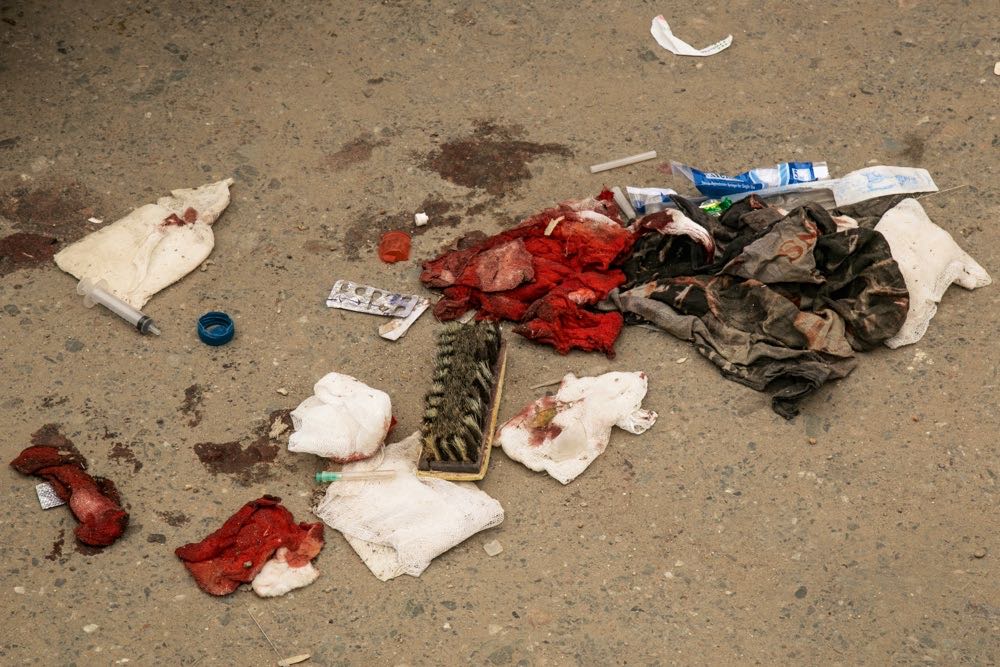 I found myself in a narrow, bottlenecked walkway near the fallen Dharahara tower. A police officer was hitting people in the face with sticks at the densely packed intersection, trying to control them like a herd of cattle. A heavy aftershock sent people into a panic. I was terrified we would all fall and I’d suffocate under a pile of equally terrified people. I could only imagine what the others were feeling. This was their home.

The way to Durbar Square was long and devastating so I decided to make my way back toward Thamel, back through the chaos I’d come through. Four hours had passed since the quake. There had been no cellular signal supporting data up until then, so I wasn’t able to let people know I was safe. I thought to make some offline posts in hopes that they would go through if and when the signal came back, even if only briefly. One Facebook post and a couple WhatsApp messages went through.

I headed back to the hotel, tired hungry and full of sorrow. I hadn’t eaten all day so I went out in search of food. The streets of Thamel, usually so packed with tourists moseying in and out of shops, café’s and trekking companies were dead. Each street was now just a line of closed and padlocked overhead doors.

After a coupe hours of searching I found a few friends and brought them from their damaged hostel to my hotel. We sat and talked. At 9:30pm Facebook sent a notification: “Are you OK? It looks like you’re in the area affected by Nepal Earthquake. Let friends know you are safe.” It wasn’t working smoothly, but eventually it sent my “I’m okay” message. After that the electricity and phone signal cut out.

I went to my room and lay on the bed trying to sleep. I wondered if we should be outside in the parking lot. But it was cold and the city was dark. There was a chance of rain. Would standing in the wet and cold be better than hearing the creaking noise above my bed? Was it the last sound I’d hear before the ceiling collapsed on me? When the generator went out, the safety lights went out and the room was pitch dark. There was pure silence, except for the creaking above me. All through the night, the aftershocks rumbled, bringing with them the sound of people screaming outside my window. All I could do was be thankful I was safe so far and wonder if I would continue to be.

NarrativeDiary of the Nepal earthquake: Part 2

Tagged
Narrative Student Work Nepal
What did you think of this story?
Meh
Good
Awesome

14 mind blowing images of night skies from around the world

A photographic journey to Everest Base Camp