Read part 1 from Diary of the Nepal earthquake here. 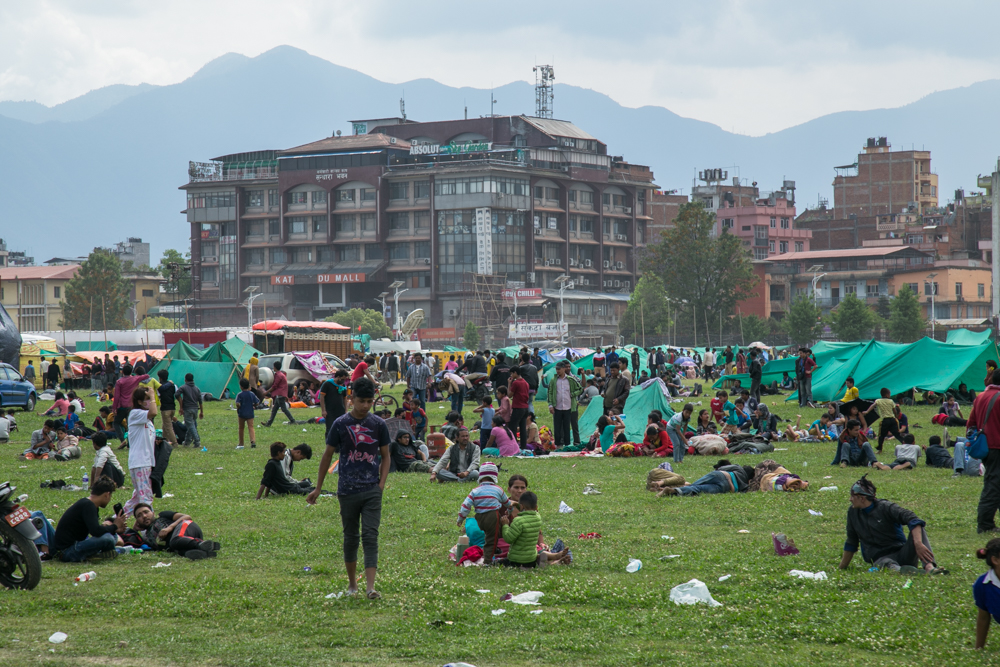 After a largely sleepless night on the same bed that shook me senseless the day earlier, I woke to sunshine coming in the window. For a brief moment I wondered: “Was the horror a nightmare?” But the vivid memories of people screaming, dead bodies piled in the street, and ancient temples reduced to piles of brick reminded me of the reality. I clicked on the tv, half expecting there to be no power. The generator was running so I was able to more fully understand the absolute devastation. Villages were completely leveled. Highways were cracked in half, buildings leaned on each other and people — alive, injured, and dead were being pulled from piles of brick. I was shaken hard to see the shattered remains of places I’d photographed days earlier or planned to visit the day the earthquake destroyed them.

My friends and I decided to find the Red Cross or some place to help. On the way to the hospital, the earth began shaking again. It was not just an aftershock. It was a 6.6 earthquake with a different epicenter than the first. We stopped until the shaking stopped, then set out walking past backhoes and bulldozers in the street. I noticed a couple of men wearing Nepal Red Cross vests and asked if they could take my friends and me to their headquarters at the police office.

It was near 1 pm when we arrived at the Metropolitan Police Office. A Red Cross representative asked how we could help. “We’ll do anything,” we said. “We want to help in any way. We’ll hand out water, deliver food, move bricks, whatever. Just tell us what we can do and get us there.” But the response seemed lukewarm.

“You can find a place where they are doing rescue and start helping,” the rep said. “Tell them you came here and we sent you.” We showed him a map on the phone and asked him to point out where some of these areas were. They were not close, an hour or more by walking streets we didn’t know.

“Come back tomorrow and maybe you can go,” he said.

“What about Durbar Square?” I said. “What about the camps? Can’t we just go there? Aren’t they in need of help there?”

“You could go there. The people in the camps have water. They have food. They are asking for tents because the rain is coming.”

I felt there was not much more we could accomplish talking with this man, so we left. My friends went to the French consulate to see about having a place to stay. After getting some food, I decided to make my way to Durbar Square. Along the way I walked into one of the large camps along Kanti Path, the main road leading to Durbar Square. Thousands of people were living on what looked like a fairground-turned-refugee camp. There was trash everywhere. A line of a hundred people holding empty bottles waited for access to a water truck. Exhausted people slept anywhere they could. Children played everywhere. Seeing those kids was the best thing I’d seen for two days. 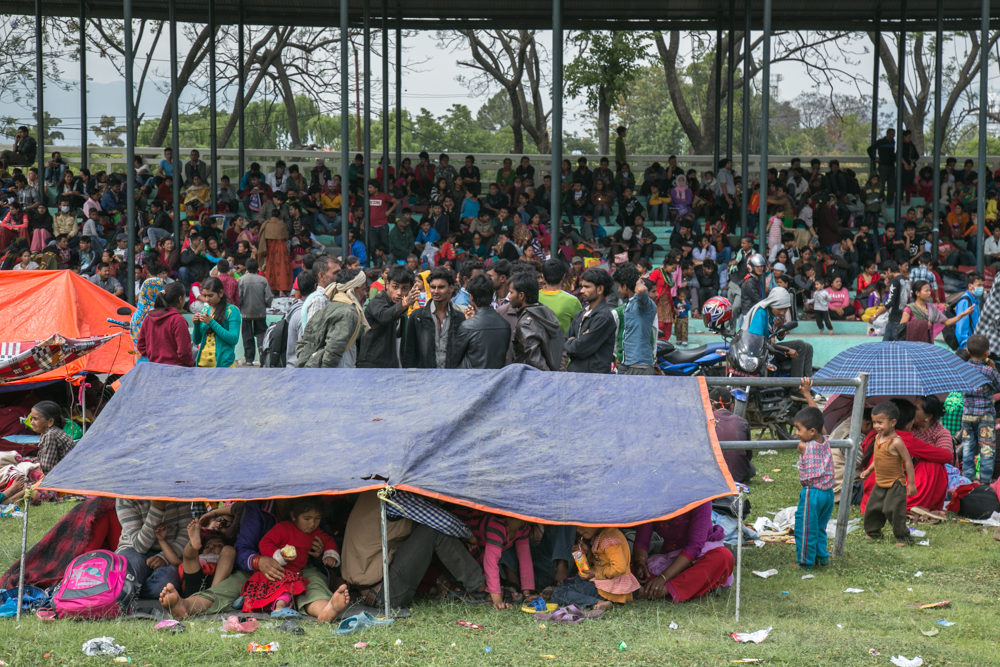 One family was building what looked like a hoop house from long thin strips of bamboo, but not succeeding. I stopped to help them but soon realized they were lacking the material to keep it standing. I have a background in construction and after assessing their material, made a mental note of what they needed: strong cross beams, rope, and something to dig into the earth. One of the refugees spoke English well enough for me to explain that the tent wouldn’t stand up to the rain and wind. I promised I would help, but needed to go find materials. 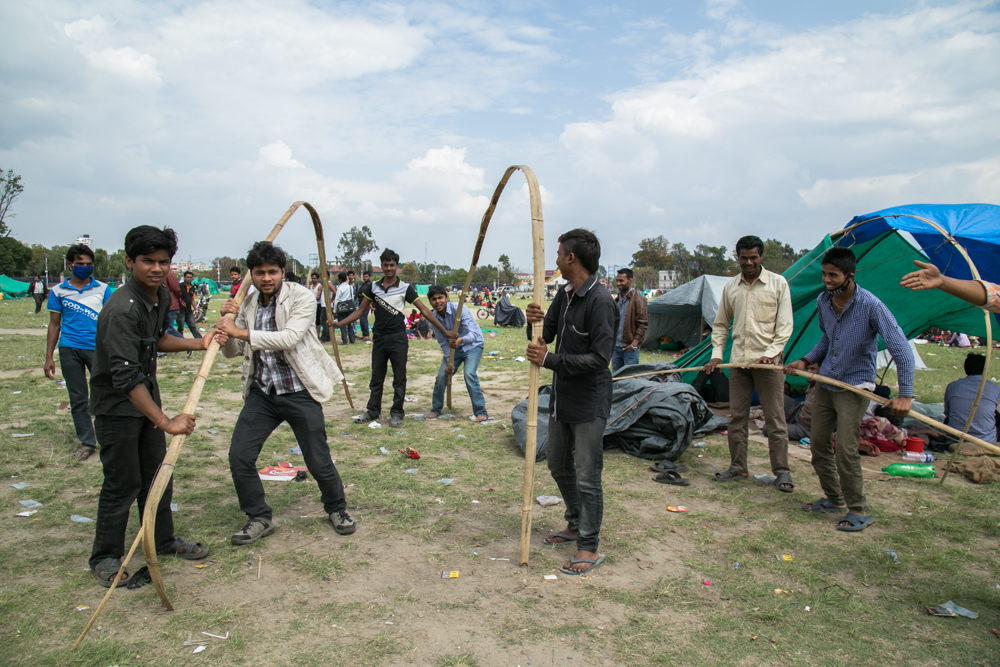 On the way I walked by the foundation and bottom of the Dharahara tower. Enormous sections of the tower and piles of bricks taller than I am littered the once-beautiful square. A motorcycle crushed like a tin can sat in front of a line of shops. Dozens of people stood on the bricks looking at the remains in disbelief. I knew there were bodies under those bricks and wondered if the German girl we ate with the night before the earthquake, who hadn’t been seen since, was visiting the tower when it fell. As I began to feel tears, I understood how numb I’d been.

I kept moving, looking for materials to build the tent. I remembered the wall at my hotel that had fallen. There were aluminum beams and other metal brackets in that rubble. I raced back there, picking up wires and anything that could be used to tie the beams together.

I tore the beams apart from the drywall, stacked it, and ran to my room to get anything of use. I grabbed all my food, a flashlight, and my multi-tool. I took the stack of aluminum and heaved it on to my shoulder and started walking back to the camp.

My arm ached from holding the metal on my shoulder, but I had a long way to go. Somehow I kept going. In the two hours that had passed while I gathered materials, the camp had changed. There were more tents and more people. Rain clouds were moving in.

I finally saw the family I promised I’d help. They were all sitting on the ground. As I walked toward them, one recognized me and said something to the group. They all stood up, looked at me with surprise and began cheering. When I reached them I tossed the metal from my shoulder and said “Okay, let’s build this.” In that moment I felt something unlike any other feeling I have ever had, stronger than any other feeling — the feeling of making a difference. It was so strong I had to keep myself from crying.

NarrativeDiary of the Nepal Earthquake: Part 1

I gave the food and flashlight to the women and children. The men grabbed the metal and we used body language and simple English to decide how to utilize what was there. A crowd of about 20 gathered over me as I used the multi-tool to rip the thin aluminum pieces apart. One guy helped me bend the bigger pieces in half. We handed them off to others who tied them together. Within 15 minutes we had a frame. I knew there were other refugees there needing the same materials and work, so I told the people to wait for an hour and I’d bring more. I headed back to the hotel.

At the hotel I heaved another load of aluminum, even bigger than the first, on my shoulder. I strapped two boards to my backpack, gathered rope-like material for tying and set off for the hump back to the camp.

Only an hour later back at the camp more tents had sprung up. The military were distributing orange tarps, but nothing to hold them up. Some of the refugee people looked at me like I didn’t belong, but more smiled at me than before. Kids walked beside me asking “Where from?” Soon there was a mob saying “Give me, give me” and grabbing at the metal. But I had promised the metal to others. I gave one beam to a desperate woman, another to a kid. I tried to find the people I told to wait, but they were not at the first tent anymore. So I distributed it to the kids evenly. It was gone in an instant.

I’ve always known that I like helping people, that I want that to be a part of my life, but I never knew quite how to do it. That day I used rubble to build a shelter that protected a family from cold rain that night. I learned that making a difference does not have to be complicated. It can happen by seeing someone in need and doing what you can with what’s available.

Tagged
Narrative Student Work Nepal
What did you think of this story?
Meh
Good
Awesome