IT’S LIKE THE LAST ride on the dodgems before the funfair closes for the night, except these are fuel tankers and buses instead of little electric go-karts with rubber bumpers. “Clusterfuck” is too weak a word for the chaos and carnage these roads have witnessed, and yet every day the roads fill with even more gamblers, their vision nearly obscured by the religious paraphernalia hanging from their windscreens attempting to bribe whichever almighty they’ve pinned their hopes on.

I passed my Ugandan driving course with flying colours after being a learner for six days. I could confidently drive a car in a straight line on an empty road, and even managed to park backwards into a box marked by sticks after a few attempts. My teacher had welded some metal bars onto the pedals to make a rudimentary form of dual control. 100yds from any junction I would feel his foot slowly treading on the brake. I assume he was operating from experience. 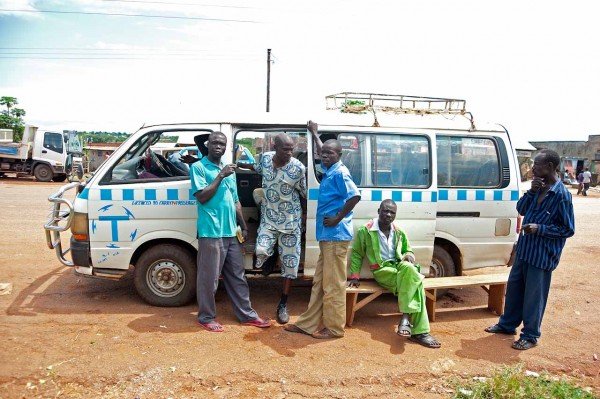 A matatu waits to be filled in Kigumba, surrounded by touts and possibly a passenger or two. For my birthday I want the outfit being modeled by the man in the doorway.

The matatus are public enemy #1. Small minibuses bearing the hollow legend “licensed to carry 14 passengers”, they exist in some incarnation in most developing countries. The Ugandan version is tame in its appearance compared to those of Kenya, where they sport alloys and plasma screens, but Ugandans make up for bark with bite. Driving full speed at all times, jockeying to overtake each other on blind bends and in heavy traffic, if the road is full they’ll just use the pavement.

Piloted by mercenaries bent on profit at any cost, the matatus appear as if by magic beside your rear bumper before howling past in a fragrant blue cloud of half-burned diesel. But if driving near them seems bad, just wait until you’re a passenger. 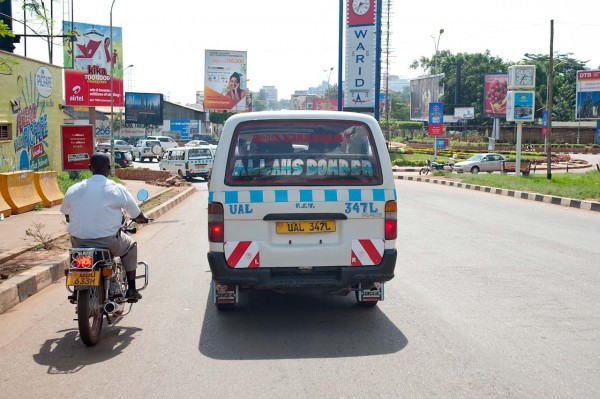 Before a matatu sets off on a journey, it first parks and waits for a full complement of passengers. This can be five minutes or two hours, but rest assured you’ll have to wait. There’s usually something loud on the radio, somebody listening to music on their mobile phone speaker, two or three conversations shouted over the hubbub and the callers outside shouting “KampalaKampaleeyyyoooo” in an attempt to persuade people to board.

There are often chickens on the floor with their legs tied and beaks open from dehydration as they quietly wait and defecate. The booming mukene trade—small dried fish—adds to the chicken-shit bouquet. A ride at the end of the day is heavy with the potent funk of everything the bus has carried on its travels, swirling through the noise, and if you’re lucky it will be swept out before tomorrow gets going at 5am. 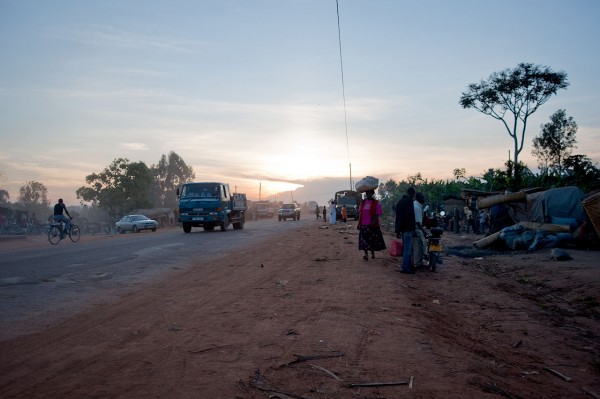 A typical roadside scene, this time on the Masaka-Mbarara road.

The roads themselves vary from awful to good, often on a single route. New stretches now feature real tarmac and deep, stone-lined drainage ditches. The older surfaced roads are covered with what a friend once referred to as a “spray-tan of asphalt” . The thin carapace cracks as soon as it’s exposed to rain or heavy loads, revealing the red mud beneath. These tiny pockmarks soon swell, helped by the passage of time and trucks, until there’s a gaping crater gnawing its way straight across the road.

Tarmac is used only on major routes and within urban areas. The rest of the country is connected by a network of single-lane tracks made of murram (hard-packed clay). At best, this is a good if slippery surface, and though the dust billows out behind the car it’s possible to drive quite fast on straight stretches. But God help you if you need to stop quickly: the surface offers no real traction, and most accidents on murram are caused by loss of control. Instead of braking sharply you should pump the brakes again and again whilst muttering the magic spell of “fuckfuckfuck” under your breath to bring the car to a safe halt. 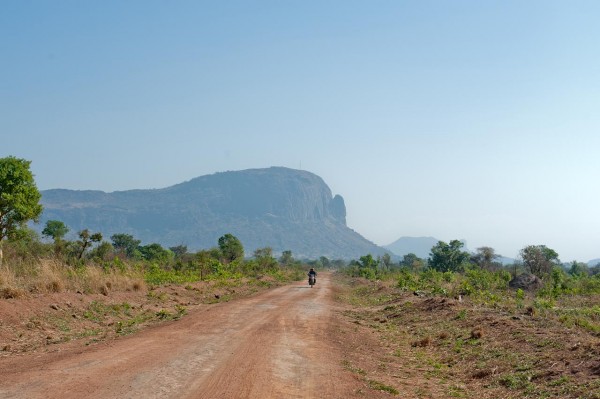 A motorcycle travels down a rural road in Central Eastern Uganda.

The problem with using mud to make roads in a country where it rains heavily for half of the year is that mud is soluble. When the rains come, the roads begin their slow decline. Trade routes where heavily-loaded container lorries pass soon become quagmires capable of swallowing an entire bus. One story I heard about the Atiak road (connecting Kampala to Juba) involved a single truck getting stuck and causing a jam that stretched for 20kms and lasted for a week. Even the quietest road develops bone-shaking corrugations during the rains, and the district local governments can only afford to send out machines to repair the damage once in a while.

The driving etiquette you learned back home must be painstakingly discarded and re-learned for Ugandan roads. Buses wait for no man, and I’ve been run off the road by trucks on several occasions. Instead of assuming equal rights on the road it’s better to expect the worst and be pleasantly surprised. When approaching a truck on murram it’s standard protocol to flash headlights and switch on the right indicator. This shows how wide your vehicle is, so that in the regular event of meeting a vehicle with only one headlight you don’t assume it’s a motorcycle. Then you steer off the road toward the shoulder and park up, waiting for the truck to pass. 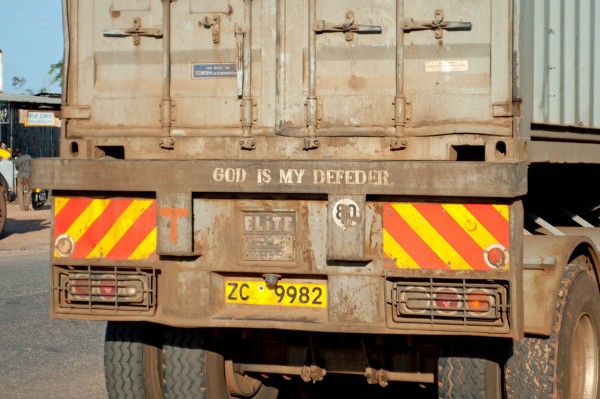 Never trust a Ugandan truck driver as your spellcheck.

One of the harder things to get used to is road position. Whereas I learned to stick to the left or right side, on Uganda’s single-lane roads you must just plonk yourself in the centre and then play chicken with oncoming cars. But the most important item on the list of Ugandan driving techniques is this: in a traffic jam, anything goes. Open up another lane of traffic in the middle of the road; drive into the surrounding town to find a back route; if all else fails, use your horn. Lots.

A driver I once worked with took me along the wrong side of the road until he met an oncoming car. Then he parked where he was, blocking the lane and calmly started to read a magazine. He claimed it was the other driver’s fault, reasoning that there was plenty of space for the other car to pass on the shoulder. 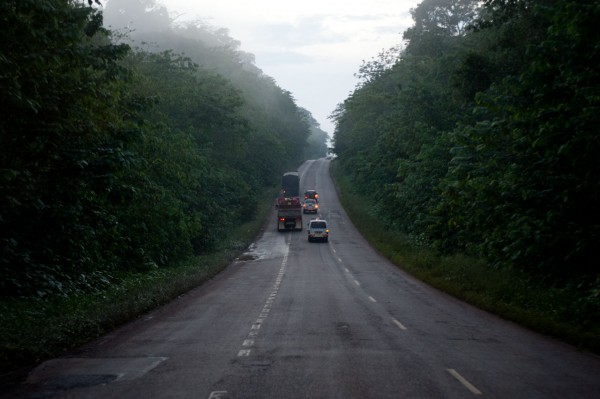 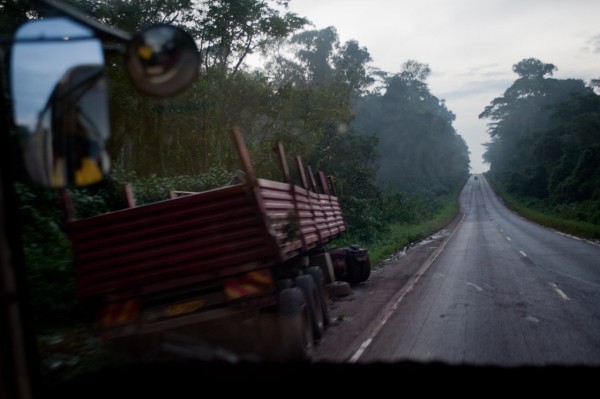 The wreckage of a truck in Mabira Forest. When you travel on the early morning matatus from Jinja to Kampala these sights become worryingly common.

If you’re ever in need of a safety reminder, just look out for a police post. Vehicles involved in accidents are dragged to the grass outside the nearest police station, where they sit as a sort of road safety billboard until the wreckage is disposed of in one way or another. In many cases, the owner has died in the accident and nobody was around to claim the wreckage, so it rusts away. Passing these boneyards can’t fail to send a shiver down your spine, a testament to the flexibility of metal at high speeds.

In the event of being involved in an accident, the law and the official advice contradict each other. The law states that you should remain at the scene of the accident until a police officer arrives. The official advice, however, is that in the event of killing or injuring somebody it’s in your best interests not to stop, but instead to proceed to the nearest police station. This might sound bleak and inhumane, but the high incidence of “mob justice” means it’s worth considering that at least a jail cell will keep you safe. 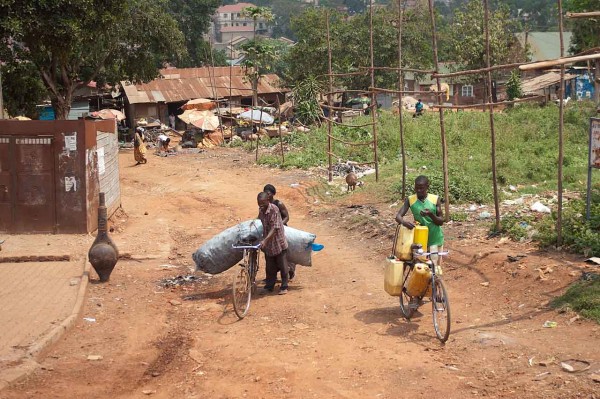 A boy carries charcoal on the back of a bicycle. This is by no means the largest object those bikes can take - I've seen chairs, livestock, and even sofas being hauled around. Try overtaking that!

In the event that you’re flagged down by police while minding your own business, go ahead and call to let everybody know you’re running late. Whether you’ve broken the law or not, it’s going to take a while. The policeman will swagger over from his perch in the shade, a big book of charge sheets and maybe a radar gun in his hands. He will circle the vehicle, checking everything, before presenting himself at your window and telling you that you have a light out/you were speeding/your vehicle looks unsafe.

Regardless of the truth, apologies must be made humbly and respectfully before the charges are read out. If what you stand accused of seems false you can try to argue, but the policeman is often looking for a bribe and will happily waste your time until he gets one. The Luganda phrase for a bribe is kitu kidogo (“something small”, understood universally here) but if you’re a tourist and you’ve actually broken the law it will be cheaper to pay the fine. On no account, however, should you hand the policeman your car keys or your driving license card. If this happens you will stay until you have paid, regardless of what you stand accused of. 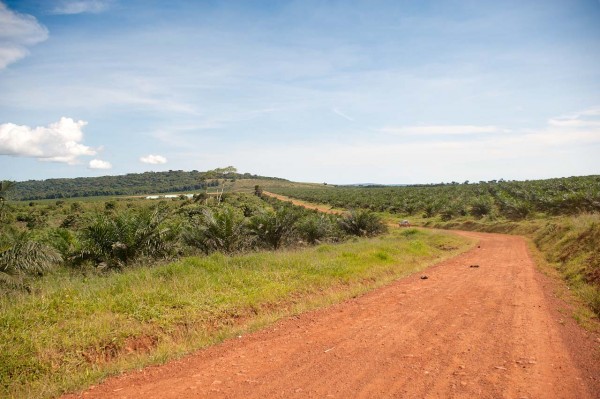 But amongst the chaos, I enjoy driving here. The roads are uncongested for the most part and the views make any journey a pleasure. There’s a lot to get used to, but one of the greatest assets of Ugandans is their cheery disposition. That, and their ability to travel in a chicken-shit-scented sardine tin without lynching its proprietor. 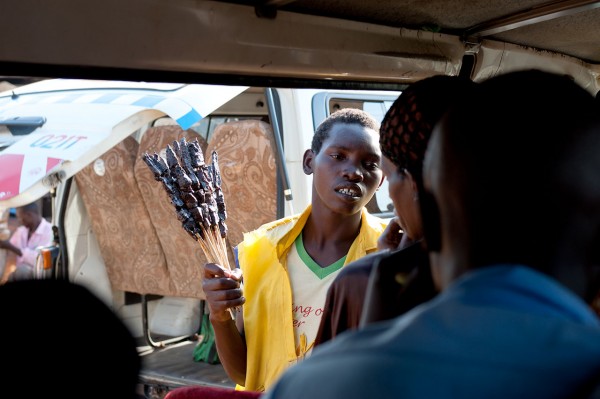 In need of a snack while travelling? Try the stick of cow's liver. I hear it's delicious.

Tagged
Insider Guides Uganda
What did you think of this story?
Meh
Good
Awesome