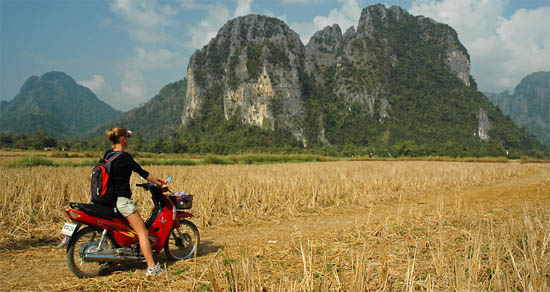 Motorbikes and freedom are synonymous. In films like Easy Rider and The Motorcycle Diaries, they’re not just two wheels taking the characters from point A to B, but vehicles propelling them on a journey of self-discovery.

Which is why they make such an attractive option for travelers. After all, independence, getting off the beaten track and self-discovery are much of why we’re traveling in the first place.

Motorbikes give you access to places that may not be on bus routes. They allow you to sidestep the chore of negotiating with tuk tuk drivers for every little trip.

For most travelers, renting is the easiest option. Depending on the country it could be as simple as showing your passport details and handing over a fistful of US dollars (Vietnam or Cambodia) or a more thorough process of proving you have both an international drivers license and, in the case of a proper motorbike, the relevant license from back home for the class of bike you’re renting.

In most cases renting a clutchless scooter will only require a regular car license. Check over the bike thoroughly and record, in writing, any damage already on the bike. 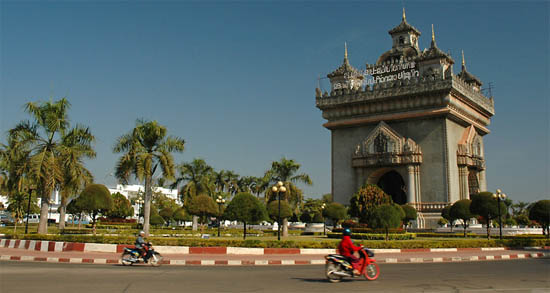 Never ridden a motorbike before? If you can ride a bicycle you can probably handle a scooter. These 50cc or 100cc machines are light, relatively low powered, stable and easy to learn on. Automatic models are the simplest as you only need twist the throttle and go.

If you’re learning, avoid the big cities and instead try the smaller towns in rural and coastal areas as there’ll be less traffic to worry about.

For first-timers interested in riding a traditional motorcycle, a pre-trip motorcycle safety course is a wise investment. In the US, the Motorcycle Safety Foundation offers intensive courses that take you from never having ridden a bike to mastering the maneuvers you need for passing the state license test, and beyond.

You’ll probably be familiar with the rules of most Western countries (apart from perhaps getting used to driving on the ‘wrong’ side of the road) but its the developing world that can be tricky.

In brief: small gives way to big. On the pecking order motorbikes are just above bicycles and pedestrians but below cars, trucks and buses.

Anticipation is also essential. In many places (yes I’m looking at you, Indonesia) you may have to give way to traffic pulling off on a side road. Don’t be afraid to use your horn.

Rather than an act of aggression, its seen as a friendly warning in Asia. It feels a bit weird at first, but it soon becomes reflexive. 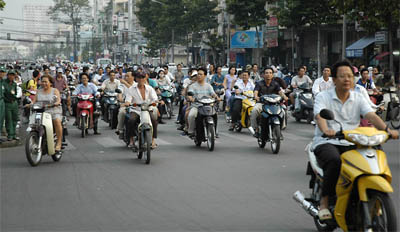 Just because you’re away from home it doesn’t mean the rules of physics, fate or just plain bad luck don’t apply. Riding a motorbike can be dangerous. But it’s also a lot of fun.

To ensure it’s the latter take it slow, anticipate the traffic and always wear a helmet. If you are going to be doing lots of highway riding then consider bringing your own helmet from home.

If you’re riding long distances in the tropics it may be too hot to wear full leathers, but consider wearing some sort of body armour.

Flat tires were the most common problem I encountered in four months of riding in Asia, but that was mostly my fault for going off road on a 100cc scooter. It was simple enough to get it fixed by a roadside mechanic.

Anything more serious enters a bit of a grey area. If you’ve rented the bike, you shouldn’t have to pay for major mechanical repairs, but if you get stuck in the middle of nowhere it may be better to pay a local mechanic to get you going again rather than leave the bike.

The best advice is to have the contact details of the bike owner handy and agree in advance what to do if the bike breaks down.

An extended motorbike tour is the ultimate if you really want to escape the crowds.

An extended motorbike tour is the ultimate if you really want to escape the crowds. Renting a bike is still the easiest solution for short to medium term tours and with a reputable hire shop you’ll benefit from their experience and recommended routes.

Weight is the biggest enemy of the touring motorcyclist but in many countries with an established bike culture, such as Italy or Thailand (or even Laos), both accommodation and repair shops are available on the main touring routes.

It’s only if you’re getting off the beaten track that you’ll need to pack a tent, spare tubes, tires, spare parts and more. And if you’re not confident enough to go it alone, there are plenty of options to take a guided tour or even ride pillion.

The Easy Rider motorbike guides in Vietnam’s central highlands are one of the best, taking travelers on multi-day trips north from Dalat along the Ho Chi Minh Trail.

Who said motorcycle touring has to be a hardcore, pan-American Highway deal? Short can be sometimes sweet and riding the length of Koh Lanta’s western coastline is certainly great fun.

The newly cemented road is wide and relatively free of traffic. From the port town of Saladan in the north the road takes you past the white sand beaches and then into swooping turns up and down the forested cliffs that cover the southern part of the island.

The only difficult part if deciding which beach bar to stop at for lunch and fruit smoothies. 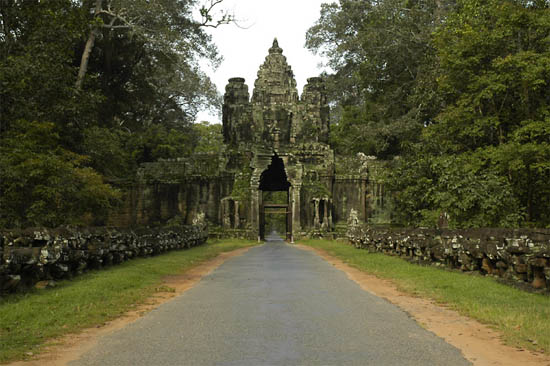 Hoi An to Hue, Vietnam

At just 120 kms its an easy day’s ride. Be sure to stop in at the Marble Mountains south of Da Nang (you can’t miss them) to check out the temple caves and the panoramic view of the area. Da Nang itself isn’t the most picturesque city so keep moving until you reach the beginning of the Hai Van Pass.

The recent construction of of the Hai Van Tunnel through the mountain means the mountain road is mostly free from trucks and buses, leaving you to enjoy the scenery and the sweeping turns on the downhill run into Lang Co.

While not essential, the bike will be handy for sightseeing in Hue as the city is quite spread out on both sides of the Perfume River.

Various members of the Matador community travel by motorcycle. Check out Salcar’s blog about a Che Guevara-inspired tour of Latin America combining motorcycle access to super remote areas with a broad investigation of healthcare (or lack thereof) available to local peoples.

One of the best resources for those interested in touring is the forum at advrider.

Finally please stay tuned to MatadorTrips.com for an upcoming offering of the best motorcycle tours through Asia.