The air was getting thin and my vision was blurred more than just by the smoke billowing out of the crater. I couldn’t find solid footing on the steep volcanic landscape, my knees buckled, and I placed a hand on the jagged rocks to regain my equilibrium. I could see the huts at the edge of the crater where we would spend the night, but we weren’t any closer than we were 20 minutes ago. The wind whipped over the mountain and nearly upset my balance again. It was freezing cold, but my clothes were covered in sweat from the first five hours of the hike over the tropical plateau of Goma in the Democratic Republic of the Congo. We were determined to summit Nyiragongo and peer into its crater and experience the cauldron of lava churning far below.

Even though the “African World War” officially ended in 2003, the eastern portion of the DRC has remained a battleground for various proxy armies and warlords, including a militia called M23, sowing chaos with the sponsorship of the Rwandan government. Ugandan and Rwandan troops make regular incursions into the Congo — followed quickly by official denials — to combat the cross-border raids of the militias that still terrorize the population on both sides. Virunga National Park, bordering Rwanda and Uganda, had been closed for nearly six months last year after poachers murdered a park ranger. In September, the park reopened and tourists were once again permitted to climb Nyiragongo.

I am a doctor, working in Rwanda to teach internal medicine to the generalist doctors in the rural hospitals where I live. After nearly a year, I began to notice the oppression of the Rwandan government, hidden underneath the surface for foreigners, and I needed to breathe freely again outside of its borders, thinking the Congo would provide that escape. However, two weeks before the trip, M23 restarted raping and pillaging the people of the DRC, nearly canceling the voyage and forcing us to follow the violence daily along with the weather updates. A brief window of peace opened, and the opportunity presented itself to experience Africa’s most-active volcano with a lava lake purported to be one of the more spectacular natural phenomena on the continent. We decided to chance it. 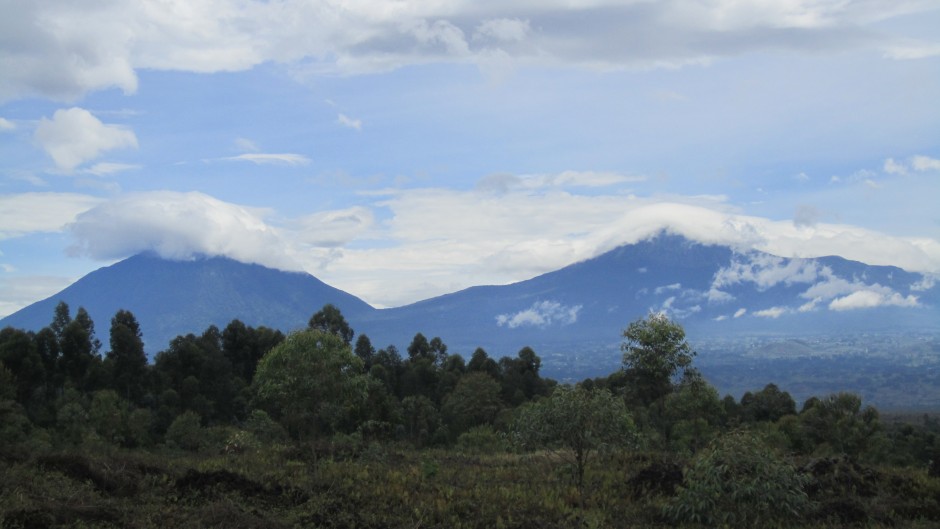 As soon as we crossed the border, the beauty of Rwanda faded into the distance. It’s more than just the rain that constantly pelts down — Goma, the border city of one million, is completely covered in black dirt. The volcano last erupted in 2002, destroying a third of the city, and leaving behind black volcanic rocks and dirt that give the region the distinctive shade. Unlike the perfectly ordered streets of Kigali, Goma is chaotic and disorganized. Immediately, life rings louder and more boisterously, the Congolese having a reputation for liveliness compared to their staid neighbors. As we drove past the sandbags and barbed wire of the UN bases, the carcasses of old passenger airplanes rotted on what used to be an airport runway. I asked about the reception of the UN troops nearly a decade after the end of the war.

“Everyone likes the South African troops the best,” Joseph, our guide, explained, “because they spend the most money and pay the most for prostitutes.”

We made our way into the countryside, littered with garbage and plastic bags snagged on the jagged rocks. Instead of the mud or clay huts with tin roofs of Rwanda, here houses are constructed of wooden planks, occasionally wrapped in plastic to protect against the elements. Volcanic rocks of all sizes are strewn about the towns, sometimes used to wall off a property, but more often than not lying exactly where Nyiragongo spewed them a decade ago.

The rain came down steadily as we pulled into the national park base camp at 6,000 feet and commenced the hike. Sixteen tourists and ten Congolese departed together: two park rangers armed with rusted AK-47s, seven porters to help the out-of-shape tourists carry supplies, and the guide Joseph. One group of spoiled Americans brought a large cooler filled with juice, fruit, and vodka that the porter could only carry on his head. Wearing sandals and balancing the cooler on a towel coiled on top of his head, he still ascended more rapidly than most of the tourists.

The terrain changes in stages throughout the ascent, each clime varied and spectacular in its own right. Thick jungle filled with massive ant colonies, hollowed out trees that house reptiles and rodents. Arid grasslands dotted with spiny trees whose roots cling to the steeper inclines at higher altitude. Red volcanic rocks covered in moss rolled and slipped under each step of the walking caravan. We ascended into yet another jungle that inhabited the muddy terrain between two peaks, exponentially worse when the rain, which paused briefly, started again. As the air continued to thin, we had to break every half hour or so for the group to catch their breath, and the water that the porters carried lightened with each stop. 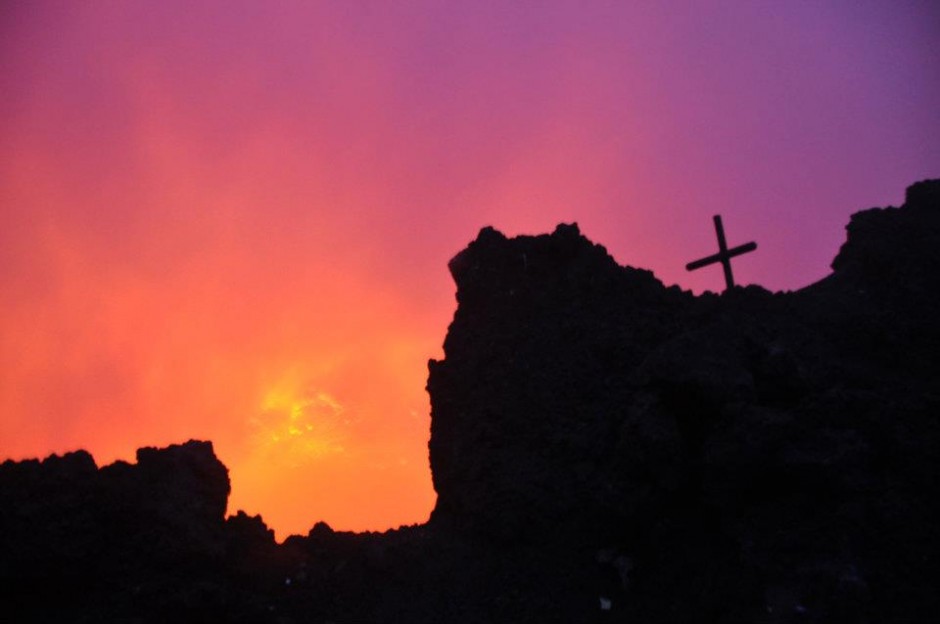 Finally we reached tree line, nothing but small shrubs and scrub grass clinging to the side of the volcano. Above 12,000 feet, all vegetation disappears entirely and there is only craggy, black mountainside. After a day of trekking at an upward angle, my brain no longer remembered what flat ground felt like and lost perception of the grade of the incline. With the pack weighing me down from behind, the safest route was to lean into the mountain, occasionally placing a hand down for balance — until it became absolutely necessary to climb hand over fist. The temperature noticeably dropped every few hundred meters, and the wind beat against my face whenever I poked my head over the ridge we were paralleling.

Six hours, eight miles of trails, and 5,000 vertical feet later, we touched the summit. The smoke reeked of sulfur, making it even harder to breath in what little oxygen there was at this altitude. I couldn’t catch my breath and felt nauseated; I placed the heavy pack on the ground and then realized my body was shivering from the cold. I ducked into a shelter and changed into dry clothes and layered up for the coming night.

No signs of any life revealed themselves in this inhospitable environment, not even birds or insects. Darkness approached the summit much earlier than usual, the light obscured by the clouds and billowing smoke. At any moment, the volcano could erupt and erase any evidence that I ever existed, and the threat of immediate mortality clung to my skin for the rest of the night. Lava above and murderous militias below — Mordor has nothing on Nyiragongo. 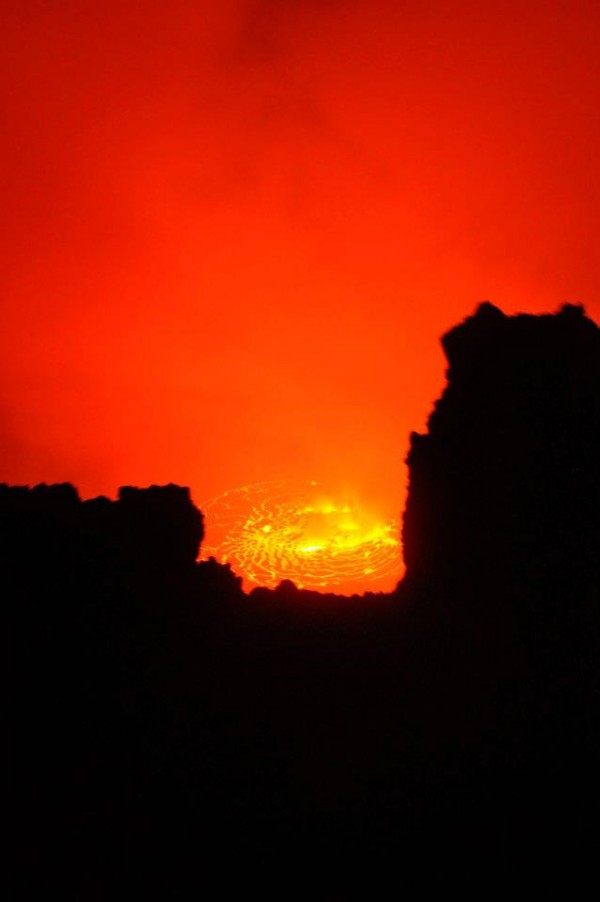 My thighs aching, I walked up to the edge of the crater and peeked over, only to feel the world spin around me — not a good place to have vertigo. Burning embers smoked some 3,000 feet below, and a cross embedded in the peak marked the spot where a Chinese tourist intentionally leapt to her final resting place. The smoke obscured the liquid magma, so we perched on the edge of the crater and waited an hour for a clearer view. Disappointed and cold, we descended the 20 feet to the shelters to choke down protein bars and canned tuna for dinner.

After dark, we took another jaunt to the edge of the crater to experience the volcano. The smoke glowed orange from the magma, and small eruptions poking through were visible from our post, but the world’s largest lava lake refused to present itself. We posed for a few photos and headed back down. Wind whipped around the shelter; smoke billowed by the window. Wind blew up through the hole in the ground of the latrine, making it impossible to use the facilities without bearing some liquid evidence of your time there.

At ten o’clock, we decided to make one final attempt to view the lava lake. We scrambled to the top and the smoke cleared — Nyiragongo opened itself to us completely. Dark red slabs of magma skated on a pool of fiery orange lava, coalescing around a stripe of flames, the pounding heart of the activity. Floating sheets of rock were entirely consumed along the fiery line and produced again at the edges of the pool. Lava exploded in massive columns of fire a hundred feet tall and visible from 3,000 feet above, radiating heat to the crater edge. I am an afterthought, a tiny speck in space and time.

Humbly walking back to the shelter, the vitality of Goma flickered via the thousands of lights that ringed Lake Kivu in the distance. The stars sparkled overhead, competing with the volcano for primacy. I lay awake tucked in the sleeping bag, snuggling for warmth with my partner, listening to the sounds of the edge of existence. My breathing never slowed at this altitude, and I turned in the cot, searching for more oxygen throughout the night, breathing in only sulfur. The brain never ceases to enumerate the effects of altitude on the human body or the countless ways to die at that moment.

Morning brought with it the descent, and in turn, release. Freedom from the omnipresence of death, running from a rebirth by fire and down toward the vibrant chaos of Goma, hoping to avoid an encounter with M23 or their Rwandan patrons on our way home.

Tagged
Hiking Narrative Democratic Republic of the Congo Ambassadors
What did you think of this story?
Meh
Good
Awesome
✖
travelstoke
Download the mobile app
stoked by