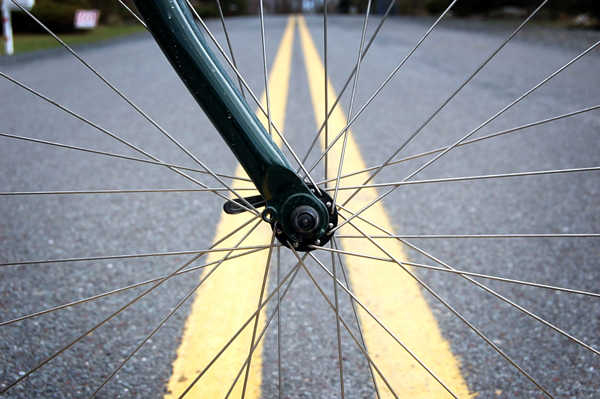 Adventurers have circled the Earth on all manner of bicycles. Joff Summerfield is currently on this third attempt to tour the world by penny farthing. Matador’s own Tim Patterson prefers to pedal a folding bike with 20-inch wheels, rucksack strapped to the back.

While acknowledging that the possibilities are endless, what follows is a summary of conventional wisdom for selecting a touring bicycle:

Most bikes can be very roughly divided into two groups: mountain and road. Mountain bikes are built for all-terrain riding, road bikes for just that—the road.

Tourers in areas lacking paved roads prefer mountain bikes. In addition to their overall ruggedness, most mountain bikes have front-suspension forks to eat up the shock of bumpy terrain.

Road bikes are designed to be speedy and agile. They only fit skinny tires and are not constructed to bear the weight of a touring load. In addition, stock gears on road bikes are too high for many tourers.

For those seriously interested in cycle touring, it’s worth looking into some dedicated touring models. These combine features of both mountain and road bikes, along with others specially created for the task of touring.

Like mountain bikes, touring-specific models fit larger tires and fenders, sit riders more upright, and are built to withstand the rough and tumble. Like road bikes, they often come with drop handlebars to increase hand-position options and have no front suspension.

Unfortunately, these bikes are much harder to find than their more popular cousins, especially in the U.S., where touring has yet to take off. Trek’s 520 and Cannondale’s T1/T2 are the two best-known touring-specific models in the Western Hemisphere. 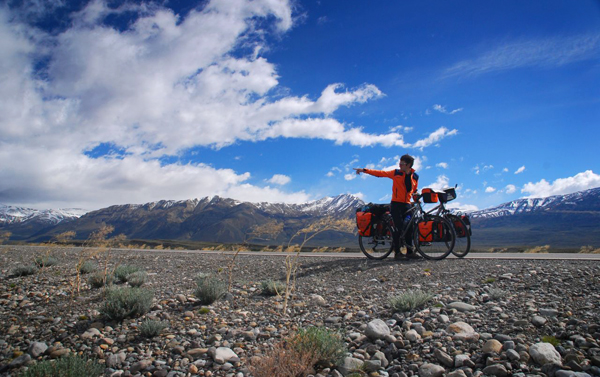 For touring, your two options will be steel or aluminum. Titanium may occasionally crop up—most frequently in tandems and recumbents—but use of this ultra-durable, light-weight metal will spike the cost.

High-end road bikes feature carbon-fiber frames to lessen their weight. This material is unsuitable for touring, as it’s weaker than metal and could crumple under the heft of rack and panniers.

The steel vs. aluminum debate is a heated one among tourers. While steel is heavier and susceptible to rust, popular opinion says it makes for a smoother ride. Sheldon Brown does a good job of debunking this assertion, but according to a poll on crazyguyonabike.com, 79% of tourers prefer steel frames.

When it comes to comfort, a frame’s geometry is probably more important than its material. Geometry refers to the ratios between the different tube lengths that make up the frame.

Touring-specific frames have a longer wheelbase; the linear distance between the two wheels is greater than that of traditional bikes. Longer chainstays and a raked fork make this possible, with the results being greater stability and comfort. 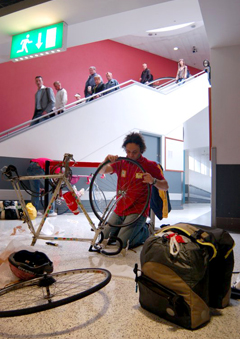 Another thing to look for in a frame is wheel clearance. You want enough room for at least a 32mm tire (probably a 35 or bigger), plus a fender.

As with any bike, it’s important to get a frame that fits you correctly. Browse the endless theories on the issue here, or simply ask a professional.

A touring bike has to perform—handle well under load, support rear and front racks and panniers, and possess a drivetrain you can rely on day after day.

You know a bicycle was designed with touring in mind if it has eyelets (threaded holes) on the rear dropouts, seat stays, and fork. These represent the easiest way to mount rear and front racks onto the bike. The installation of most fenders also requires special eyelets in the frame.

If your dream bike is missing the eyelets, don’t despair. Mountain bikes with front suspension, for example, aren’t going to have eyelets in the fork. There are ways to get around this, such as clamp-on racks or those that run a support skewer through the wheel axle. Alternatively, you could pull a trailer instead of mounting panniers.

Another nice touch to look for is an extra pair of eyelets on the down tube for a third water bottle cage.

The weight of your entire touring setup is going to rest on your bicycle’s two wheels. They must be able to shoulder the load.

Again, you’ll likely be presented with two choices: 26-inch wheels (the standard for mountain bikes and most bicycles around the world) or the slightly larger 700c (common on road bikes). The former are by physical definition stronger, and tires for them will be in stock worldwide.

More important for strength, however, are the quality of rim construction and the number of spokes. Dedicated-touring models should feature at least 36 spokes per wheel, four more than an average bicycle. 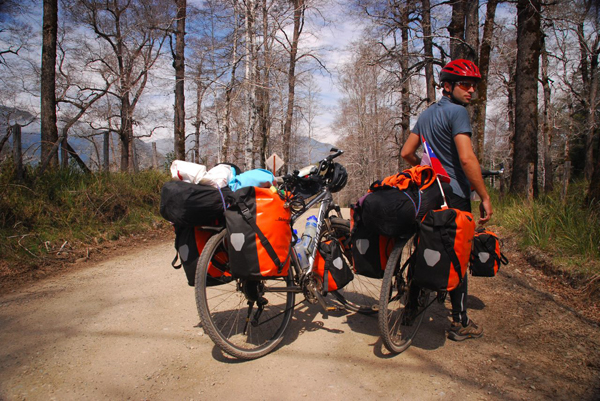 Generally, tourers like a gear ratio closer to that of a mountain bike than a road bike. In other words, they want a fuller range of slow-speed options when grinding up a steep incline.

Unfortunately, many touring-specific models come stocked with road-bike cranksets. If yours does, and you want to swap it out, do so before the purchase. Bike shops will often exchange components for free to close a sale; after the deal is done, you’ll have to buy any new parts yourself.

Touring necessitates strong brakes that can effectively slow the heavy weight of a loaded bike. Cantilever brakes, such as those on most mountain bikes, are your best bet, the V-brake system being most common.

Overall, a good rule of thumb is to keep it simple. Opt for the tried and true component over the flashy trial model. Complex shifting, suspension, and braking systems will be more difficult to repair on the fly.

On the road, reliability is priceless. 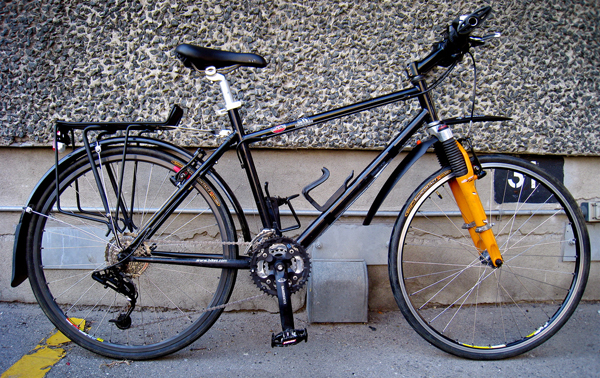 Racks, panniers, front and rear fenders, cantilever brakes, strong tires, plenty of gears, and even a front suspension are a few of the essentials that can make a bike a dedicated touring machine. Photo by vikapproved

Whoever builds your bike, you want their reputation to be solid. But even here you have options.

Brand name: Bikes sold by the big boys come with a proven track record and, hopefully, a lower price tag. In addition to Trek and Cannondale, Fuji and REI make popular touring models.

But because bigger corporations cater to the center of a large demographic, your precise needs as a tourer might not be fully addressed. Remember to factor any costs for new accessories into the price of the bike.

Custom builder: Nothing could be sweeter than sporting your very own custom-built touring machine. Have the frame constructed to fit your body, then add components as you like. You’ll pay more, but you’ll get more.

Waterford, Rivendell, and Bruce Gordon are a few well-known names in custom building.

Saddles, tires, racks…these are important elements of your touring rig as well. However, most manufacturers assume you’re going to change them out to suit personal preference, so stock accessories are often of lesser quality than the bike. It’s easy to mix and match once you’ve found the ride that’s right for you.

For an in-depth purchasing guide to the makers and manufacturers of various bikes and components, check out Bicycle Touring: a Solid Setup.

And for a little inspiration, check out Matador contributing editor Tim Patterson’s blogs about his own bicycle touring adventures: give Crossing the Chic Choc Mountains or The Blue Side of Lonely a read.

Also be sure to check out Hal’s 8 Steps for Successful Self-Supported Bicycle Tours.

Tagged
Lifestyle Cycling
What did you think of this story?
Meh
Good
Awesome

10 of the most notorious sex clubs around the world Traveling while fat: How I’m changing the narrative All of the food you can’t take through airport security The TSA has a new rule for snacks in carry-ons. Here’s why. The winners of the International Photography Awards revealed, and they’re stunning

Bicycles are in short supply right now. Here’s where to find one.