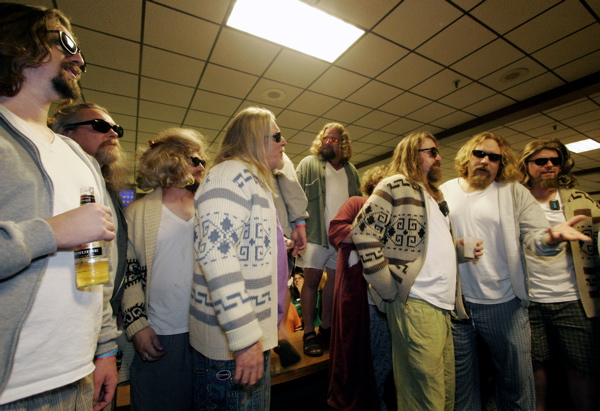 The Lebowski Fest abides. And just barely in time for the next edition, in a city near you, one semi-achiever remembers (some of) a fest past…

At some point I’d decided I should go to the Lebowski Fest. Actually go and see what it was like, rather than just imagine it and then later look at pictures online and wish I’d gone—and then pretty soon forget about it entirely.

I was in those days balancing my time between writing, thinking about writing, thinking about other things, and trying to kill squirrels with a pellet gun. My wife had suggested on several occasions that maybe I ought to get a job. A real job. Like where you commute back and forth to an office and get a paycheck every two weeks and eventually work your way up to parking and benefits.

Of course I’m happy, I said. Why don’t I seem happy?

You don’t even bother to get out of your bathrobe anymore.

Which on some level I resented. Yes it was a bathrobe, but I had shorts on underneath and a clean T-shirt. I was not barefoot. I was wearing flip-flops, and on my eyes, against the glare of the sidelong winter sun, a pair of fine, expensive, protective eyeglasses. It was cold enough in the house, and cold enough outside too, that I wanted to wear a bathrobe. It was more pleasant that way.

The most I was going to do, as far as going out was concerned, was maybe to mow the lawn out front or do some cleanup in the back. I wasn’t planning on going beyond our property line. I wasn’t, for example, planning on driving to Von’s for a quart of half-and-half. Not in my bathrobe, anyway. I wasn’t, after all, Jeff Lebowski.

It’s a housecoat, I said. Not a bathrobe.

Sometimes, on Wednesday nights, before trash day, out on the sidewalk, I’d meet up with my neighbor. He was a half-Armenian, half-Georgian, ex-Soviet Air Force pilot who flew hundreds of passenger-jet sorties into Kabul during that particular Afghan war, in the eighties — bringing fresh troops in and taking dead bodies out.

These days he was working six days a week, two shifts a day, around the clock. By night he was a uniformed security guard at a hospital downtown, by day a plainclothes detective at a jewelry store in Beverly Hills. Twenty-five dollars an hour plus benefits. 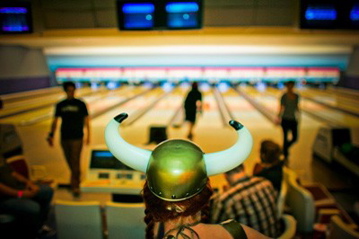 So where’s The Dude?

I work like donkey, he’d say, grinning, as we wrestled our respective bins, me in my housecoat, he with his badge and gun.

And then he’d say: Any news regarding your job?

What job, I’d think to myself, what’s he talking about?

I was interested in the idea of a community of fans, a community founded upon the otherwise solitary experience of watching a movie—which is of course not an uncommon phenomenon, especially in America. But this was not Star Trek or Harry Potter or Remington Steele.

This was The Big Lebowski, the Coen Brothers’ irreverent update of the Raymond Chandler/Philip Marlowe/mistaken identity tradition, in which Jeff Bridges plays “The Dude,” aka Jeffrey Lebowski—a hapless and amiable bum of the sort one sees often enough around Los Angeles, wandering the aisles of the local grocery franchise in bathrobe and sandals.

The character’s most obvious appeal, it seemed to me, was the way in which he, like Marlowe before him, redefined cool—Jesus-cool, postmodern-style—cool as the ultimate lack of aspiration.

The Dude was quite possibly, as the movie’s narrator puts it, the laziest man in Los Angeles County, “which put him high in the running for laziest worldwide.” That is, until someone peed on his rug and a certain amount of action had to be taken. And a lazy man forced into action is a surprisingly interesting thing to watch.

I wasn’t convinced that as a movie it was as good as, say, Raising Arizona, which had always ranked in my top ten, or even Altman’s The Long Goodbye, from which the Brothers Coen had here drawn inspiration. But I felt I understood the sense of humor behind the thing. So I figured why not check out the nature of the community it had spawned. See if it had anything to do with me. Or the state of the Union.

The audio files were deleted long ago, alas. But here is some of what I’ve been able to glean from the notebook:

Live from the Westbound Pedestrian Detour in front of the Kodak Theater, two nights before the Oscars. Hollywood is closed from Highland. Gangs of production people adorned with all-access passes, bomb-sniffing dogs, clusters of photographers and newsmen trying to sort out how to approach Sunday Night.

I am standing on a spot that will soon feature prominently on TV.

Next door, at the pre-party for Lebowski Fest West, inside some kind of night club, not much going on: only a few people drinking White Russians; nobody, as far as I can tell, smoking pot. I see a few guys trying to be The Dude. But the thing you realize is it’s nothing to do with the costume.

The original Dude, the inspiration for the character, is supposed to be here tonight. I don’t see him yet.

Once I get it in my head that in fact I may be The Dude, everything starts to pick up.

Chris and Danna have been married three times and divorced three times. To and from each other, it seems. Chris is wearing a trenchcoat, calf-length Indian moccasins and black sunglasses. He is not the original Dude, he says. “It’s just that they made a movie about a guy who’s life mirrors mine in a way that’s crazy.”

I order another White Russian. The bartender explains to me how in this life the best thing to be good at is being poor. Which I am highly practiced at, but not at all good at.

There is some kind of raffle, involving the original Ralph’s checkout girl, who is there with her twin sister. You can tell which is which because one is dressed in a Ralph’s uniform.

They show the movie on a big screen over the dance floor. It’s better than I remember. Then I wake up in the back of my truck in the parking garage.

There are nihilists. There are Sam Elliot look-alikes with pristine white hats and real handlebar mustaches. There are any number of Maudes in red wigs and bathrobes. Most are considerably fleshier than the wispy Julianne Moore version.

“It’s just that they made a movie about a guy who’s life mirrors mine in a way that’s crazy.”

There are three Jesuses, and three bars serving White Russians. There are lines to get drinks. Everyone waits with utmost patience.

There is a reporter covering the event for a Japanese magazine, and a crew from Spanish TV.

One woman has come as the ransom note, another as the coffee can that held Larry’s ashes. There is to be a costume contest. There are several Walters. One is pretty convincing. Another has come as Walter’s dirty underwear.

There is a bowling team called The Bums. They wear their gloves on their heads. They lose. I am disappointed this is not the actual bowling alley from the movie.

There are some admittedly dudely fellows in long cardigan sweaters and real beards. The Original Dude, the inspiration, is named Jeff Dowd. Jeff “The Dude” Dowd. He has no beard. He gets up to make a speech, starts out complaining about how hard it has been to get a drink. Then the mic cuts out on him. 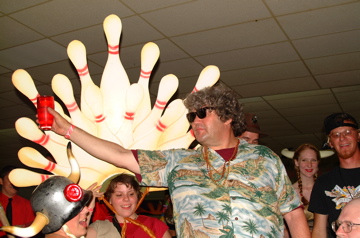 Melinda and Ed are up from San Diego. Some people get it, they say. Some people don’t. They saw the movie together when it first came out, in San Francisco. They bought the VHS, wore it out, now they have it on DVD. Melissa is worried about her car out in the parking lot—in the hood, as she puts it.

I leave the bowling alley and go next door for some soul food. I try the chitterlings, which I’m told are pig’s intestines (“you have to eat them with hot sauce”), then opt for a pork chop and some mac and cheese.

Back in the action, I spot the original Liam. And Chuck E. Cheese, who is in fact, I learn, a marmot. One of the Jesuses walks out into the lanes to retrieve his ball. One of the Maudes bowls a strike. The Original Dude bowls a spare.

Says one onlooker: “This is the most surreal thing I’ve ever seen in my life.”

A Jackie Treehorn recommends I see the Albert Brooks movie Lost in America. He confides that Lebowski Fest Vegas is better than Lebowski Fest LA. Someone else argues for Austin.

Outside the bowling alley, the night winds down ever so slowly with an original Jeff Dowd look-alike (who is not Jeff Bridges) doing an acoustic-guitar workup of Journey’s Don’t Stop Believing: hold on to that fee-layee-ya’ang…

Also check out Eva Holland on The Meaning of ‘The Big Lebowski,” all these years later. And this Matador photo essay from Louisville, where it all got started.

For more wild and wacky festivals across the globe, check out Matador Nights.

Got your own Lebowski Fest dispatches? Share them below…