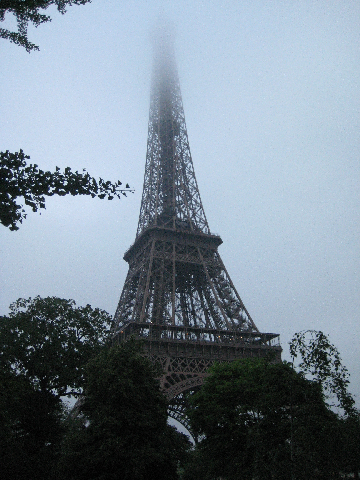 Joel Runyon wakes up freezing one morning in front of the Eiffel Tower. Here’s what happened.

IT HAD TO BE 30 degrees. Fog everywhere. A runner passed by on the sidewalk next to me. Lying there wearing all the clothes I had with me; a couple t-shirts, a waffle neck, a button-down collared shirt, and a hoodie, I looked ridiculous.

I was freezing. I was full out shaking. Trying to get my composure as I stood and I looked up, there it was: The Eiffel Tower.

I don’t think it had hit me yet. I was in Paris. Sleeping. Outside. In front of the Eiffel Tower. Who does that?

We were studying Spanish in Salamanca, Spain and had a free weekend. My buddy Landon had found 60€ tickets to Paris and convinced me to go for the weekend. Why not?

At this point in my 21 years of life experience, I had traveled a bit, but there had always been a specific reason (build a house, take Spanish classes, go the beach). I had never just traveled for the sake of traveling. There was always a plan, a purpose, a mission. Something about that morning changed that.

Too cheap for a hotel or even a hostel, we slept in the park in front of the Eiffel Tower. We didn’t have a cell phone, a guide book, or a map and neither of us knew anything in French beyond “bonjour.”

There was always a plan, a purpose, a mission. Something about that morning changed that.

We’d wake up early, try to warm up by walk the Seine until a shop opened up where we could sit down and warm up with a cup of coffee. We spent the next few days simply walking around the city. Taking it all in. There was no schedule. No obligations. No worries.

We ate when we were hungry. We slept when we were tired. We’d go visit the Louvre if we were bored. We saw the sights and sounds of Paris in a unique way. In our way.

There was this new world. It was open. It was vague. It was liberating.

As we packed up our things that morning and placed them in our backpacks, I knew something would never be the same. As the fog began to disperse and the sun came out, I knew there was more. I knew this was just the beginning.

This piece is the latest in our new series Losing Your Travel Virginity. Please see our original submissions call at Matador if you’re interested in submitting your story.

For those wanting to follow in Joel’s footsteps, here’s a guide on How to Move to Paris with No Money.

Tagged
Narrative Paris, France
What did you think of this story?
Meh
Good
Awesome