One of the amazing things about South America is that places like Humamarca and Buenos Aires exist in the same country. If you are traveling in Argentina and want to explore indigenous culture, grab your backpack and get on a bus for Salta and Jujuy, two provinces in Northwest Argentina.

1. Salta Capital a medium-sized city with few tourist attractions, but great cuisine. You’ll already notice how different small-town Argentina is to places like Buenos Aires. Eat a hearty dish of locro while you are here; it’s a stew made of fresh corn. Try its variation guachalocro with goat cheese sprinkled on top for a delicious belly-warmer.

Things to see and do in Salta include viewing architecture, walking, museums, presentations of folkloric music and dance, and eating. The main plaza, Plaza 9 de Julio, is Salta’s prime attraction, with its well-preserved Italian Neoclassical church dating from 1882, plenty of benches and trees to relax, and touristy cafes serving somewhat overpriced food and drinks. A fifteen-minute walk away from the plaza is the Cerro San Bernardo, a hill that you can rise up by taking a teleferico or by a thirty-minute hike up stairs.

2. San Salvador de Jujuy. Known as the most Andean city in Argentina because of the large Bolivia population. Here’s a little secret: the best food in town can be found at the Bolivian market around the corner from the bus terminal. Don’t eat too much of it right away or you’ll get a stomach-ache!

3. Quebrada del Toro Small villages set in valleys between along the Andean Cordilera. You can spend up to two days in each of these towns: Pumamarca, Tilcara, and Humamarca. Each has archaeological ruins, beautiful cemeteries, hills to climb to watch the sunset, delicious local cuisine (try the llama steaks!), and musicians performing in the streets. If you want to really tap into the unique culture of Northwest Argentina, step off the beaten path and head to Iruya. 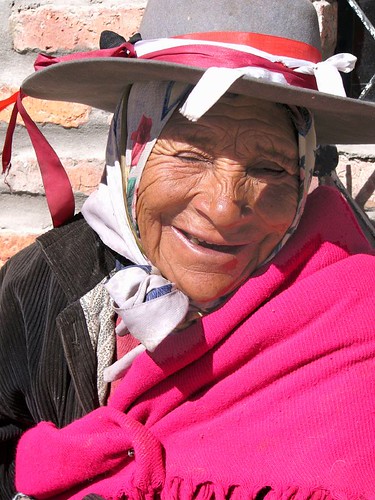 Campesina in Northern Argentina. Photo by Any Manetta

4. Iruya Like a tangent off the main route, a remote speck that just calls to you to break away from the beaten path and come visit it. Board a huge bus resembling a tank in Humahuaca, one of the last towns in Argentina before the border with Bolivia, and brace yourself for a three-hour seat-gripping descent into a mountainous valley where lies the town of Iruya.

The ride seems to descend into the mouth of the Earth. Upon arrival you will be greeted by small, bubble-eyed girls who take your hands and lead you to lodging. As you climb over cobblestone paths you’ll notice the serenity of this tiny hamlet. The lodgings are humble except for one high-priced hotel, but just sitting out on the stoop and drinking mate and enjoying the view is enough to make you feel like you are in a palace of natural beauty.

The people of Iruya are proud of their indigenous identities and they are shy to mix with visitors from urban Argentina or elsewhere. Despite this hesitancy, they are incredibly friendly and patient with tourists who ask nosy questions about their local customs. Although the people of Iruya wear factory-made clothes and watch television, they live in the middle of the mountains and raise sheep, goats, and pigs. With their hands they spin wool throughout the day to make carpets or clothing. If it weren’t for the presence of the three staples of every Latin American town – a soccer field, a main plaza, and a church – you wouldn’t even know you were in Argentina, or any country with Spanish heritage. The unique culture and lifestyle of Iruya, as in any remote village, is a result of hundreds or even thousands of years of interactions with the land.

5. San Isidrio. Whereas in Iruya there were televisions, cars, and tourists wandering about, a twelve-kilometer hike down the river takes you to a tiny hamlet where there are no vehicles, nothing resembling an actual bar or cafe with a TV. There are people washing clothes in the river or sitting in adobe houses knitting wools, or boys walking in groups with a soccer ball. It was surreal to be so remote from anything resembling a city, and it makes you daydream about Spanish explorers following the valley and river until they reached this settlement, and the kinds of cultural interactions that must have produced.

Argentinacontact.com has more options for visiting small-towns in Northern Argentina.

bus companies and schedule for Argentina

About Rachel Signer: “”I’m a freelance anthropologist, roaming the world doing what I have to do to accomplish my dreams, loving it all, and recognizing the beautiful parts as well as the not-so-pretty things.”

Tagged
Trip Planning Argentina
What did you think of this story?
Meh
Good
Awesome