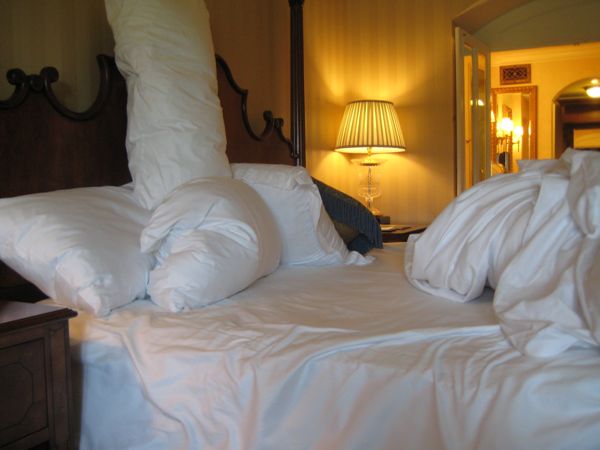 The author’s lesson on how to frolic in nice sheets. All photos by Tom Gates.
Semi-fresh from a year of backpacking through hostels with mystery-stained sheets, Tom Gates spends two nights in a top-rated hotel and loves every second of it.

I am in my room, squealing like a two year-old who’s been given a Mickey Mouse ice cream, the kind with chocolate ears.

I am rolling in the layers of bedding, reveling in the concept of sheets with a thread count higher than my IQ. I now understand why dogs do that nose–to-the-grass thing in the fields of big parks. Before it seemed so queer.

I open and shut drawers and doors of thick, beautiful wood furniture. I turn on anything electrical, from the bathtub television to the iPod speaker set that, yes, can be brought right into the crapper. I thumb every piece of linen (then Google their Italian makers’ name).

The Grand Del Mar has given me this room for two nights in order to write about it. It is my first writer ‘spiff’ ever and I pondered not taking it for a little while, remembering all of the debate last year about accepting free things and the fury of righteousness and vitriol that followed. I have decided to join Club Spiff because I have realized that I am not a journalist and that I’m a writer. A writer will write about anything that inspires and for me, right now, it’s an ottoman the size of The Ottoman. 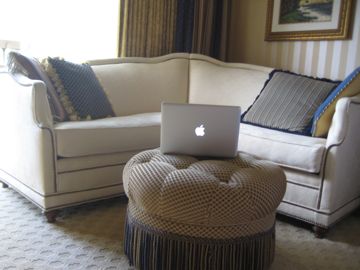 Nobody puts Apple in the corner.

The doorbell rings. A prince-level bellhop delivers a plate of fresh fruit. I contemplate telling him that I’m a frog in need of a kiss to complete this fairy tale, but instead usher him out before I say something even more embarrassing.

“I love you”, I whisper as he closes the door.

I have had wine.

I could eat this. I could chew it and swallow it and regurgitate it and eat it again. The winding halls that feel like a castle, the mismatched wooden furniture that somehow matches, the carpeted walkway to my room that feels perfect on my non-flip-flopped feet.

Over the two days I will steal seven bars of perfectly crafted soap. I will place two in an inner compartment of my luggage each morning, only to return several hours later with new bars in their place. I will wonder if there is a Soap Fairy, a milk-white soul who places fresh bars without any judgment because she knows at home I’m currently working with 3-fers from the $.99 store.

It is not the five star treatment or the real leather that does me in. I feel this exact same way when the generator spurts out on a remote island, causing the goat to actually stop goating because the silence shocks even the animal (goat=WTF).

It’s not even the chocolate-covered Oreo on the pillow. It’s the point that they didn’t just foil a regular chocolate and have instead mainlined into my dessert fantasies. I feel the same love in this strange, massive hotel as I do when an islander proudly shows me the straw cushions that function like a box spring and says, “Nice, you see?”

Except tonight, admittedly, I have Skinemax and a nipper of Jameson’s.

I turn up to my first-ever golf lesson wearing jeans and a track jacket. One wink and a swift golf cart ride back to my room later, I return wearing a collared shirt and khakis. Clearly I’ve never golfed before – my upbringing leaned much more towards free government cheese than it did trust fund clubhouses. 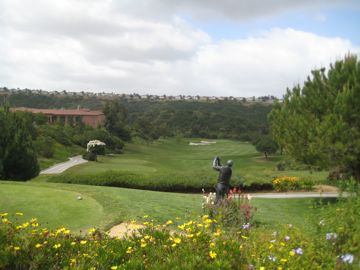 My pro is a guy named Wyatt and he feels like the kind of person who could teach me anything. His approach is laced with positive reinforcement. By the end of the lesson I want him to travel through time and adopt me in 1974, the year that I accidentally dropped the thing on the ground and learned that my biological father could become The Other Kind of Dad.

Wyatt is of the “divots are a good thing” school and encourages me to rip up as much perfectly manicured lawn as possible. I excel at destroying the turf and am given a huge pat on the back at every swing. “Whoo Tom. That’s great! Not on the mark but your form is great!”

I think again and again of my father and learning how to hit a baseball and riding a bike and fishing and hunting. How my bowels turned inside out at the thought of any lesson he’d ever given me, because it would always turn into a tirade and eventually The Belt. “This is how you learn then.”

Then Wyatt. Chuckling at my failures, yet raising my shoulder a tweak before my swing, a “Better!” after I drive the ball into a hopeless, westward tizzy. He offers a stance suggestion that helps my ball miraculously fly in a straight-ish direction. “Better!”. Then he shows me how to twist my fingers and I execute a strong shot, straight up the fairway, like the guys on TV. “Oh man! That’s gorgeous. Exactly how to do it.”

Wyatt drives me back to the pro shop on the silly little golf cart. He is the best teacher I have ever had. I will never see him again. 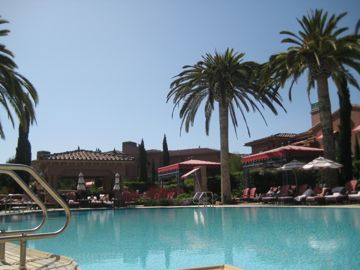 The hotel pool. No kidding.

The Renaissance Massage. You cannot know.

Step One: Coat guest in mud (“from Germany”) and place them in a pod that is not dissimilar to those in Alien, Avatar, Battlestar Galactica, etc. Push the button and gently submerge the guest in a free floating bath, an experience which feels like something between being a fetus and living inside a waterbed mattress. Witness guest panic for thirty seconds, then watch them have the most serene 30 minutes of his life.

Step Two: Let guest shower off the mud in a room with thirteen nozzles pointing from the ceiling and three walls, and not in a “hose him down” prison in-take way. Make sure to turn all nozzles on before guest enters because guest will take three to seven minutes to figure it out on their own.

Step Three: Give the guest a 60 minute massage in such a way that their thoughts go to a Hawking Place, no matter whether they graduated state college with a 2.7 or not (but only because of the one semester where they got a 1.6 because they fell in with the wrong crowd).

Watch guest walk straight into the doorway upon exiting the room, because guest has lost perception of reality.

I spend the last night having a dinner that food writers would call “scrumptious”, “succulent” and “mouth-watering”. It’s as simple as pulling my body from my room to Amaya, the hotel’s fancy-schmancy restaurant, where I order unfiltered merlot and beef. And a sensible salad.

I spend the meal much less focused on the food than on the staff outside. There is a wedding on the big lawn and there are dozens of waiters floating around. It’s a quiet algorithm playing itself out, all of these waiters whisking off to fetch more glasses, just before plating duck or turning up with a new napkin. 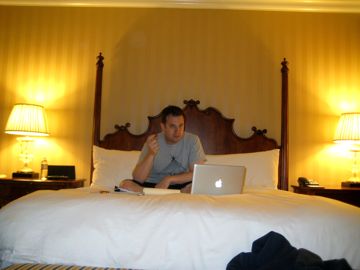 I want to talk to the people who work here, to give them a few drinks and ask them to spill their guts. Are they really as happy as they look? I have a feeling that they are.

I turn back to my own dinner and realize that my wine glass has been re-filled, even though I’d been ordering by the glass. The waiter comes by and winks, then whispers, “It was half-full. Somebody’s got to finish the bottle.”

I think maybe everyone who works here is a glass half-full kind of person. I think maybe this is why I love certain places over others. Straw or pillow-top, it comes down to the spirit of the people who run venues where other people lay their heads. The better ones know that the care can’t be faked, that every person inherently knows a put-on, and that we appreciate the real thing more than wine or chocolate.

Ain’t it the truth.

Tagged
Luxury Travel Narrative
What did you think of this story?
Meh
Good
Awesome