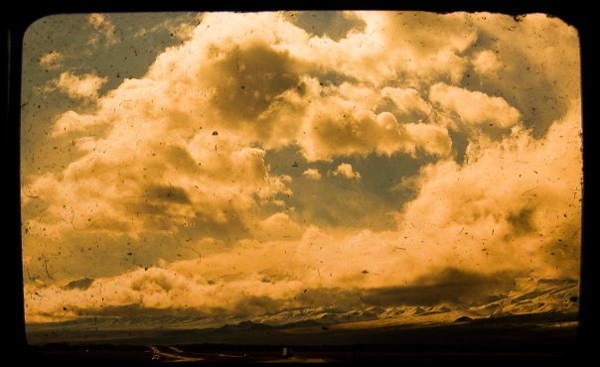 Sara B. May, “After the Storm (with TTV framing props to seriykotik1970 on flickr)”

Prudent folks bolt the shutters, make a pot of tea, and settle in to watch the Weather Channel. Others head out into the goods.

I’d snuck into Los Angeles from the west, over the water, in a twin engine turboprop piloted by professional madmen. They’d found a window in the storm and flown right through it. LAX looked like Costa Rica in the green season: standing water on the runways, weeds iridescent and blooming along the fence, air all black and gold, light coming in sideways under the sky.

There was a yacht beached between the breakwater and the airport, its starboard gunwale dug into the sand less than a mile from the marina, its mainsail still luffing off an abandoned port tack. Later, I would learn that the wreck had been there since some previous tempest, left as if to warn all foolhardy captains who would set out into weather. 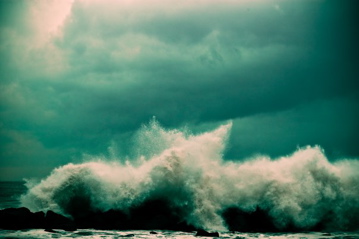 I’d spent too many long hours, years ago, running solo up the channel from Long Beach in fog thick as paste. I’d crossed the shipping lanes blind, no instruments, no GPS, nothing but the compass on the wheel to steer by — and the angle of the swell sloshing across the bow.

I’d motor for a few minutes, then cut it and drift, listening for the breakers off Point Vicente, or a lonely bellbuoy, or the chop of an inbound oil tanker set to run me over. Ultimately, it was the whine of jet engines coming into LAX that brought me home.

I’ve had enough black nights in rolling seas for my little lifetime. I’d be just fine with never again having to beat my way down a coastline in a gale, or to wrestle with the bowline on an errant skiff in a landscape of fifteen-foot combers.

But when the advisories go out, when the chairlifts shut down because of wind, and the chain laws go into effect, I still want nothing more than to suit up appropriately and get out into it.

I was on a simple mission to retrieve a car. It was my wife’s car, the family car, the one my boys call “Blue,” the one with the bad tires, the failing heater fan, the archeology of plastic animals, pistachio shells, and cheerios beneath the seats. The one with the leaky windshield, the duct-taped rear window, the occasional spoon-in-the-garbage-disposal noise from beneath the hood (except when we take it into the shop for diagnosis).

“For on such occasions Nature has always something rare to show us, and the danger to life and limb is hardly greater than one would experience crouching deprecatingly beneath a roof.”

I found the thing right where I’d left it, beneath a sagging, overgrown arbor of bougainvillea. I shoveled the wet leaves and debris from the windows and drove to the beach. The city was quiet, battered, bracing for the next round.

Out at the sharp end of the Venice Pier I drank a bottle of wine with an old friend. We held the edge of North America all to ourselves, the far-from-peaceful Pacific Ocean roiling beneath us, the swell rising, gray fading into dark, the promise of something big coming in.

We quickly overcame our sense of propriety, rolled a twenty dollar bill (or was it a ten?) into the empty bottle, corked it, hurled it out beyond the surf. One day the earth would dry out again and some scavenger or city employee would come upon yet another piece of trash on the beach.

Was there something grand and momentous we could say to that person from our great vantage in the past? Not that we could think of. A simple greeting seemed sufficient, and an exhortation to — why not? — spend it all in one place. 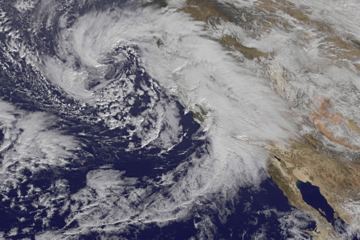 The storm flipped SUV’s and lifted boats onto the beach, NASA

By the time I finally got on the road the next day, having spent the morning gaping at the epic swell, stocking up at Trader Joe’s, wading across ponds to and from the lunch buffet at Tandoor-India, the next wave was upon us.

A full-on winter storm warning was back in effect all across the Western United States. Interstate 5 was closed at Castaic because of heavy snow and whiteout conditions on the Grapevine. 395 was barricaded north of 203.

From the radio came warnings of dangerous water spouts as far inland as downtown, of power outages across the city, of imminent debris slides along the burned-out scarp of the San Gabriels. Animal shelters were flooded. Planes were being struck by lightning.

The advice was simple: batten the hatches, hunker down, do not go outdoors, do not travel.

All I was lacking, I figured, were my snowboots (which in my haste I’d left at home) and a roll of duct tape. Otherwise I was good to go.

Here’s what I posted on my Facebook Page, on my way out the door, quoting in caps from the NOAA weather advisory:

“Waves hitting 20 feet at El Porto. Heading back upriver now into a PROLONGED PERIOD OF HEAVY SNOW AND GUSTY WINDS…CREATING VERY DANGEROUS TRAVEL… in a car with bald summer tires, a bizarre sound coming out of the engine, and a rear window that’s taped shut. have chains, blankets, iPod and red bull. should be exciting.”

The comments, which I didn’t see until much later that night, after finally digging three feet of snow out of my driveway and pulling that godblessed old vehicle into the garage, were mixed:

“Danger. Keep clear of this person.”

“Sounds stupid if you ask me.”

“I agree with Terry. Find a place to hunker down.”

“Keep rubber side down.”

Most of John Muir’s writings are far too mawkish for my taste. But the man knew how to find deep adventure in his backyard. “[W]hen the storm began to sound,” he once wrote of a fast-rising wind event in 1874, “I lost no time in pushing out into the woods to enjoy it.”

Not content to enjoy the spectacle from the ground, the scraggly naturalist climbed to the top of an old Doug Fir, a hundred feet up into the sheering sky, and for hours thrilled at the violent buffeting of the storm, tossing about “like a bobo-link on a reed.”

“This was one for the books. Like being in a speedboat, only better. You can’t go downhill in a boat. And it kept coming, the laden trees, the unbroken surface of snow, the sudden white vistas… switchbacks and hairpins impossible to describe. Except to say this: if you haven’t driven fresh powder, you haven’t driven.”

— Tobias Wolff, from The Night In Question

Whitewater tumbled down the highway in Soledad Canyon. I boated my way upward, against the current, counting wrecks along the road. The tires planed nicely.

At the old railroad town of Mojave, self-proclaimed “Gateway to Space,” slush came from the sky. The ceiling was low and black, as if pressing down on the roof of the car, but visibility was perfect.

Up into the Owens Basin the world was empty, save for me and the glistening road, the occasional Joshua tree casting a long shadow in the vivid orange light.

At 3:30 I got a call from my wife, in Mammoth. She’d managed to get the kids from school and was plowing over to a friend’s house in 4-wheel low. “Stay somewhere,” she said. “It’s insane.”

Past Coso Junction the rear window slipped free its sodden duct tape bonds. The air came in fresh and wet and cold. I found a pair of my youngest boy’s socks, stuffed them between the glass and the doorframe to hold the window in place.

In Bishop the snow was coming down in fist-sized flakes. I stopped at Kmart, bought a cheap pair of workboots and a roll of duct tape. Beneath a street lamp I wrestled snowchains onto the tires, then set off for the long crawl up the grade.

The last mile to the house is always the trickiest. I came up around the back way, in untracked powder deep as the car’s front bumper. A section of chain blew just below the entrance to Timber Ridge. Thwack, thwack, thwack it went against the wheel well.

But I made the crest, floated the last switchback home, the last downhill stretch like spreading frosting on a cake. I promised the next day to go out only on skis.