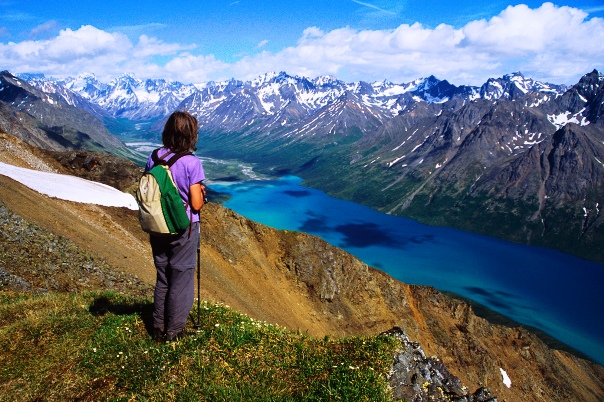 Spencer Klein heads up to the Ansel Adams Wilderness Area for some lessons in silence.

Attila had the stove lit early. We ate raw oatmeal and diced apples that we soaked overnight, and had coffee for warmth. The sun rose over the eastern ridge that separated the June Lake loop from Mammoth and it hit camp like the morning bell.

Then we set out. It was blue on all sides, but there was no breeze and that meant the summer sky would draw up moisture from the horseshoe valley of lakes to condense and fall. By mid-afternoon there would be a storm up high. By late afternoon the rain would begin to hit the valley.

“Fucking horseshit.” It laced the trail like brown buttons on a sandy ribbon. “I think I”m allergic to trails that allow horses. These are freshies too. What kind of a fucking—-” Atilla was a bit of an Edward Abbey type. He was the bearded man who always packed in whiskey and never missed an opportunity to illuminate the moral dissipation of America. All that and a topographic eye and razor sharp sense of humor.

We scanned the side of the mountain looking for the horses. Nothing doing. I pushed ahead of him. One foot in front of the other trying to breathe deeply without thinking of it. Three thousand feet in a few miles. And a good thirty five pounds on our back.

On a switchback I saw Atilla resting in the shade of a blue fir below. I went on. The silence was so much better for the both of us if only smudged by the shuffle of two feet instead of four. How could you ever carry along a good thought to its end? 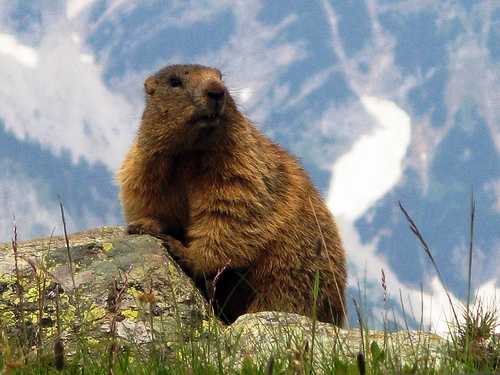 Responsibilities dissolve at some point, save for the inherent finding food and drink, then letting them go. All the rest flies off with the osprey above the lake. Effortless on air. How do they become so involved in existence?

A marmot whistle caught my attention. Then a chipmunk erupting in primal fear across the trail. All hind brain, no frontal lobe. Animals these days. Shouldn’t they be able to cast me as the type that has no taste for meat?

Maybe I need a little more hind brain. Give way to the automaton within: movement, posture, balance, breath. Those are the things that will get you to the top. Not your wistful banter and romanticizing. Though the peak looked idyllic. And there’s no better metaphor than ascent. One foot in front of the other.

When the sun was high I stopped to rest and wait for Attila at Agnew Lake. Twelve hundred feet above the trailhead. The plan from there was to climb the steep trail up to Gem Lake, a highly touted slice of the Ansel Adams Wilderness Area eight hundred feet higher, and then move on up to Clark Lake and Agnew Pass, where we would make camp. But when we saw Gem Lake we lost faith in that plan.

“Do you think there’s any relationship between the words damned and dammed?” Attila asked. “This lake right here — does it make any difference which word I use?”

“I don’t know Atilla. You might have something there. We’ll have to take a look at the etymologies when we get back to a dictionary.”

“Goddammit we don’t need any dictionaries,” he said. ” That lake there is damned.” A good laugh in the mountains embodies innocence. 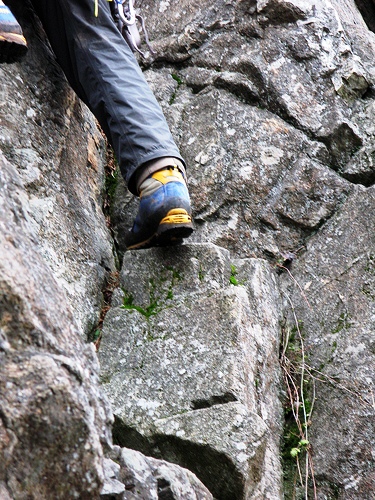 Our plans changed because the lakes were dammed. The whole series was dammed: Agnew, Gem, and Waugh, all three of the biggest lakes in the canyon.

You go to Chicago to admire something man made. Not the union of the Ansel Adams Wilderness Area and Yosemite National Park.

“Let’s go up a different canyon,” I said. “Isn’t there a different pass over there to the north.”

Attila saw a trail heading up the granite wall on the other side of the lake. We got out the topo and changed the plans. Then we took off our boots and aired out our feet.

We ate lunch and took off our shirts and put our boots back on. Then we had a swig of water and set off. It was a steep wall of loose granite. Rocks and boulders. I kept an eye and an ear to what was shaking overhead. I imagined death. Better to think of things like death. The leash to my teabag this morning had a quote: “The world is a tragedy to those who feel, and a comedy to those who think.” Not that all is a comedy.

Attila had gone ahead up the wall, all spry like a mountain goat. When I caught up to him he was lain out in a meadow in the shade of a cedar, his head resting on his pack.

“Just admiring the smell of the sage,” he said.

“No, we left that behind. Didn’t you notice?”

“How are you doing on water?” he asked.

We pumped from the small creek that ran from the meadow. It looked to be snowmelt as far as we could tell. Then we drank and had an apple and were off.

One foot in front of the other. Where are the dwarf huckleberries? Is it too late? We were climbing. From the meadow a dozen switchbacks took us through a dense grove of pines up another wall. From the clearing on the other side of the grove it looked like we were only a hundred feet below the pass.

Then a marmot sounded a whistle, and then another. Noise is ethereal in the mountains. Eleven or twelve whistles. I looked back and Attila had stopped to listen, fifteen feet down on the switchback below.

“Their whistles correlate with risk,” he said.

“What does that mean?”

“The more he whistles, the more danger he thinks he’s in.”

“Maybe we’re between the mom and her pups.”

The top of the wall was a false summit. Another wide meadow and a thin creek that was colder than the last. I iced my hand and held it to the back of my neck. Another ridge to climb, but now the wildflowers are out in numbers. Color is power. The hell with money. Wear red on Fridays because it instills energy. And it’s an international symbol of peace. Pink lupines and white lupines and yellow and red lupines. But sometimes red is so unnatural. Then a purple thistle. Beautiful. Green is the new black. Oh, yeah, everything green; green cheerios, green oil. Super.

Blue skies, thanks to the breeze. One foot in front of the other. Then the bedtime songs start to repeat and that gets annoying. The little guy is three thousand feet below me right now. He must be ready for his nap. I hate how mothers get all the credit for intuition. I bet he’s just now getting tired. I know he is. Father’s intuition.

I dropped my pack at the pass just to the side of the trail so Attila would see it. Yeah, the hell with money. But I would use it for good things. We’ve been so many places where so little would go so far. What if we built a soccer field right up to the sand in that small village just to the north of Playa El Zonte? But then my friends would be mad if I spent it all on soccer fields. No they wouldn’t. Give them all huge birthday gifts. Or just fly them places.

What if we built a soccer field right up to the sand in that small village just to the north of Playa El Zonte? But then my friends would be mad if I spent it all on soccer fields. No they wouldn’t. Give them all huge birthday gifts. Or just fly them places.

Attila will see my pack, but I know he’s just as proud as I am. He won’t climb this peak today because I’m already going up it. He’ll probably have a drink and set up camp. Hopefully he starts dinner.

I’m not that far from the Pacific Crest Trail now. That would be reality. Mexico to Canada. But I don’t have any thirst for the desert. Maybe here to Canada. I would rather be on the coast.

I can see the Minarets cresting over the ridge like alpine steeples. Fine mountain air. I can see the whole Mono Lake basin, the drainage network; mindsurf the glacier that formed this canyon, down the steep granite wall, over Agnew Lake, and down again, across Silver Lake and the valley into the basin and beyond. A foot here. A foot there.

If you have a Note from the Road you’d like to submit, please email david [at] matadornetwork.com.