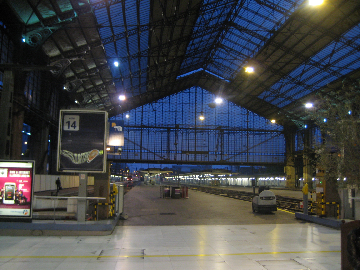 Photos by Tom Gates.
Tom Gates travels through France on the Eurail, stoking out on trains, but not necessarily all of the passengers.

Paris Austerlitz Station at dawn. A security guy roams the building on a Segway, thus stripping himself of any authority.

The coffee shop contains one employee breaking open bags of filters, her face giving away the disbelief that she’s pulled this crappy shift. Two late-teen looking girls clutch their bags with a remember-what-dad-said look. The board is lit up with departures but no gate numbers. The hall is train-less.

This is the best time to travel. Back at home, I have a terrifically difficult time pulling myself out of bed before ten. Out here I book morning trains and force myself out of bed. The jump from the top bunk always marks the moment that I am asleep (up there) and the moment I am awake (when my gross motor skills jar to life, in an attempt to save my life as my feet hit the cold floor.)

A conductor is whistling, destroying the quiet vibe of the big, hollow room. The clock strikes six. I yawn and everyone follows suit. The whole thing is more of a mingle than it is a morning rush. I count ten people eating croissants. I am definitely in France.

You could not have paid me to fly. I’m a Theroux-ist, falling for these big beasts that rock and sway and creak and arrive where you want to go, not thirty miles away at a deceivingly-named airport.

I board the train, pushing the button that opens the doors with a wheeze. I will push through Chateauroux, Limoges and Brive, at which point I will switch to a second train. Five hours, door to door.

You could not have paid me to fly. I’m a Theroux-ist, falling for these big beasts that rock and sway and creak and arrive where you want to go, not thirty miles away at a deceivingly-named airport. Every promise about plane travel has become a lie, with the exception of the time you make up in the air. The day that I pay extra in an exit row is the day that I invent a time machine and be done with it.

The Eurail Pass made things simple for me. I had imagined agents rolling their eyes at my mangled French and instead got a lightning-fast transaction, my booking complete in seconds. The train was rather gorgeous and “stoked me out”, as my friend Brian likes to say. I fell back into my chair and basked in a tray table that was big enough to simultaneously hold my coffee and laptop, which is all that I want out of life.

We rode through misty fields. Little houses with chimneys and men who looked like Girard Depardieu. Enough goldenrod to make anyone reach for a Zyrtec. Castles that looked too fake to be real. I fell asleep and dreamed about being at the bottom of a well.

Another station. Rap plays through the speaker of a teenager’s phone. It sounds tinny and I lament the death of fidelity. The artist raps in French and mimics American hip-hop, sounding just as big a clown as ours do. He wants money. He want cars. He wants fame. He demands it. What a goddamned bore.

At the counter. I hand her my Eurail pass and try my French. She laughs and makes my booking in English, trying to teach me how to say things in French at the same time. 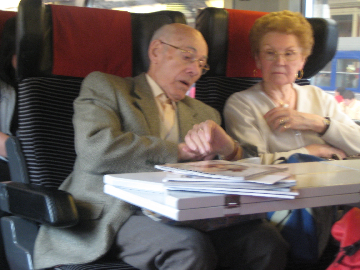 She shows me how to talk with phlegm in my syllables. She is more than a booking agent. She is my savior. I will never see her again.

I get on the train and listen to Husker Du really loud and consider losing ten pounds. Then order a croissant from the trolley.

Another early morning. A flap of skin hangs from the top of my mouth. Nobody told me that tapas could be hot, too.

I’m on board the SCNF, which is wonderful and punctual. I sit across from an elderly couple. The man yells as he talks and the woman hushes him after every fourth word. I don’t need to speak French to know that they’ve been together for years and years. She smiles as she shushes, looking at her man in a way that suggests the kind of toleration that comes with adoration.

The train is magnificent, a real sleek beauty that doesn’t befit my CBGB’s t-shirt. Ruby carpets and black, pinstriped seats. It pulls out exactly on time, rolling past the graffiti that accompanies just about any stretch with concrete walls. Much like the French rappers, any retard with spray paint seems to tag nowadays. I strain to see some genuine art and come up short. Just lots of names and initials and wasted paint. 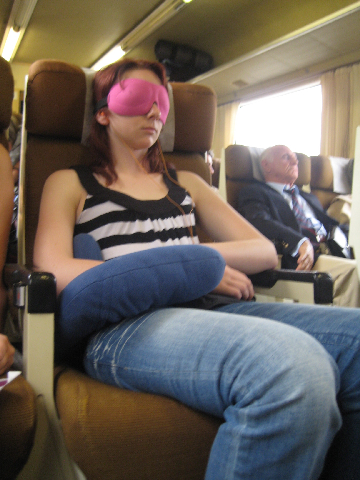 How did people survive travel before the advent of the walkman/discman/iPod? They are next to me, talking nonstop. Three American girls.

“Like. Like. They like. Ugh. Seriously.” The poor dear can’t even get three words out. “Like, I know Greg. I mean, I KNOW him, you know? Seriously.” I catch the rhythms of their inflection, a sing-songy bastardization of English.

I have the backwards seat, the solo one that pits my knees against the opposing traveler’s shins. They are two sleepy girls with airline sleepmasks. I can only hope that their eyes are closed by behind the masks, because their mouths are puppy-like and drooling. Their bags lay unattended, passports out in the open. Somewhere, their mothers are worrying, and not needlessly. Their daughters are idiots.

The train is a Talgo. It smells like the sawdust and ammonia that is used to clean the Tilt-a-Whirl after somebody spews a funnel cake.

The girls across the way don’t stop talking for three hours. They’re from a reality show generation. More talking means more screen time. “Dave Matthews. I like, can’t even put him into words.” The earphones are in her ears, the music playing as she talks.

I am certain that they are what keeps me from returning to America. I tell myself that it wasn’t the sinkhole that had become my life. It was these girls. It was their fault.

Tagged
Narrative Spain France
What did you think of this story?
Meh
Good
Awesome

How To Spend a Luxurious Weekend in Saint-Tropez

These Views Are Why You Should Visit Normandy Instead of Paris