MACARONS are not cookies or cakes, but something in between. They are crispy (but only just barely) and smooth. They are not toothache-sweet or dense or rich. They are small, two-and-a-half bites, exactly.

We visit the rainy Champs-Elysees on a Tuesday at dusk when everyone is hurrying, wearing pumps, and trouncing their own slick reflections on the sidewalk. We cruise through the Louis Vuitton store playing a game: Guess how much that dress costs. I want to touch everything, to try on everything, to feel the cool fabric slide over my head—a white wool sundress with crisscross stitching, a dusky silk gown with pale pink feathers that peek out the bottom, jewels set in platinum without price tags except for the words, Demander pour le prix.

Afterward we visit the tea room. It is the famous one, gilded and palm-fronded. I order a macaron, the specialty of the house. I’m somewhat disappointed when it arrives. Everyone else has chosen enormous salads and napoleons of goat cheese and sprouts and potatoes. Mine seems very flat, the plate very empty.

I forgo the fork and pick it up in both hands and take a bite and my life shifts: before macaron and after. 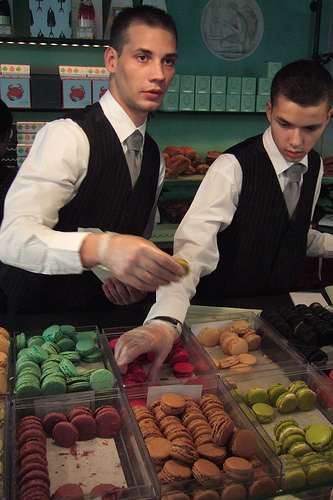 Between classes I run over to the Luxembourg. Enormous raindrops hit the pool that reflects only gray sky and churning clouds. I fly by the pale, eyeless statues of French queens, the square-cut trees that are pruned back for winter. I splash through puddles that have collected in the gravel paths. I have ten minutes to get back to the auditorium where I will sit for two hours with 100 other not-French people and learn about French things.

The shop is tiny and its automatic door glides open. The first thing I see are the rose petals, blood red and sugared and perched on the tops of little cakes and fondants. I want one of everything, but I have a mission.

The macarons glisten under the lamps. Some are dusted with powdered sugar or cocoa. I choose two, pistachio and rose. I have no idea what rose is.

Before I came to Paris, I read so much about the French and their leisurely, seated, fully-savored, obesity-fighting meals. But lunch on-the-go is a way of life here. There are take-away sandwich shops everywhere. Even the bakeries offer prepared lunches. You see everyone walking, clutching a baguette and chewing.

I eat my macarons on the way back to class. They fit in a little cellophane bag. I don’t have hands for anything else. I have my books, purse, umbrella. I balance the umbrella against one shoulder and fish out the rose macaroon.

I make a noise. That’s how delicious it is. It is roses and roses. The ganache in the center holds hints of lychee and spring. I smile for the next ten minutes, all the way to class.

Somewhere between my apartment and the Arc de Triomphe, before the gilded iron gate of the Parc Monceau or maybe after, I walk into the patisserie and I am the only not-Japanese person there.

I have heard about this, about Japan’s obsession with French pastry. The shop is lovely and done up in pinks and violets. The salesgirls speak Japanese to everyone except me. When it’s my turn at the counter, they shift into French.

I point at a mountain of pink macarons and ask for a raspberry.

Without a word, the girl takes a macaron from an entirely different, slightly pinker pile on the other side of the counter. I feel like an idiot until I realize that this miscommunication has nothing to do with language and that I should stop projecting my bad-French baggage onto every pastry in Paris.

She hands me a little bag. She does not smile.

The macaron is light, a little sticky in the middle. But there is something slightly weird about it. Is that a whiff of artificial flavoring? Framboise en bouteille?

In France there is lovely-opulent and scary-opulent. The shop, with its gold-leaf logo, its cakes done in heaps of molded cream, feels like the latter. It feels like an American idea of how France should be—velvety and decadent and purple. The guidebooks tell me this place is very famous.

It feels like an American idea of how France should be—velvety and decadent and purple. The guidebooks tell me this place is very famous.

The woman behind the counter speaks such heavily accented French that I can’t understand a word of what she says. When I point to a neon orange macaron and inquire about the flavor, she says, “Orange!” like I’m the stupidest person she’s ever seen in her whole life. “…Et chocolat.”

I’m told the pastry shop near the Pantheon is where people in Paris get their macarons. The boy behind the counter is shy-eyed and cute and I cannot decide between the flavors, the mountains of pale colors behind the glass. Finally, I chose the caramel beurre salé.

It’s undeniably salty, but is this really a flavor I want on a macaroon? I return the next day and choose something sweeter, and more my speed. Blackcurrant.

I walk until the modern buildings start to crop up around me and Paris starts to feel like not-Paris and like a high-rise complex full of boxy, unadorned apartments. This is the Paris that makes me uncomfortable, the dissolution of the fairytale.

There are macarons in the windows and the glass cases in the darkened shop. I keep staring through the door thinking someone will appear, but no one does.

I get my fix back at the Luxembourg shop later, after I have given up on walking and patience and restraint. This time, I am absolutely not screwing around. I choose two. White truffle with hazelnuts and passion fruit with milk chocolate.

I eat them on a bench in front of St. Sulpice with the fountains gushing curtains of water and the church trembling, almost, against the very blue sky, the spires pressing against its curve.

I go back. Of course I go back. This time, the shop is open and the rows of tarts and cakes and custards stand in cheery contrast to the rest of the neighborhood, its concrete.

When I ask for a cassis violet and a noix de coco, s’il vous plait, the guy nods and says, “You can speak English here. No problem. I wish more people in Paris spoke English.”

He then goes on to tell me about his friend in Philadelphia, his love of Bruce Springsteen, his surprise at learning that people from Texas are not really like people from New York, his ideas about American perceptions of pleasure and ambition. He tells me all this while he’s wrapping up my macarons, putting them in bag after box after bag as though I’ve bought 40 instead of two. Later, it will take longer to unwrap them than it takes to eat them.

As I’m heading out the door he nods and says, “I see you tomorrow.” And I wonder, for an instant, if maybe he will.

For more narratives on Paris, check out Joel Runyan sleeping in the park by the Eiffel Tower.

Tagged
Narrative Paris, France France
What did you think of this story?
Meh
Good
Awesome