As a quiet warrior of a child, I secretly hoped I would be sent off to live with my godfather when my parents were being too strict. It was a secret pride I held knowing that I could escape to the jungle if need be. Memories of Kauai and my godfather / cousin Christopher Robin were like glowing childlike adventures from A. A. Milne’s book — except Pooh’s dear friend Piglet would be served for dinner.

I spent many summers of my childhood in Kauai visiting my cousin Christopher Robin. When I was around 10 years old, I remember hiking with him along the Napali coastline when he told me he would “be right back” and to “just keep going on this trail.” Enough time had passed for me to feel like a rebel but not enough to make me worried when he caught up with me with a goat over his shoulders. He had shot it with a bow and arrow, and we would smoke it that night. He smiled and tossed me some lemons he’d picked that tasted like oranges, and I happily ate them until my tongue was raw. I remember thinking that he was wild, and that the wild was a good thing.

Prior to my most recent trip I hadn’t been back to Kauai in 10 years. Christopher has a family now, and they live happily against the mountains and enjoy smoked wild boar when fate allows — which is often. I wondered if my glossy memories of a wild man in the jungle would still fit with the Christopher Robin of today, a man of 42 with four kids and bills to pay.

I’ve always wanted to make a short film about Christopher. I feel that the films I want to make most are the films that need to prove something to myself, like “Do what you love and the rest follows,” or “Be the change you wish to see in the world.” With this one, it was about the wild. Because I buy meat from the grocery store and the only proof I’ve ever killed something is a photo of me when I was five with a fish at the end of a line. I told Christopher’s seven-year-old daughter Elva that I’d never killed anything and she seemed surprised, and maybe a bit confused as to what I was all about. Later, I saw her hold the heart of a wild boar she’d just hours before called “Pixy” while feeding the caged animal guavas.

There was only one other filmmaker I could think of to bring into this world. I asked Thatcher Bean to co-direct the film because of his own curiosity for what Kauai holds, and for his unique eye for beauty in nature. We spent two weeks in a tent in the pasture behind Christopher’s house. What we captured there will be made into a short film to be released later this year. Stay tuned. 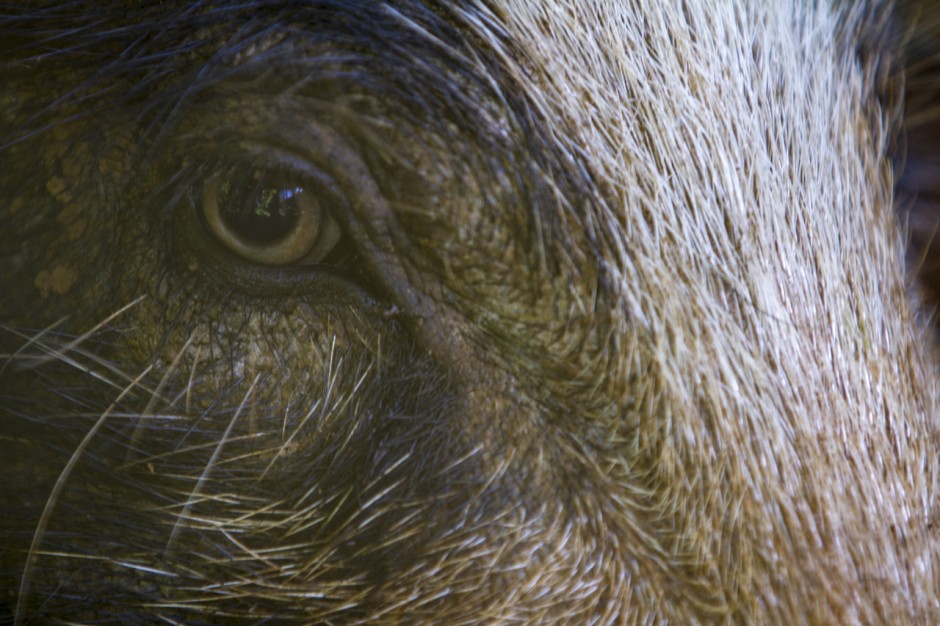 Caught in a trap, Pixy the boar awaits her fate. She was wild, but familiar and almost pet like to the family because she lived near the house. There are efforts to eradicate the boar in Kauai, so Christopher has traps that he’ll leave on land where the owners have a problem with boars on their property. 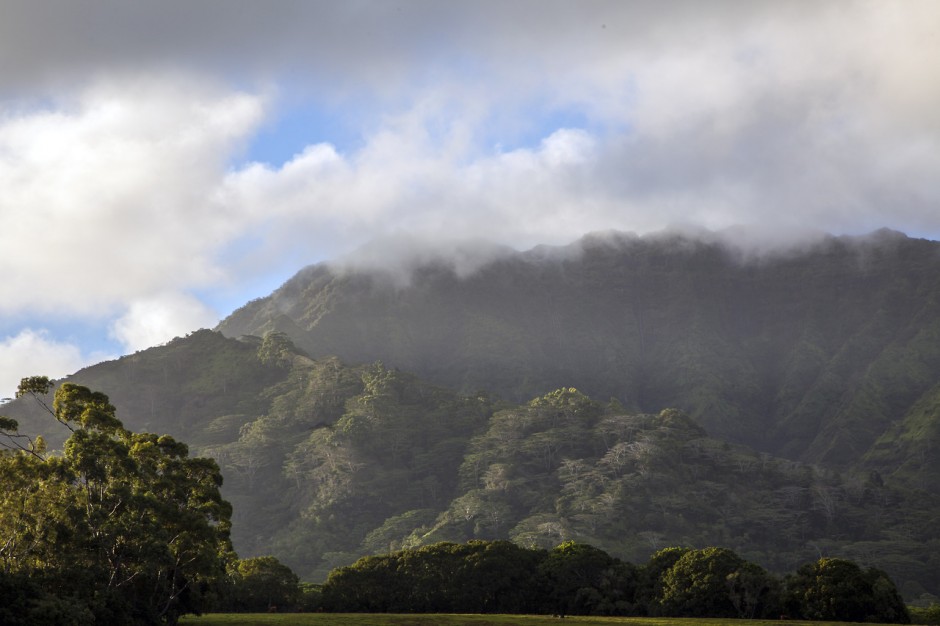 Our view from the tent. If you look closely you can see the waterfalls. 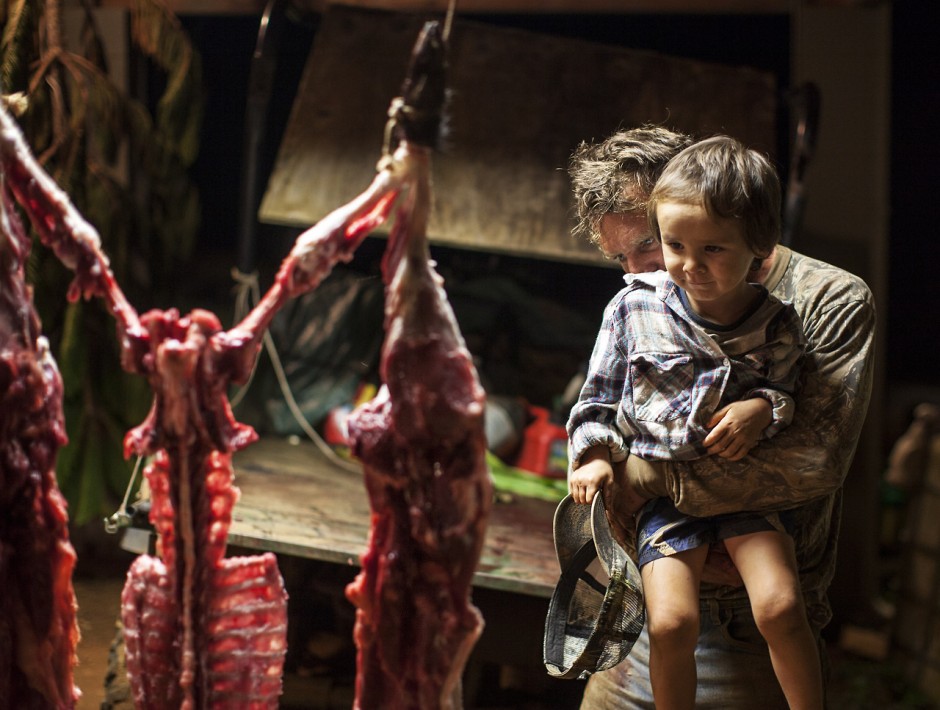 Passed down to the kids

We had the opportunity to film Christopher skinning boars a few times, and his 4 year old son Pali was always there asking questions and curious about what his dad was up to. His questions were not far from my own. 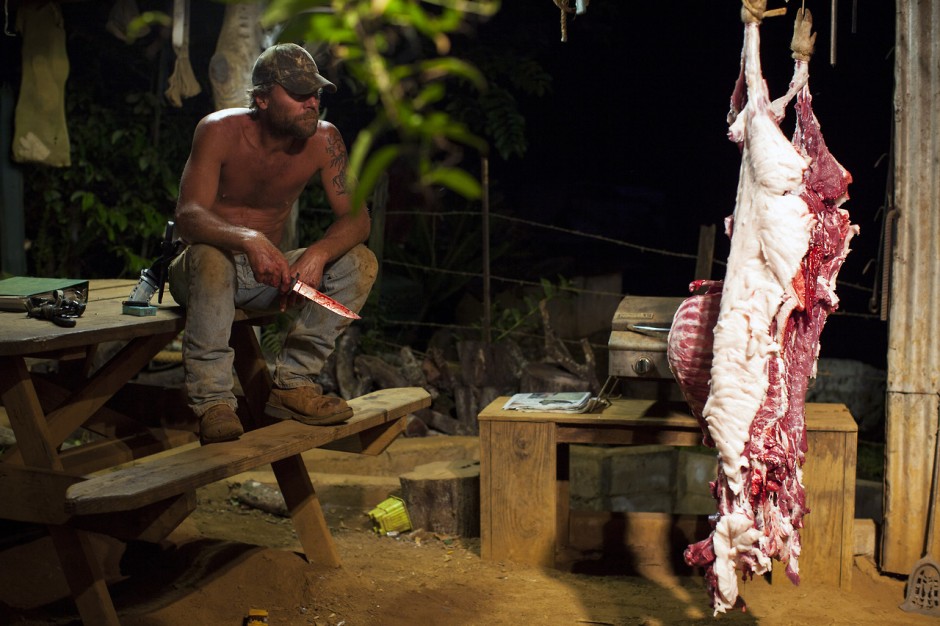 Boar meat is a large part of the family’s diet. Almost all of the boar is used, and Christopher’s favorite way to prepare the meat is to smoke it. Skinning and deboning the meat takes a good hour and the smoking process takes about a day. 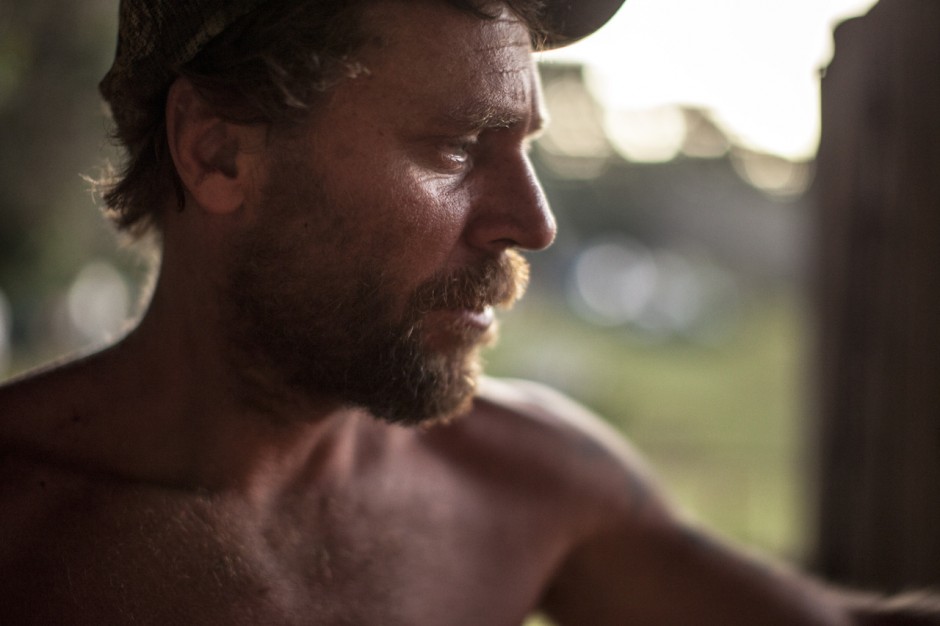 Blurred between local and haole

Christopher has lived in Kauai for over 20 years. He has a strong connection to the heritage of Hawaii, and sends his kids to Hawaiian speaking schools. He believes it’s important that they are connected to their roots. Although when he talks about home, it’s still New Mexico that he is speaking of, and his kids know where dad is from. It was fascinating to talk with Christopher about being a white local in Kauai as it is such a touchy subject there. 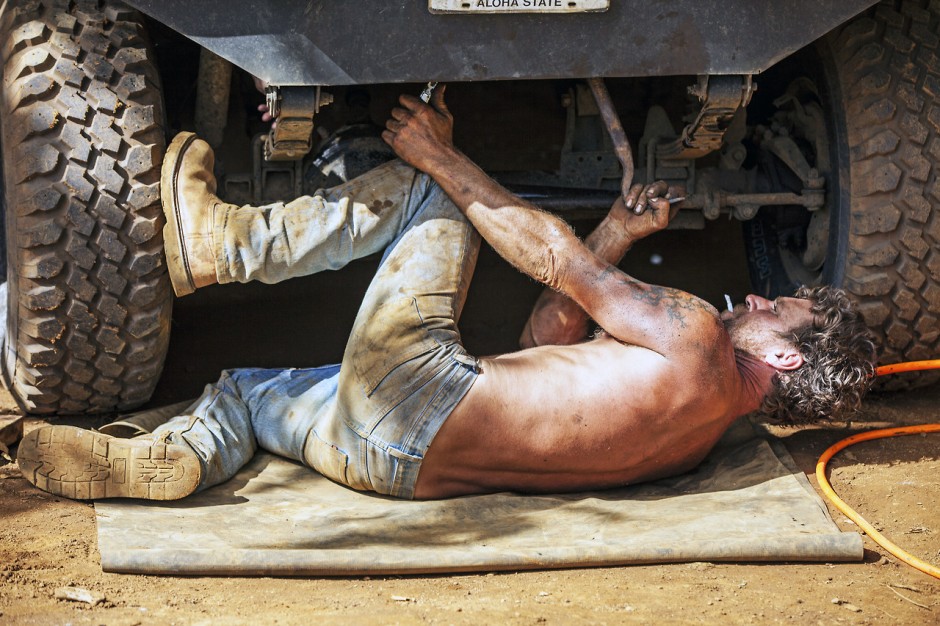 We were super grateful for Christopher to let us borrow his truck to romp around the island. The truck is built for hunting, and it’s got the smell to prove it. Christopher is well known in the area so we got a lot of shaka and waves from locals until they saw us clearly and called Christopher to see if someone stole his truck. We waved gleefully back and tried to act cool, but we were obviously two tourists in a cool truck. 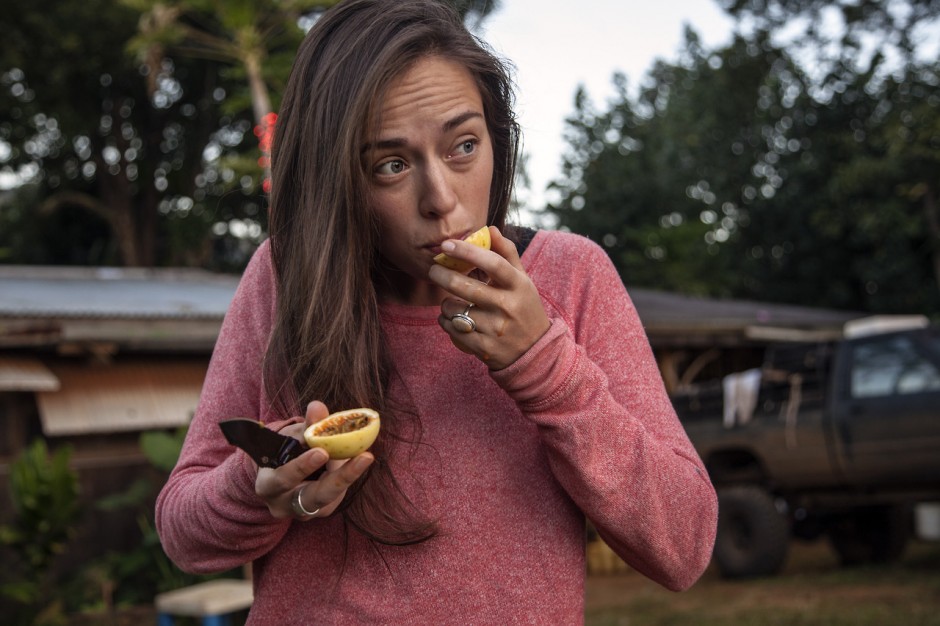 If I could live for fruit

Lili koi grew around the house, and I was told if I stayed a few more months I would have more mangos then I knew what to do with. I made it a new goal to have different fruit all over the world, and if I can enjoy that fruit on the beach? Extra points. Fruit is the one thing I have no worries about hunting for. Photo: Thatcher Bean 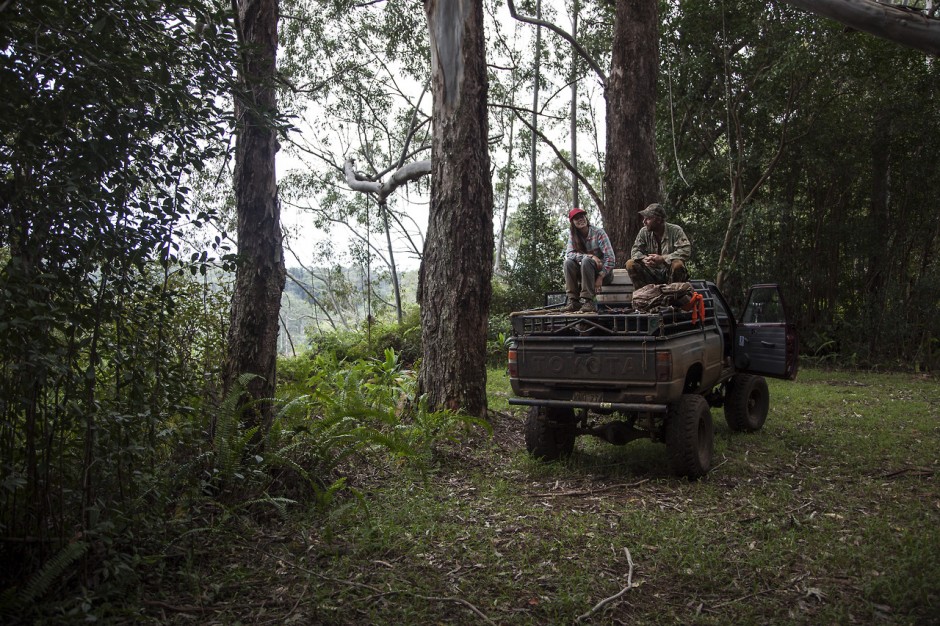 Christopher took us out into the woods several times to hunt with just his knife and dogs. It was the most intense hiking I had ever done. Weaving our way in and out of trees and vines, scrambling up through the mud, I was told there was a trail although it took some effort to follow it. It was a challenge for filming but I was so thankful to see a part of Kauai that few get to see. Photo: Thatcher Bean 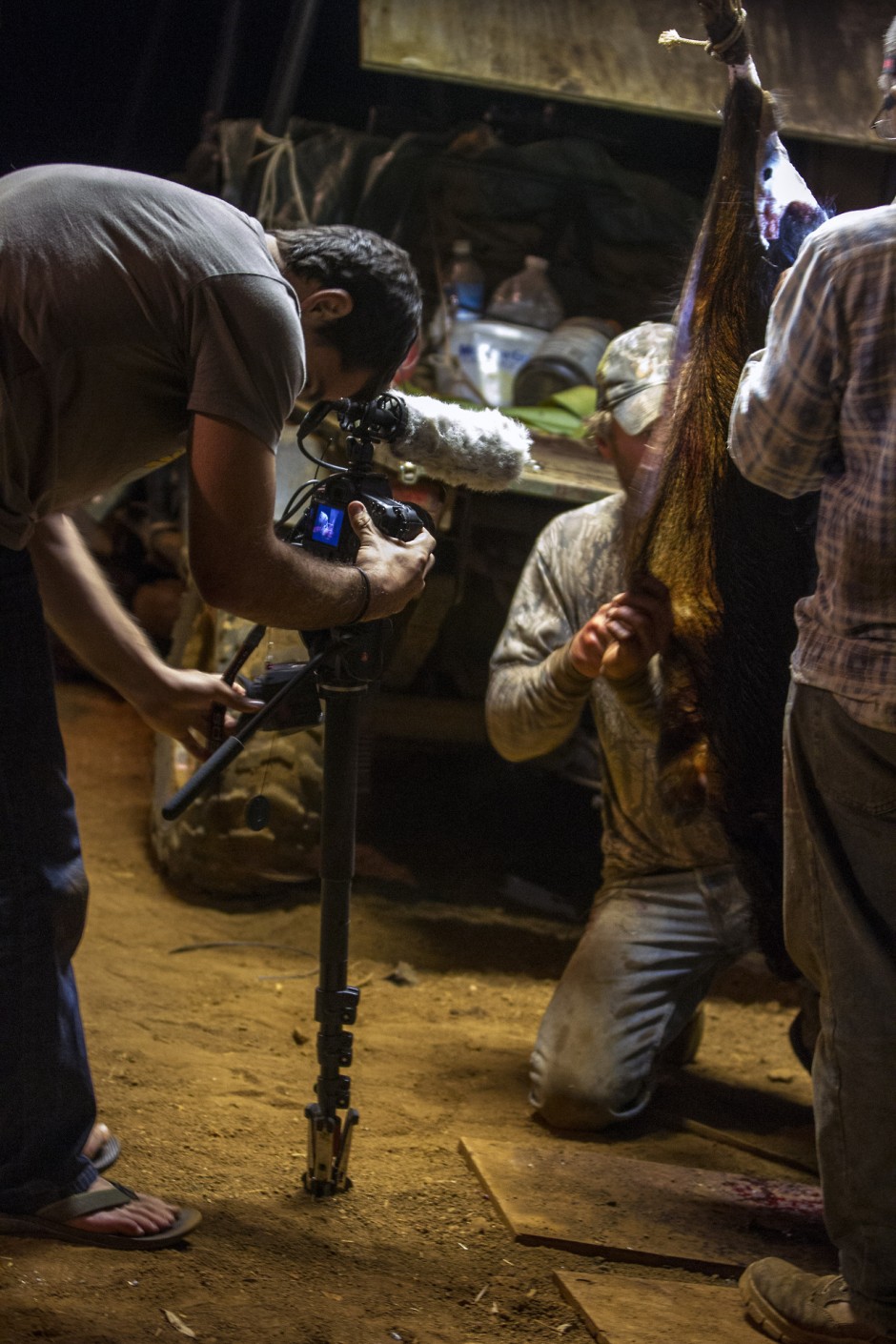 Thatcher wanted to largely concentrate on sound for this shoot. We had mics hanging in various spots around the boar and Christopher as well as a shotgun mic pointed at the action. Thatcher wanted natural sound to be the element that pulls people into the moment. After watching the footage I think that I’ve changed my whole strategy for audio recording for documentary shooting. It was exciting to push the boundaries of what is possible for run-and-gun shooting. 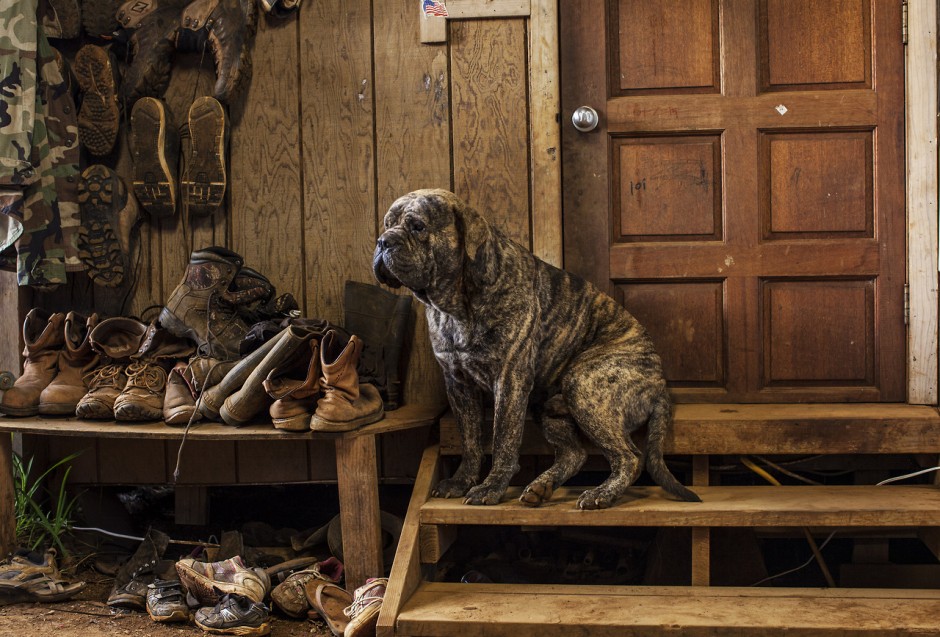 Guardian of the house, all drool no bite, Oso the dog was a daisy in his last life. His stench hinted that he may have rolled in boar poop all day, but he had a face that made you want to cuddle him from afar. At full speed he is easily confused with a charging bull, and I perfected my bullfighter's dodge to avoid his streams of glistening drool.

Tagged
Hawaii, United States Ambassadors
What did you think of this story?
Meh
Good
Awesome
✖
travelstoke
Download the mobile app
stoked by