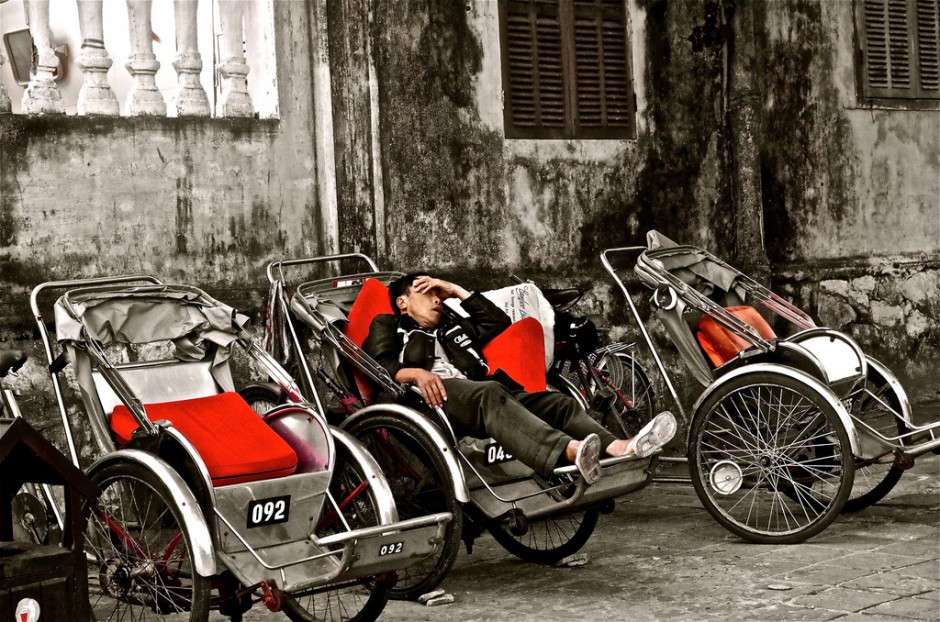 I took this photo walking back to my hotel in Hoi An, central Vietnam. I was leaving the next morning, and after packing I would have only a few hours left to wander the artfully-lit streets. I'd resolved, firmly, to put my camera away, determined to experience the place live and not entirely through a camera lens.

Just before crossing the bridge, I spotted this guy taking a nap in his rickshaw. I'd met him the day before. His name was Sit. I'd had a dark and syrupy Vietnamese coffee with him and his friend Hoang. His English was bad but his signing and drawing on napkins was good enough for a conversation. He wouldn't let me pay for the coffee but was highly amused that I kept notes in my bra.

"Girl pockets," he repeated, shaking his head and chuckling, and translated for Hoang.

It was strange to see such an energetic guy asleep on the job. Before I had time to remember my self-imposed embargo the camera was on my face, the lens cap in my bra, the extract colour setting on and the scene captured.

Moments later, his friend shook him awake for a fare, a French couple with day packs. Sit sprung into action as if he hadn’t been napping at all, jumped onto the pedals and started nodding and laughing with the couple. He rode past and over the bridge, trilling the bell. He didn't see me.

How to: Ride an overnight bus in Vietnam