It’s a beautiful life on the far southern edge of the world. The woodstove in the corner is crackling and cuts the light chill of the late summer evening. Beers are opened as the conversation drifts cleanly from the meaning of life and yarns of past adventures to the group of Swedish girls a couple of the boys were chasing the last time they were in town. Outside, the Southern Cross gleams in a sea of stars above the small hut on the Awarua River and, if you listen closely, you can hear waves breaking in the bay. The generator out back is running smoothly and the chiller is full. A freshly shot and cleaned red deer hangs in the cooler next to a few cases of Speight’s Gold Medal Ale. A box on the floor holds half a dozen large red spiny lobsters, or “crays” as they call them in this part of the world, that we pulled up after the afternoon surf.

The salt and sun crust from a long day in the water is visible on the smiling faces of everyone present. Arms and backs are sore from hours of splitting peaks on a lonely A-frame and chasing the crays around the rocks 15 feet underwater. Several of those big bastards have already found their way into the pot and are being cracked open and devoured by the hungry crew surrounding me. The smell of fresh venison being sautéed with garlic and onion fills the small room, along with the easy laughter of contented men who have been living well and know they are in for a feast of the first order. The venison is served and glasses are raised in a rowdy cheers to the bounty the land and sea has provided, and the simple joy of being a long way from anywhere.

The area we are in is known as Fiordland. It’s New Zealand’s largest national park, comprising over 4,800 square miles and established in 1952. We’ve all come to this far removed corner on the southwest tip of New Zealand’s South Island to explore one of the world’s most remote coastlines at the behest of Warrick Mitchell. The sturdy hut that will be our base for the next 10 days was his childhood home, and it’s obvious from the moment we arrive that this land is sown into the fabric of his being, as much a part of him as his blue eyes and easy laugh.

It isn’t cheap to keep a homestead this far removed from the modern world. The simplest things need to be flown in by plane or helicopter, and maintenance is a constant series of Sisyphean tasks. To help offset these costs, Warrick has taken to sharing this remarkable place with small groups who come to surf, fish, dive, and hunt through his operation, Awarua Guides. More than any single activity, it is the chance to partake in a way of life both rare and jealously guarded from the outside world that has brought us to the southern edge of the world and this small hut on the banks of the Awarua. 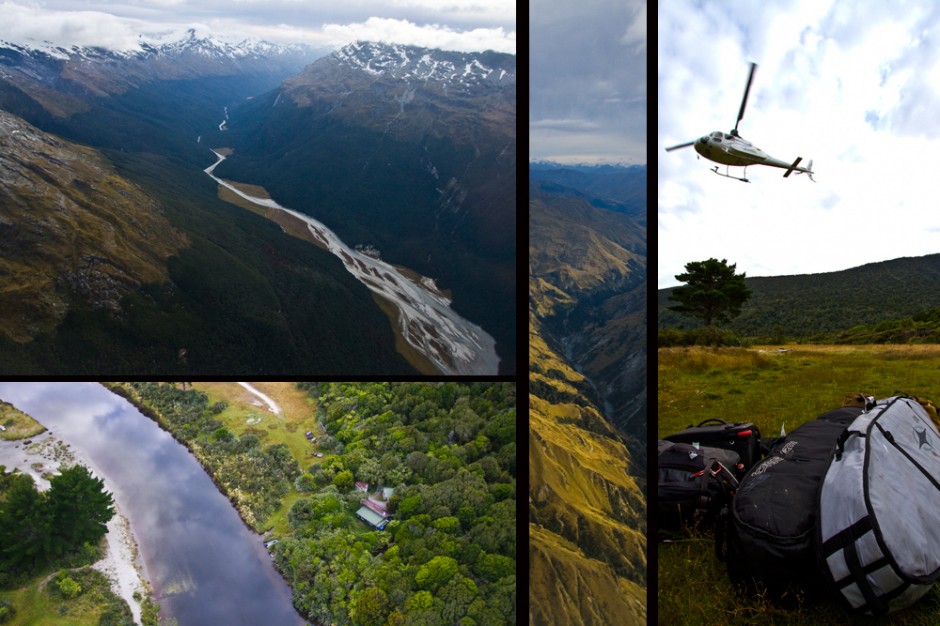 Lifting off in the polished AS350 B3 helicopter, lovingly referred to as “the squirrel,” an hour after sunrise we are quickly above Queenstown and gaining altitude as we head due west. It's immediately evident that while Queenstown thrives on providing safe ‘thrills with no skills’ to the masses, the surrounding natural environment is, and always has been, the real draw. Braided rivers give way to steep, densely treed valleys rising towards the glaciated peaks of the Southern Alps. The bird’s-eye view afforded by the helicopter lends perspective to just how severe the wilderness below us is. 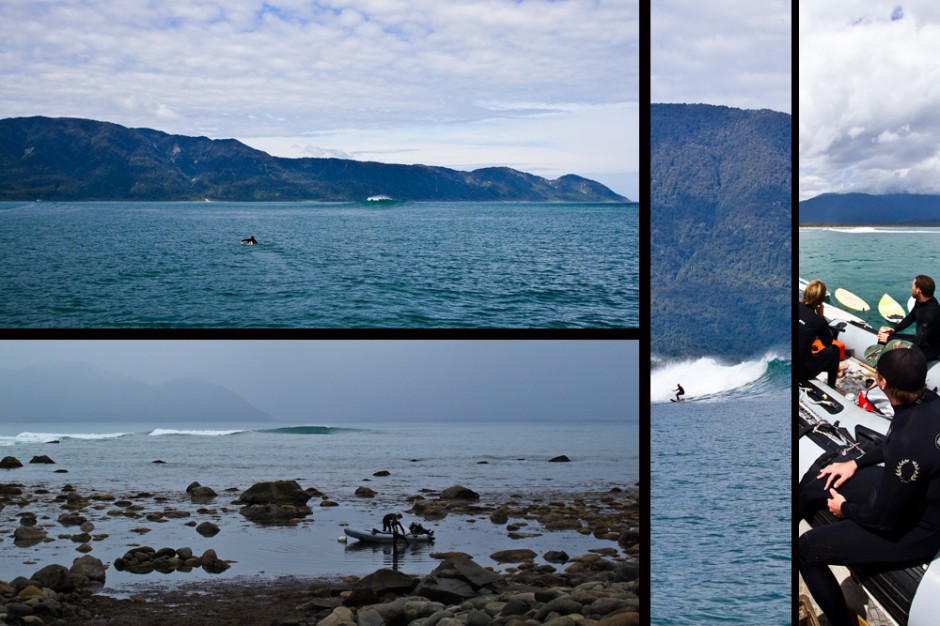 An afternoon high-tide surf on the southern edge of the world. The first surfers who came through this area in the early '90s caught the eye of a young Warrick, and before long a small group of talented New Zealand surfers were spending weeks at a time at his family compound. The bay and surrounding area host a cornucopia of high-quality waves, but it's also a coastline with many moods and predictable it is not. With Warrick’s help, we managed to put ourselves into some pretty waves on our first afternoon. Over the following days we would see so many faces of the same stretch of water—from violent winds and pounding rain to sheet glass perfection—sometimes within minutes of one another. 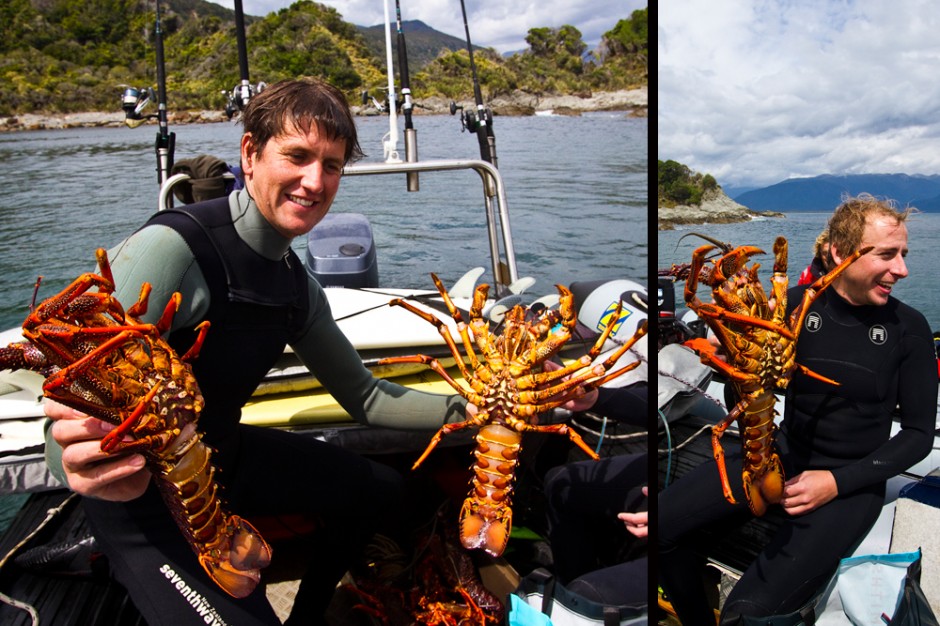 Grabbing dinner in the afternoon. Warrick had schooled us in the technique of remaining nonchalant when approaching a group of crays, how to move very slowly until you are within a couple of feet and then stop moving completely for a second, making the cray believe you are not a threat, and then, in one quick and simple burst, pin him by his back to the rocks or grab the thick spiny horns close to his eyes. It's a technique he has perfected. Thanks greatly to the 1990 implementation of a Quota Management System (QMS), which closely controls commercial and recreational catch limits and the 10 marine reserves where zero fishing is allowed, Fiordland boasts some of the healthiest populations of the species found anywhere in the world. 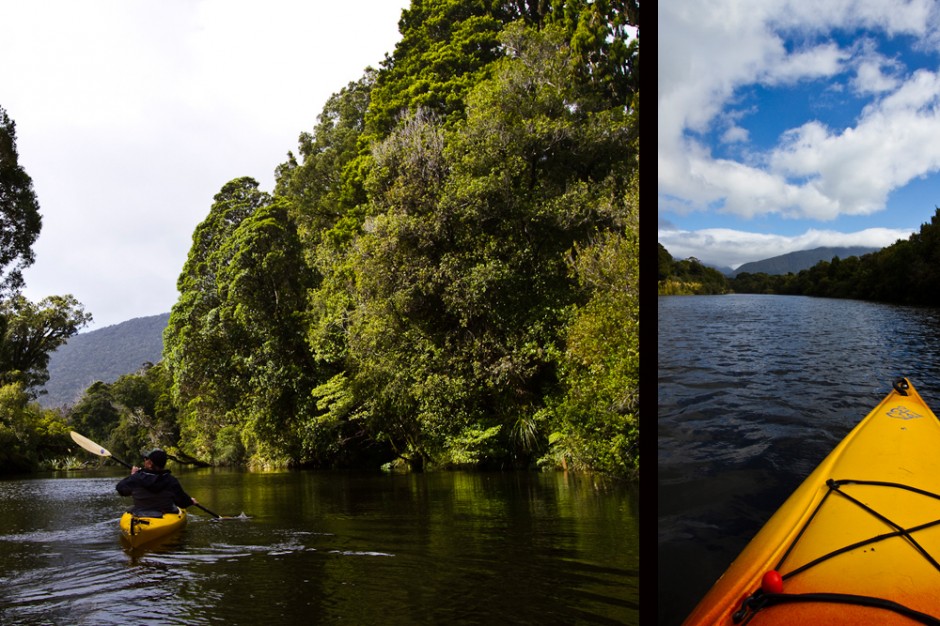 Kitt Doucette paddling the Awarua River on an afternoon trout fishing trip. From late August through November, Big Bay and the Awarua River population swells by a few dozen people who come chasing whitebait. Whitebait is the generic name for juvenile galaxiids and are a small fry fish eaten whole. A delicacy in New Zealand, whitebait fetches as much as $150 a kilo in the markets of Auckland during a good year. In addition, the Awarua River valley and bay were sacred to the Maori as an important source of pounamu. Generically called "greenstone" in New Zealand English, pounamu refers to several valuable types of nephrite jade found only on the South Island of New Zealand. The solid, resilient stone was treasured by the Maori for its ability to be carved into tools and ornaments. 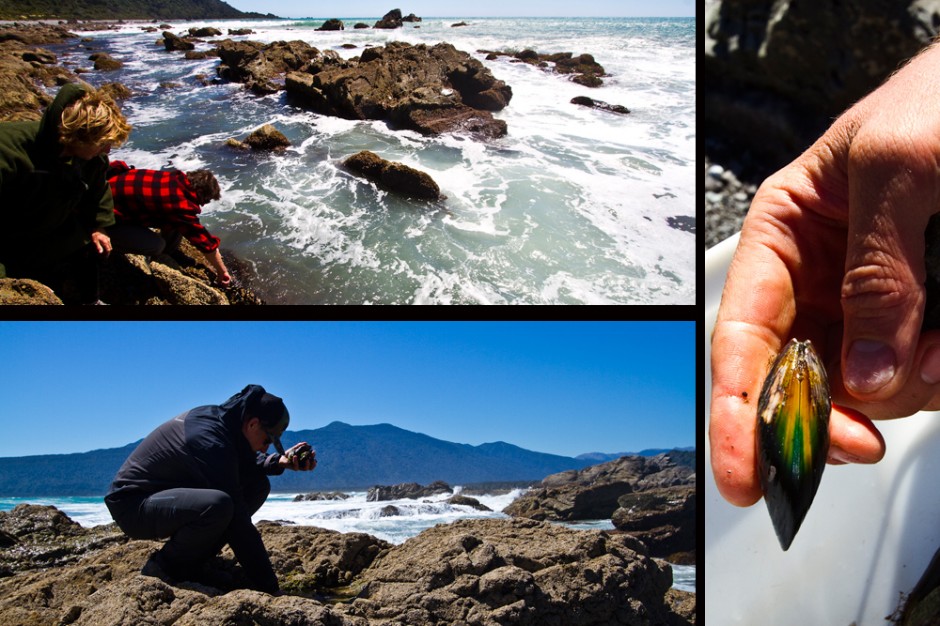 Gathering green-lipped mussels on a windy low-tide afternoon. Tide, wind, and swell command daily life out on the southern edge. The current state of each dictates everything, from when the first pot of tea is put on in the morning to what's on the menu for lunch and dinner. Swell is small, tide is low, and the prevailing southwest wind is howling? Jump on the quad bikes and race down to the south end of the bay to pull some green-lipped mussels off the rocks for lunch. Tide is high, swell is small, and wind is out of the north? Off we go to grab some crays at the north end of the bay. Tide, wind, and swell are all up? Grab a reel and go trout fishing up the river. Waves have turned on? Go surf. 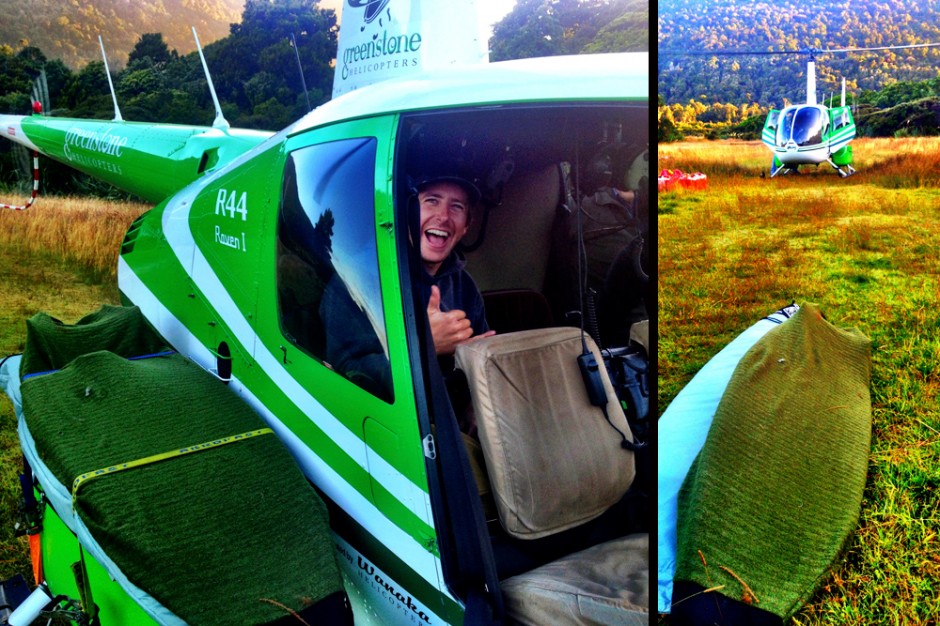 Helicopters have been synonymous with the wilds of New Zealand, and specifically Fiordland, for well over 50 years. The machine’s ability to fly in bad weather and land almost anywhere has made them indispensable tools in the region. Choppers even played a key role in the region's only economic boom when, from the late '60s until well into the '90s, red deer meat became a lucrative product in the European market. Over poached eggs and leftover venison early one morning, Warrick described, with characteristic Kiwi humor, how pilots would chase deer through the dense bush while a shooter, armed with a net gun, would stand out on the skid and shoot the net to ensnare the animal. If the net got the deer, the shooter would then jump from the skid onto the animal's back, trying to avoid being skewered by the antlers during the fall and subsequent wrestling and tying of the legs, before man and animal were air-lifted back to the safety of a clearing…dead serious. 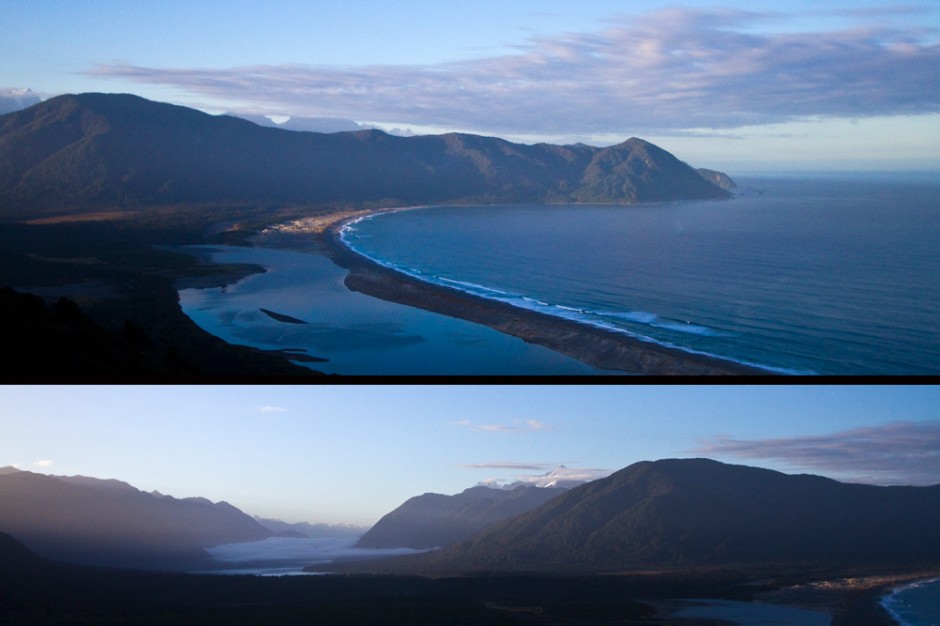 Our pilot Jeff Robinson is smiling and regaling us with humble tales of daring deeds during his time as a young pilot hunting deer with Warrick’s dad. Jeff’s reverential smile is one of a man who has lived his dreams and still loves what he does. “Let’s go find some waves for you boys,” comes over the intercom as we lift off into the sunrise. Cresting a small rise at the end of a large bay, my jaw drops as a fantasy scene is laid out in front of me. Snow-capped peaks line the horizon; the golden light of sunrise floods a lush river valley and a sapphire bay separated by untouched dunes of white sand. Where the lazy river meets the glassy ocean, a sandbar is sculpting the southwest swell lines into clean peaks. Jeff’s voice comes crackling over the intercom and shakes me from the disbelieving trance. “This look good to you boys?” 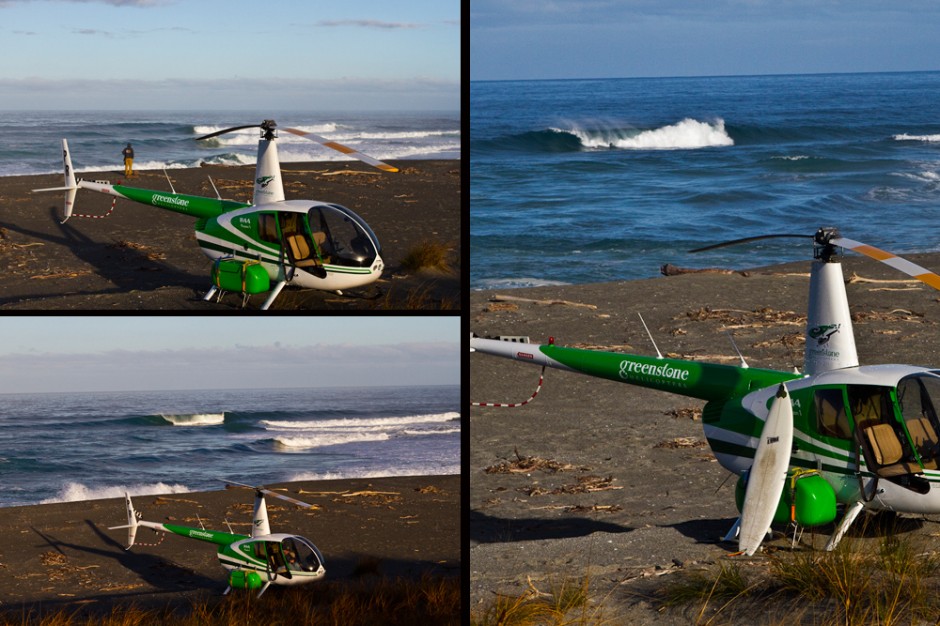 After landing on the beach, we stumble out of the chopper and give a victorious fist pump to the universe. I climb the nearest dune with my camera. The swarming sand flies quickly bring me back to reality and I scamper off the dune, swatting at the little black demons as I pull my wetsuit on and paddle out to join Kitt and the boys. 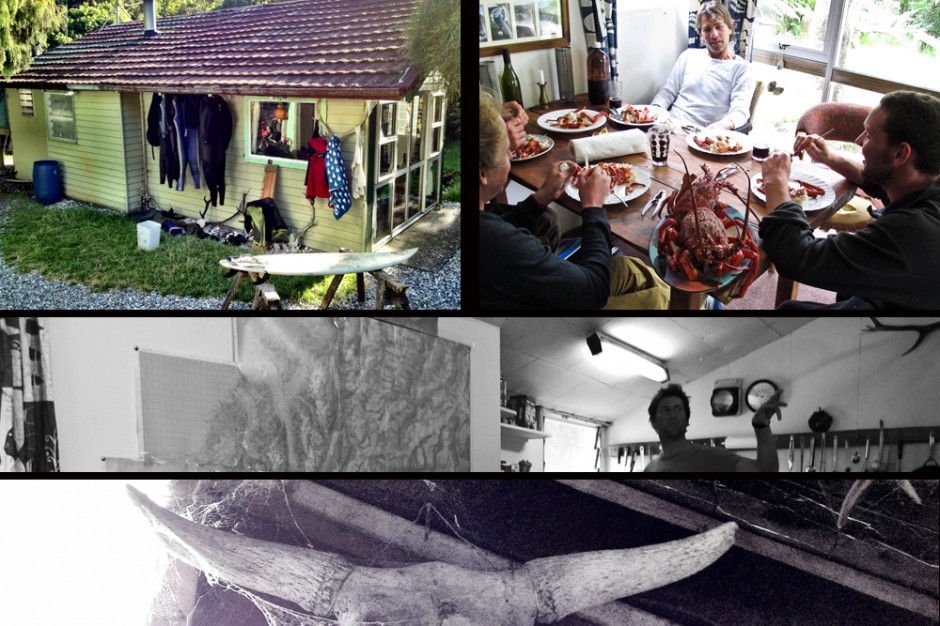 The main two-bedroom hut on the Mitchell property. Built by Graeme ‘Mitch’ Mitchell in 1968, the hut was constructed with local wood that he milled with a chainsaw. Mitch came south from Auckland in pursuit of the red deer meat that had become valuable in Europe. As evidence of countless meals of fresh venison, red deer skulls dot the walls and sit on the ground next to abalone shells and are often enlisted as drying racks for wetsuits and towels. Everything needed has to be flown in via small plane or helicopter, making the hut a study in the art of improvisation. Mitch’s son Warrick has taken to guiding small groups who come to Fiordland to hunt, fish, dive, and surf. 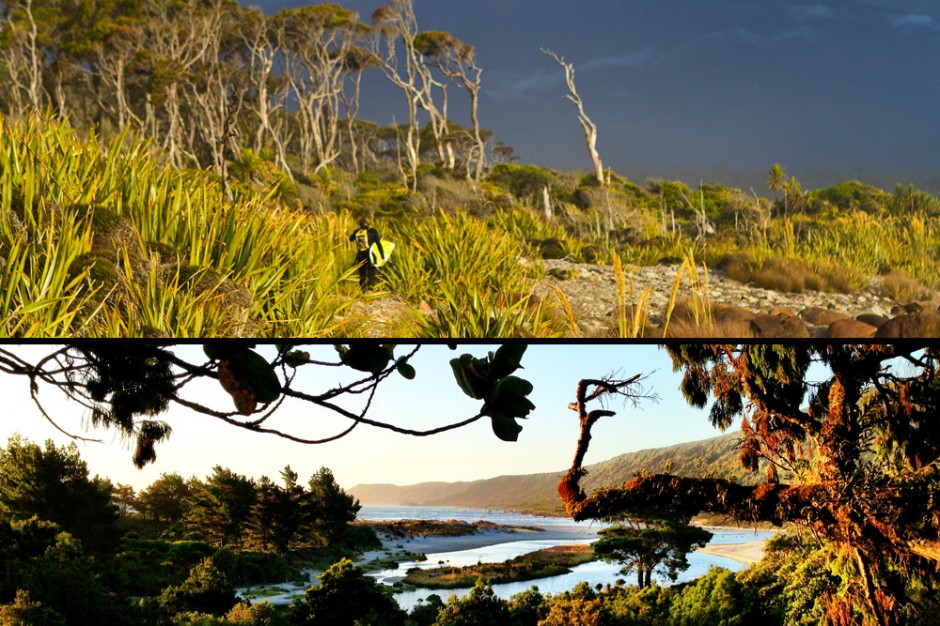 “It’s the challenge of this land and the reward for the efforts that always brings me back…nothing ever comes easy,” Warrick says with a humble laugh. We're sitting 40 feet up in the limbs of an ancient rimu tree behind the compound, watching the sunset over the bay. The Awarua River drifts languidly towards its confluence with the sea, and the cicadas’ hum is broken by the melodic call of a tui bird. Heavy, dark clouds gather on the horizon but, for the moment, the elements have relinquished their relentless barrage. It's a timeless view of a wild, unspoiled land that remains unchanged from when the Maori first came over the mountains in search of their sacred greenstone.