Camera technology has been advancing at such an accelerated rate recently that I’m continually amazed at the size and quality of the devices available — presently and most notably, my iPhone 5. The ability to produce high-quality photos and video at a moment’s notice, then store it all comfortably in my pocket, is fantastic, without even mentioning the fact that I can upload said photos to my social media accounts instantly. Even traveling out of the country, most hotels and hostels (some safe houses too) have wifi now. I can go out, shoot during the day, and upload in my room or on break in a coffeehouse.

I don’t rely on my iPhone to capture everything, but I love it for what it does. I use DSLRs as my primary shooters and the iPhone as a backup. On my journey to Aleppo this past month, I was able to shoot easily and quickly on my phone without drawing a lot of unwanted attention. This is an absolute necessity when I want something candid, or something covert. I hide my cell phone easily at checkpoints, and access it quickly for discreet snapshots during social moments. As I said before, perhaps the most useful aspect of smartphone photography is the ready access to social networking sites, a medium with which much of the world is already familiar.

I find myself wondering if the gravity of the situation in Syria, and the wrenching humanity of the people involved, could be more readily conveyed to the outside world in a truly impactful manner through increased use of this medium.

The below photos were all taken and edited on my iPhone 5 during a week embedded with a Free Syrian Army militia in Aleppo, Syria. Main programs used: Hipstamatic, Instagram, and Snapseed. 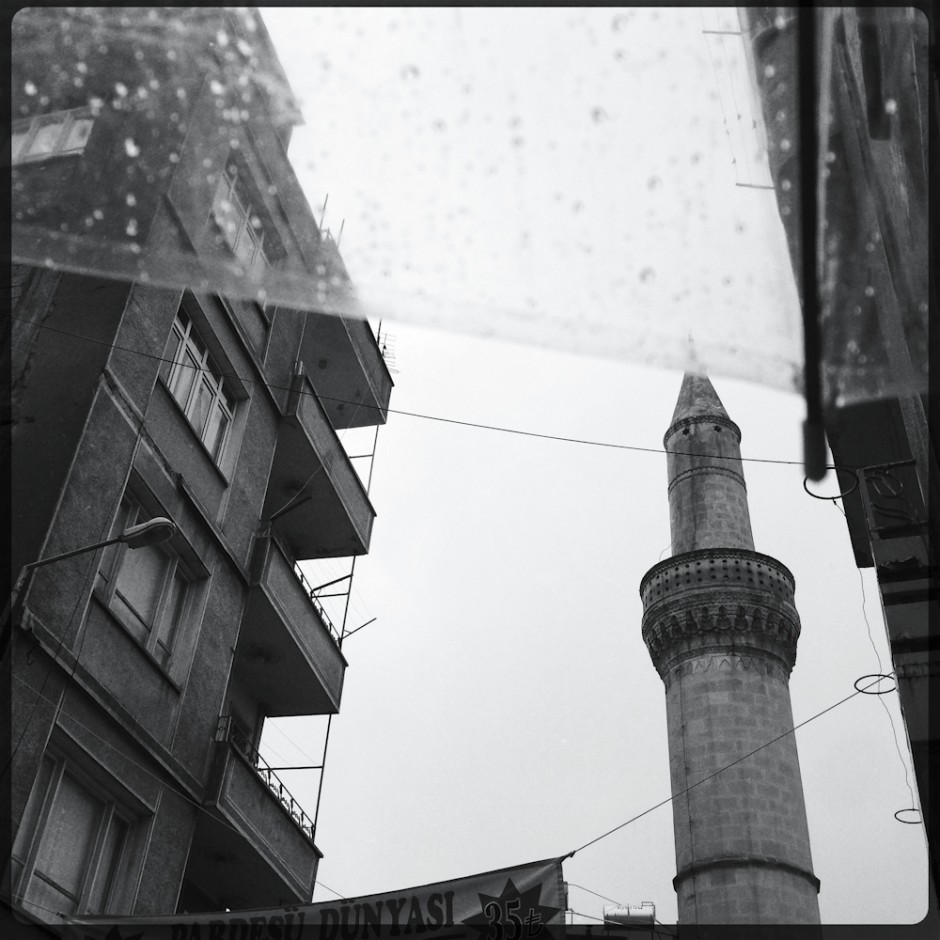 The Turkish border town of Kilis. Situated just across the northern border of Syria, it has become an escape for Syrians seeking shelter from the war. 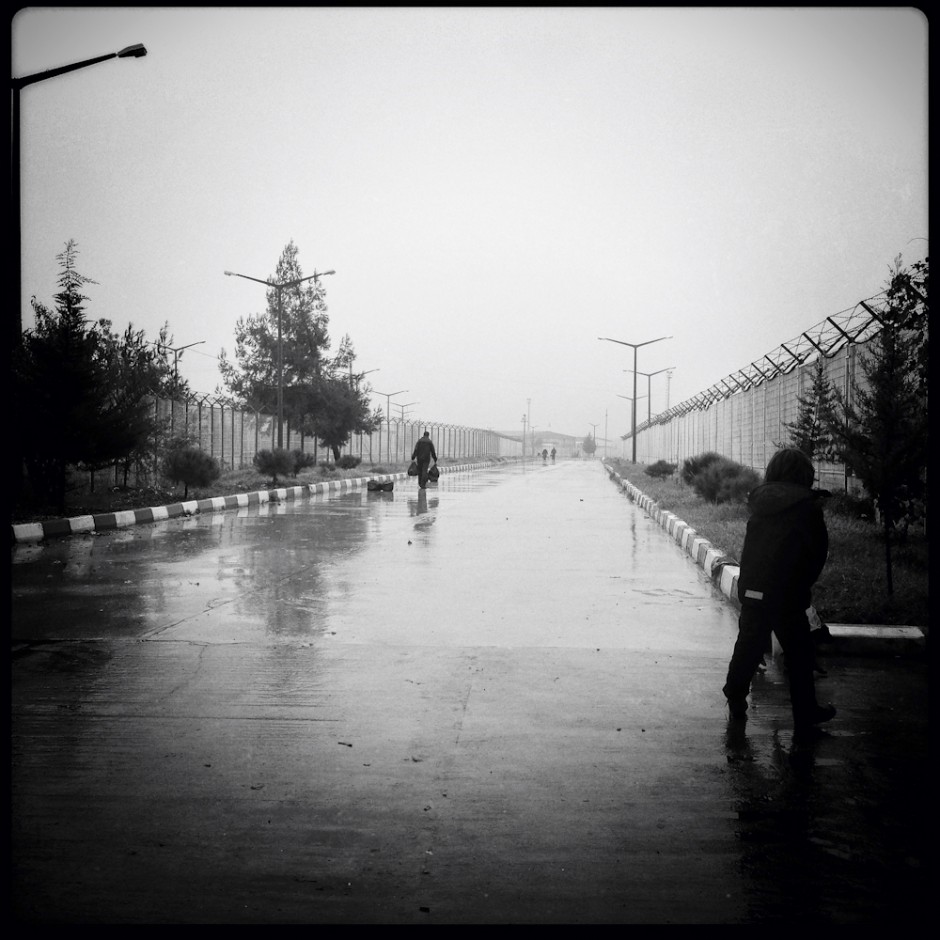 The start of the 3km stretch of road that makes up the Turkish-Syrian border crossing. The Turkish government has three checkpoints, and the Free Syrian Army has one. Fences, barbed wire, and minefields run alongside the road. Ambulances cross this point about every 15 minutes, shuttling the wounded to hospitals in Turkey. 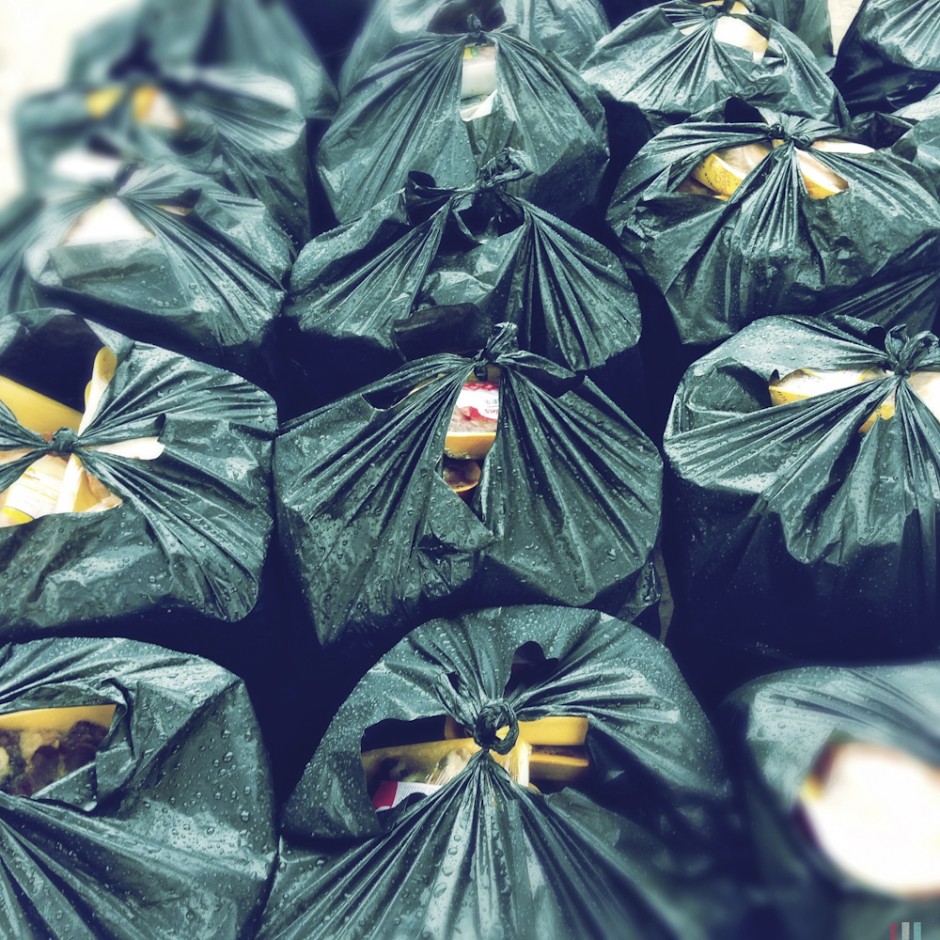 Bags of chicken crossing the Turkish border into Syria. The people of northern Syria are facing resource shortages as the war continues. Goods are transported daily, both legally and illegally, into Syria through Turkey. 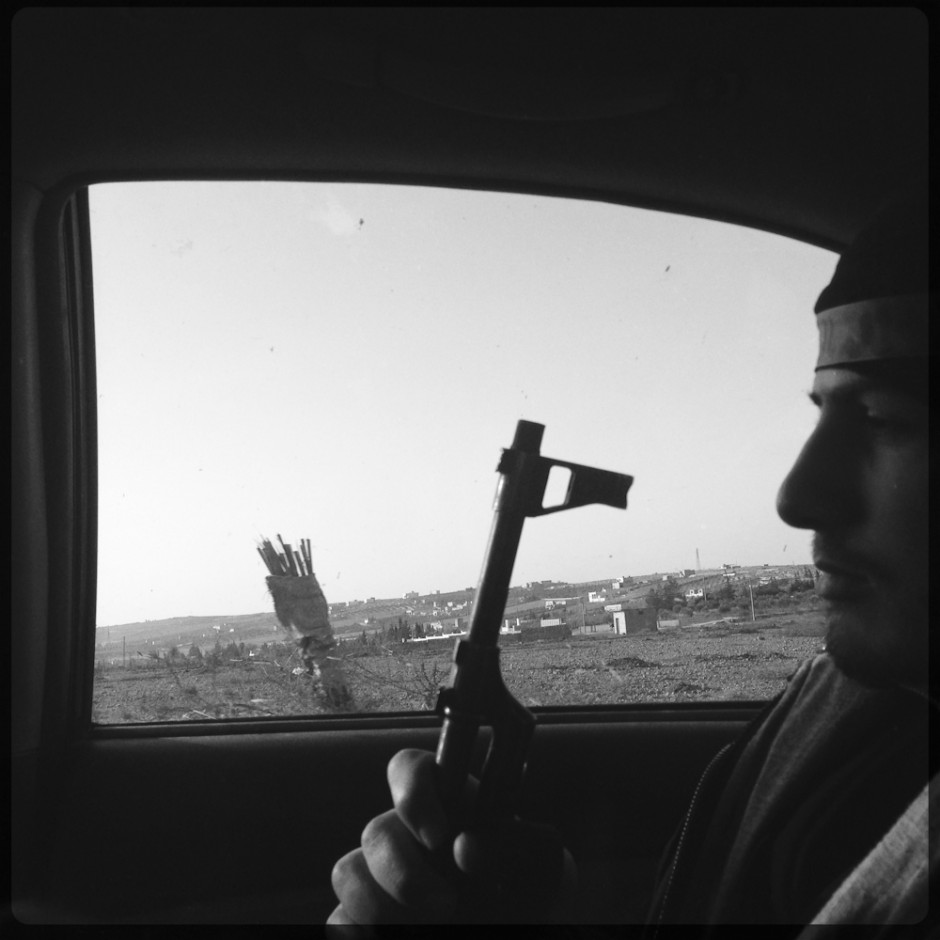 Doctor, 19, on the drive into Aleppo. The roads of northern Syria are dotted with small villages, mud houses, bread lines, fuel vendors, and the occasional smoke column belched from a recent shelling. 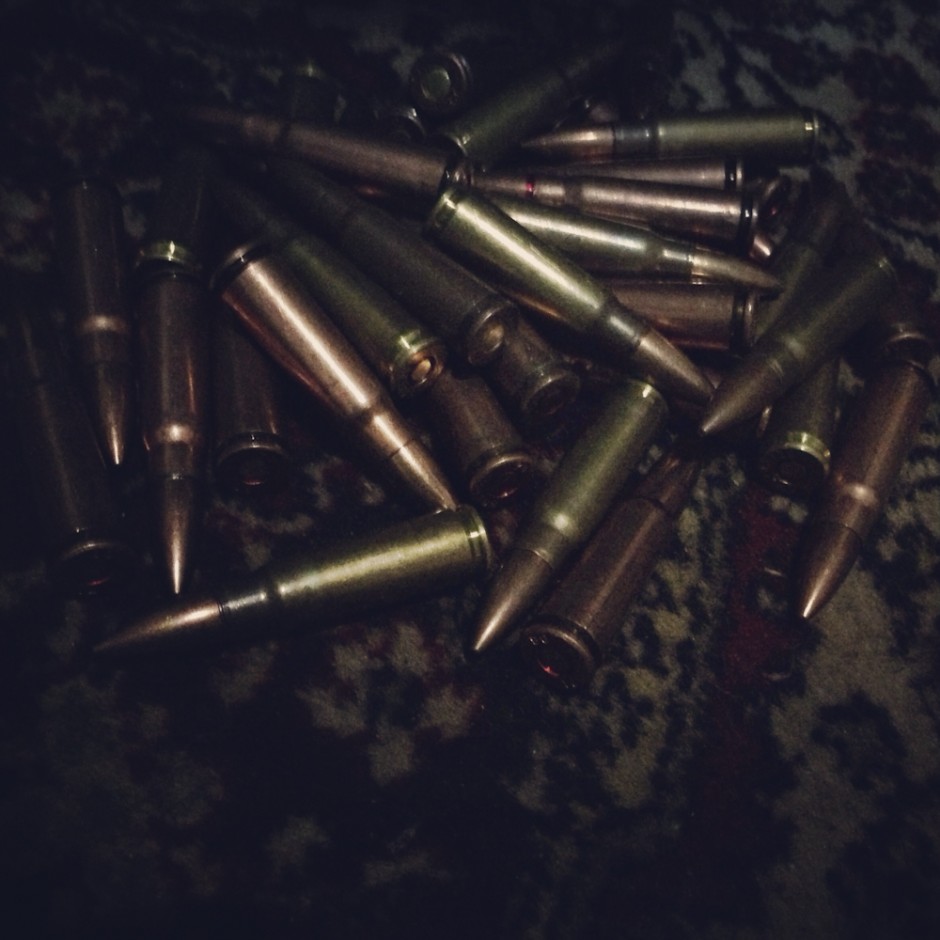 AK-47 ammunition lies on the carpet for counting. Without the international community's military support, the Free Syrian Army's ammunition supply is extremely limited. Successful advances are frequently thwarted and transformed into retreats due to low ammunition. 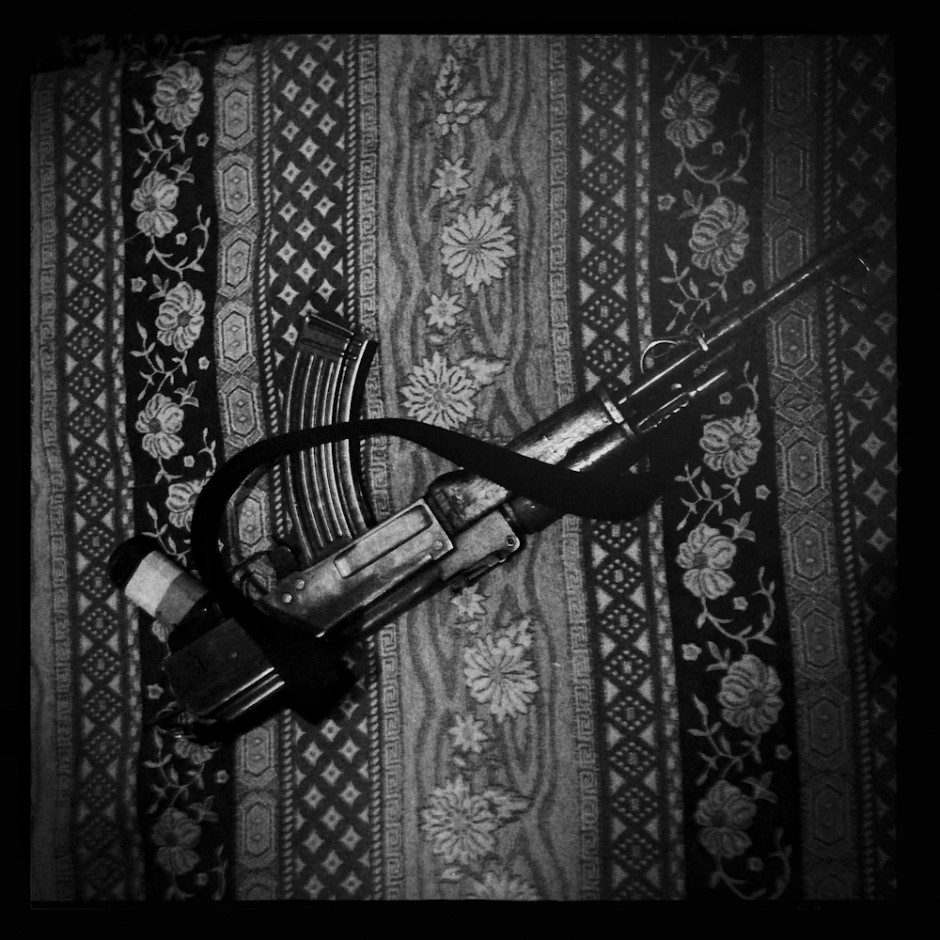 An AK-47 model Kalashnikov lies on a rug in a FSA-held room. One of the most widely used weapons in the world, this Soviet design has been relied on heavily by the FSA in their fight against the regime of Bashar al-Assad. 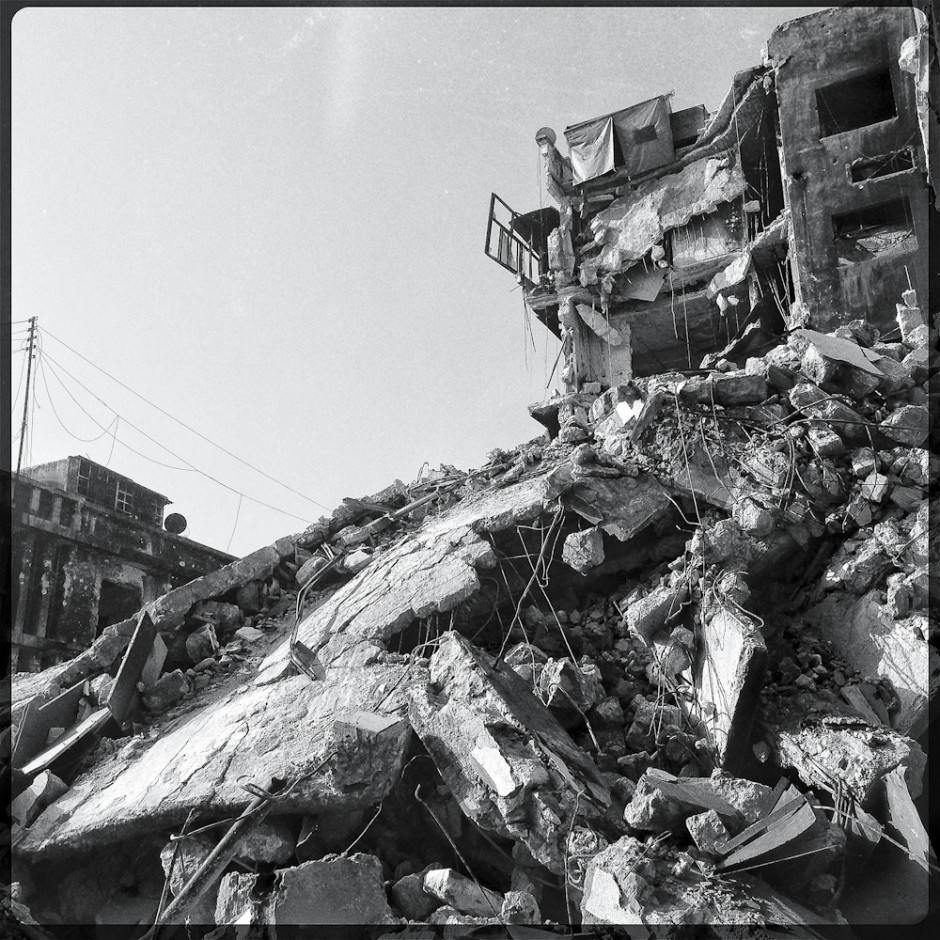 The wreckage of a building next to a main causeway through the Old City of Aleppo. Destroyed buildings punctuate the landscape of northern Syria and are commonplace in Aleppo, which has been the center of intense fighting for months. 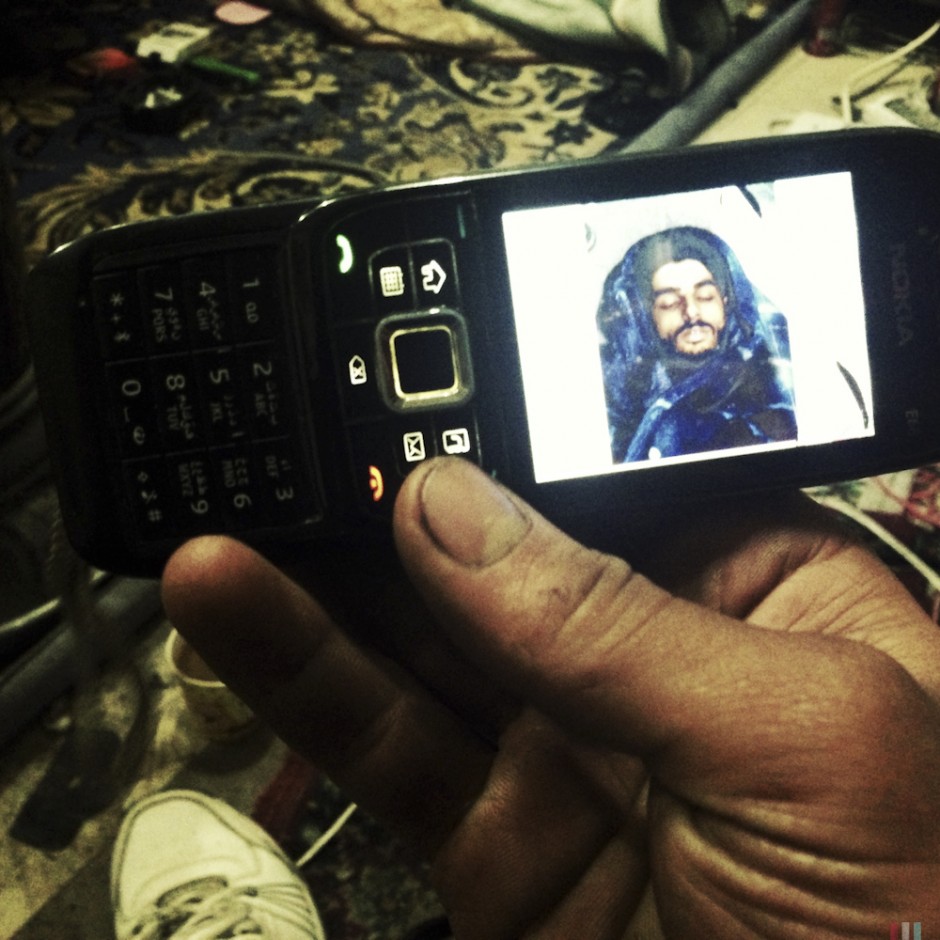 Ali, 18, a young FSA fighter, shows a photo of his dead brother. A large part of the war is waged via social media in the form of videos and photos, promptly posted to YouTube and Facebook. People everywhere have images like this on their phones ready to share. 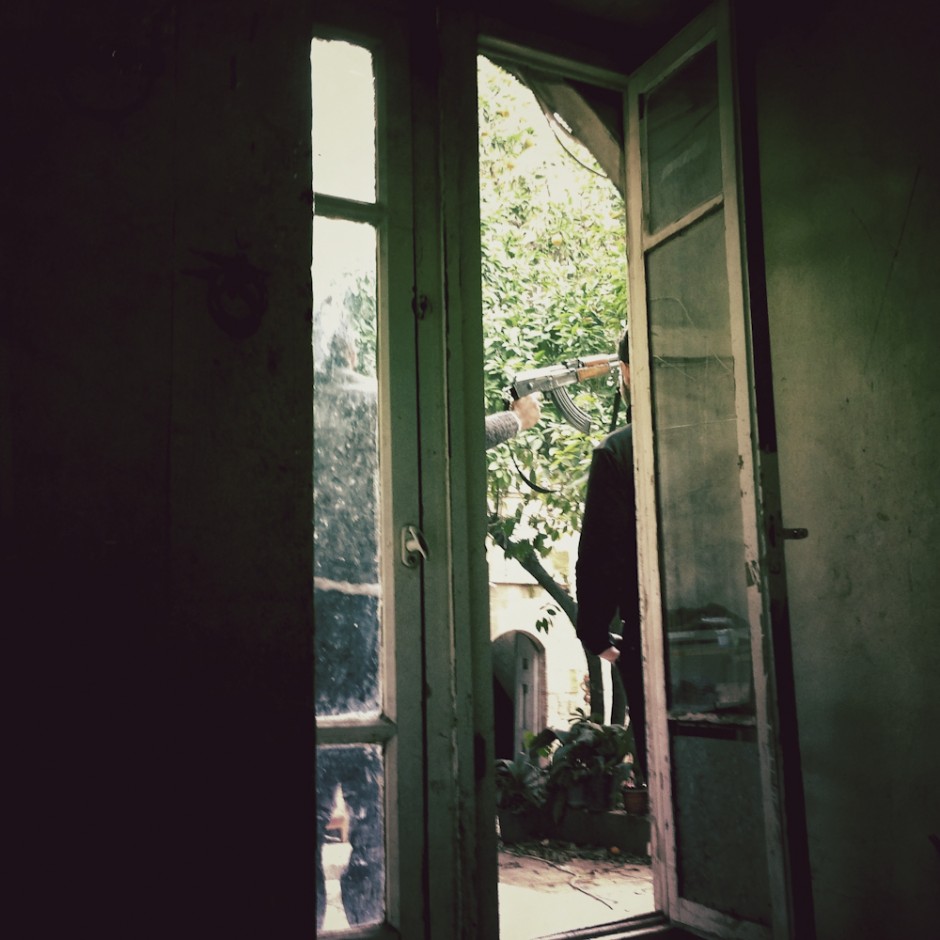 FSA fighters firing weapons in the courtyard of their house. Sleeping within 100 yards of two front lines, it was important for the militia to remain ready to fight at a moment's notice. Weapons were obsessively cleaned and kept close at all times. 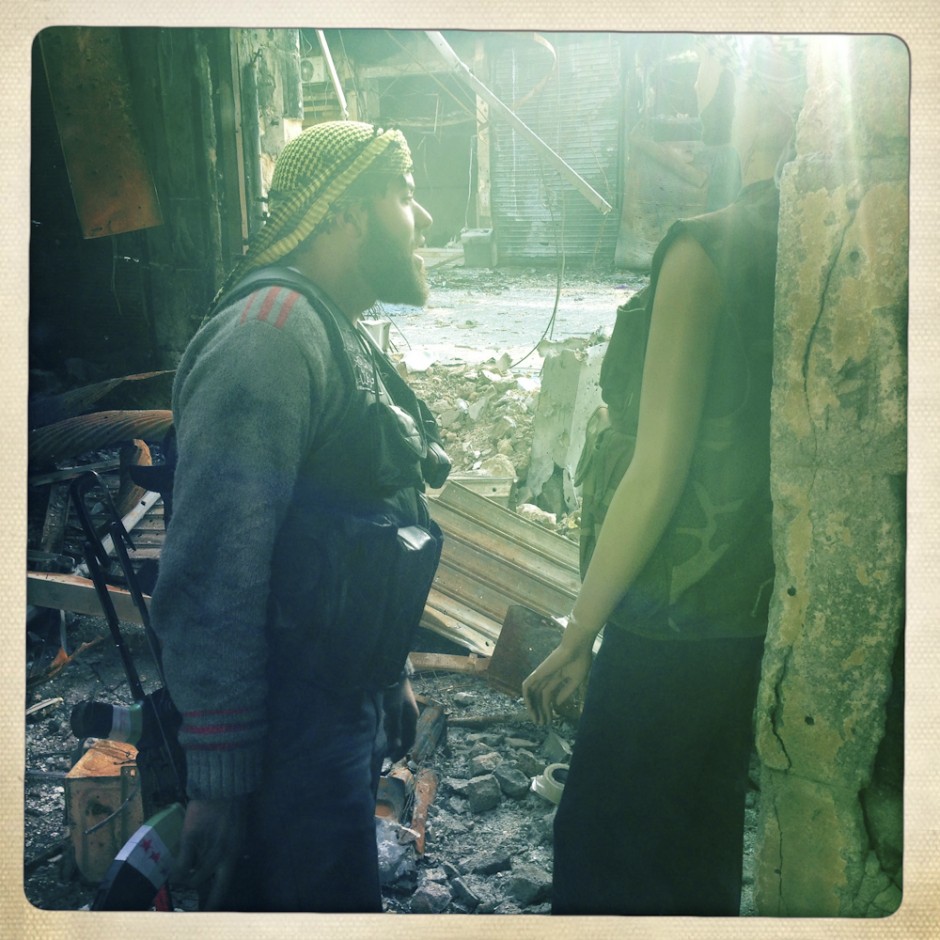 An FSA fighter leans out of his hiding spot to taunt Assad regime forces. Aleppo's urban fighting environment places enemy fighters so close they are often no more than a wall or empty street from one another. This proximity provides them with the opportunity to talk, and often yell, at each other. 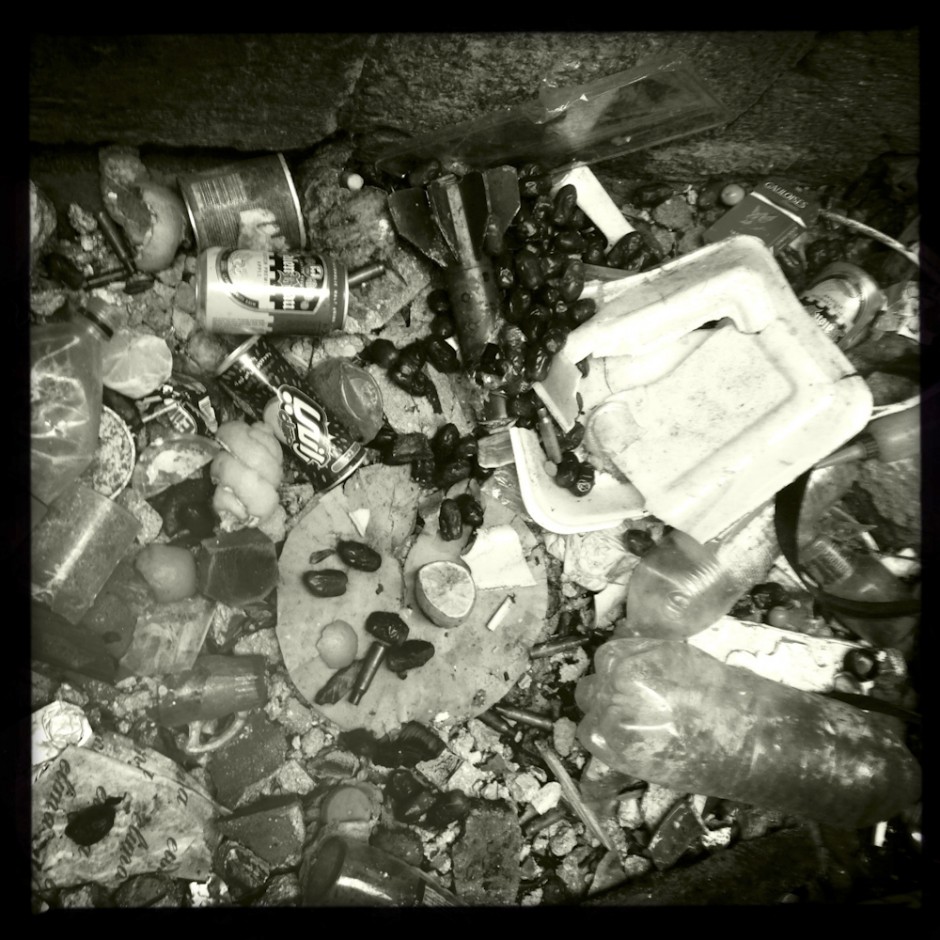 A mortar lies among bullet casings and other trash in the streets of Aleppo. Trash is everywhere in the city. There are no operational waste disposal services, so people throw what they have into the streets. 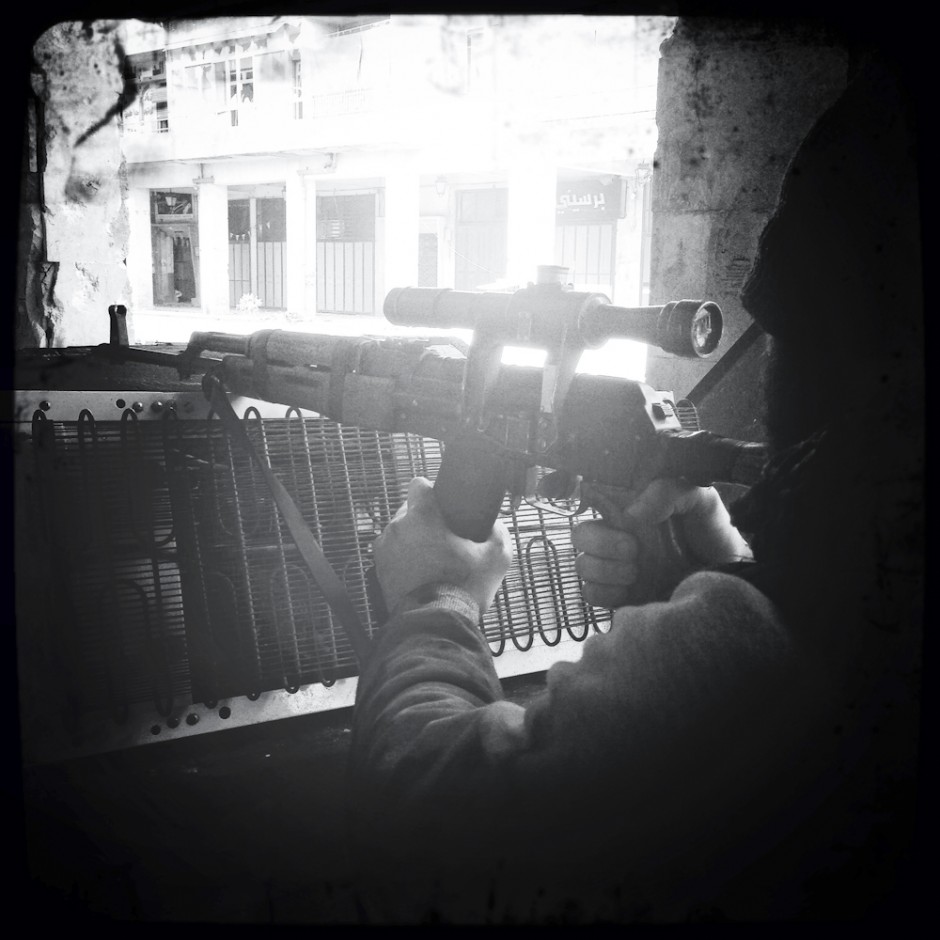 Becker takes aim down one of the many sniper alleys in Aleppo. Snipers from both sides of the war control great swaths of the city, from main streets to rooftops. 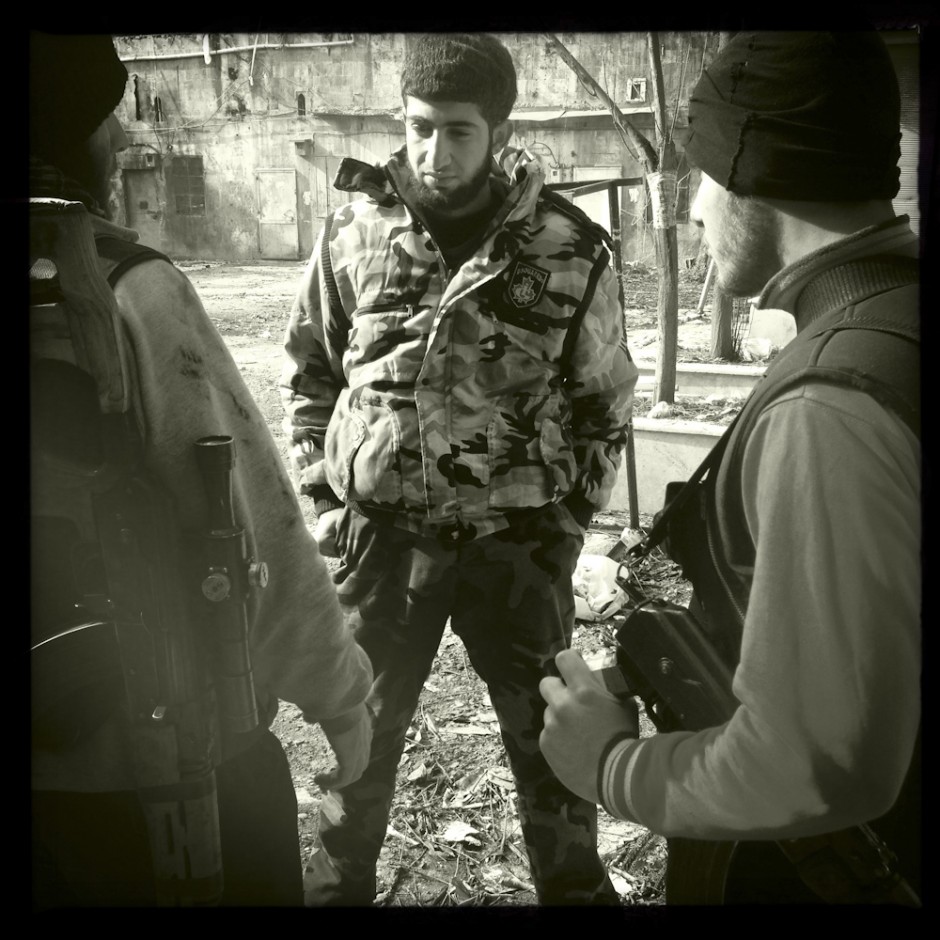 FSA fighters stop for a discussion during a patrol of the Old City of Aleppo. Militias are stationed throughout FSA-controlled sections of the city, each knowing its assigned area. Groups traveling to new areas always check with local forces about snipers and recent battles before continuing. 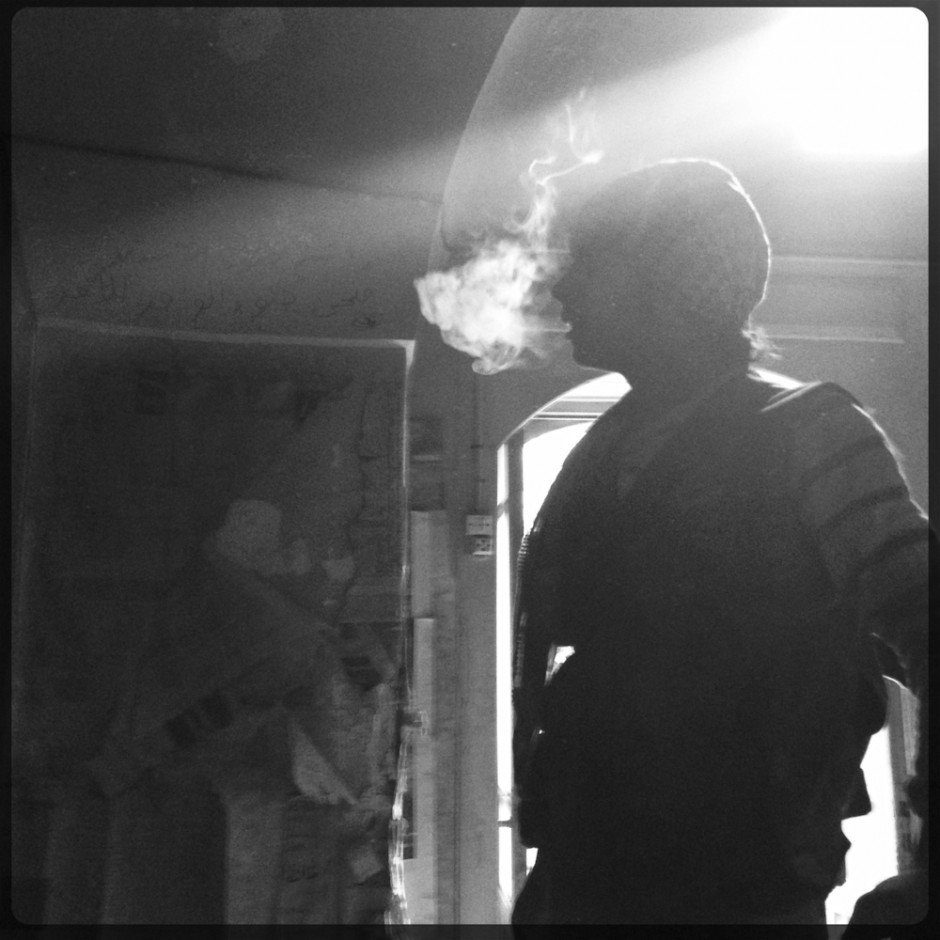 Ali, smoking a cigarette, stands in the doorway of a house after a grenade recently exploded in the courtyard. Fighting is in such close quarters that grenades and bombs are sometimes simply lobbed over walls, making it necessary to spend any downtime inside. 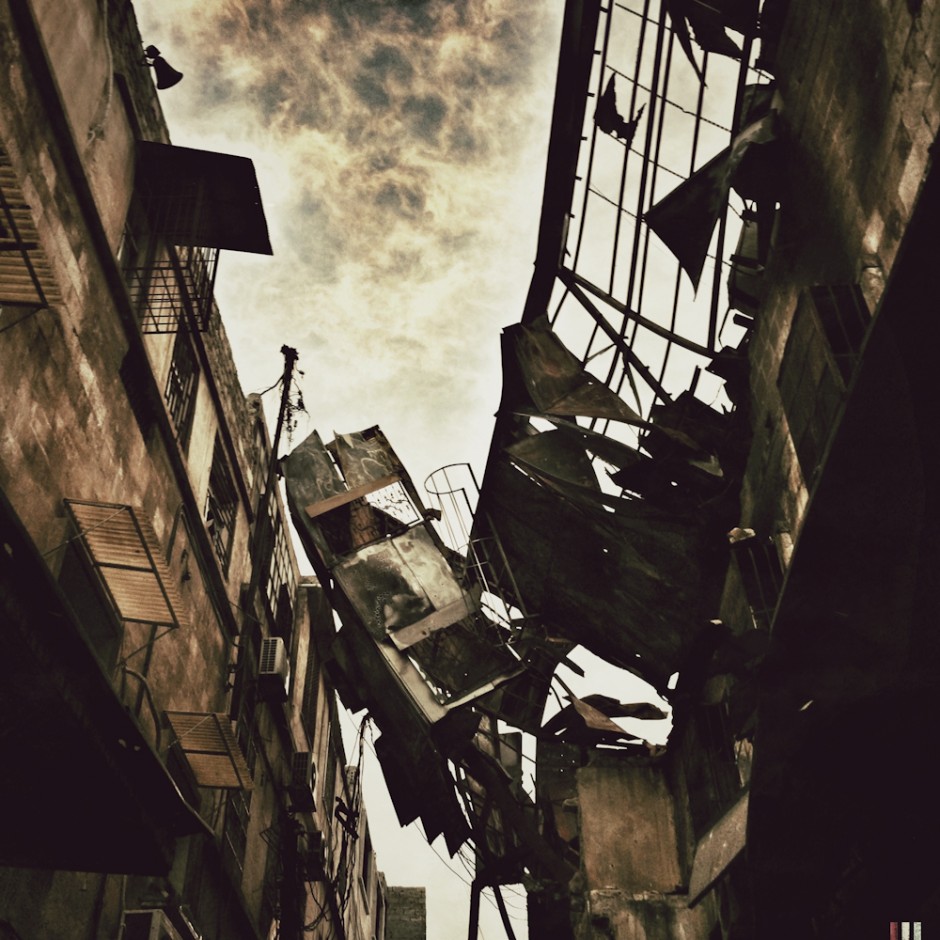 Two buildings hang dangerously over a street in Aleppo. The battles have left buildings partially destroyed and near collapse. With no time or resources to fix or demolish them, the buildings are left as precarious hazards. 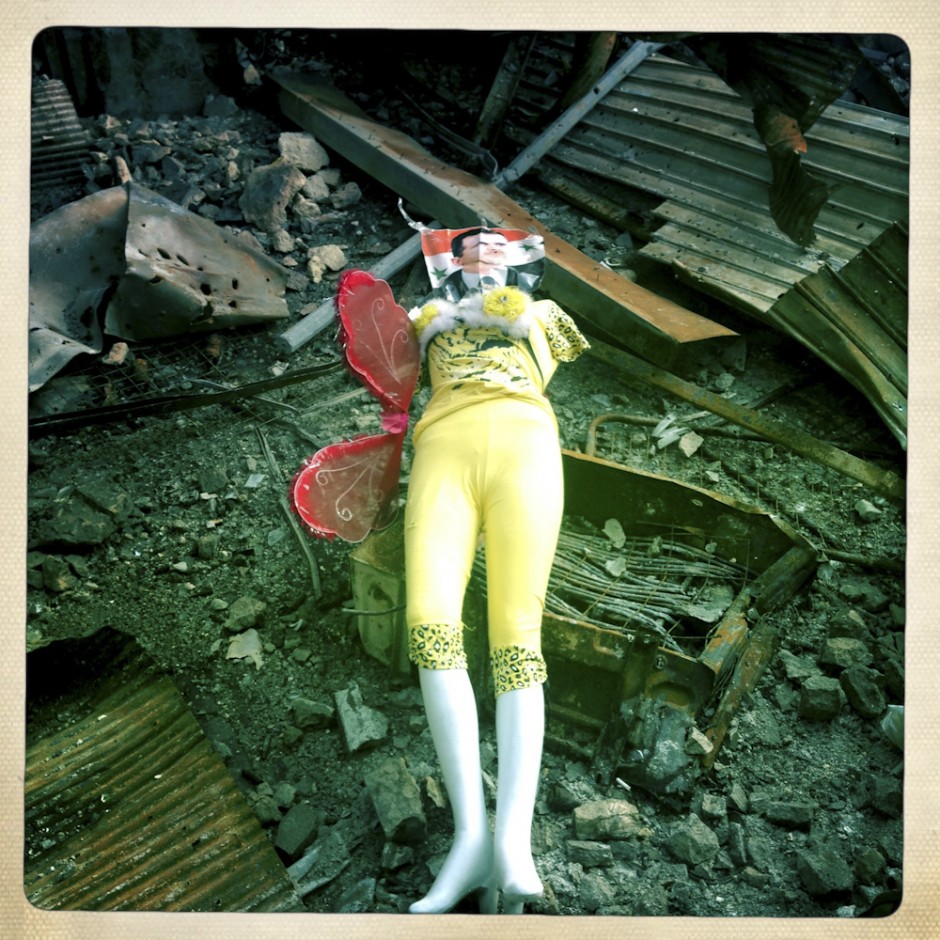 A doll made to resemble Bashar Assad lies amid the rubble of a burnt building. Rebel fighters used this mannequin and ones like it to draw sniper fire and lift the spirits of their troops. 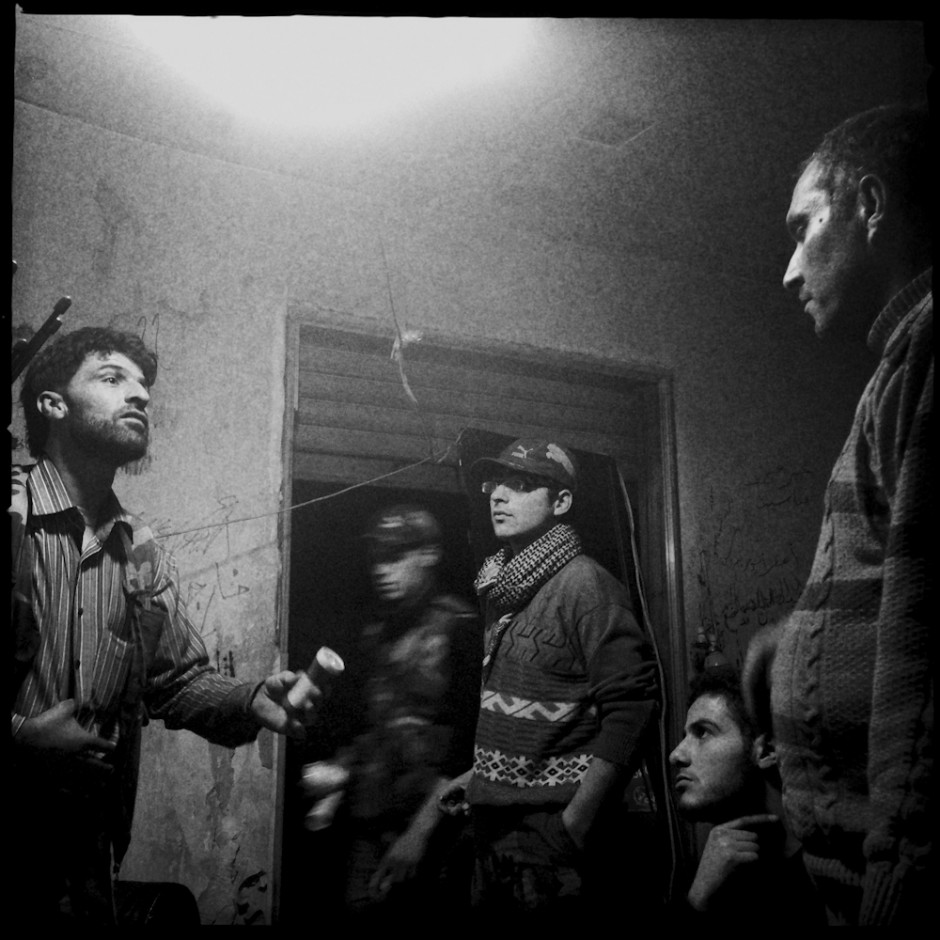 Two older FSA fighters (one Kurdish, another Sunni) have an argument amongst a group of young fighters. Fighting within the FSA is common and explainable in light of the conditions under which they live and battle. 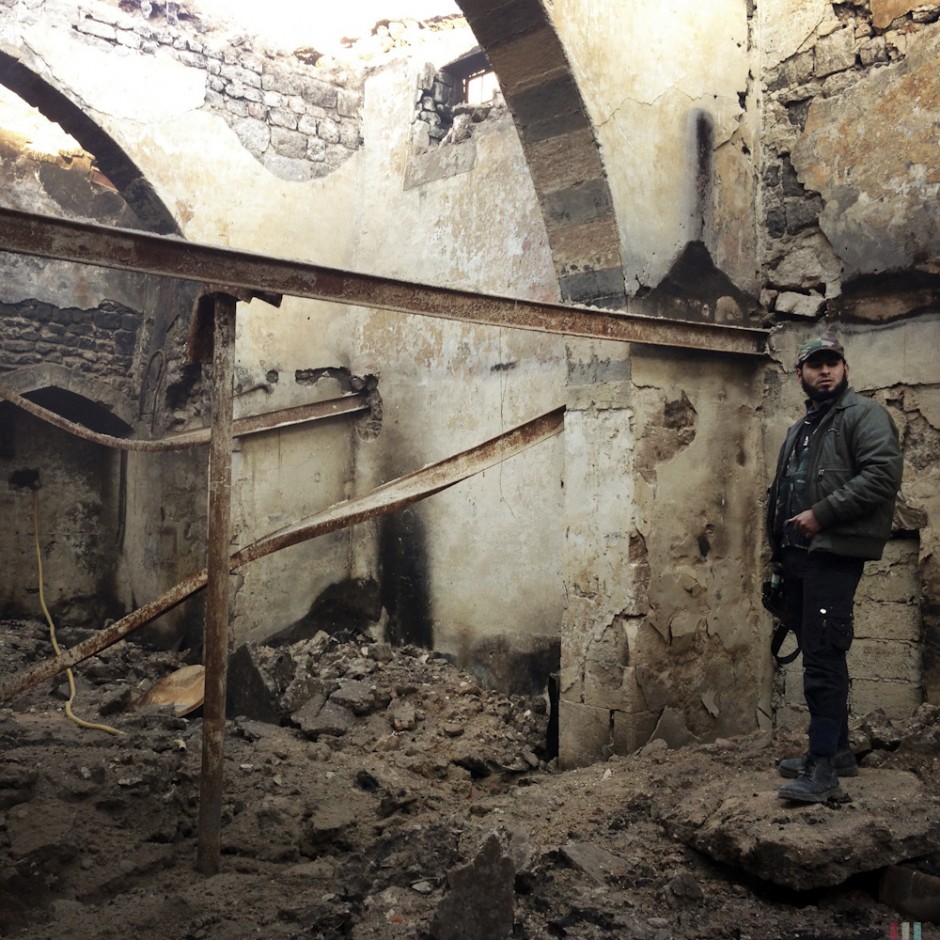 Muhammed stands in the remains of a destroyed building in Aleppo. Many of the rebel fighters are not native to the city and arrived to find a place they hardly knew laid to waste by the war. 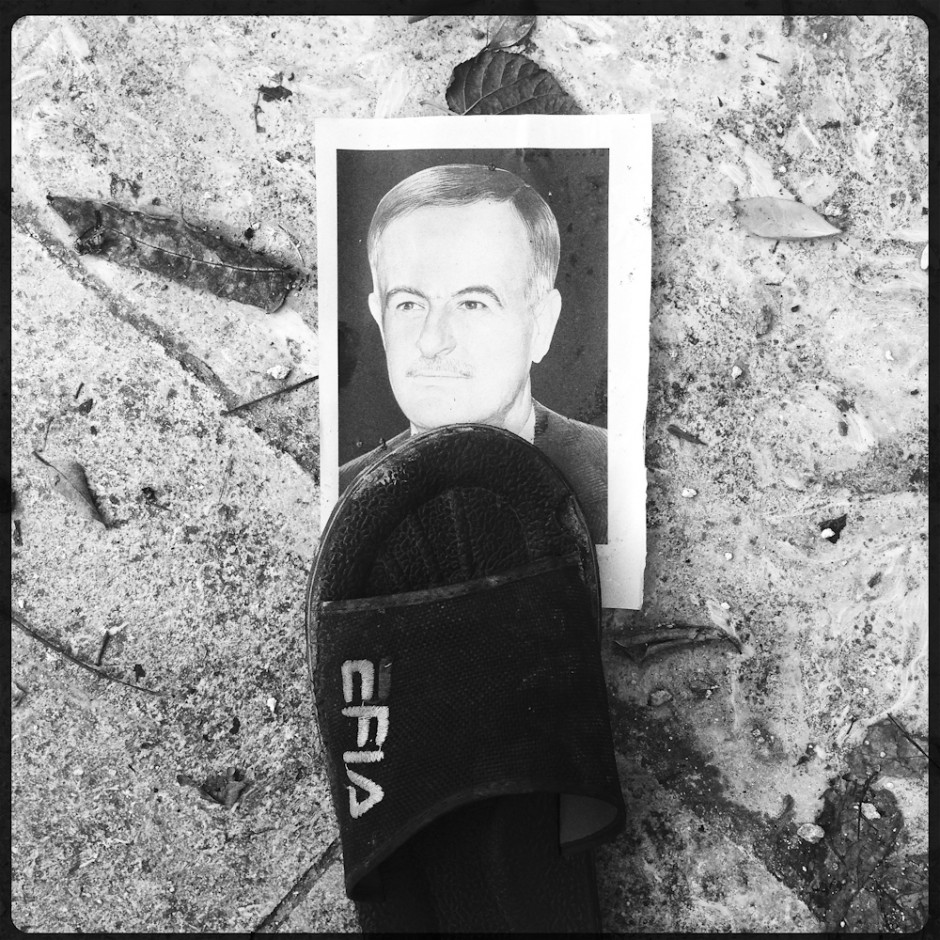 An FSA member's sandal sits atop a picture of Syria's former leader Hafez al-Assad. Placing shoes or sandals near the face is considered a sign of great disrespect in Middle Eastern cultures. Many of the fighters in the FSA said they consider Hafez al-Assad as bad as his son, current president of Syria, Bashar al-Assad. 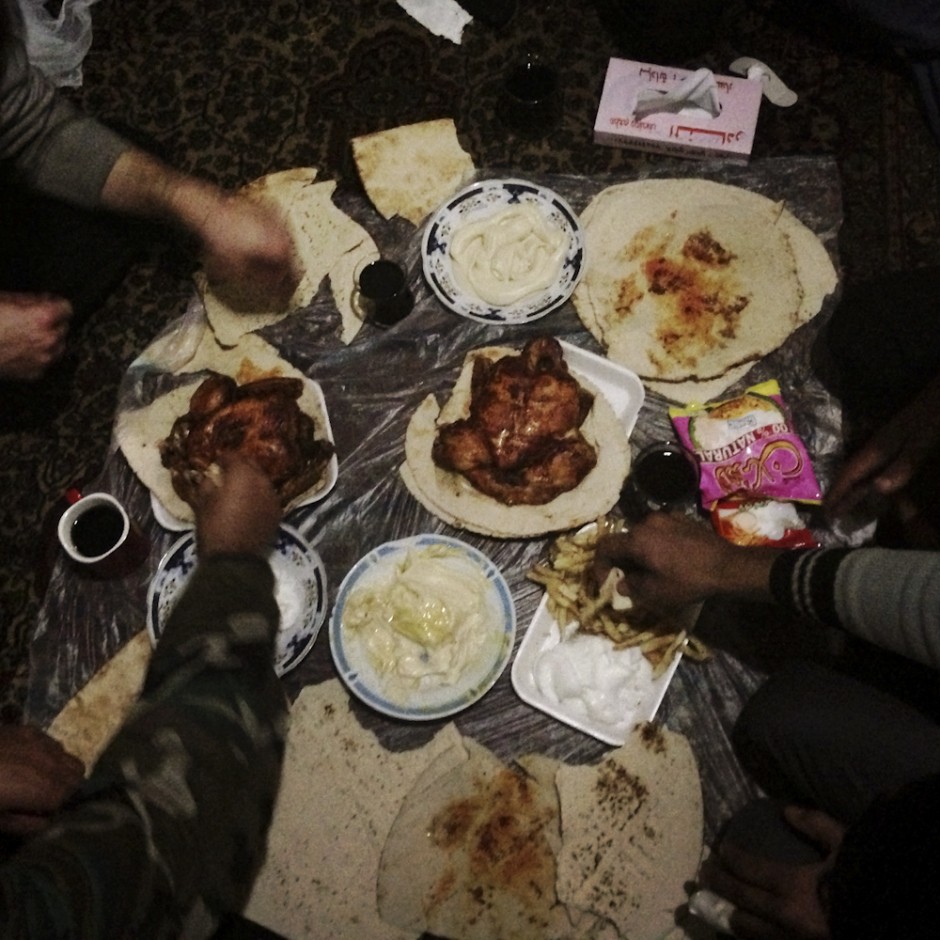 A typical meal with the FSA. Meals eaten by fighters in Aleppo often consist of high-starch foods like bread and fries. Meals in Syrian culture are eaten family style, and food is grasped with a piece of bread or directly by the hand. 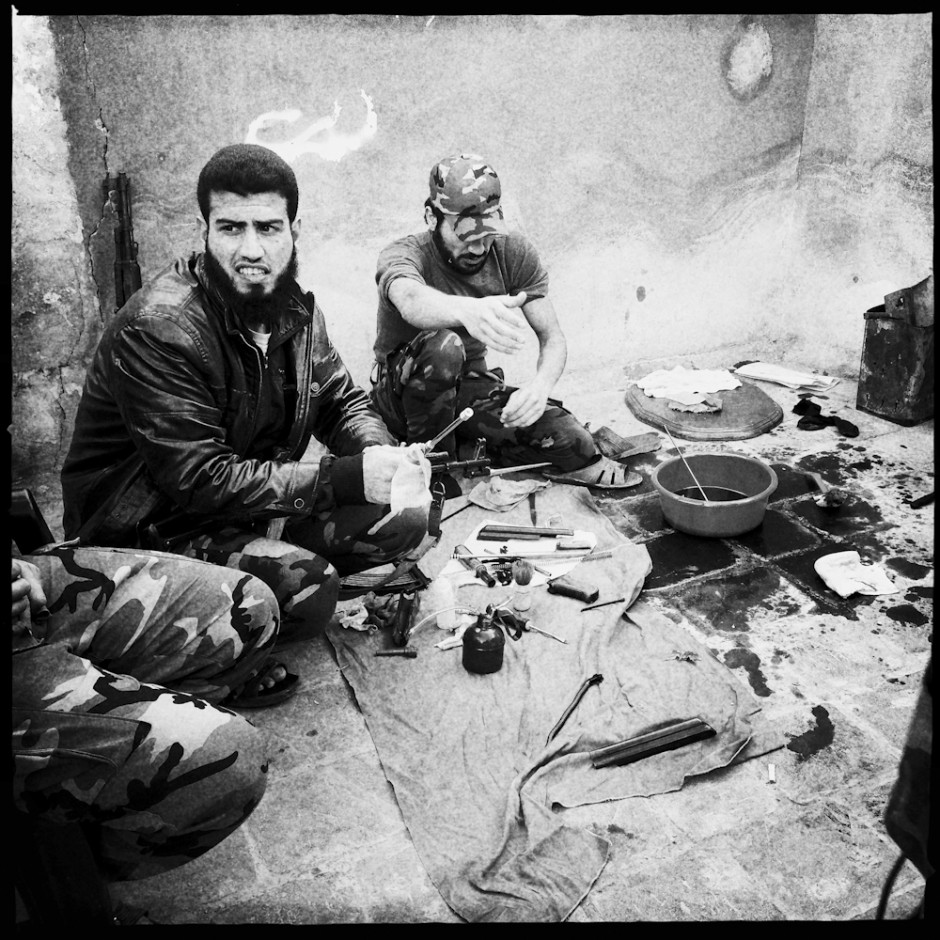 FSA fighters take a break from the front lines to clean their weapons. 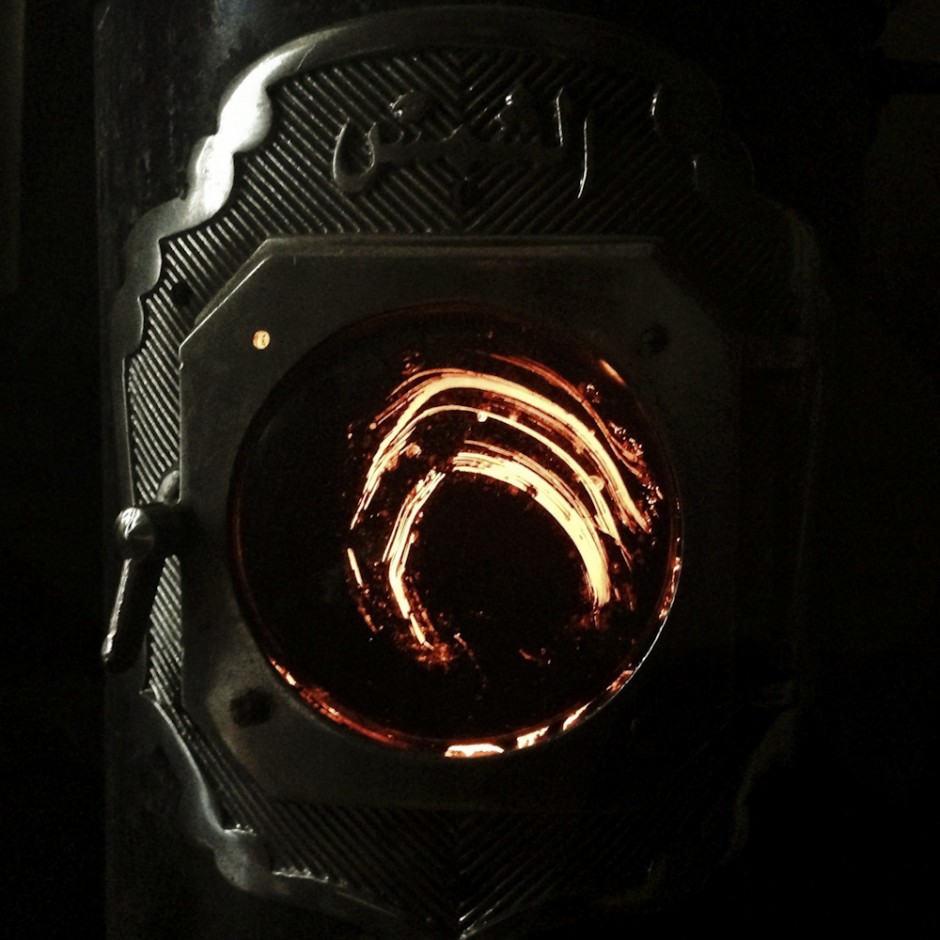 The soot-covered face of a petrol heater in an FSA safe room. Temperatures drop belong freezing during December in the city of Aleppo, and staying warm is hard for fighters and civilians. Trees across the city have been cut and furniture destroyed to use as firewood in attempts to make it through the winter. 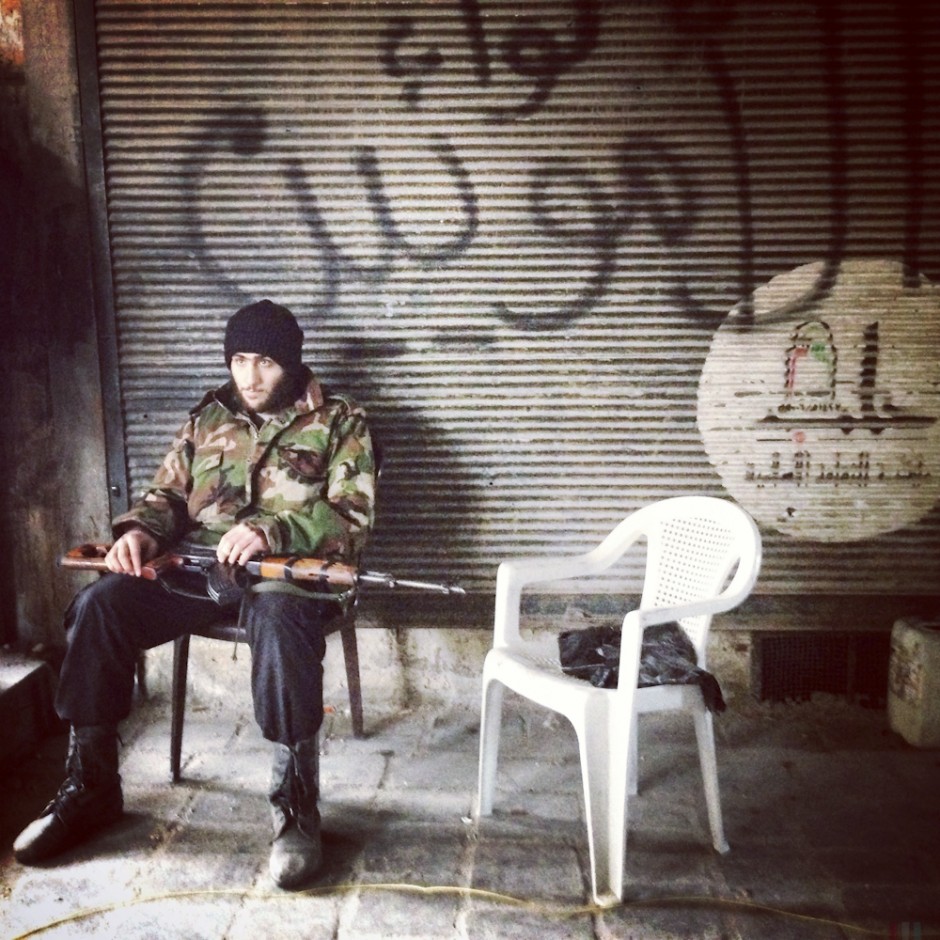 Becker, 19, waiting for clearance to cross a sniper alley. 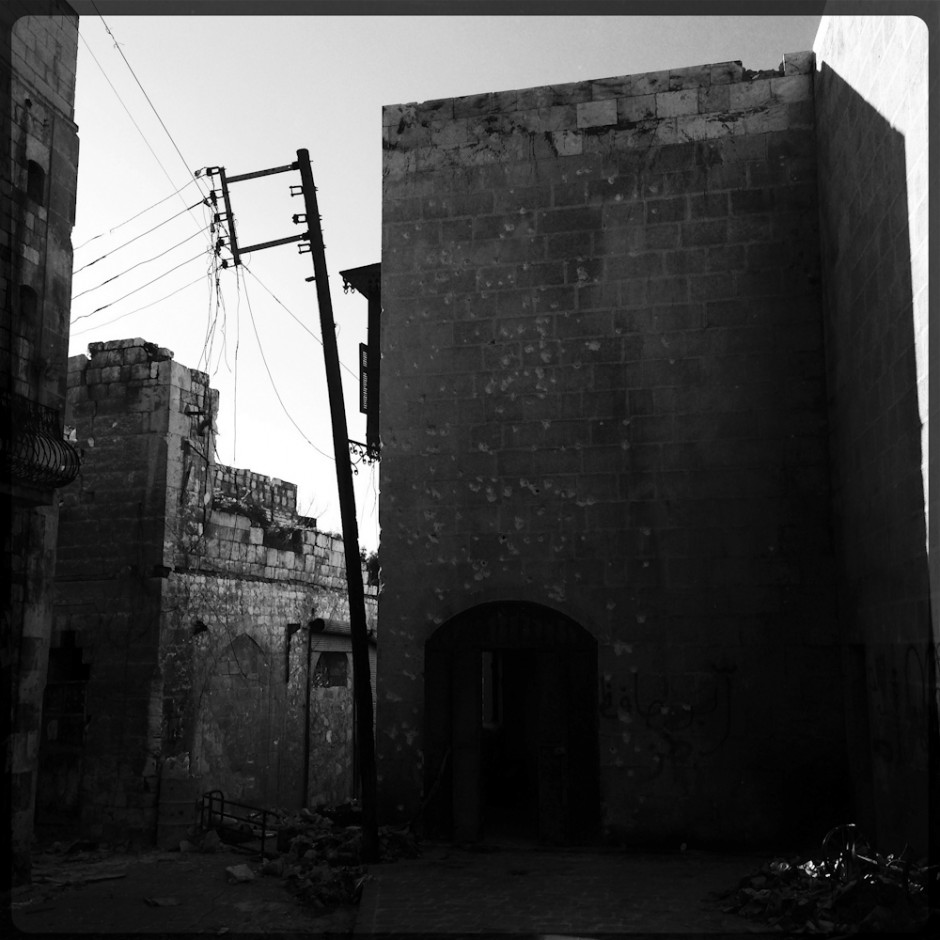 Bullet holes and soot cover nearly everything in the Old City of Aleppo. 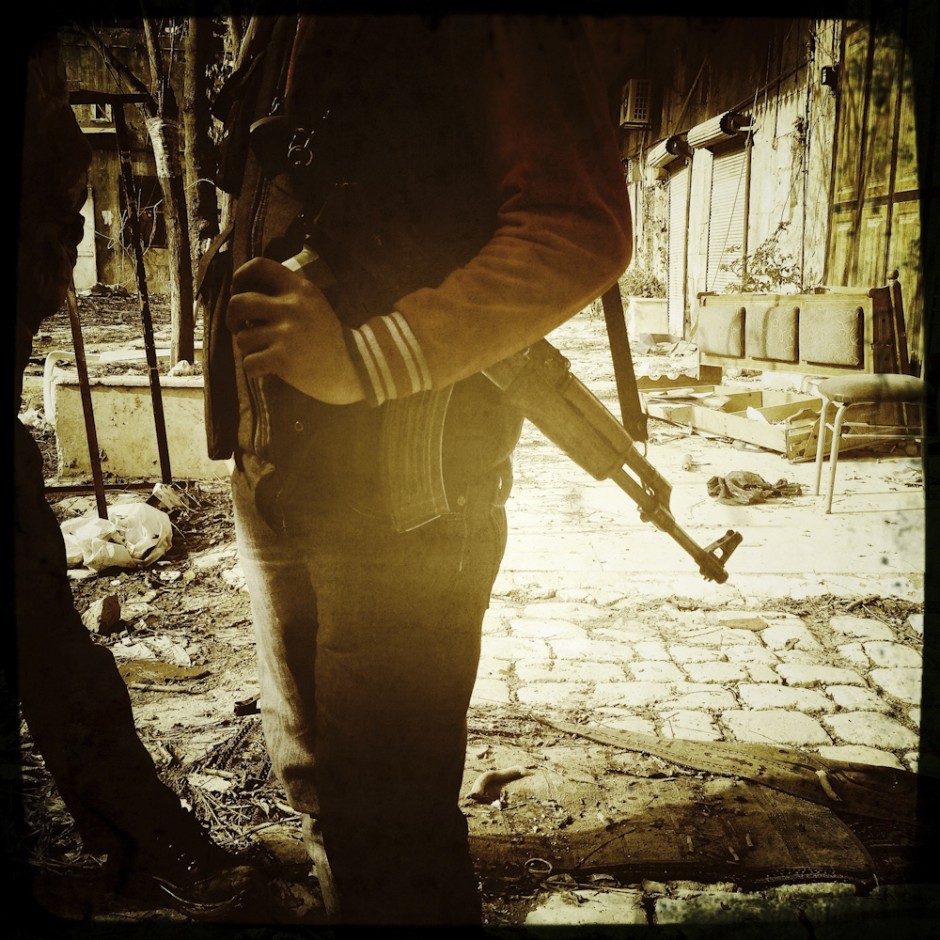 Doctor, 19 and a former student of computer technology, carries his weapon on a shoulder strap during patrols around Aleppo. 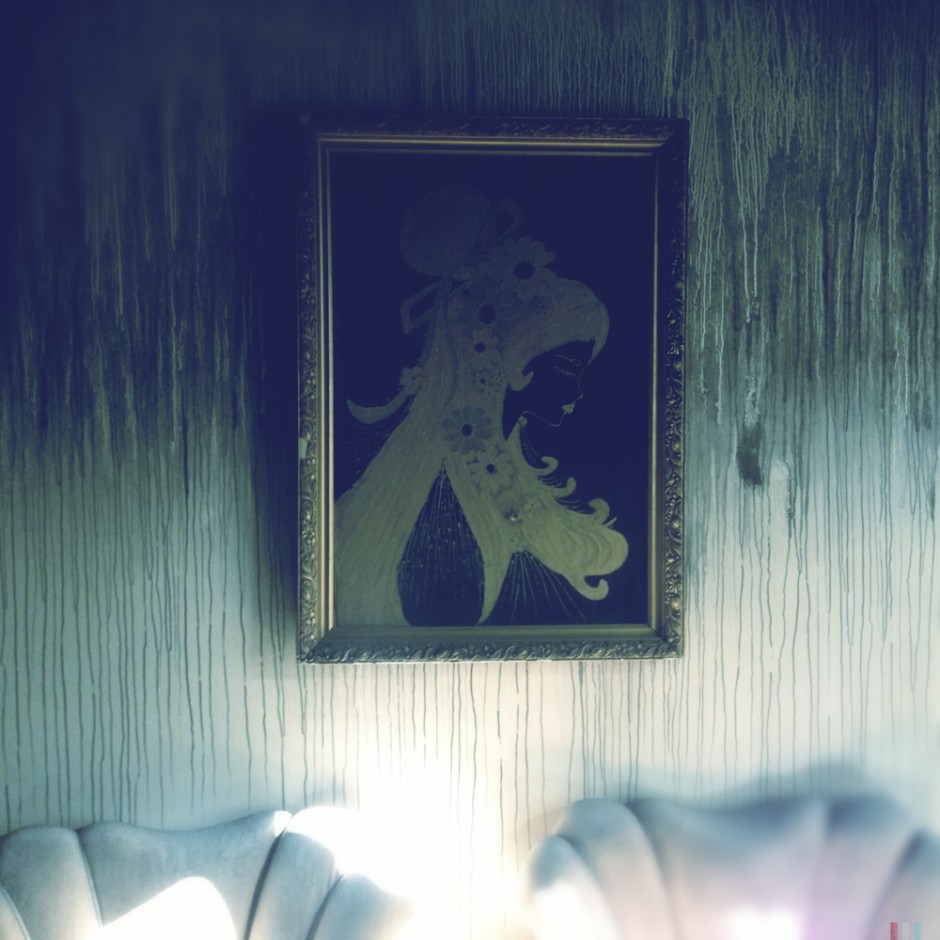 The stains of war 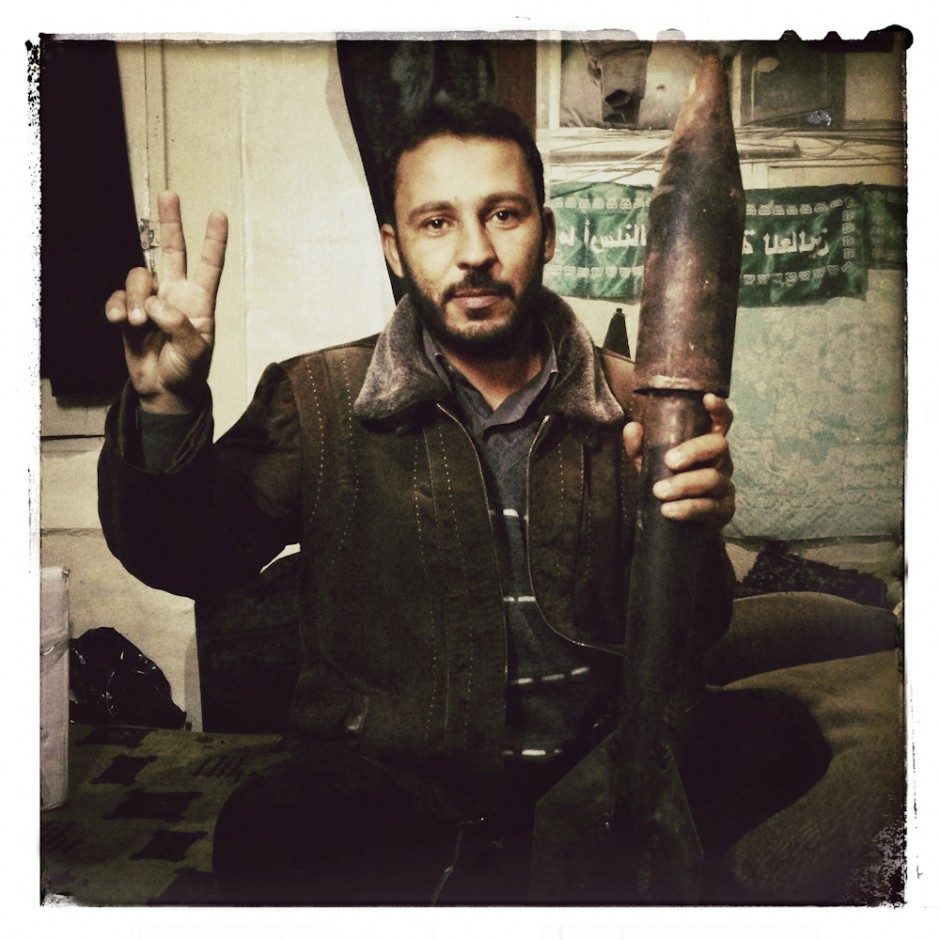 Saed poses with a homemade missile. Since the FSA has been unable to gain international military assistance, they've had to develop their own weapons. Unfortunately the homemade weapons are prone to malfunction, and related injuries are common. 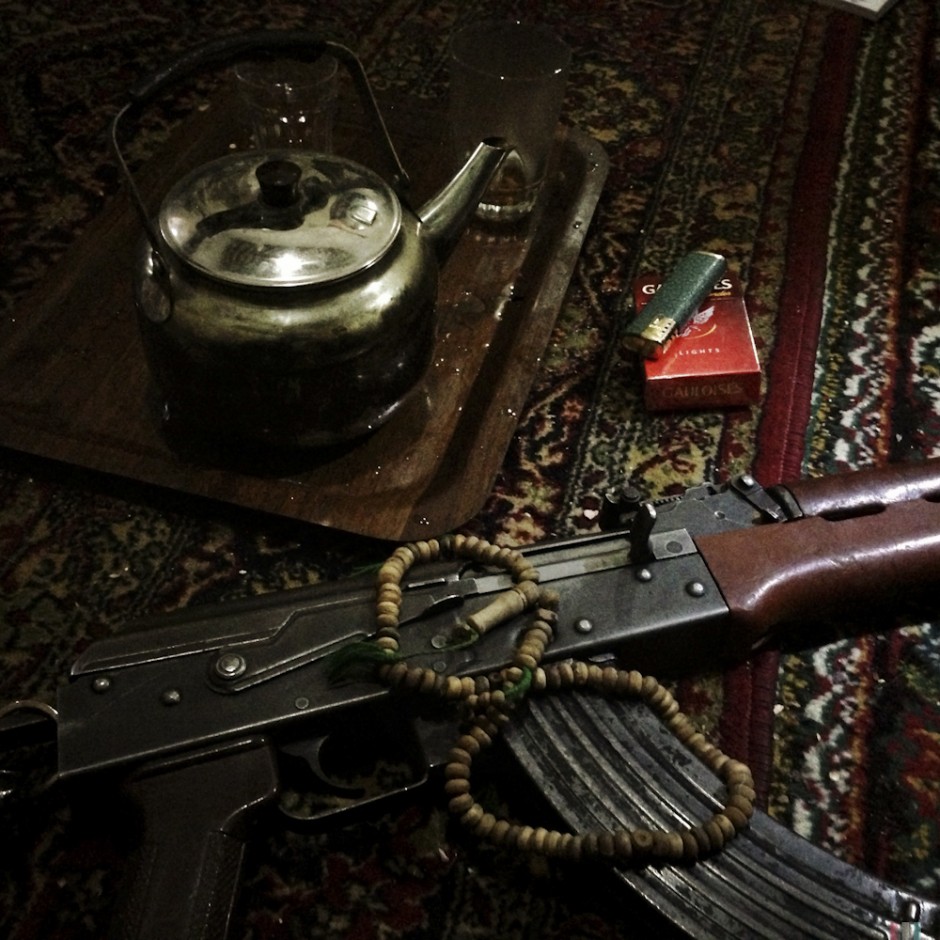 A summation of the front lines of Aleppo. The men of the FSA are constantly drinking tea, smoking cigarettes, and fighting. Welcome to War. Welcome to Aleppo.

Tagged
News Ambassadors
What did you think of this story?
Meh
Good
Awesome
✖
travelstoke
Download the mobile app
stoked by