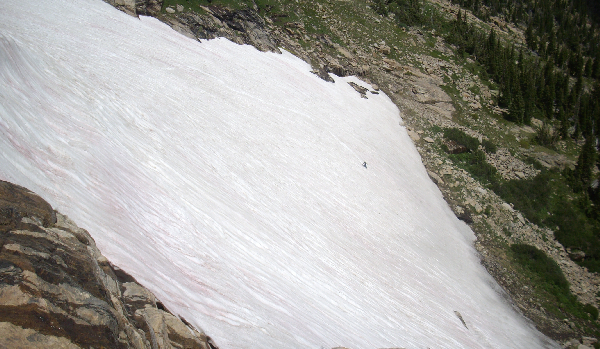 The author, snowboarding a late-season snowfield in Rocky Mountain National Park. Detail below.

Just blew out the candles and writing now by headlamp. Settling in for another night in the dharma shack, the second since the bear ripped the door off the trailer. The bear left this stink like he’d pissed on the floor. I asked Lau if she thought about revenge. “You mean like killing the bear?” she said. “No.”

Earlier I’d driven the truck down the hill with the generator and shop-vac in the back. The sun was setting. I vacuumed the shit out of the place–dog food and oats cycloning up the hose–cursing and stomping around in the bear-stink, the trailer rocking, trying to find every last oat with my headlamp on as it’s quickly turning to night outside.

The Great Wave by Hokusai.

I was so pissed that really there was no calming wind until tonight, a day later, after we’ve moved up here to the shack and now all lie in bed – Layla here nursing with Mamá — where I found this journal (the “Dharma Shack Chronicles”) and started writing.

I’ve always loved the picture on the front cover (“The Great Wave” by Hokusai), the fishermen huddled along the gunwales. Huge waves and spray and Mt. Fuji in the background. If you look at it hard enough you can almost hear it.

Why stay pissed about the bear? Lightning keeps flashing in the East [Denver must be getting hammered] and there are forces that will always be stronger than us. All you can do is bow.

Six days later and certain things feel settled. A quick trip to Rocky Mountain National Park. Lau + Layla + Tio Will + me. I hiked the board into a high-hanging snowfield on the Northeastern face of Sundance Mtn. 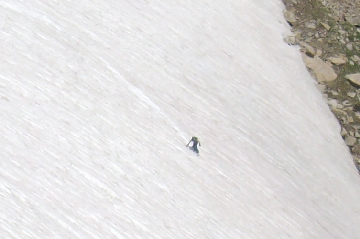 Snow was runnelled and rotten but still a fun run. Will took pictures and I look tiny on the mountainside, which is a good way to feel.

Lau and Layla leave the day after tomorrow, on to Florida where I’ll join in another week. Lau was all broken down about the separation + time alone with my parents but tonight we seemed strong and peaceful.

I think sometimes you just wear all the fighting out of yourself. Whatever it is or was we had a good night tonight visiting our friends in Boulder. Everyone just on their paths and maybe that’s why things, or at least certain things, seemed settled.

Evening time and intermittent gray cold rain on the Dharma shack roof. The girls have gone back to Florida and I’m lying here smoking a pipe and into my second beer. The first full chunk of pine crackling in the woodstove. Julio at the foot of the bed, his fur drying out.

This is as alone as I’ve been in I don’t know how long, with no cell or wifi or anything else but Segundo up at the casa making dinner (pasta + bratwurst) and Japhy and Kieran down in their room, probably watching Austin Powers again.

The trailer. Photo by Laura Bernhein.

Earlier this afternoon Segundo and I ‘fixed’ the door to the trailer. There was no real framing to tie the door frame into so I ran a bunch of 2 x 4 blocks on the outside and inside of the aluminum shell and then lagged it all together with 5” lag screws. We’ll see if the bear wants in bad enough.

One more rain squall and now it seems to be clearing but it could close back up again any time. Thoughts of Buenos Aires, how in the winter and spring it would rain so hard that the streets would flood and then it would just keep raining, looking down at the swings and benches of Parque Lezama sitting like boats on a harbor.

All this from our 9th story window with Baby Layla only weeks old and mostly asleep except for when she’d wake up and nurse or we’d bathe her singing “Flota float, flota float, baby Layla flota float’ in some innocent melody with roots in old synagogue chants that smoked back through Sunday School all the way to Jerusalem–maybe mixed with some Salsa bass-line that I heard somewhere and which could’ve been the rhythm – her body now moving back and forth in the tub, eyes happy – I first danced with Lau in Mexico, the same rhythm that probably followed us into bed and led to Layla being born in the first place, bathing now, floating, as the rain kept and keeps falling outside.

This is the rainiest summer I’ve ever seen up here, almost feels like a winter in Western Washington. Still I felt dirty from sitting working on the computer all day and so I take a bag shower, the water 50-something degrees (same as the Dr. Bronner’s –clouded up) as the moisture falls out of the sky and the limbs on the trees where I hang the shower bag.

One of the coldest showers I’ve had and no sun anywhere but then walking up the hill barefoot over the dharma rocks it occurs to me that really I feel better when I’m cold and wet for at least part of the day – it means I’m either kayaking or surfing or hiking through some rained-out mountainside where afterward there might be a fire or at least (unless something is truly off) a warm dry sleeping bag.

Lau thinks there’s a part of me that likes to suffer and maybe she’s right but I think it’s something else that I don’t really know a name for. All I know is that suffering cold wet Dahveed is the first glimpse she got of me—I’d just finished an hours-long afternoon session at Cerritos in Baja.

The big right point was working almost like a wave machine, so good that you stay out until you can’t paddle anymore or you get cold even in that warm water (still colder than your body temp.) so that finally you ride the last wave all the way in and sit there shivering on the sand where this girl notices your face with its content cold happy sadness and wonders “who is this guy; where’s he from?”—all things she told me later. 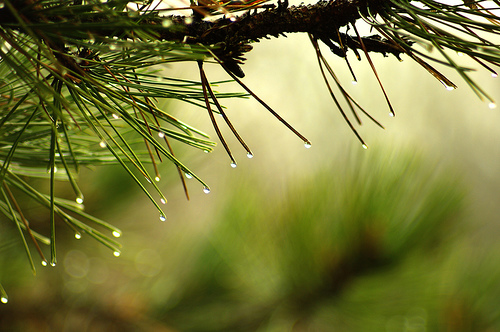 There were stories before that time for sure, but the time between that day and this has collapsed down and flowed so fast it all just seems like one stream of days which, if the truth be told, has lacked in little but those cold wet feeling moments. Once you get married and have a family you tend to want to keep everyone dry.

Strange though, looking out the dharma shack door: the tiny clear drops clinging to the ends of all the Ponderosa needles.

Have a good selection of travel notes? Send your submission to david [at] matadornetwork.com.

Tagged
Narrative Colorado, United States
What did you think of this story?
Meh
Good
Awesome

The best ski and spa resort combos in North America

Hit up Crested Butte, Colorado, for adventure without the flash

The four most exhilarating day hikes in Boulder, Colorado

The absolute best places to ski in North America this winter