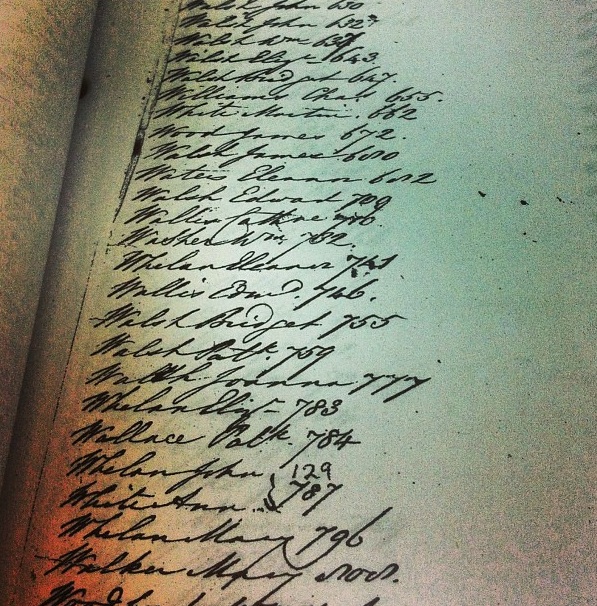 I’d collect a few names, then trace my roots straight back to the Irish town from where they came. I’d easily locate long lost relatives, and then form a lifelong bond with them. I had visions of me showing up to tea at a brick cottage with my dear distant cousin Mary, while her son Joseph tends to the farmland and shows up at the window periodically for a glass of water.

I met my new genealogist at The Rooms Provincial Archives. I was late, and having run to the Archives to make up for lost time, I appeared before him disheveled and out of breath. My pink boots squeaked with every step in the silent research room. “Hi, I’m Candice!” I announced, too loud. He didn’t even look up, just gestured for me to have a seat and we got down to business.

He knew his stuff; I sat there as he pulled records from boxes and shelves. He handed me a giant book filled with the Walsh surname. He easily read his way down through the scrawled handwriting, while I held the text close to my face, squinting and scanning at a snail’s pace.

Over the next couple of weeks, Walter and I spent days poring over documents in the Provincial Archives and the Maritime History Archives. We consulted online resources and church records. I called parishes and harassed priests for their data. I took up heavy drinking (read: I resumed heavy drinking).

Will photos of me as an 18-year-old posing with duckface in the mirror be considered vintage?

As I researched, I felt a growing sense of dread. I remember Walter flipping through pages and mumbling, “Just pages and pages of dead people.” Thousands of people who lived full lives and were loved by families, who never bothered keeping records. Who couldn’t conceive the idea that 200 years later, a distant relative would be trying to learn anything about them. They just lived. Will someone be looking for me 200 years from now? Will someone find my Facebook profile as archival evidence? Will photos of me as an 18-year-old posing with duckface in the mirror be considered vintage?

What I do know is that my family settled in Burin, a peninsula in Placentia Bay of Newfoundland and Labrador. They arrived sometime in the past 200 years, for reasons unknown. I was screwed from the beginning, Walsh being the most common Irish name in Newfoundland and one of the most common in Ireland. We reproduced like rabbits, apparently. The records I needed from the area I grew up in were missing. My only saving grace was the fact that the man I was searching for, my great great grandfather, had an uncommon name: Wilfred.

I questioned why I would even bother with this research, why it mattered at all where I came from. Halfway through, my uncle suffered a violent death too fresh to describe here. I thought, why do I care about all of this, when I’m neglecting the family I have now? I was forced to face my own mortality. How quickly our existence is erased with just a few generations.

But the Newfoundland obsession with our connection with “home” is nothing new, and I’ve always been pulled to Ireland. Newfoundland is often referred to as “the most Irish place outside of Ireland,” and we’ve borrowed the language, traditions, and music over the years. Like the Irish, we’ve got a reputation for being hospitable and smitten with the drink. We also make good storytellers, and lovers.

My big breakthrough happened when Walter and I started going through every single Walsh marriage record in Newfoundland around the time that the Walsh’s lived in Burin. We found that different Walsh families settled in different areas, and the majority of those in Burin were from County Waterford. This makes sense, since Newfoundland’s largest Irish population came from Co. Waterford.

We then found a gravestone in Burin with three Walsh names: Michael, John, and Richard. Names that are dominant in my family tree. They were from Aglish, Waterford, while other Walsh’s / residents in the area were from Lismore…both towns that are within a few miles or each other.

2013 is the year of The Gathering in Ireland, an open invitation for the world to return to Ireland to explore their roots. In the next five weeks I will be travelling the country, embarking on a “homecoming” mission and searching for god knows what. Family. Place. A sense of belonging. And if I don’t find any of those things, Newfoundland will welcome me back.

Tagged
Ireland
What did you think of this story?
Meh
Good
Awesome