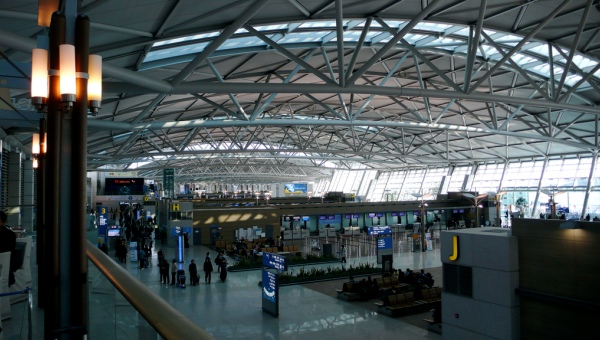 Feature photo by Micah Sittig. Above photo by Leduardo.

Airports are doing more than ever to cope with an ever-increasing number of passengers. Dealing with thousands of passengers on a daily basis has pushed architecture, engineering, and design to new limits. Here are a few notable examples:

Completed in 2005, DFW is capable of handling up to 37,000 passengers per day with the aid of Skylink- the world’s largest airport train. The first major American airport terminal to be built post 9/11, the terminal features the most advanced security features available with state of the art systems. 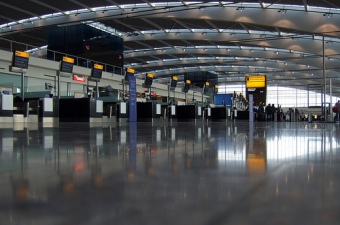 A state of the art baggage system works in partnership with computers at security, check in and departures, making sure your luggage only boards the plane if you do. So no more delays due to a late passenger’s bag being offloaded.

[Editor’s Note: In spite of the airport’s promise to revolutionize air travel, the opening of the new terminal was riddled with problems. Before passing through Terminal 5, you might want to check out some of the documented complaints.]

The white, peaked, fabric roof of the Jeppesen Terminal minimised the building’s impact on this stunning region with its backdrop of the snow-capped Rocky Mountains. With six de-icing pads- each capable of holding five planes – and with all de-icing fluids collected and recycled – the terminal operates in even the worst conditions. 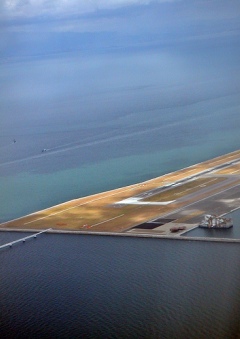 Built on a man-made island in the middle of Osaka Bay, airport engineers had to deal with the high risk of earthquakes, typhoons, storm surges, sinking of the reclaimed land and the construction of a 3km long bridge to link the airport to the mainland.

The airport has sunk 8 meters already, so architects have placed adjustable columns under the terminal to compensate for the shifting land. Despite that sinking feeling, the airport has emerged unscathed from several severe earthquakes that have hit the region in recent years.

Stuck in the airport for a while? Why not take advantage of the free Singapore tour that will whisk you into the city to see the sights before your connection departs. Or you can relax in the spa, fitness area or pool, book into the in terminal hotel for a quick sleep or perhaps just wander around one of the nature trails.

If you have the energy, check out the 24 hour shopping, free Internet, and free movie theatre, or perhaps just grab a sunlounger for a nap before your flight. 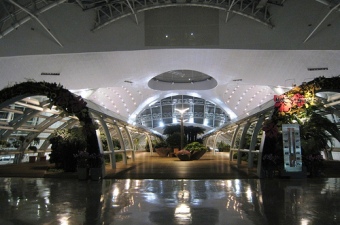 The only airport in Asia to have ILS Cat-IIIb– an instrumental-landing device that allows airline operation when visibility is as low as 50 meters–as well as a host of other incomprehensible software and hardware, Incheon suffers few diversions or cancellations due to extreme weather conditions and is regarded as one of the safest in the world.

Named most eco friendly airport in the world, East Midlands has focused its technology on decreasing its carbon footprint. The airport is working towards carbon neutrality by 2012 and has installed ground-heating pumps, wind catchers, water recycling facilities.

Airport planners also hope to include wind turbines to fill up to 10% of its energy needs. 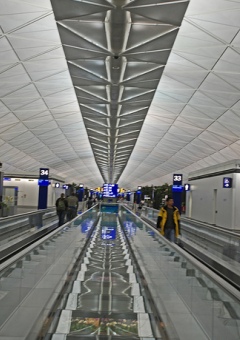 The world’s largest airport in terms of terminal area– 1 million square meters (11 million sq feet) — its new terminal was designed with a range of environmentally friendly techniques that allow natural light, and the associated heat, to reduce energy needs.

The 1km long wing shaped building is an open plan, allowing light and travellers to move freely from check in to departure.

In a city where space is at a premium, an entire mountain was flattened to create the 13km sq island on which this airport stands– increasing the size of the city by 1%.

With an integrated transport centre, the airport is linked not only to central Hong Kong but also to mainland China. The airport is also notable for its partly automated customs and immigration system on site (rather than at the border), to allow smooth passage onto the mainland.

Click here for more information and here for everything you could possibly want (and not want) to know.