View all travel news
Top Destinations
Top CitiesView All Destinations
Trending Regions
Trending Cities
Load More
Author’s note: This was to be my first press trip. Visions of naan bread, squinting heat, burning spices, neon silk on dirt roads, and professional validation were in orbit. Forty-eight saris, 2,000 km, one exploding tire, some mild sexual harassment, and a jail stint later the dream had begun to rust. Bolded, italicized text is from actual emails from the organizers.

Would you like to join us on an expenses-paid rally race across the sun-bleached heart of the Indian subcontinent? Drive a vintage Ambassador car in the inaugural India’s Cup, meet travel industry professionals, and make a documentary film about the history, traditions, and difficulties associated with the ancient garment of sari?

You immediately book your ticket to Chennai.

When you arrive in Chennai a staff member will be there to greet you and show you to your comfortable accommodations. Snacks and refreshments will be waiting for you in your room.

You arrive in the godless, predawn morning. The taxi service that has been recommended to you by the organizer of the rally is no longer operating. In a breeze of smoke, catcalls, and unsolicited strangers trying to porter your bag, you identify the least menacing driver. A price is settled with the tall, middle-aged man with cocaine-spoon pinkie nails. There is an icon of the Virgin Mary noosed to his rearview mirror.

You share a long ride of silence as he tilts the mirror to stare at you, intermittently pointing out garbage fires and the skeleton scaffolding of new construction.

When you are deposited at a nondescript tourist information center at 4am, a man wearing a ski mask and no shoes will open the metal fence for you and lead you to a room with several bunk beds and bars on the windows. You will sleep on a bare mattress. The bath towel provided will be a rag stained with motor oil bearing the insignia of a local mechanics garage. Your snacks and refreshments consist of a half-full bottle of suspect water that you’re afraid to drink. Your teeth will remain slick with mouth sludge for fear of brushing them with this water and swallowing some kind of gut-emulsifying parasite that will render you shit-shamed for the duration of the trip. You clean the sweat and airport debris off of your body with sink water, shampoo, and eye-makeup remover towelettes. You miss your mom. The distilled truth of this moment and each one to follow is: no refreshments.

You will meet and mingle with travel industry professionals and meet like-minded travelers and experience some community spirit along the road.

The first face you see after a dreamless 18-hour sleep is a British woman wearing harem pants and a pained expression. She is the liaison that invited you here. She glances at you from the couch, does not rise to greet you, and casually mentions that she forgot you were coming. She kindly offers you a valium and walking directions to a Chinese restaurant 25 minutes away. Through some sort of divine intervention a lovely Portuguese woman with mermaid hair enters the room and offers to take you out for a beer. You feel the urge to kiss her forehead in gratitude. She, along with a pirate-mouthed Cornish girl, will be your sari-wearing travel companions in the race. Were it not for them your road would lack both community and spirit. You will be christened “The Sarriors” and told by your organizer that the Powderpuff Girls were his inspiration for creating your team. Palm to face.

The Sarriors will see and experience India, learn, and research about the traditions of the sari, the history, ethos, and style of the garment. On the way, the Sarriors will visit sari-making places in India, observe women and their lives in different cities, learn how to rock sari-wearing styles and tackle the problems that come with the sari.

You and your two cohorts are each given 16 saris. They are beautiful. You will explicitly and repeatedly request that event staff not film or photograph you undressing and putting the garment on. A few days into the event, the chief organizer (who looks something akin to the Smurf antagonist Gargamel) will raise his prolific eyebrows at you and confess that for him seeing a western woman in sari is “kind of a sexual fetish.” You see, he will say, “my wife will not wear sari unless my mother is present, but I like to see sari all the time.” You’ll quietly throw up into your mouth and mourn the quick death of professionalism.

The beautifully uniformed and partially cross-eyed officer who escorted you to jail grants you a phone call. You dial up the organizer. You explain the accident and the very pressing problem of the language barrier and your sweat-soaked fear.

You never have the opportunity to visit sari manufacturers, and each morning you have to beg a local woman to help you put your sari on. She graciously tries not to laugh at the spectacle that you make. Beyond this, your interaction with women in sari in different cities will consist of watching their peacock colors blur in your rearview mirror as you try desperately to make it to your next location. You will learn that the problems that come with the sari are not wearing it, but rather wearing it in a circus-like fashion as a Western interloper in remote parts of India. You will be told that wearing the garment is an invitation for gawking and harassment. You will also be told that, as a native, organizer should have known better than to put you in this position.

At its heart, the whole point of this expedition is to make sure that you have an amazing adventure vacation. In order for this to happen we have made every effort to ensure your experience is safe and well organised. Our training days are designed to familiarise you with your Ambassador to ensure you are equipped to tackle a driving style that is uniquely Indian! You will also be introduced to a survival guide on how to drive in India and cope with Indian traffic rules, so you’ll feel confident to tackle the local roads!

You depart four days behind schedule. Your vehicle — while beautifully painted — lacks seat belts, a reliable horn, and a spare tire. (Her name is Betty.) Your education in the rules and terror of driving in India is a 25-minute cruise through an abandoned dirt parking lot on the outskirts of the city. You spend more time in a tuk tuk getting to this dirt field than actually practicing within its perimeter. 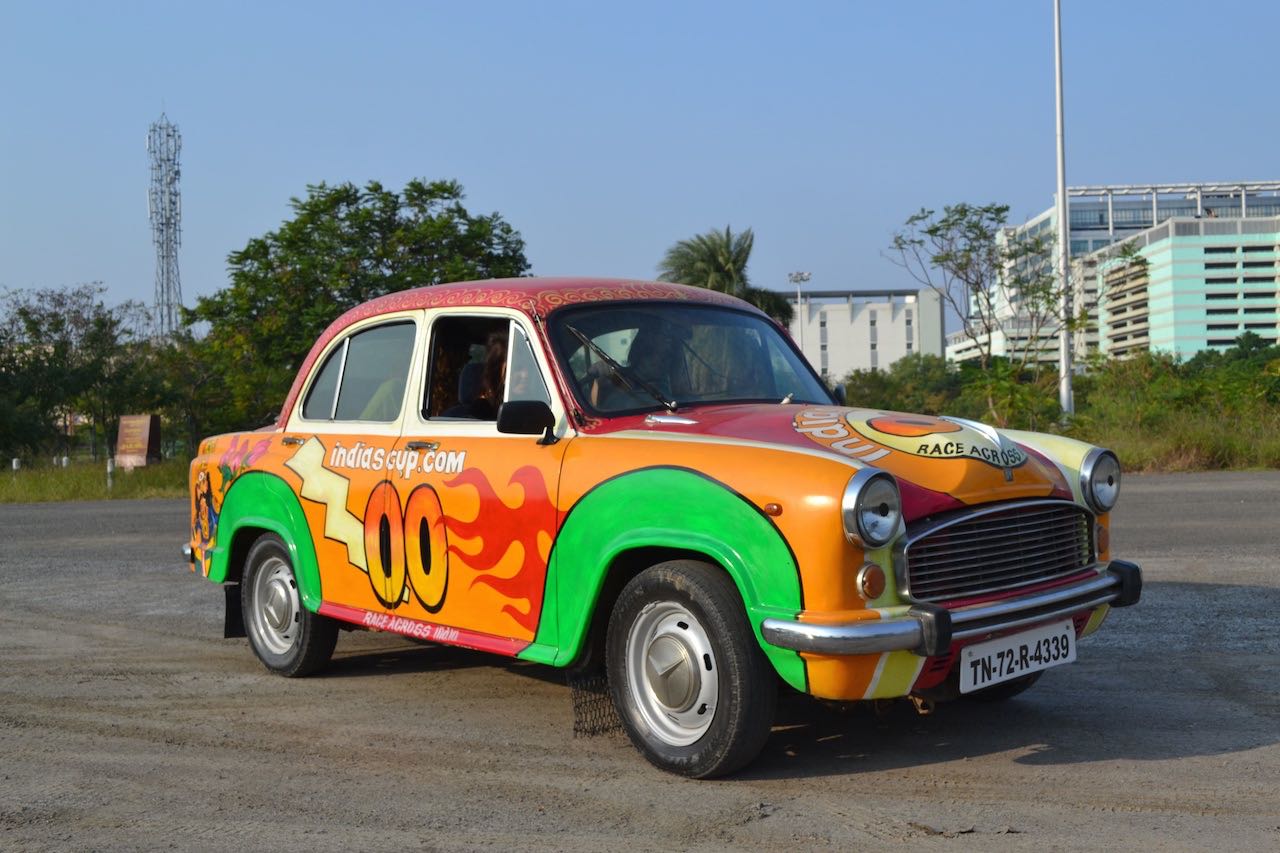 You and your two cohorts will be driving alone in a car on a route that the organizer, nor any of his associates, have ever driven before. You will be in the car driving 12-16 hours a day. You will drive at breakneck speed to make it to each destination before dark lest you risk your life even more by driving in India at night. Obstacles and dangers include, but are not limited, to: temporary blindness from abduction-bright high beams, no lane denomination, vehicles without operative lights pulling out in front of you, and the endless dodging of yolked livestock, children, rogue tractors, and feral dogs.

We’ll take 15 days to cruise through unparalleled scenery, engaging in a new cultural activity by night, be it sampling the local cuisine, engaging in folk dancing, learning to cook, or simply hopping between bars.

Because of the the long days and fear of nightfall, your sampling of the local cuisine is limited to dragging your sweaty self to short pit stops at local gas station eateries. You lubricate yourself in hand sanitizer. In a dark cement corner you gracelessly shovel biryani into your mouth. When you finally come up for air you notice that a collective of men are filming you eat with their cell phones. You feel fear and shame and the dim light of celebrity commonly awarded to people that have wrestled professionally or publicly tried to copulate with Bret Michales.

You have never needed a drink more than you do at the end of this and every day. Your organizers routinely pick dry lodgings far from city centers, thus your so called “bar hopping” consists of bribing strangers to ferry you along highway underpasses in search of warm beer awash with glycerin additives.

This rally is the perfect balance between being a supported experience with the thrill of independent discovery. If the wheels well and truly come off your adventure then our service van is just a phone call away.

On day one of the race, your front right tire explodes while you are driving and, upon further inspection, the tire is revealed to be a dummy. You pull over on a dirt track and attempt to change it out for the spare. The spare is the wrong size. You wait hours for backup from the service van while you sit sweltering in saris in a garage full of men. These men make phone calls and invite an increasing number of their friends to come to the garage, stand in an ominous circle, and watch you wait. On this and several other occasions the service van there to help passes you on the road.

We’re a close team of travellers, who work together to create beautiful, engaging travel adventure experiences. We take pride in delivering only the best.

Following a traffic accident, a mob of men swarms your car and attempts to drag you from it. You foolishly attempt a high-speed getaway. The police intervene and take you to jail. The secretary with the disapproving head nod and the khaki green sari tells you, with accented certainty, that your vehicle will be impounded and you will be booked, charged, and made to stand trial. It is revealed that the car you were driving has no insurance.

The beautifully uniformed and partially cross-eyed officer who escorted you to jail grants you a phone call. You dial up the organizer. You explain the accident and the very pressing problem of the language barrier and your sweat-soaked fear. He tells you that in India to involve him would only make the situation worse. He advises you to make a low-ball rupee offer and run. He then explains he has another call and kindly asks you not to bother him again. He hangs up on you mid-protest. Your sunburned body fills with rage.

Eventually, through the tireless intervention of one of the service van drivers and the sympathy of the English-speaking police chief, you are granted your freedom and your vehicle. You now want to set fire to it out of spite.

You soldier on a few hundred more miles and a handful of days but in a nameless hotel in Kerala you and your cohorts finally abandon Betty. You take off for the beaches of Varkala where the lick of salt water and the slosh of booze slowly turn near death to laughter, and bad choices to good stories.

Tagged
Humor Narrative Student Work India
What did you think of this story?
Meh
Good
Awesome