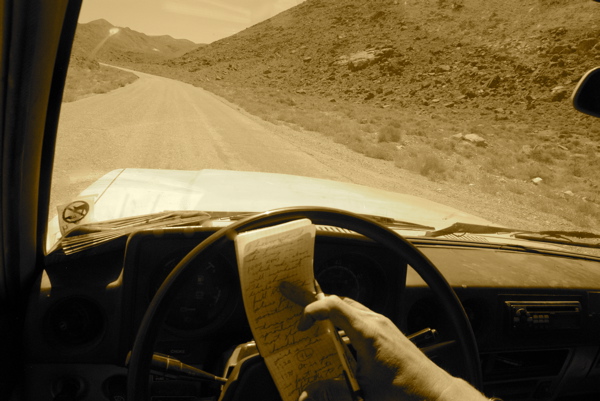 Considering the desert (and other things) at under two miles per hour.

THE NEEDLE ON THE TEMP GAUGE pushed into the red. And then it kept going, like the needle on an old record player when the song ends. We were at the foot of the wash, just out of cell range, still 3500 vertical feet and ten long miles from the crest of the Inyos.

Jasper was in the back, strapped to his booster seat, aged 4.99 and counting. The dog was curled up at his side. I’m gonna have to pull over, I said.

Jasper looked out the window, out across the sun-cracked arroyos of the planet Tatooine — deep Jawa country. He nodded and went back to his drawing. 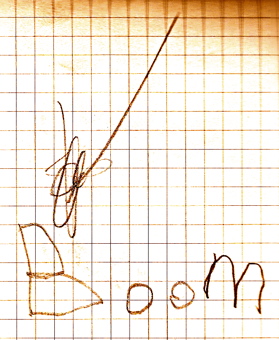 To let the engine cool, he said.

We were on our way to his fifth birthday convocation out at the Eureka Dunes, on the northwestern fringe of Death Valley National Park. We’d had a pleasant morning, rolling down the Owens against the northward exodus of fishermen and boats bound for opening day — Fishmas, they call it. (Good for business, said the woman at the gas station in Big Pine.)

We’d picked up a hitchhiker on the way out of Mammoth. He was wearing a dark suit, a pressed white shirt and tie, and a porkpie hat. He held a document folder on which he’d written:

Independence is the county seat of Inyo, second largest and second least populated county in California, where in 1969 Charles Manson was arraigned and jailed for possession of stolen vehicles after a CHP officer found him hiding in a cupboard up in the Panamints. Aside from the Greek Revival courthouse (its fourth incarnation since the 1860’s, due to earthquake and fire), this roadside hamlet is also home to a terrific little historical museum, a charmingly weathered 1920’s motor hotel (for sale again), and an authentic Franco-Algerian bistro (open sometimes).

What, I asked, half-jokingly, you got a court appearance?

I looked at my watch. It was nearly 8:30. I think we might even get you there on time, I said.

He introduced himself as Robert. But most people call me Beto, he said. He slipped on a pair of Spy shades, settled in and told us the story of how he and his buddy’d been busted building a bike jump out at the far end of Sherwin meadow, at the base of Mammoth Rock, on public land.

We didn’t even get to building the thing, he said. A hiker had tipped off the Forest Service and for two days the rangers had watched and taken pics from above as Beto and partner worked to divert a stream so they’d have water to wet down the jump when it got too dusty.

He said he hadn’t known how things worked in these parts, that such a thing was illegal and so forth. But he didn’t harbor illusions his former ignorance would stand for shit in court. With a certain amount of pride — pride I could understand and appreciate — he showed me the official document:

He’d been to court before; the reason he wasn’t driving himself on this particular morning was the DUI he’d garnered not long ago. He wondered what this judge would be like, and if he’d ever get his shovels back. Jasper, for his part, kept silent all the way to Independence. 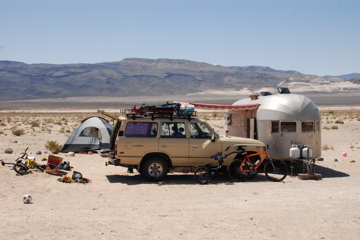 On the Mojave, not traveling light.

We dropped the accused across the street from the courthouse. He thumbed my email address into his Blackberry so he could let us know how it went.*

We skirted Owens Dry Lake, the poisonous surface of which, courtesy of a century’s industrial-scale water diversion by the City of Los Angeles, was again in the process of blowing away to Nevada.

We retrieved the old aluminum fuselage from its winter pasture in Olancha, turned around, and began the slow crawl back upriver to Big Pine and our road into the Inyos. Coming back through Independence there was no sign of Robert M_____.

THE CAP ON THE FLUID RESERVOIR popped before I could find a reasonable place to pull the whole circus off the road. Steam blew out from under the hood. I poured a couple of gallons of good drinking water over the radiator, plus another gallon or so into the reservoir.

We sat for a while, enjoying a breeze like midsummer at the shore — and the silence. Eventually, the gauge crept back to normal. A local woman from the valley came by in a late-model Jeep and insisted on refilling my jerry can with water. I locked the hubs, shifted into 4-wheel low, and pressed on.

The worst that could happen, I figured, was that we’d have to abandon the rig a little ways up the road, there to consolidate our shit and hitch a ride with one of the truckloads of friends due out that way later in the afternoon. I could deal with all this steel and aluminum later, I thought. 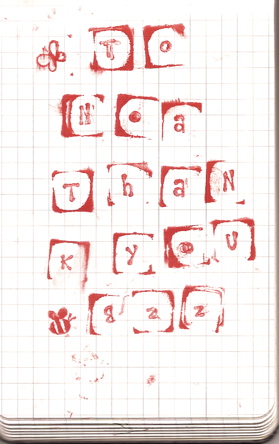 But then I found that if I kept the heat blasting and the engine’s revolutions down around 1000 per minute — the speedometer flickering above zero like a cheap tealight in the wind, the truck barely ratcheting itself and its load uphill at about the pace a man might stroll beside a pair of oxen bearing his family and other worldly goods across a strange continent — I could keep the temp close to normal.

I was reminded of the time I drove from Tijuana all the way to Los Angeles in low gear, having shorn off my rear drive shaft in a late-night collision with an open manhole. And a certain long night’s gear-grinding bus ascent of Morocco’s Haut Atlas. And a slow climb from Batopilas to Creel with a French Canadian gambler, two Swedish girls, and a sick Tarahumara gentleman writhing atop the gear in the back.

There was time now, finally, to contemplate the whole great history of the wheel, the evolution from trail to road and beyond, the extraordinary technological leap in the newfound ability to ferry stones from here to there without necessarily resorting to slavery.

It was a fine way to travel, especially out here where there was no traffic. I came to appreciate the sear of engine-air on my toes. Jasper gathered his books and stamp kit and drawing implements and climbed up into the front seat (United States of America v. David Page). We saw a total of four vehicles on the road that afternoon. In about as many hours. I had to look at the road occasionally, in case we had to work around some topographic feature, but otherwise we got a lot done.

We took turns reading to each other and looking out at the world as it crept not at all inexorably by. By the time the spry little Volkswagen camper containing my wife happened upon us (we’d drifted enough to one side that they were able to sneak around us), still a long grind from the top, we’d done three rounds of The Tortoise and the Jackrabbit, had studied hundreds of what we took to be swallows’ nests in the roadcuts, had stamped out a thank-you note in red ink, had marveled at the Indian Paintbrush, the tufty grass poking from dry sand, the crazy chandeliers of pink and white flowers exploding from thornbushes, the cries of seagulls on their way to Mono Lake, the spun-silk cocoons in the mesquite, the lizards, the all-but-erased mining roads cut in switchbacks against great ribs of slate running upwise and canted like the backbone of some scoliotic dinosaur.

We’d seen rusted-tin pop-tab beer cans in the bushes, a sun-bleached squeeze-bottle of Parkay margarine, a refrigerator, and an ancient coil of barbless fence wire. We’d seen Jawa caves from various tribes, and a witch’s castle, flying monkeys bearing messages like passenger pigeons, and a herd of T-Rexes grazing in the Joshua trees. We’d relived the hunter shooting Babar’s mother four times over and every goddamned time felt the emptiness of it.

Do you want to go with those guys? I said to Jasper (meaning with his mother et. al in the Volkswagen). They’ll get to the dunes hours before we do.

Nah, he said. The birthday boy should always get there last.

* It went like this: the judge found him guilty on all three counts: (1) construction without a permit; (2) making false statements (he’d tried to give a fake name — it’d worked on another occasion); and (3) threatening, intimidating or interfering with a Forest Service officer. The prosecutor wanted $900 and 3 years probation. The judge settled on a $450 fine and 50 hours of community service.