A week after a 7.8-magnitude earthquake struck Nepal, relief supplies are finally beginning to reach the country’s more remote villages.

But the aid is arriving at a trickle and there is not enough for everyone. Desperate villagers have mobbed aid delivery trucks after realizing the food could run out before their turn arrives. Even for those who did get some food, the threat of robbery and violence is never far away.

In this small village about five hours drive from Kathmandu, locals waited all day for a shipment of rice, beans, and noodles to arrive. These farmers eke a living from the steppes that line the foothills of the Himalayas. And they lost everything. Most of them said any food they had is buried in their collapsed houses.

A convoy of trucks, carrying food for about 3,000 people, was delayed by the large boulders that still block many of the country’s roads. They were also delayed by bureaucracy within the government, which is requiring aid groups heading out to deliver relief to go through a sometimes lengthy approval process.

“We were really worried about what to eat and where we would sleep,” Ranjaman Tamang said. He walked three hours from his village and waited all day for the supplies. “Even our animals died when the house collapsed. We were hopeless for these days.” 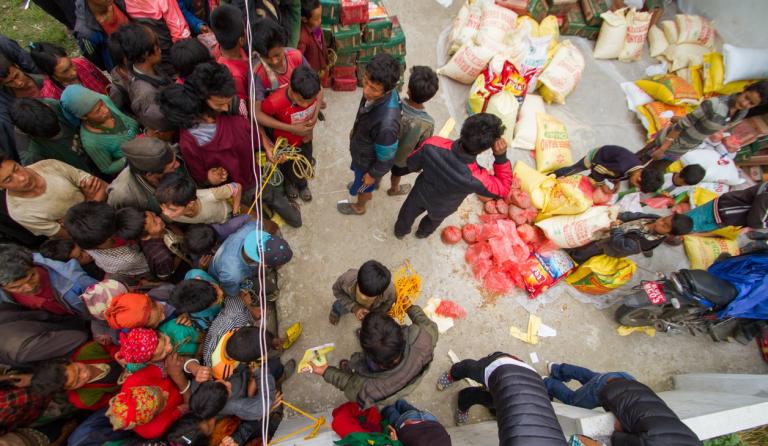 While the delivery made it just before evening fell, many villagers had to then walk for hours to their homes, carrying up to 35 kilograms of food on their backs.

Their hike felt dangerous — rumors had spread that hungry thieves were attacking people for their food. Such stories dissuaded many from even showing up for the delivery of aid on the first day.

Bimala Tamang braved the trip on her own because her husband’s arm was injured when their house collapsed. When asked about her home, she broke into tears. Her daughter was killed and the rest of her family is starving.

Throughout the morning on Friday, locals waited patiently in line for their allotment of food. But with about 70 people left, it became clear there wasn’t enough for everyone. People pushed into the courtyard where the food was being distributed. One man reached over the wall and grabbed a bag of rice. A free-for-all ensued. Everyone rushed in, grabbing bags of rice and beans.

Within minutes, all that was left was beans spilled on the ground. Women swept them into their shawls and carried them away too. The police in the area said they have been trying to control the crowds of people when food is delivered. But the police force here is small. And many officers are working frantically to secure relief supplies for others, even as the earthquake flattened many of their own homes.

NarrativeDiary of the Nepal Earthquake: Part 1

As the days without relief drag on, people are becoming more desperate.

The challenge of getting food and shelter to these mountainous areas is only the first of many for the Nepalese people.

The reality of the situation set in for Jitbahadur Tamang as he waited to collect his bag of rice.

“We’ve been sleeping outside, and it’s cold, ” he said. “We are worried because we don’t have money to rebuild.”

By Stephen Groves, GlobalPost
This article is syndicated from GlobalPost.

Tagged
News Nepal
What did you think of this story?
Meh
Good
Awesome