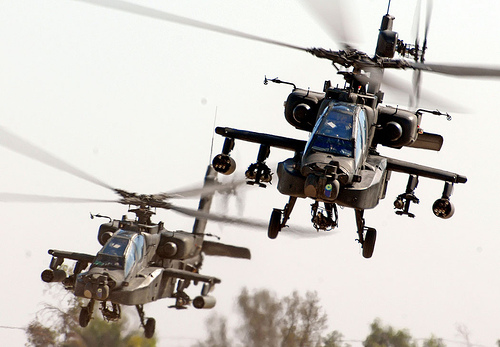 Take two media accounts of the same news event, and compare them.

Step 1: Read what the Globe and Mail had to say about an incident on the Syria-Iraq border this weekend:

U.S. military helicopters launched an extremely rare attack Sunday on Syrian territory close to the border with Iraq, killing eight people in a strike the government in Damascus condemned as “serious aggression.”

A U.S. military official said the raid by special forces targeted the foreign fighter network that travels through Syria into Iraq. The Americans have been unable to shut the network down in the area because Syria was out of the military’s reach.

“We are taking matters into our own hands,” the official told The Associated Press on condition of anonymity because of the political sensitivity of cross-border raids.

There’s not a whole lot of ambiguity here.

Syria’s state-run news channel later reported that United States helicopters had attacked an area within Syria, near the town of Abu Kamal. The official news agency, SANA, cited an anonymous official as saying four American helicopters had “launched aggression on a civilian building under construction,” killing eight people, and that the Syrian deputy foreign minister had summoned the chargé d’affaires from the American and Iraqi Embassies in protest.

A senior American military official, however, said United States military helicopters were not involved in the incident.

This one tells a story of doubt, confusion. Conflicting reports.

The two stories paint very different pictures, and neither one references the other’s contradictory sources.

So which one is true?

It’s tough to say. Both are reputable newspapers.

The New York Times hasn’t been afraid to criticize the Bush government, so there’s no reason to assume that they would obscure the truth about an American incursion. On the other hand, the Globe and Mail is pretty middle-of-the-road — not the type of paper to be seeking any and every opportunity to pounce on and exaggerate a potential American faux pas.

I’ll keep an eye on the news to see if the details of the incident get straightened out. In the meantime, let’s call it a valuable lesson in critical reading: question everything in the news, and pay close attention to the words the reporter chooses.

I know I’ll be making sure that I read 2 or 3 different sources on each major story for the next little while.

Photo of US Army helocopters in Iraq by Army.mil (Creative Commons)