MEXICO CITY — It’s no secret: Mexican politicians have a reputation for being corrupt as hell.

For decades, many Mexicans were resigned to that kind of attitude. But finally, public anger is forcing change.

Under pressure, Mexico’s congress has passed a law to create a so-called anti-corruption system. Activists have built a web platform to pressure political candidates to show their wealth. And journalists have exposed corrupt acts, resulting in resignations.

Mexico still has an uphill struggle. It’s tried to tackle corruption before. But some here are hopeful that this new momentum will lead to long-term improvements.

“It is like we are in the eye of the hurricane,” says Eduardo Bohorquez, head of the anti-graft group Mexican Transparency. “There is a crisis of confidence in politicians, which will rage for some time. But this is forcing some advances.”

In November, the mayor of the town Iguala, Jose Luis Abarca, was arrested and charged with working with narco-traffickers in the disappearance of 43 students. He also reportedly had dozens of houses and jewelry stores that he may have bought with drug money.

While that was going on, a nasty scandal smacked President Enrique Peña Nieto. Investigative reporters revealed that his wife had a $7 million mansion in the name of a company rich off government contracts.

Hundreds of thousands marched in the following months to protest violence and corruption, some calling for Peña Nieto to resign.

Bohorquez, the anti-corruption campaigner, says the public outcry compelled him to action.

“I wanted to find a way to turn this anger into concrete change,” he says. 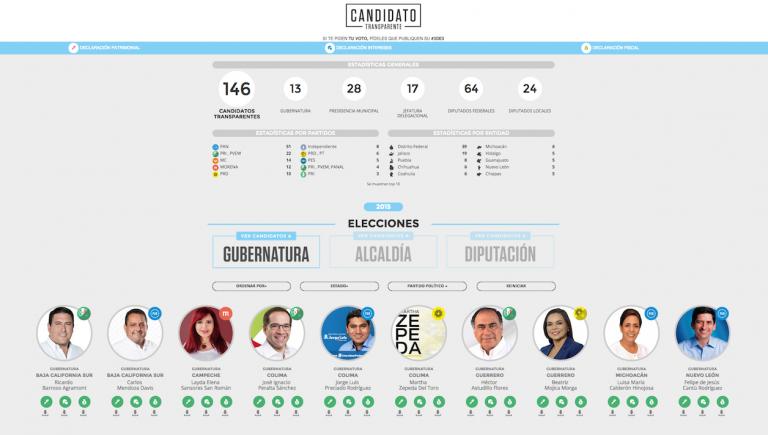 Bohorquez helped create the website Transparent Candidate. Here’s how it works. Political hopefuls can upload information about their assets, interest income and taxes, making the data accessible for anyone with an internet connection. Twitter buttons feature right on each candidate’s picture, baiting citizens to share it online.

As of Tuesday, a quarter of the more than 800 candidates in June’s midterm polls have signed up. They include prospective mayors, governors, and federal and local legislators.

Still, many are holding out, not surprisingly. Mexican officials are notorious for hiding mansions, apartments in Miami or luxury items. Bohorquez hopes that in future votes the platform will grow so large that all candidates eventually have to join it.

Excessive wealth has a particular sting in Mexico. The country’s wide gap between rich and poor means the population’s top 20 percent earns almost 13 times as much as the bottom 20 percent, according to the Organization for Economic Cooperation and Development (OECD).

But politicos have another reason to dish about their fortunes. In April, the congress approved new rules that empower anti-graft investigators and obligate politicians to reveal any potential conflicts of interest.

Social media has also thrown some punches. When the head of the Water Commission, David Korenfeld, took his family to the airport for vacation via government helicopter, a neighbor took photos and posted them online. Korenfeld resigned on April 9. Mexico’s Twitter exploded.

“A few years ago, there would be no means to expose this type of corruption,” says political analyst Jorge Chabat. “But with the new technology and the current environment, he was forced to leave his post.”

But progress toward a scandal-free Mexico has hit some setbacks.

Carmen Aristegui knows this better than anyone. She’s the prominent journalist who led the team that exposed the first lady’s mansion. In March, she was fired from Mexican radio station MVS, where she hosted a morning news show. MVS claimed it was over internal disputes, but Aristegui accuses the presidency of conspiring to silence her by pressuring the station’s owners to let her go.

“It’s clearly a form of censorship,” she told Univision host Jorge Ramos. “You have to see the hand that is rocking the cradle.”

Aristegui is fighting in court to get back on the radio. She continues to host a television show on CNN and run her own news website, but those don’t have as big an audience in Mexico as her MVS morning show.

The Aristegui case could send a message to other journalists to avoid exposing corruption at the highest level.
“The absence of Aristegui’s news show can be felt with a silence over some issues of fundamental public interest,” writes journalist Jenaro Villamil.

That’s bad news in Mexico, where working in journalism can be life-threatening.

What also slows progress is that President Peña Nieto is criticized for lacking leadership to head up an anti-corruption drive.

While he may not have actually committed a crime in connection with his wife’s house, the scandal hurts him politically, says the analyst Chabat.

“It is difficult for the government to mend this damage and win back public confidence,” Chabat says. “We may see a lame duck president during the next three years.”

The size of the challenge is also daunting. Mexico ranked 103rd of 170 countries in a global corruption index. The problem costs the economy $20 billion a year, by one think tank’s estimate.

The country’s corruption fighters hope these new mechanisms will cut a path for a more transparent congress elected on June 7, and will play big in the next presidential election three years from now.

“The public pressure over corruption is bigger than it has ever been before in Mexico,” Chabat says. “I don’t see this going away anytime soon.”

By Ioan Grillo, GlobalPost
This article is syndicated from GlobalPost.

Tagged
Activism Mexico
What did you think of this story?
Meh
Good
Awesome