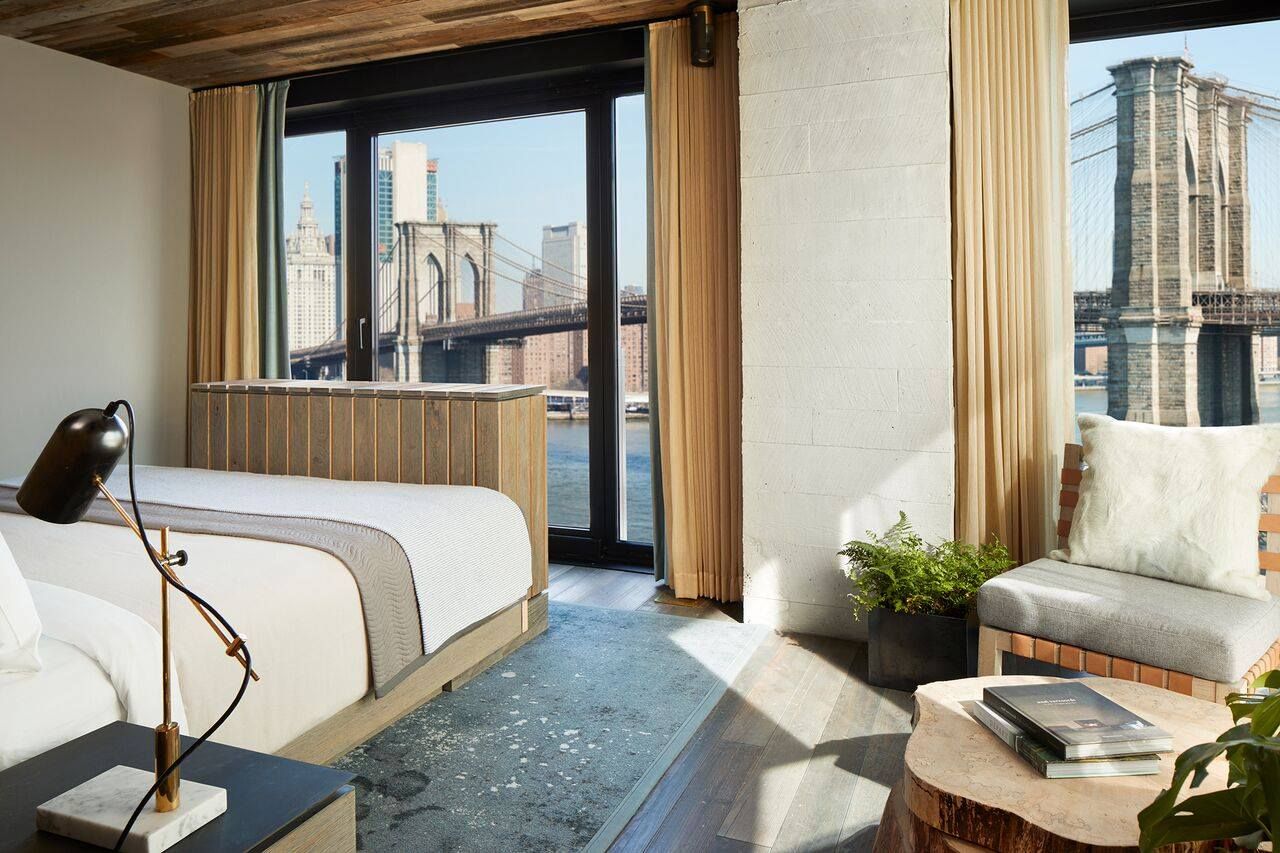 1Hotel Brooklyn Bridge has received multiple accolades — “Sustainable Luxe: 5 Hotels Doing it Right” by National Geographic — and was listed as a “Top Hotel & Resort to Travel to in 2017” by The New York Times. While booking, guests can choose a room with a view of either the Manhattan skyline, the Statue of Liberty, or an up-close-and-personal view of the Brooklyn Bridge.

To-do’s in the area: Walk the Brooklyn Bridge. Take a ride on Jane’s Carousel.

Every room in EVEN Hotel Brooklyn is almost a mini-spa getaway. Guests can opt for one of their Wellness Rooms, with an in-room training zone and videos, a fitness kit, spa-like shower, eco-friendly products, and natural eucalyptus linens.

To-do’s in the area: See a concert at Barclays Center. Dinner and a movie at Alamo Drafthouse. 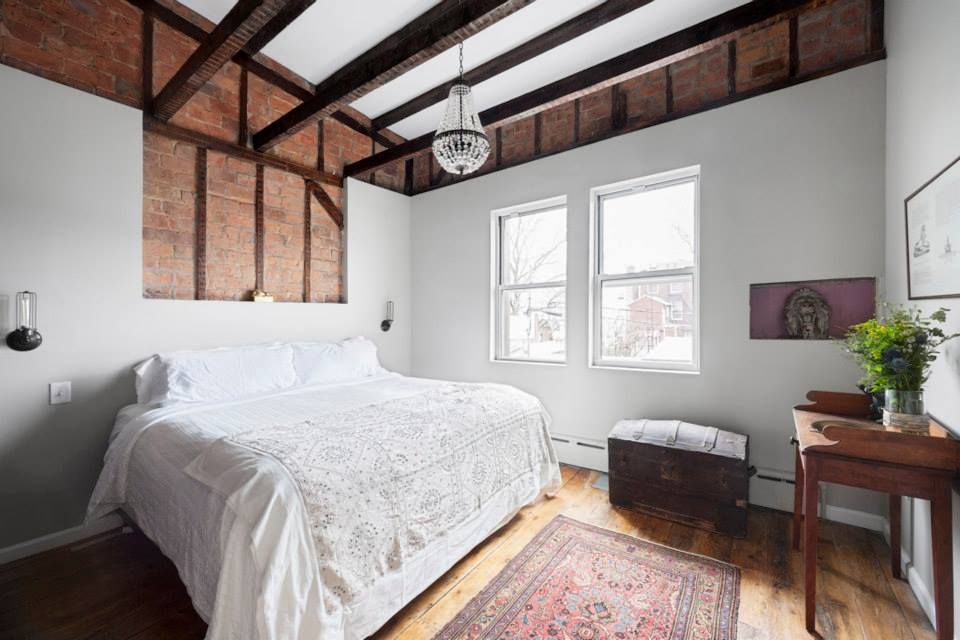 Urban Cowboy is a bed-and-breakfast that transports guests to the rustic relaxation of Tennessee. Visitors also have the option to stay at “The Tree House”, the newest addition to the Urban Cowboy spread, where they can enjoy an open-air living room and a private roof deck.

To-do’s in the area: Take a tour of Brooklyn Brewery. Watch an outdoor film at McCarren Park. 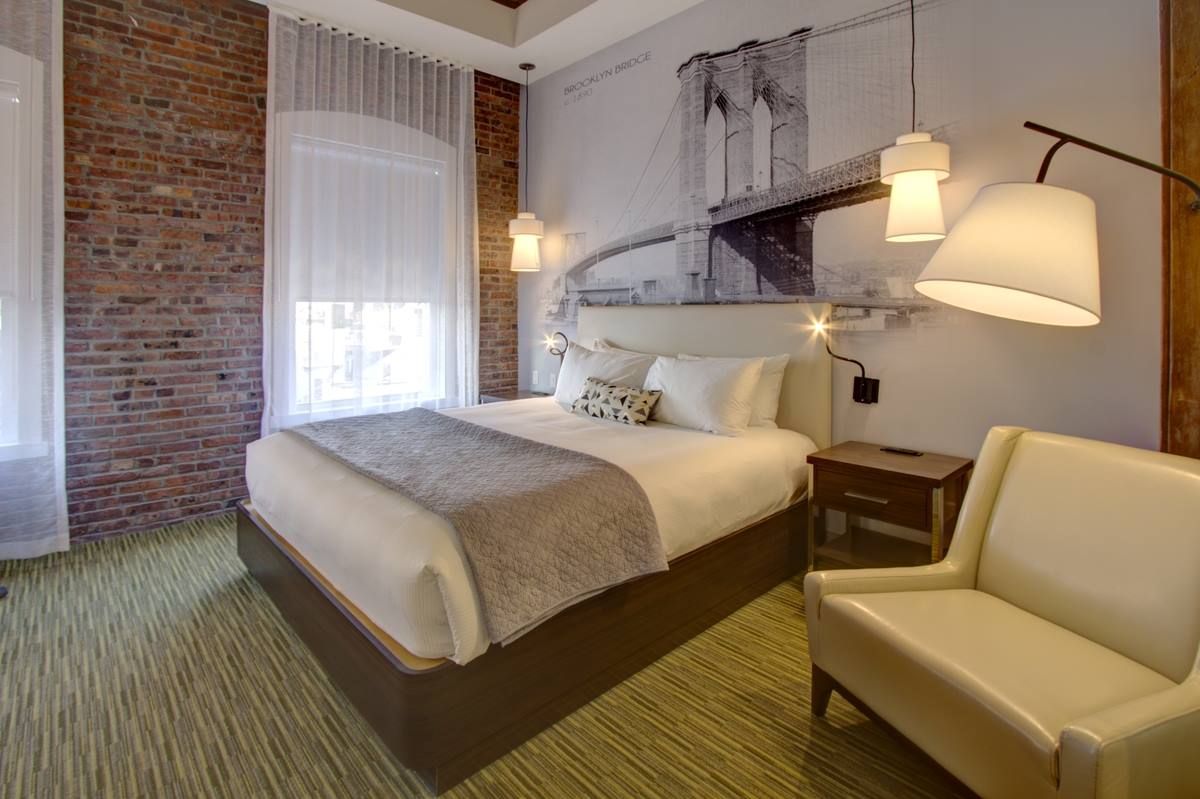 The Brooklyn found the perfect middle ground between luxury and urban New York, by combining elements like reclaimed wood with brick walls, and euro-top beds set in front of Brooklyn-themed murals.

To-do’s in the area: Visit the Brooklyn Museum. Catch a show at the historic BAM Harvey Theater. 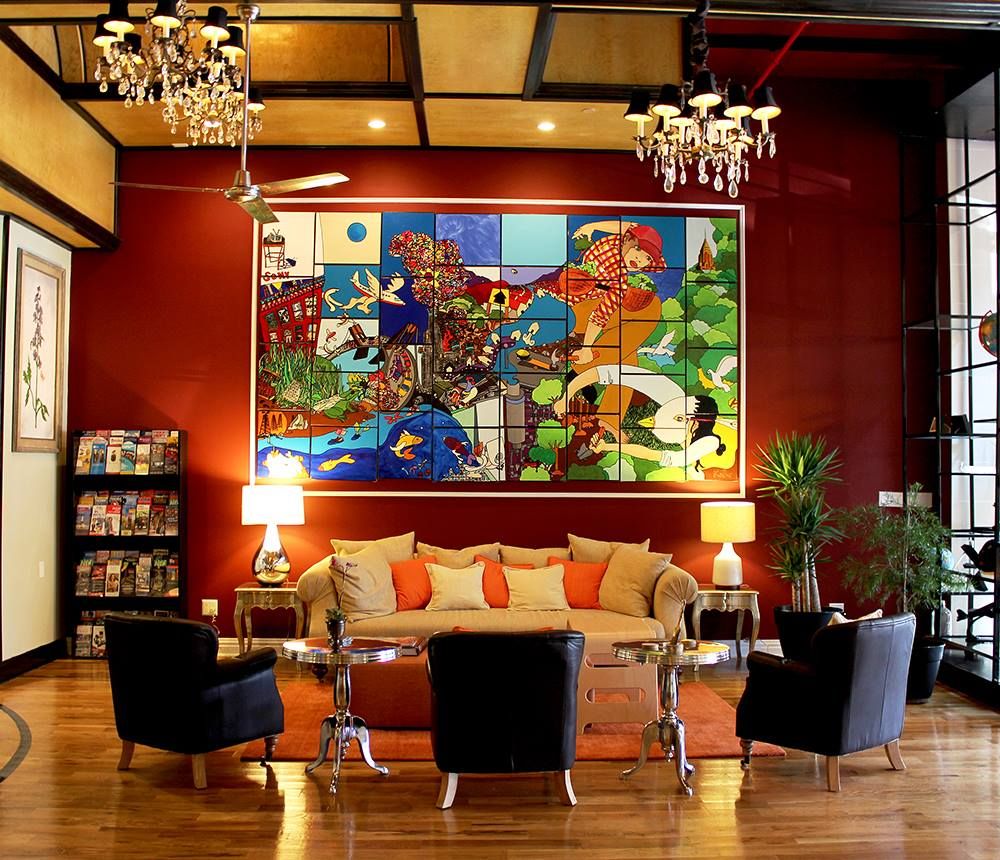 The Box House Hotel is a hotel converted from an old factory into a hotel with a little quirk and a lot of colors added. Each has original artwork by Brooklyn-artist Kip Jacobs and many rooms include a personal terrace with a view of the Manhattan skyline.

To-do’s in the area: Appreciate some art at the Greenpoint Gallery. Attend a class or event at Eagle Street Rooftop Farm. 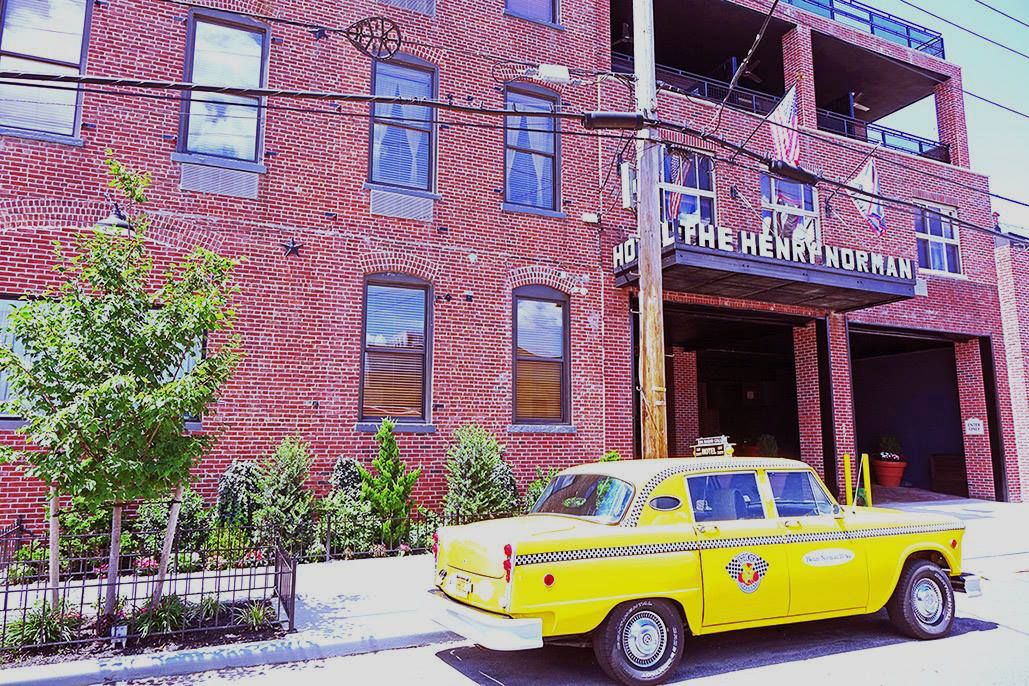 To-do’s in the area: Stop by the Museum of Food and Drink. Stroll through Msgr. McGolrick Park.

New York Marriott at Brooklyn Bridge may be one of very few Brooklyn hotels with a pool, but the biggest draw is its specific location in the center of the Downtown Brooklyn commercial area and close enough to Manhattan — ideal for business stays, conventions, and events.

To-do’s in the area: Learn more about Brooklyn culture at the Brooklyn Historical Society. Walk through historic train cars at the New York Transit Museum. 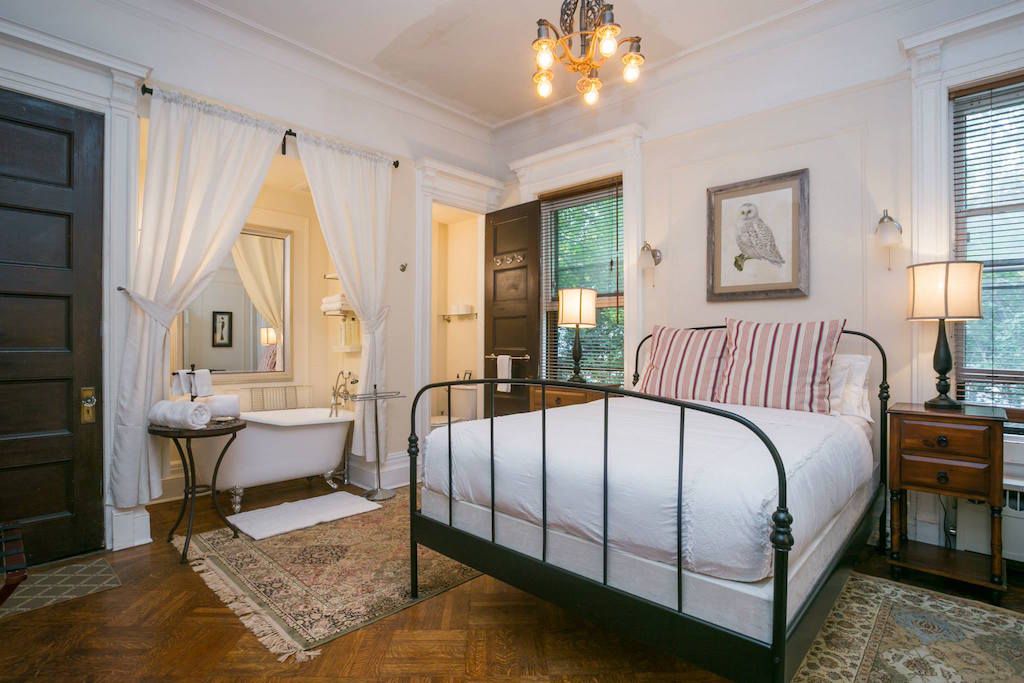 Lefferts Manor is one of the better-known bed and breakfasts in Brooklyn due to reviews from consistently satisfied customers who comment that the manor feels “more like a home, and less like a hotel.” Lefferts Manor sticks to its B&B roots and does it well, with a choice of eight different rooms, as well as three apartments each complete with a kitchen or kitchenette.

To-do’s in the area: Enjoy the beauty of the Brooklyn Botanic Gardens. Learn about wildlife conservation at the Prospect Park Zoo. 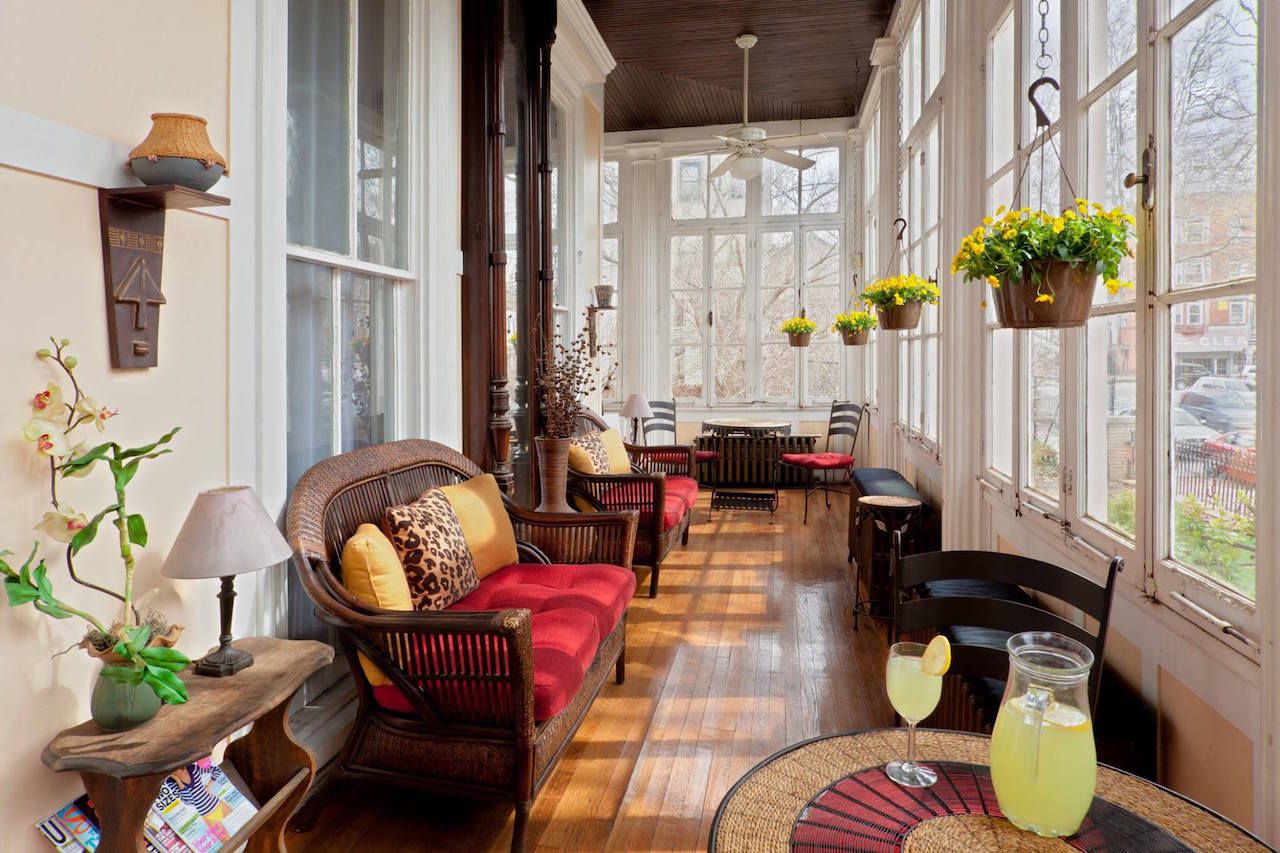 This 1860’s landmark mansion is located in historic Stuyvesant and is designed with 14-foot ceilings, ornate fireplaces, and Italianate villa features. Akwaaba Mansion‘s “special touches” include a secluded garden, a hearty Southern breakfast, and afternoon tea.

To do’s in the area: Take a walking tour of the Bed-Stuy Historic District.

With its own Beer Garden, complete with Germany schoolyard tables and strung lights, the Dazzler Brooklyn Hotel seats up to 175 guests who have the option of both American and European beers, as well as standard Beer Garden fare like pretzels and sausages. The Dazzler also has its own cafe where guests can enjoy cappuccinos and pastries in the morning or wine and small plates for their late-night snacks. A new American-Italian restaurant is planned to open this summer.

To-do’s in the area: Book a spot on the Beer and Pizza tour by the New York Bus Tour and do some shopping at the Brooklyn Borough Hall Greenmarket.

Insider GuidesThe 5 Best Places for Street Food in Brooklyn
Tagged
Insider Guides
What did you think of this story?
Meh
Good
Awesome

15 Signs You've Been Away From Brooklyn Too Long