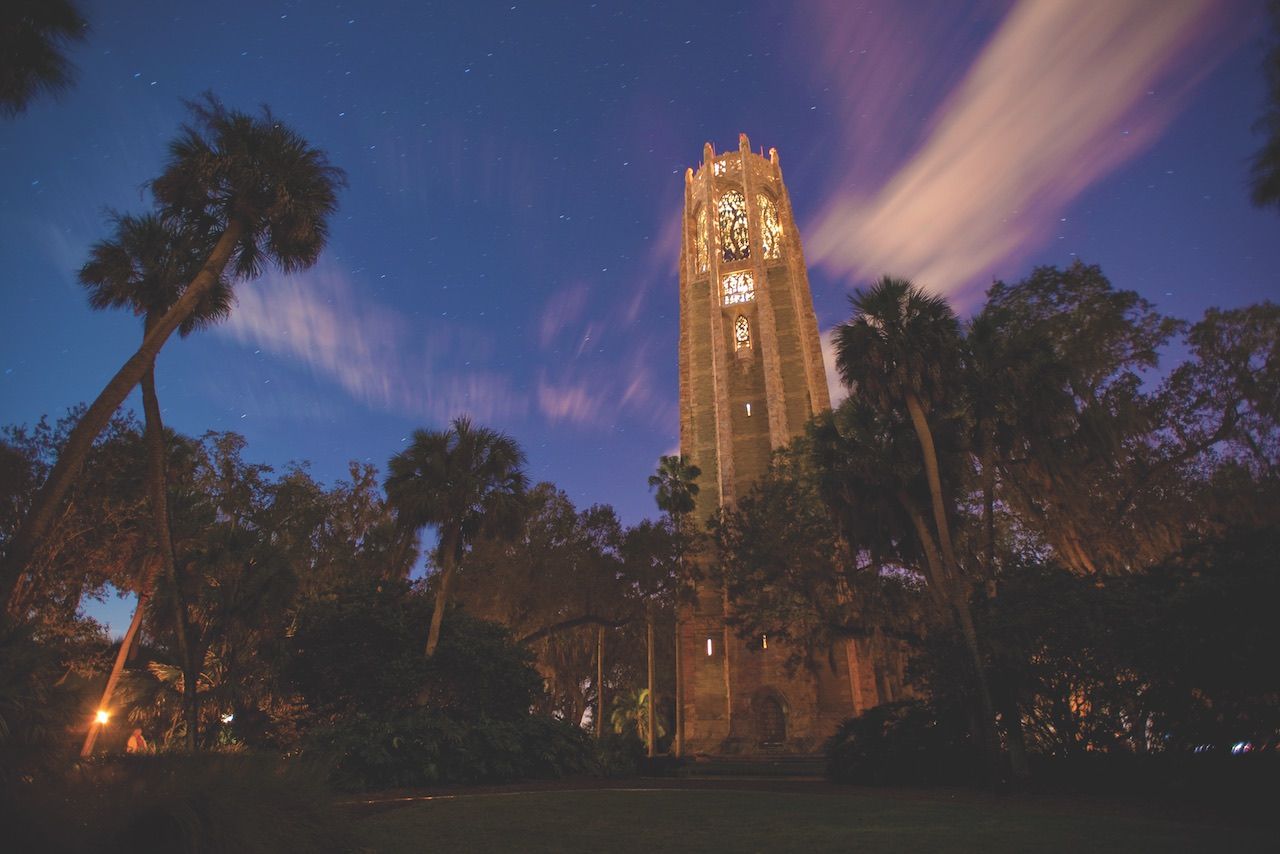 Bok Tower Gardens is a perfectly nice botanical garden — seasonally blooming azaleas, camellias, and magnolias hiding the occasional tortoise or indigo snake, birds adding to the soundtrack in surround-sound. But what’s arguably the most memorable attraction here is decidedly man-made. The 205-foot neo-Gothic Singing Tower (complete with a 60-bell carillon) serves as the centerpiece to these lush gardens, drawing eyes upward since 1929.

Famed landscape architect Frederick Law Olmsted Jr. designed these gardens, a national historic landmark often overlooked by tourists, as a place to relax and slow down. Apart from the tower and the green space, there are also nature trails (the grounds sit along the Great Florida Birding Trail), the 20-room Pinewood Estate, and Hammock Hollow Children’s Garden — a rambling expanse of splashing fountains, boardwalks, and tunnels. But before you leave, be sure to catch one of the Singing Tower’s twice-daily concerts, performed by some of the world’s best carillonneurs.

2. Getting lost in a pile of LEGO bricks 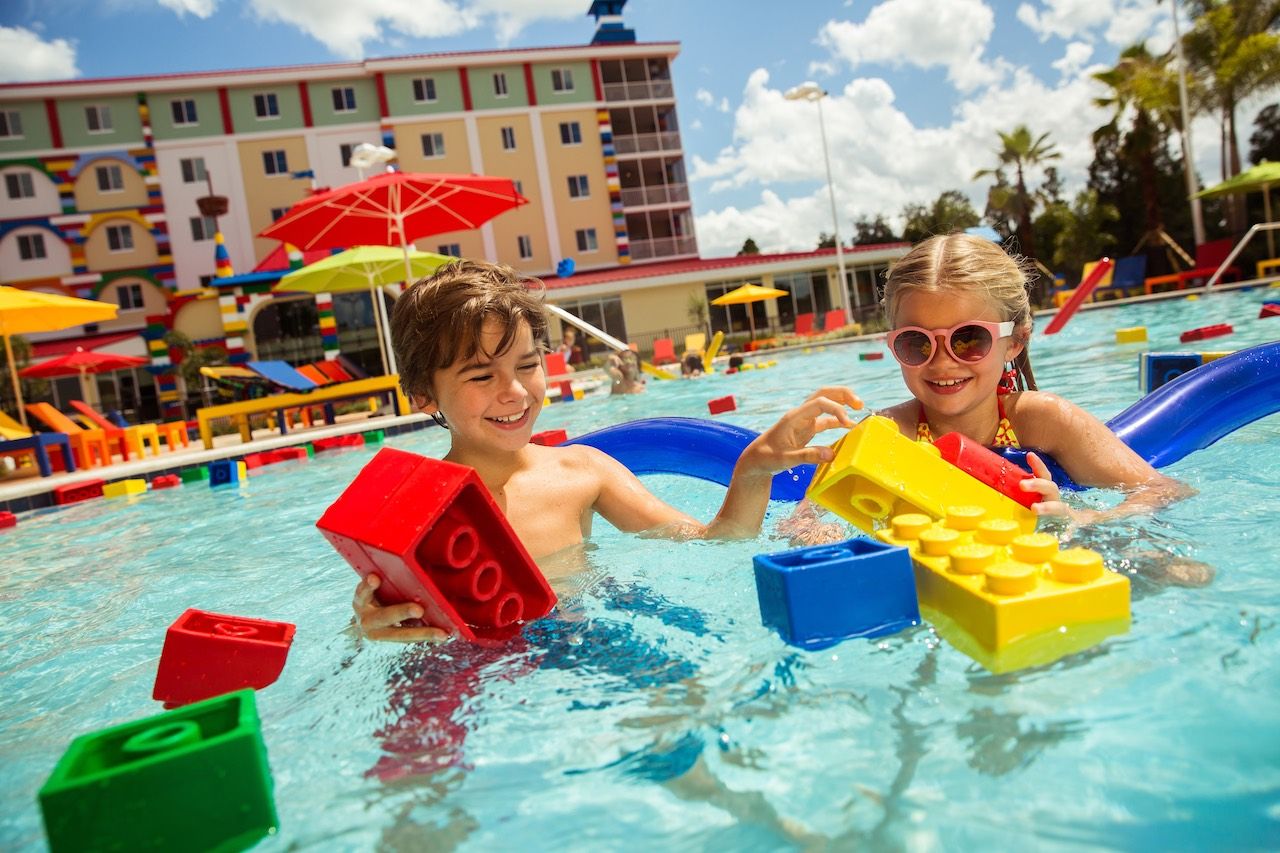 Less than an hour’s drive from that world-famous mouse, you’ll find a different kind of kingdom. Open since 2011, LEGOLAND Florida Resort is home to 50+ rides (like LEGO NINJAGO World, Flying School, and Project X), a resort and waterpark, and gigantic, hard-to-believe LEGO-brick creations painstakingly constructed by the world’s most genius builders. If you’ve got kids anywhere from the ages of 2 to 12, this is an easy sell — and an awesome day.

Built around the old Cypress Gardens, Florida’s original theme park, LEGOLAND mixes the botanical beauty of its predecessor with the colorful fun of LEGO. The kids will meet LEGO heroes, swim in a pool lined with soft LEGO blocks, wade through rainbow-hued pits of LEGO bricks, and create their own masterpieces.

3. Witnessing life on a dude ranch 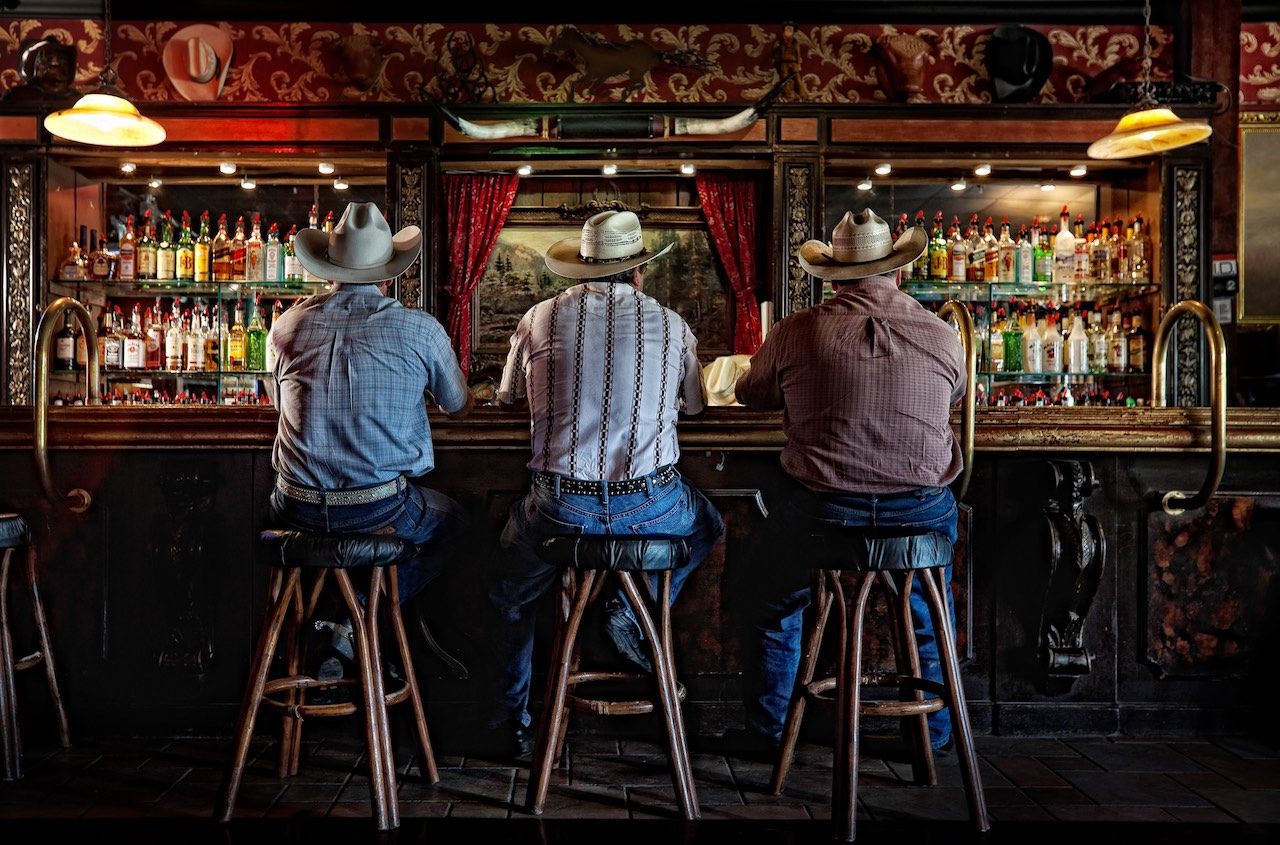 Watch a rodeo, ride real horses and mechanical bulls, learn to shoot a bow and arrow like your favorite fictional post-apocalyptic teen heroine…how sweet does this sound? Westgate River Ranch Resort offers the unplugged entertainment we usually only see on TV — only here, it’s real life.

With cookouts, skeet shooting, and themed accommodations (even luxury tepees), leave your worries at the barn door and get ready for a totally immersive adventure. After all, Florida once was a land of cowboys and cattle ranchers, so this isn’t that much of a stretch. And if keeping it old school isn’t enough, Westgate also has a mini-golf course, nine holes of golf in non-miniature, zip lines, and rock climbing, plus airboat and swamp buggy rides.

4. Going on an actual wildlife safari 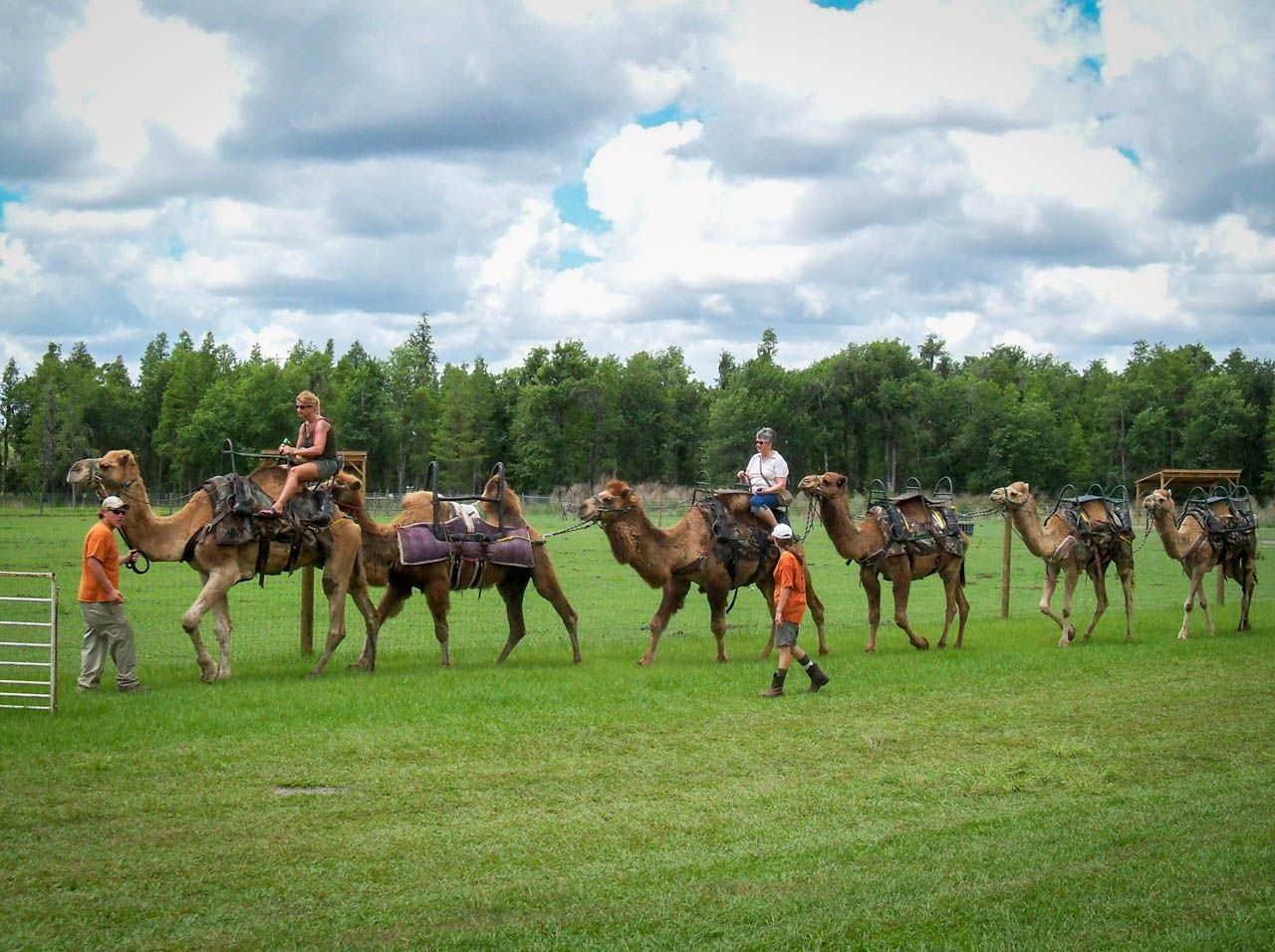 A slice of Africa in the center of Florida? A safari without the price tag or jet lag, and you can drive there? Welcome to Safari Wilderness, 260+ acres of cypress domes and bay trees supporting some serious wildlife, all surrounded by Florida’s great Green Swamp.

The park isn’t just a one-trick pony, either — you can explore the flatlands via safari truck, kayak, or camelback. Each customized expedition will give you the chance to get up close and personal with zebras, spiral-horned greater kudu, soft-nosed elands, and even a rare species of oryx that’s extinct in the wild. You can feed grapes to the ring-tailed lemurs and watch them tilt their heads back as they savor every sweet drop of juice. You can paddle past defassa waterbuck on your way to Lemur Island (rest assured it’s named so for a reason). Whatever adventure you choose, you’ll definitely forget civilization is just a short drive away.

5. Taking in the best of Frank Lloyd Wright 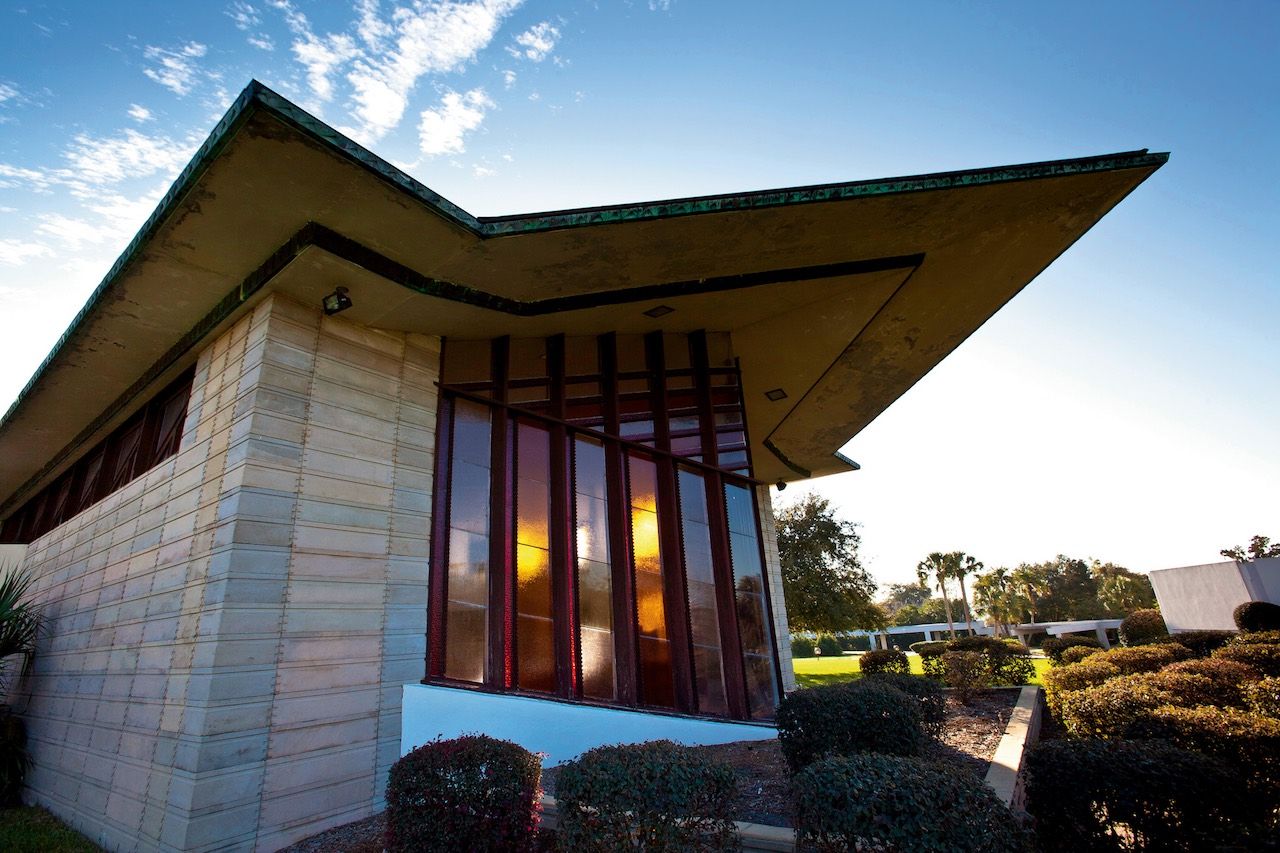 Florida Southern College is home to the largest collection of Wright structures in a single place. It also has a permanent display of Wright’s photographs, furniture, and drawings, each illustrating his relationship to the Lakeland college.

How did this come to be? In 1938, Florida Southern’s then-president asked Wright to transform the campus. Wright did so by designing 18 stunning examples of his organic architecture, 12 of which were completed during his lifetime. From the crisp lines of the college’s Annie Pfeiffer Chapel to its low and lean Usonian House, you’ll see plenty of Wright’s work here. To get in on the action, Florida Southern offers a variety of FLW tours, from self-guided walks to an in-depth 2.5-hour immersive look inside every Wright structure on campus.

6. Throwing it back, Old-Florida style

This isn’t castles and rollercoasters — Circle B Bar Reserve is a taste of real Florida. Polk County officials have restored this 1,267-acre former cattle ranch to its original marsh state, making it a haven for alligators, waterfowl, and wading birds of all feathers.

Here, you can fish Lake Hancock, cycle miles of paved and unpaved paths, or take a hike along the 2.5-mile Alligator Alley Trail, which winds through the marshlands beneath trees draped in lacy tendrils of Spanish moss. You may not see Mickey, but you’re sure to see squirrels and heron, and maybe even a distant bobcat if you’re lucky.

7. Hitting some of the best golf courses in the world 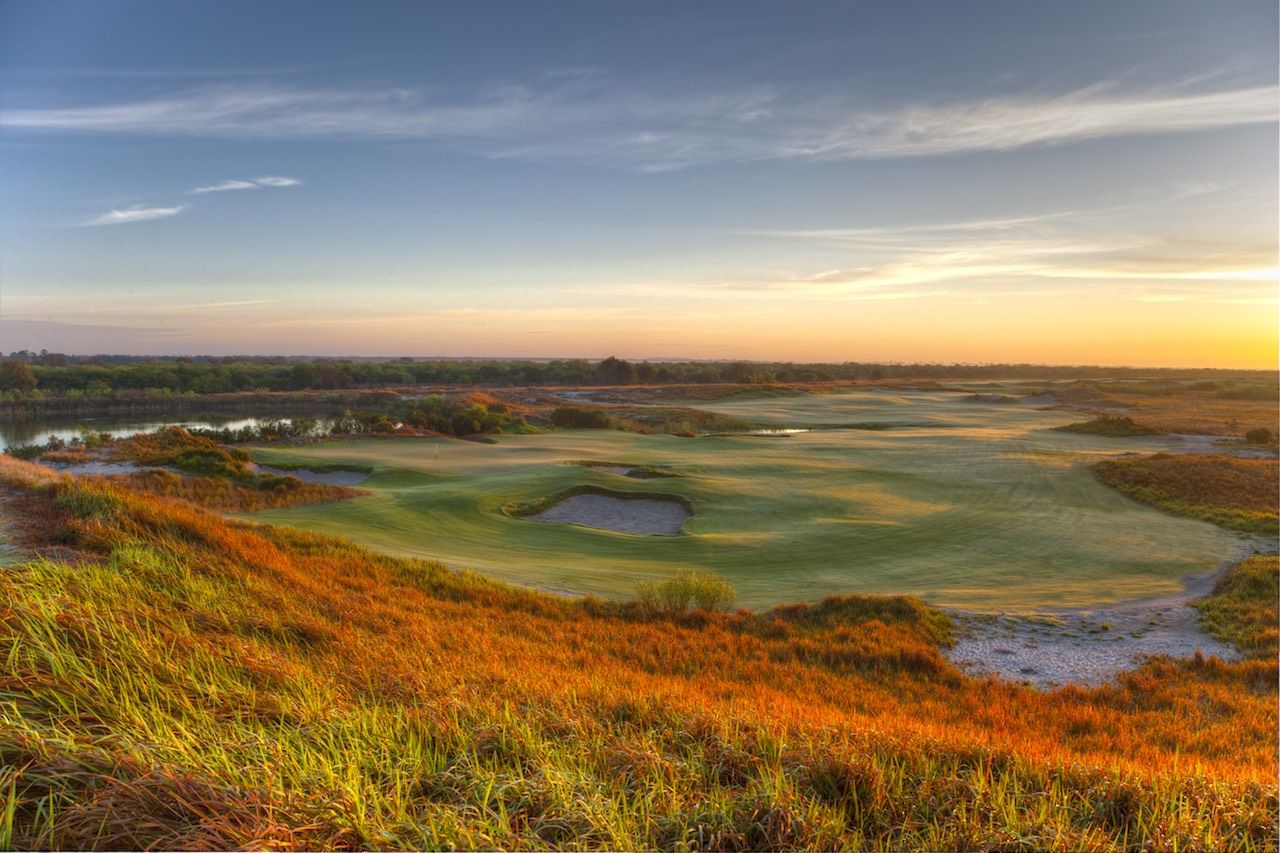 The publication’s praise continued when it named the resort’s freshly minted Streamsong Black course among its “Best New Courses for 2017.” Add to that a full-service spa, sophisticated accommodations, and plenty of outdoor activities (from sporting clay shooting to fishing to archery), and you have the makings of an unforgettable retreat.

8. Putting some swing in your spring 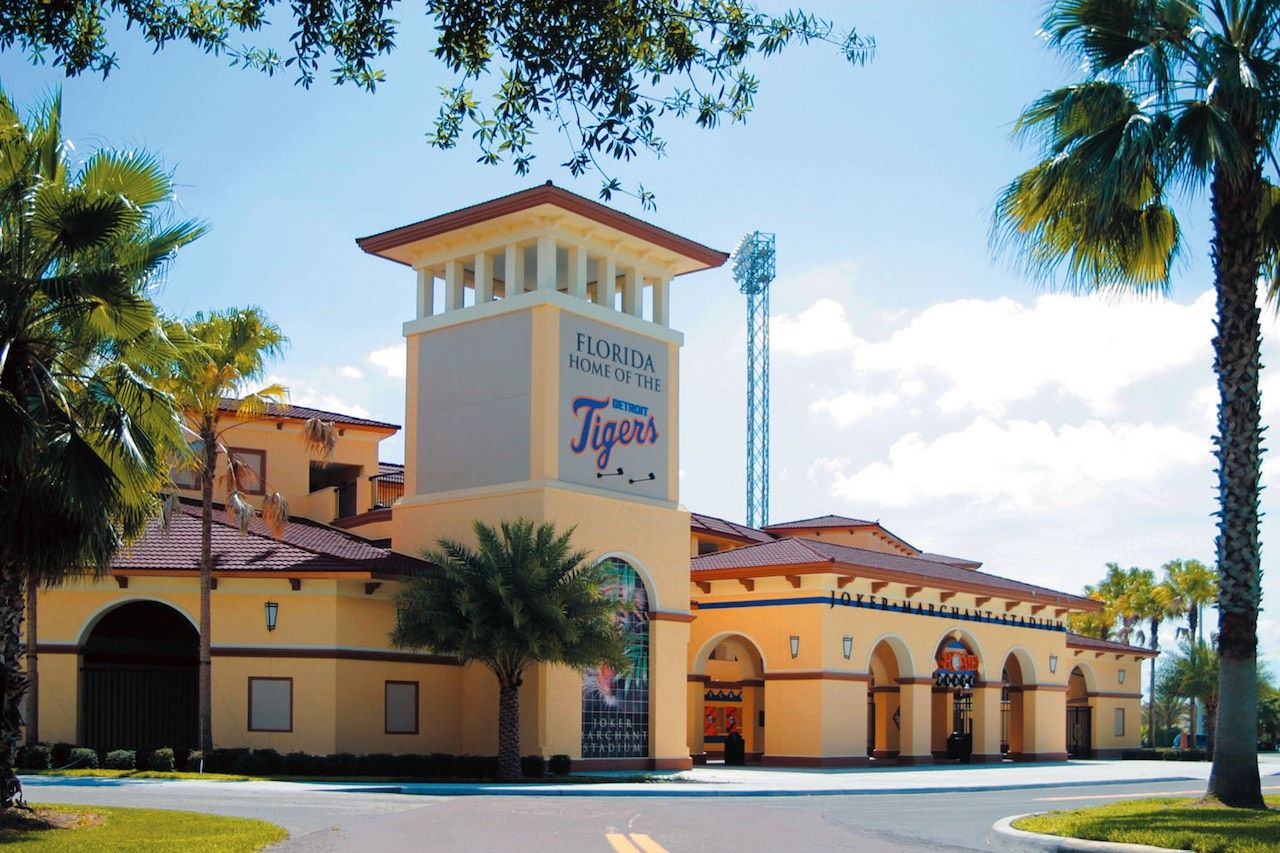 The peanuts and Cracker Jack start flowing early in Central Florida. You have the Houston Astros’ and Atlanta Braves’ Spring Training home in Orlando, along with the Yankees, Phillies, Blue Jays, and Pirates in the Tampa area. But don’t overlook Lakeland, the Spring Training home of the Detroit Tigers. They’ve called Publix Field at Joker Marchant Stadium, aka Tiger Town, their spring-home-away-from-home for decades, and that’s not going to change anytime soon — the complex completed its most recent renovation in 2017, a $40 million update that will keep the Tigers in Lakeland for years to come.

So schedule your trip to Central Florida sometime in February and March, and you can take your pick of any of the 15 nearby teams. But keep in mind that in 2016, Spring Training attendance broke records — consider downloading the Florida Grapefruit League app to get started planning ahead of time.

9. Revamping your definition of “going to the park”

A short walk from downtown Lakeland, Hollis Garden is a tranquil escape within a tranquil escape. It sits within Lake Mirror Park, Lakeland’s crown jewel and the centerpiece of this charming little city. Whatever you’re picturing, up your expectations exponentially — think descending a grand staircase into 10,000 flowers, music escorting your trip down the butterfly trail and to the shores of Lake Mirror.

The park’s neoclassical architecture is another reason this place is so popular. Stroll the palm-lined lakeside promenade, past the ornate loggia that tie the surrounding streets to the lake below. Play and picnic at Barnett Family Park, home to a playground, splash pad, and theater. This may technically be a low-key day…but it certainly won’t feel like it.

10. Taking Florida’s mountains for a ride 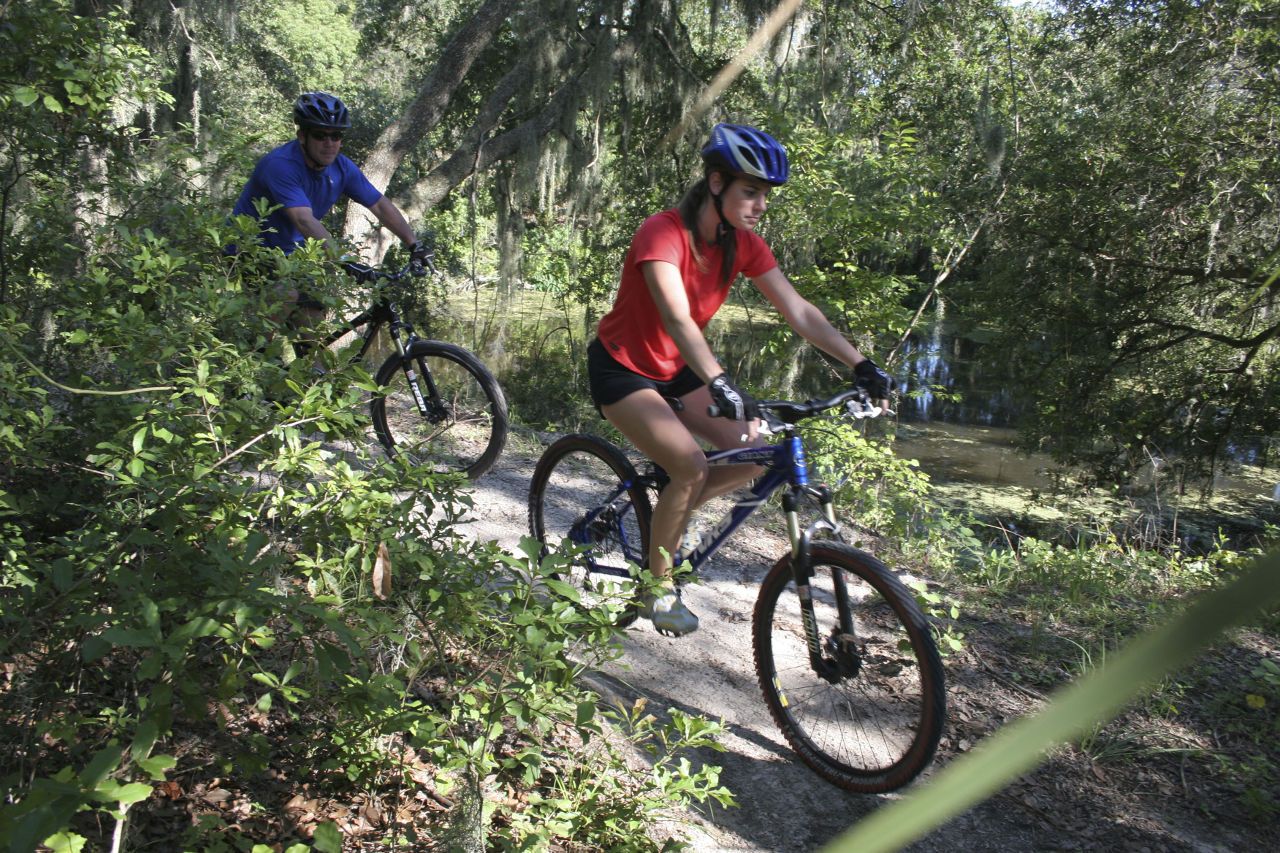 The miles of dirt and boardwalk mountain-bike trails at Loyce E. Harpe Park in Mulberry offer more than 200 feet of elevation change. If you know anything about the Sunshine State, you know that’s saying something — that’s practically Everest by Florida standards. 200 feet!

The single-track trails wind through old mining lands, offering a unique look at the state’s geography as they crisscross up and around hills, over knotty roots, and under the moss-cloaked limbs of sprawling oak trees. If you forgot your bike, there are plenty of rental companies in nearby Lakeland, and Loyce E. Harpe is also home to a dog park, fishing, and softball, baseball, and soccer fields. What’s more, Lakeland is one of 242 Bicycle Friendly Communities in the country recognized by the League of American Bicyclists. In Central Florida, there’s no excuse not to get outside and get exploring.

This post is proudly produced in partnership with Visit Central Florida.
Tagged
Travel Florida, United States
What did you think of this story?
Meh
Good
Awesome

Apple AirTags Helped Recover a Bag With $15,000 in Jewelry That Was Stolen From Baggage Claim