DINING ON A frozen sea in Sweden. Ploughing through feet of snow while cross-country skiing in Finland. Staying at the world’s northernmost ice hotel in Norway. In the winter, Arctic Europe looks like a scene straight out of Narnia — frozen waterfalls, snowcapped pines, and thick layers of white are in practically every view.

Forget hiding indoors until the sun comes back out, scraping your car windows, and lamenting closing the doors on your summer closet. The colder it is here, the longer the list of adventures. Here are 10 you certainly won’t find back home.

1. Sleeping in an igloo 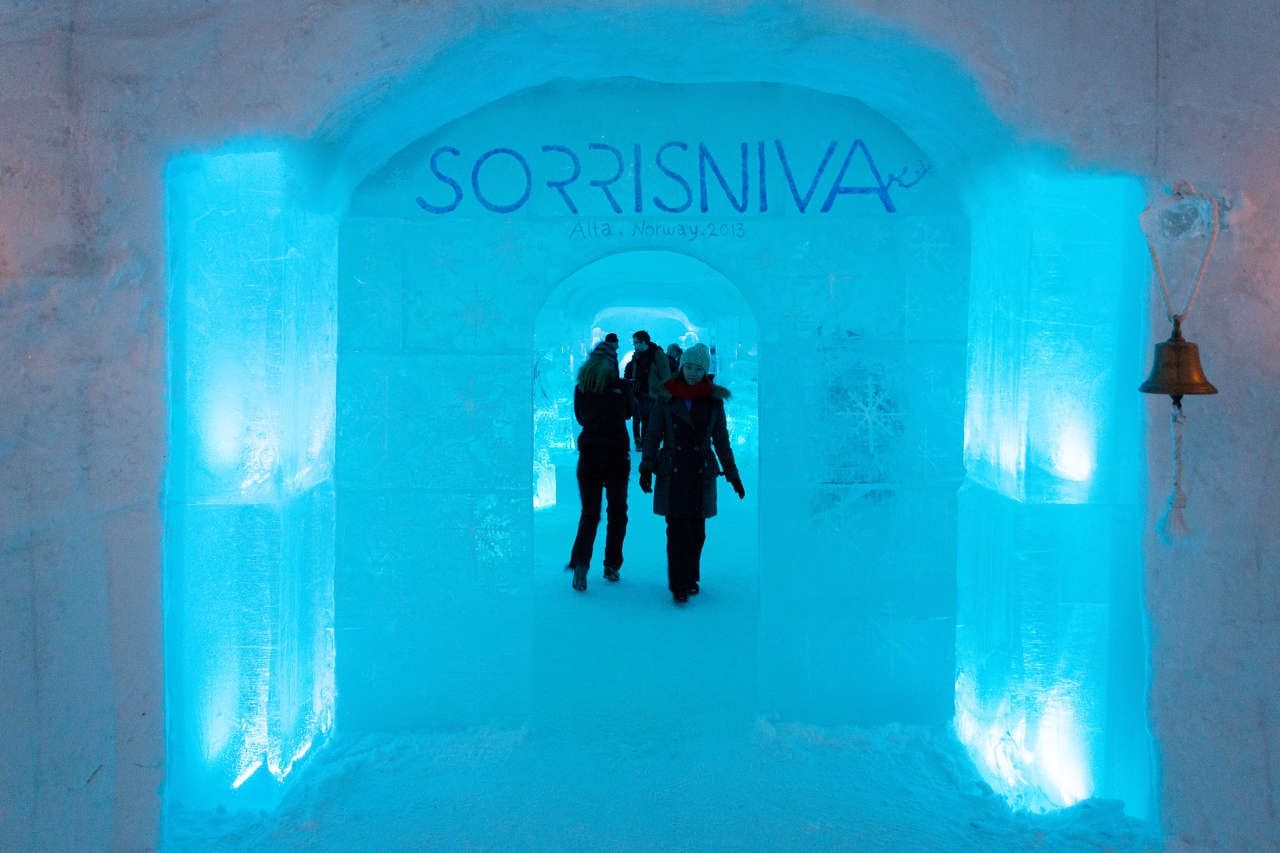 A normal hotel is where you sleep and nothing more…but this is no normal hotel. You’ll lie in bed staring at the ice ceiling, snuggled deep into your sleeping bag (that can handle temps down to -15°F), spending ages totally transfixed by the steam coming out of your mouth. You’re not dreaming — this is the Sorrisniva Igloo Hotel (27,000 square feet of ice and snow), and it’s the northernmost ice hotel in the world.

Sorrisniva is open from the middle of December to the beginning of April, but it’s certainly not the only ice hotel on the block. ICEHOTEL near Kiruna, Sweden, is possibly the most famous, but the Arctic SnowHotel (in Rovaniemi, Finland), shouldn’t be missed, either.

2. Dog sledding through the Arctic 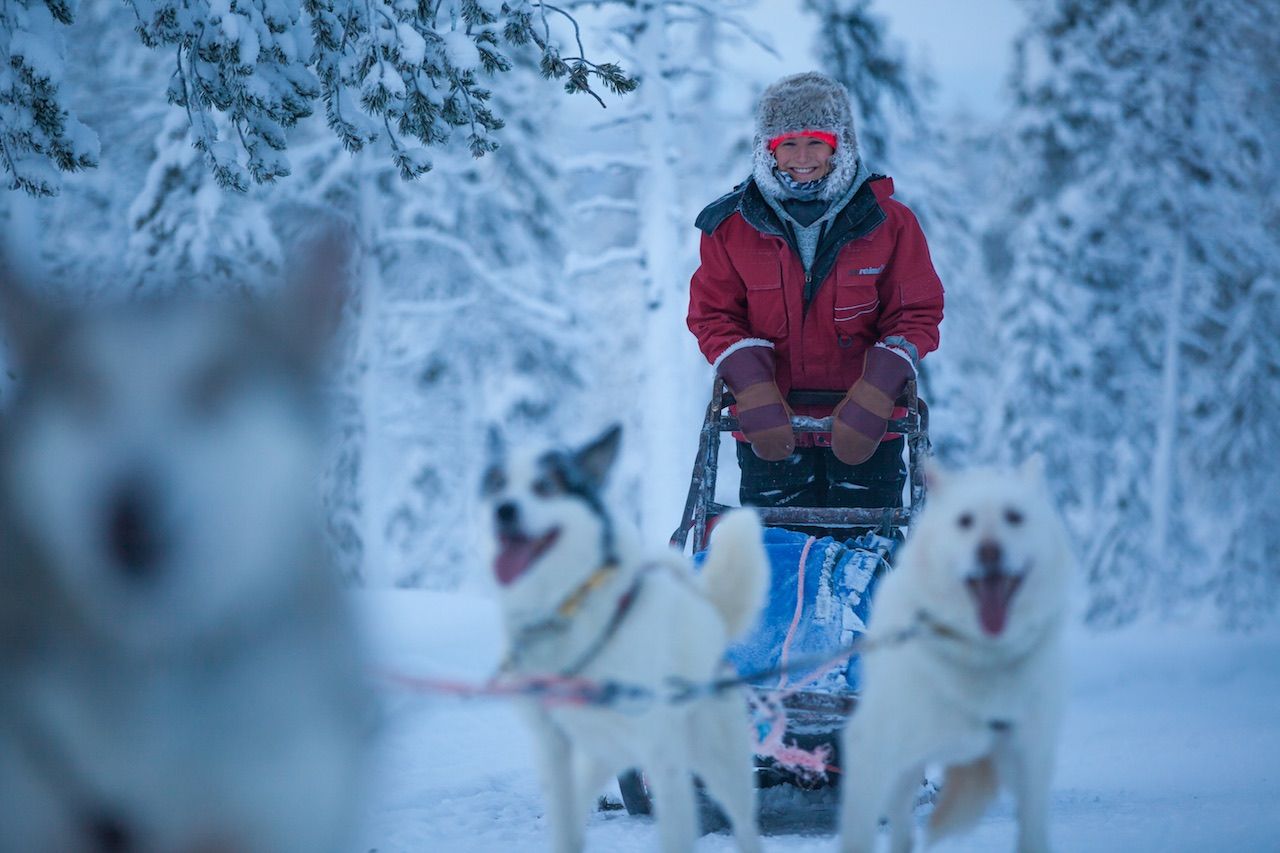 Energetic Huskies, a sled, pine trees, fresh water, and plenty of snow and cold air to kick your body into gear — really, that’s all you need. A camera is optional, but recommended. After all, when’s the next time you’ll be caught sitting on a reindeer hide behind four extra-fluffy dogs running through the winter wilderness?

At places like Harriniva and Cape Lapland in Finland, along with other spots around the region, you can arrange multi-day expeditions. You’ll cross lakes and rivers, help take care of the dogs, and stay in basic cabins — more likely than not, without electricity or running water (this is no five-star resort). But you’ll get a more authentic showering experience in the sauna with a bucket of warm water, anyway (doing it just like the Finns do!). 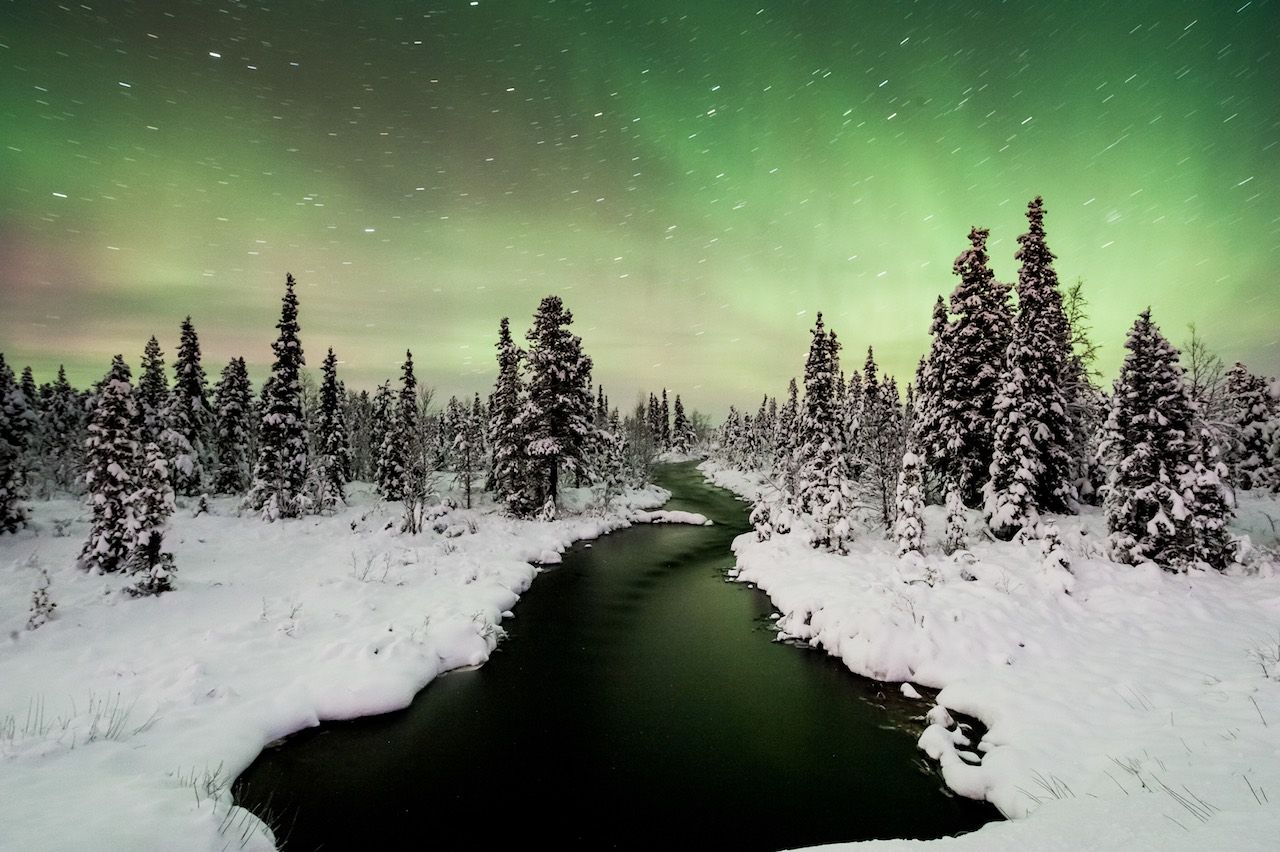 With air so clean you can smell the freshness and very little light pollution, Sweden’s Aurora Sky Station — less than three miles from the tiny village of Abisko (one supermarket and 85 inhabitants) — is one of the best places to watch the Northern Lights, or aurora borealis.

To do it, fly into Kiruna Airport, get on bus to Abisko, and stay at Abisko Guesthouse. Sitting in the chairlift that takes you to the top of Mount Nuolja, 2,953 feet above sea level, means you have something absolutely blow-your-mind spectacular to look forward to. The lights — greens like Poison Ivy from Batman or Superman’s kryptonite, purples more luminescent than the Cheshire Cat in Alice in Wonderland — look like a rendezvous between space and Earth. There’s no guarantee you’ll see the lights (it’s nature, after all), so make sure to stay at least a few days to increase your chances.

But keep in mind that wherever you are in Arctic Europe, your light-spotting chances are good. Just make sure to stop whatever you’re doing and look up — even in towns and villages the ribbons can be caught skirting across the sky.

4. Eating a three-course dinner on a frozen sea 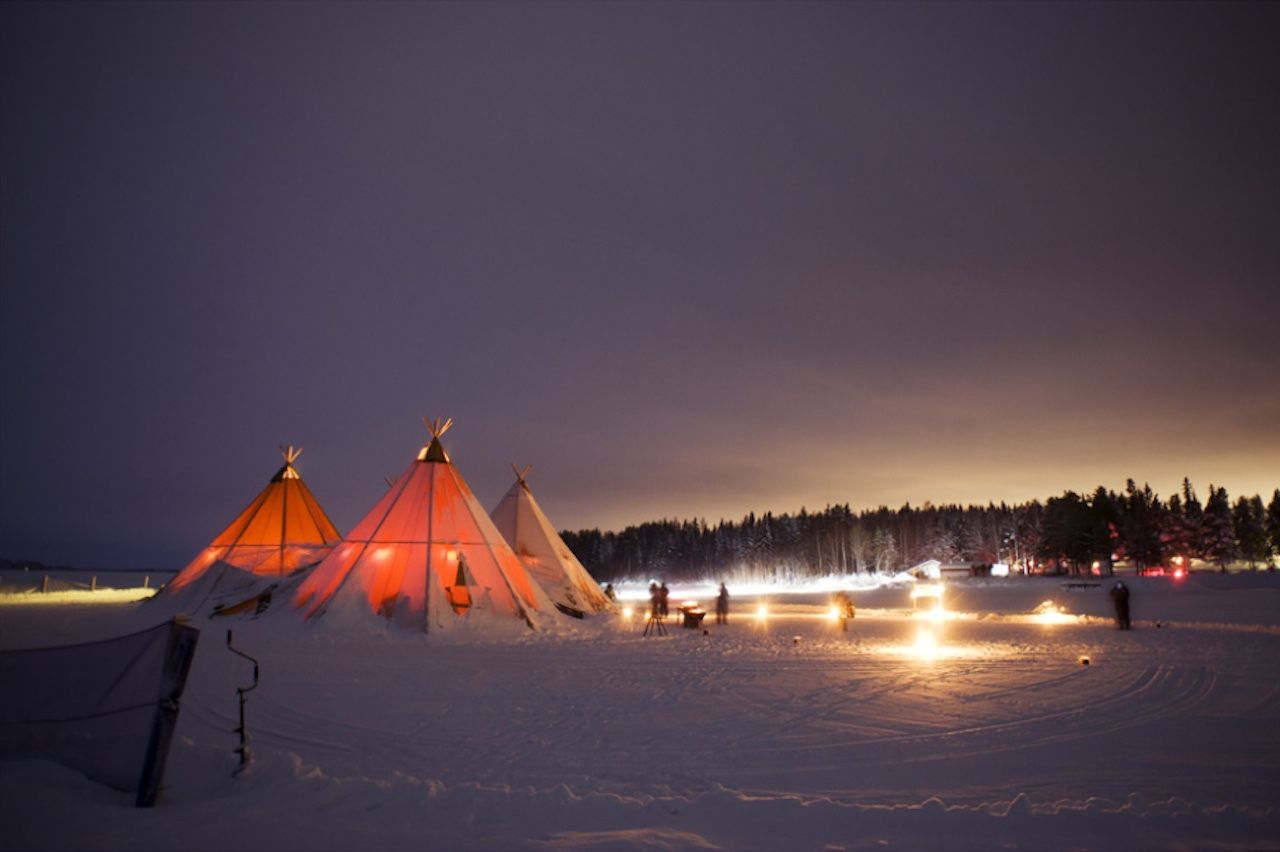 Disney on Ice? Close. This is dinner on ice. Brändön, Sweden, offers the chance to dine on the frozen Bothnian Bay. You’ll have to walk out onto the ice to get to the lávvu tent, your makeshift restaurant for the evening, but there will be more than enough thickness under your feet. Just listen to the snow crunch, and take a moment to look up at the millions of stars in the sky.

Once you reach the tent, sit at the table on your reindeer hide, take in the white tablecloths and candlelight, and get to work on your three-course dinner — comprising local ingredients like reindeer meat or salmon. Warm yourself by the fire, and make sure to sneak out once or twice during dinner to catch those stars again. Nature always has the final word, but this ice dining experience is normally available from the beginning of January to the end of March. 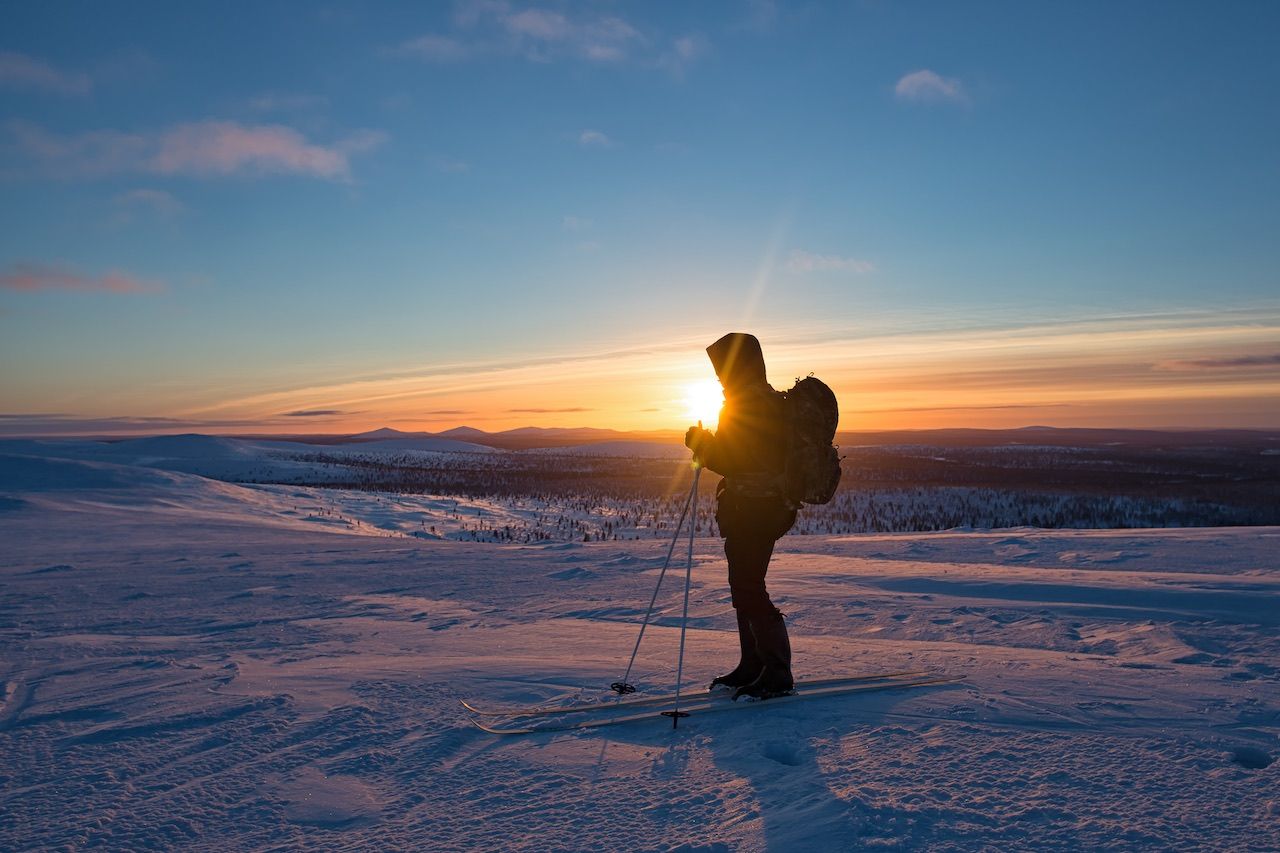 Forget about the long lines, lifts, and Jägermeister shots associated with skiing of the downhill variety. Cross-country skiing is all about locomotion and serenity. You’ll float through the snow, passing pines and fallen birch, breathing in the frosty beauty of Arctic Europe. That’s it. That’s all you have to do.

Near the Russian border in Finland, Nellim Wilderness Hotel is a good spot to try out this traditional winter sport. You could do it on your own, but they have all the gear — snowsuits, gloves, and, of course, skis, so you don’t have to schlep everything around yourself. That being said, there are thousands and thousands of miles of trails here to conquer — wherever you are, the opportunity won’t be far away. 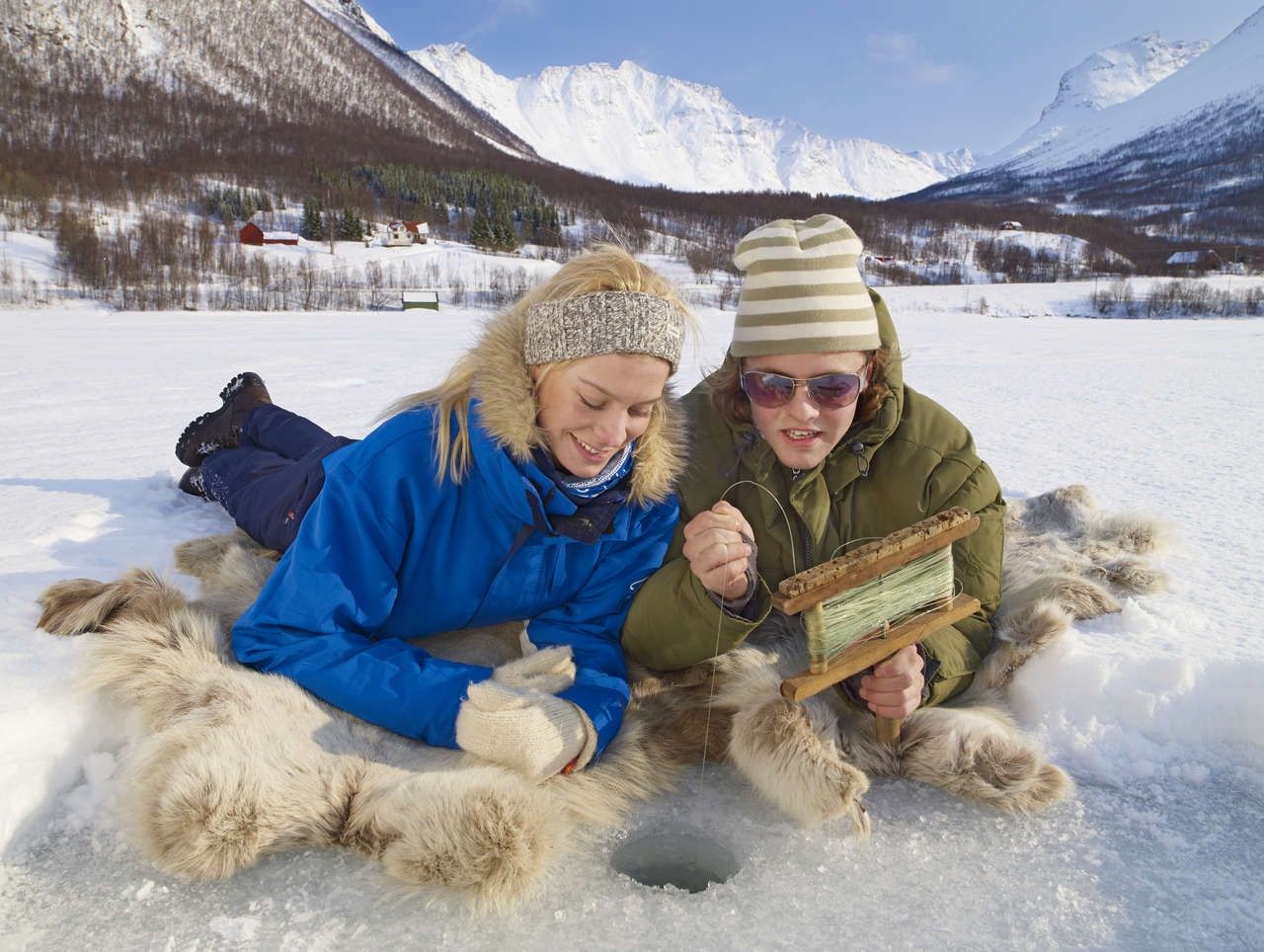 If there’s one thing your friends probably haven’t done on their adventures, it’s head out to a frozen lake and fish for Arctic char, a hardy freshwater fish that adapted to the harsh conditions after the last Ice Age. The best time for ice fishing is between March and May, and in winter you can get to pretty much any point on any lake in Nordkyn, Norway. Lake Kjæsvannet is a popular one, but look at Nordkyn’s map and you’ll see literally hundreds to choose from (lakes abound in Sweden and Finland as well). Pick one, pack your wool tights, wrap up in plenty of layers, and grab your fishing gear.

Before heading out, stop by Gamvik Museum and get your fishing license. Bring food, a thermos of steaming hot coffee, and lots of water. And, of course, fishing gear: ice rod/reel, ice auger and skimmer, a bucket with a lid for whatever you catch (and to sit on), ice jigs, ice picks, and a life vest. Most importantly, bring plenty of patience — it’ll probably come in far more handy than actual fishing expertise.

7. Hopping aboard an icebreaker 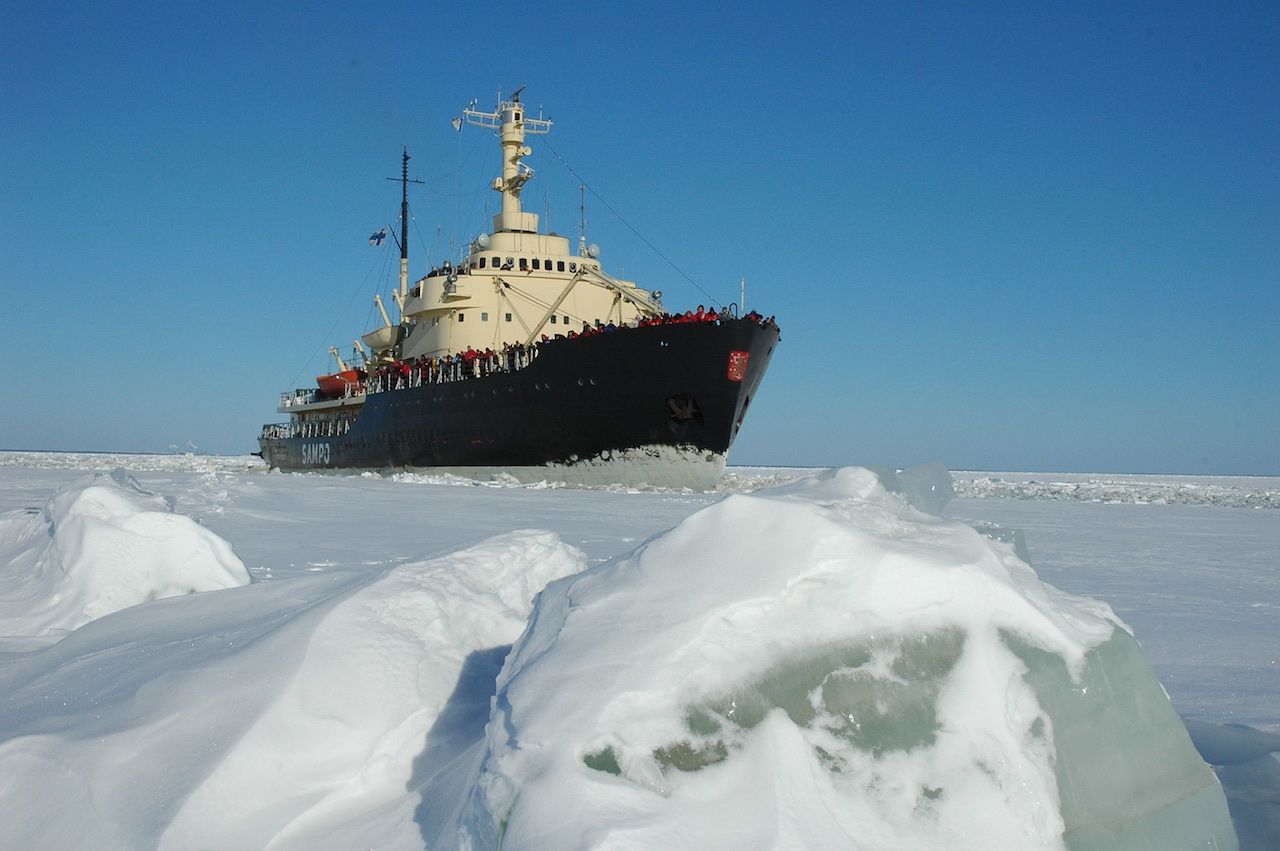 If ever there were the opposite of a standard cruise — the kind with margaritas and rows of crowded sun loungers — this would be it. In northern Finland, you’re invited to hop on the Sampo, an “icebreaker” (the vessel kind, not the party kind). Stand on the deck and watch as tons of steel crush through ice in the Bothnian Sea, visit the captain’s bridge, and take in the juxtaposition of bright blue sky and bright white ice.

And then, jump in. Yep — the staff will provide you a bright red survival suit (with built-in flotation), and you get to take it all in from the nearly-frozen water. The ironic part here is that the water is actually less cold than everything else — otherwise it’d be ice, too. It’s totally safe, and the vantage point is so stunning you won’t even be thinking about the cold.

8. Snowmobiling through the Arctic backcountry 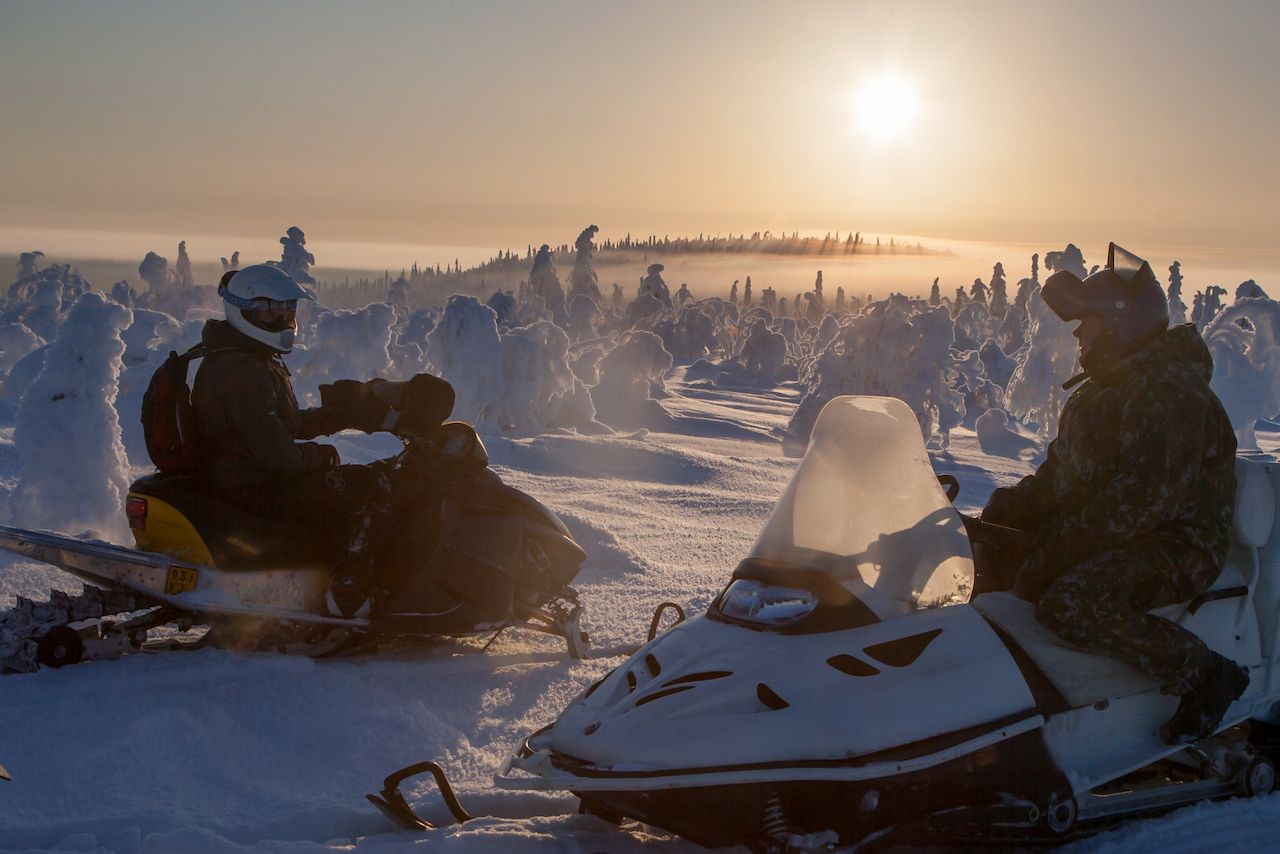 Cruising at 40mph through snowy pine forest on the edge of a mountain range is like being cast in the winter version of The Fast and the Furious. You probably won’t look as intimidating as Vin Diesel in your helmet and mittens, but you’ll probably feel like him. At least for a few minutes, when you’re accelerating through the silvery forest 100 miles north of the Arctic Circle.

With the adrenaline pumping and the cold air hitting your face (which feels colder the faster you drive), it’ll be like you’re reaching some high-speed nirvana. Let Lapland Safaris take you on a guided snowmobile safari, or rent your own — though make sure to check national regulations beforehand if you’re going solo (and remember: brake on the left, throttle on the right).

9. Experiencing the magical combination of sauna and ice 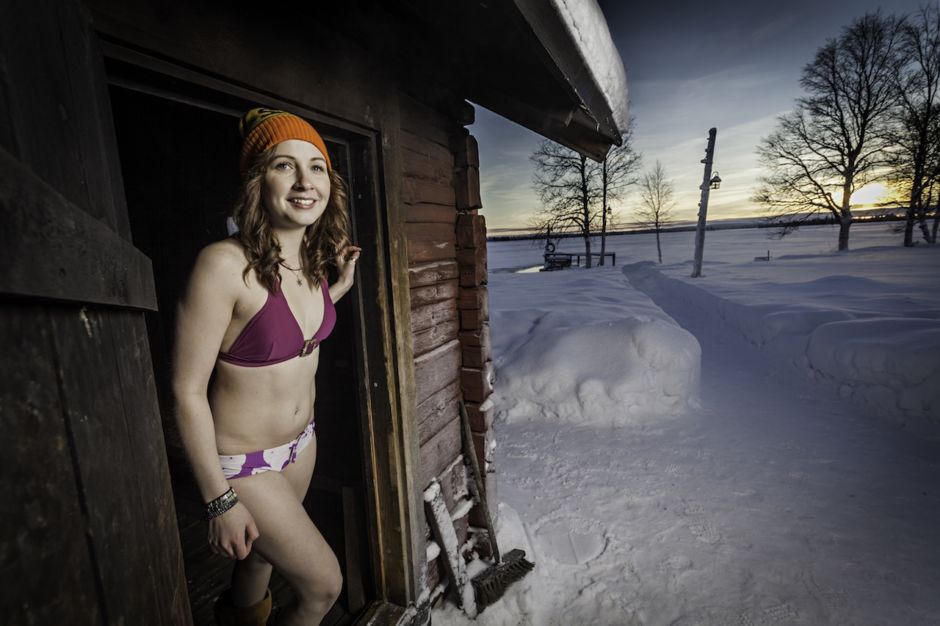 Finland invented the sauna, and it’s since become a lifestyle — some even partake daily. When you’re here, you’ve got to experience it. There are a few basic rules — shower first, partake in the nude (though you’ll likely be given a towel), don’t chat unless your host does, etc. — but you’ll catch on quickly. And once you feel adequately heated up, take a dip into the nearest pool of icy water.

Seriously. This is not for the fainthearted and, whatever you do, don’t put your head under. Winter bathing is serious business, and getting into almost-frozen water in a hole on a frozen lake or an ice-cold river is both painful and numbing — first it hurts, and after a couple of seconds your arms and legs feel numb. Thirty seconds, tops, in the water. Tops. Just enough to experience it, and maybe get just a tiny bit cleaner.

The water temperature can be as low 30°F in Skellefteå (home to the Scandinavian Winter Bathing Championship), but here’s the point of the torture: Once you’re out, a rush of endorphins takes over your body. The sensation is incredible. And after that frosty shock, getting back into that steaming hot sauna is pure bliss. 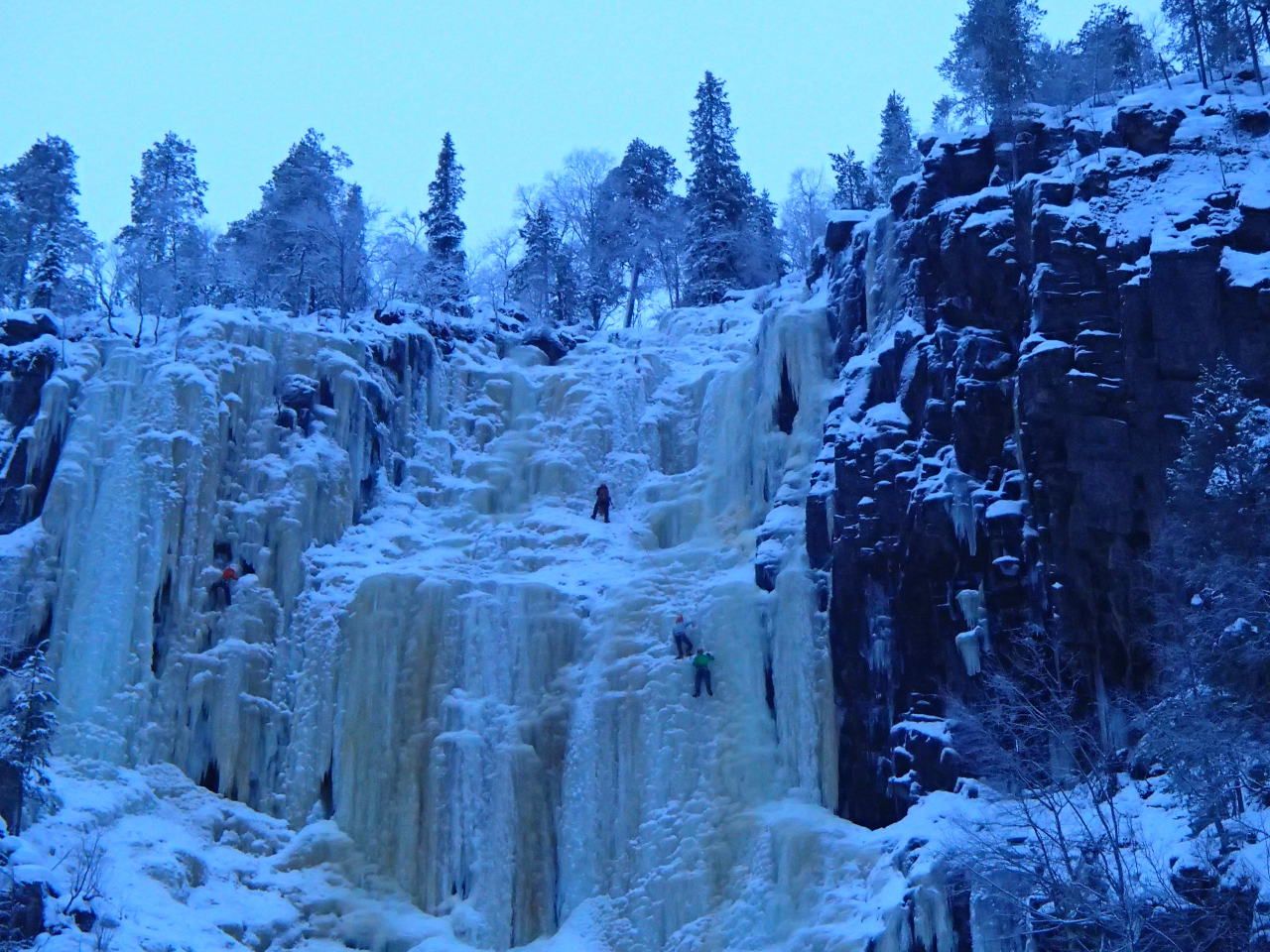 Frozen waterfalls are incredible to look at — now imagine climbing them. Finland, Norway, and Sweden all have them, but a solid suggestion is Korouoma Nature Reserve (in Koillismaa, Finland). Here you can work your way up the frozen falls in Korouoma Canyon, a 20-mile fracture valley hundreds of millions of years old. All you need is a harness, helmet, ice axes, crampons, and climbing boots (and a guide — this isn’t something you should try without experience).

Remember, it’s all about the legs — just like in rock climbing — so you gotta get the balance in your lower body right. Don’t look down if you’re scared of heights while climbing, but definitely do so once you reach the top. You’ll feel utter satisfaction, pride, and awe when you take in the much-deserved view over the winter-clad canyon.

This post is proudly produced in partnership with with Finnish Lapland, Northern Norway, and Swedish Lapland.
Tagged
Insider Guides Finland Norway Sweden
What did you think of this story?
Meh
Good
Awesome

Sweden Is Now Home To the World’s Biggest Gaming Center