WHEN I WAS OFFERED the opportunity to help my friend sail his Bristol 27, Cigana, from Saint Lucia down through the Grenadines one winter, I took it. Because, why not? That’s how we should treat every opportunity to get out on the ocean. There’s something about living in an environment that’s completely unstable, completely unpredictable, that shows us who we really are. No matter what our jobs are back home on land, our job on the ocean is to know the elements, know the weather, know the vessel that’s getting us where we want to go.

The power of the sea requires a shift in perspective, and giving way to it — respecting it — allows you to grow. Here’s what I’ve learned from my time spent growing up near and living on the ocean.

1. Letting go of your boundaries will allow you to feel a closeness to other people. 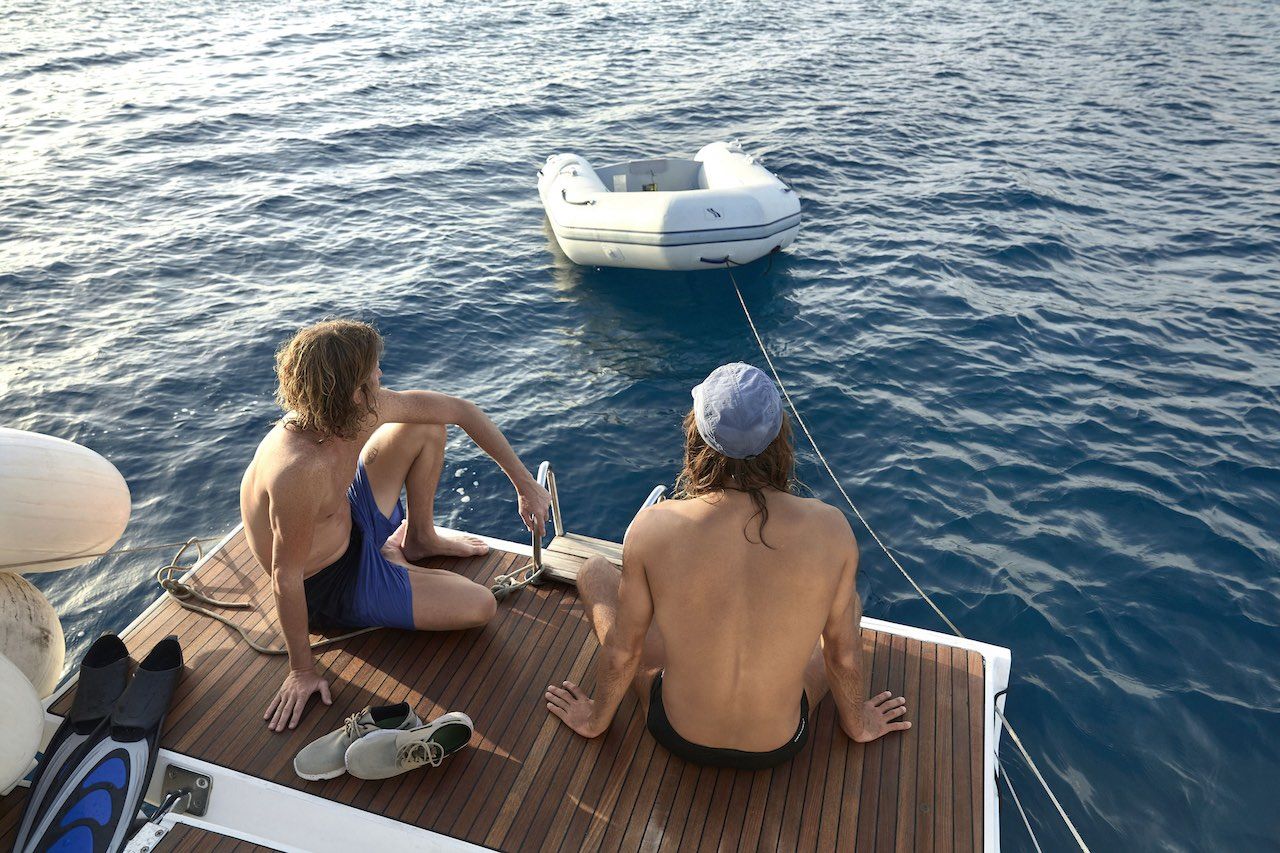 Even the largest cruise ships are confined spaces. Spending time on the ocean almost always means spending time within close proximity to other human beings. Cigana was a precisely 27-foot space, and my friend and I were often not the only people in it. As soon as I stepped aboard, I knew I was going to have to let go of some personal boundaries. There was no head. There were no private quarters. Every surface you could sit on became someone’s bed after 11pm. I couldn’t change, brush my teeth, or shave my legs without jamming my elbow into my friend’s ribcage. Maybe it sounds like I was living in a prison, but the experience actually freed me of a few things.

On land, we keep safe distances from other people. Living in a restricted space, floating on top of an immense sea, brought me a sense of community I believe many humans have lost in modern times. Every space I had access to also belonged to someone else; therefore, I had to learn how to be more aware of my body and more respectful with my actions. I also settled into a routine with my friend that struck me as probably not dissimilar from the routines of early human civilizations. We cooked meals together, played music together, and told each other stories at night.

I realized that extreme closeness to other people, yeah, it can be difficult. But when it’s all you have, you’ll see how that human closeness is something you’ve been missing on land.

2. Mother Nature is capricious, and She rules all. 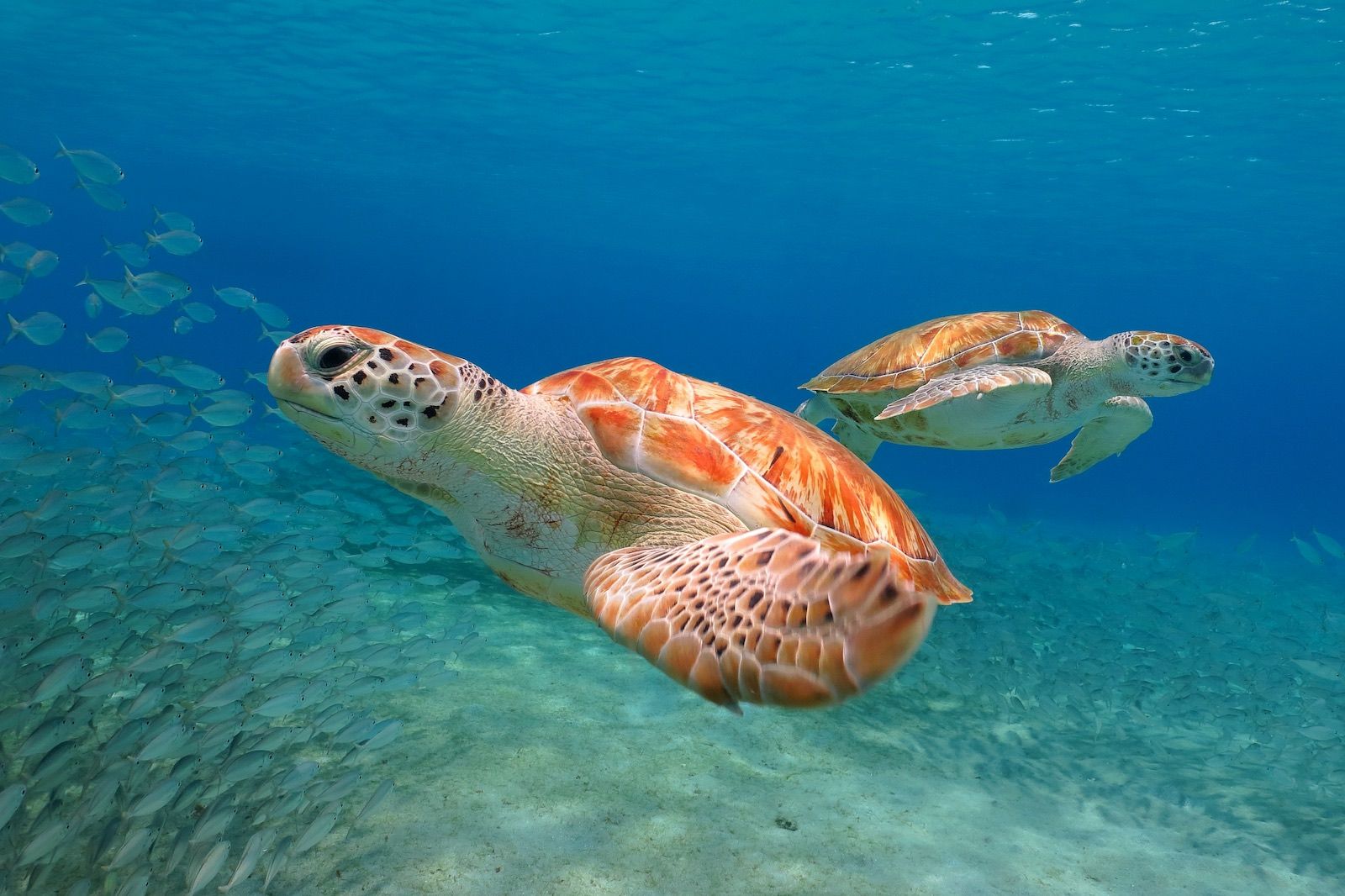 On land, there is shelter. If the wind picks up suddenly or the rain starts to fall, it’s just a matter of getting yourself inside. Living on land doesn’t require as deep a connection to the elements as living on the ocean does. When you’re on a boat in some of the deepest waters of the Atlantic, every shift in natural energy directly impacts your world.

The first time Nature made me feel powerless, I was swimming with a friend not far from a national seashore beach in Cape Cod. We thought nothing of swimming out over our heads, into the waves. But soon, the swells became so high we lost sight of each other between them. In that moment, I didn’t panic, although I did feel fear. I remember being in awe of how the world just shifted without any notice. As I let the waves propel me safely back to shore, I felt humbled by the power of Mother Nature.

3. We truly are addicted to technology.

Data towers don’t exist in the middle of the Atlantic Ocean. When I lived on Cigana, I didn’t have a cell phone. There was no Instagram or Facebook. Siri couldn’t update us on the weather, and Google Maps couldn’t tell us where to point the bow. Instead, I learned how to read a nautical chart, how to speak effectively on a CB radio, how to tie an Ashley stopper knot, and how to coil my line on the dock in the most aesthetically pleasing way.

During the first few days of that journey, yes, there were times when I wondered what the rest of the world was doing and saying on Facebook, when I wanted to show everyone back home a picture of the yellowfin tuna I’d caught or the new friend I’d made. But all that passed. And when it came time to return to life on land, I held on tight to how freeing it felt to exist without the pull of technology. Years later, I still pride myself as being someone who’s often without her phone.

4. The human body can do amazing things.

I wasn’t a strong swimmer when I boarded Cigana. I couldn’t even dive back then. The first time I really had to step up my game was when I let my friend’s shirt float to the bottom of a harbor we were anchored in. “Why don’t you get it?” he said, and then promptly rowed into shore, leaving me to the task. The water was so clear I could see his shirt down there, but I didn’t think I’d be able to hold my breath long enough to retrieve it. But I also couldn’t just fail at the challenge he’d given me. I devoted all morning to building up my breathing capacity, and after a few hours of getting a little bit closer, turning around, trying again, I was finally able to grab it.

Living on the ocean forced me to use my body to its full capacity. I was the one responsible for pulling up and dropping the 40-pound chain attached to our anchor. And when that anchor was in place, we both needed to have the ability to dive the 14 feet down to check on it. There were no luxuries on this very small boat — we could never afford a mooring or a slip, and there were no fancy automatic gadgets to help us out. Everything was done manually, and most of it required a decent amount of strength. Even our dinghy was a motorless rowboat. But we always got it done.

5. Overpacking could be a metaphor for our modern lives. 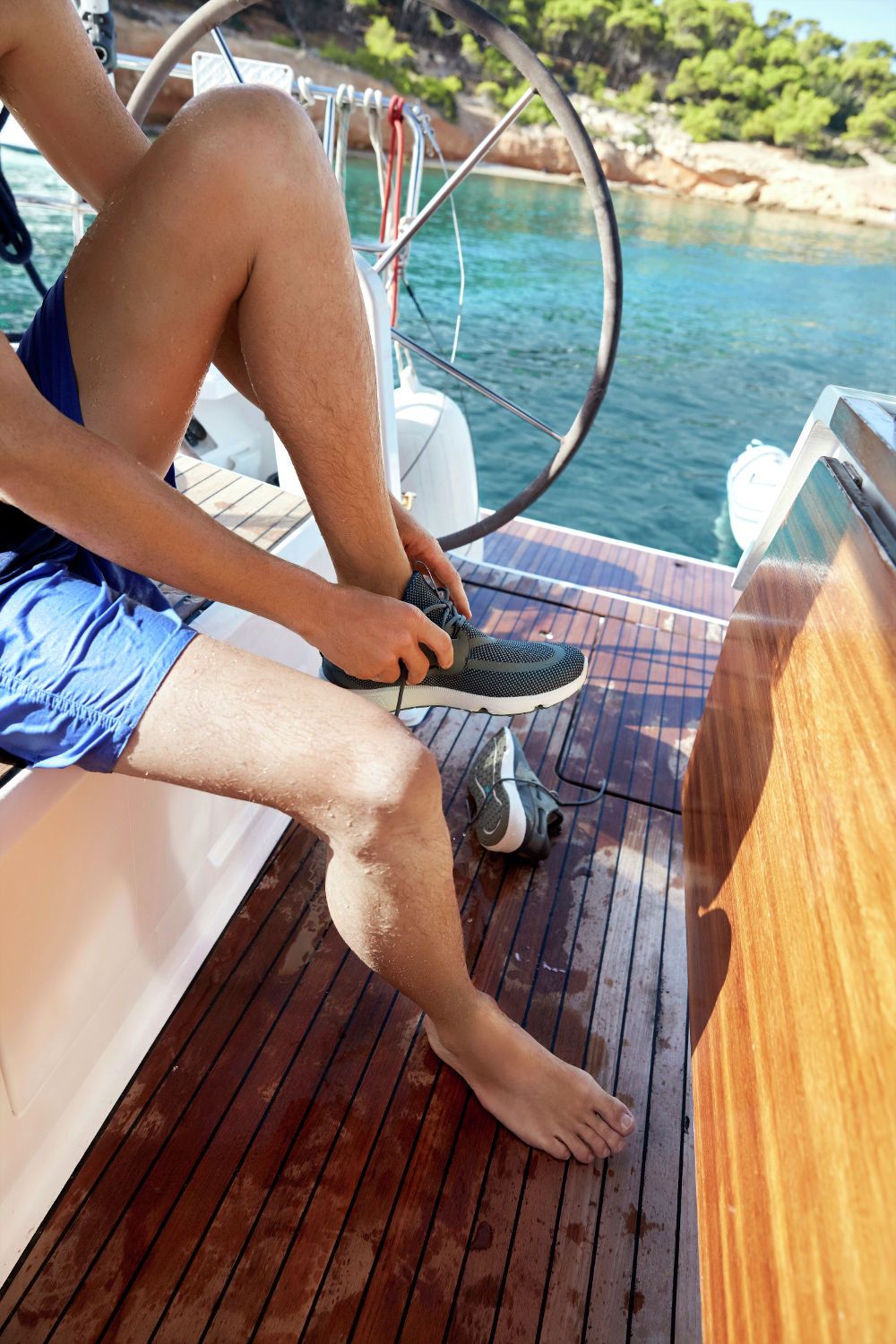 When I moved onto Cigana, I came with a massive backpack filled with useless crap — multiple sweaters for the Caribbean heat, wool socks, a pair of sneakers I never wore. By the time I left, the only thing I had in my backpack was a raincoat and a 25-pound coconut trunk drum I bought from a guy on Union Island.

Before I got on the water, I believed I needed so many things to survive, but being on the ocean taught me to live simply. Depend on yourself, your crew, and your vessel — not the seven different bikinis you think you can’t do without. Pack light…but also pack smart. A versatile pair of boat shoes and a change of clothes — that should do you.

6. The environment needs to be respected and protected.

There’s still so much we don’t know about the world’s oceans. When our boat made a pass from Saint Vincent to Bequia, we cruised over water so deep my friend claimed it was a common area for hammerhead sharks. Throughout my travels on the water, I’m often entranced and a bit unsettled by the dark world going about its business beneath me. Under the ocean’s surface, there are highways, hierarchies, mountains, canyons, and great walls of coral.

We often forget about the intricacies of the ocean when we live on land, and our waters have suffered because of it. Getting out on the ocean will not only prove how vast and beautiful our marine environments are, but also how much impact humans have had on them.

7. You’re either an observer or a joiner. 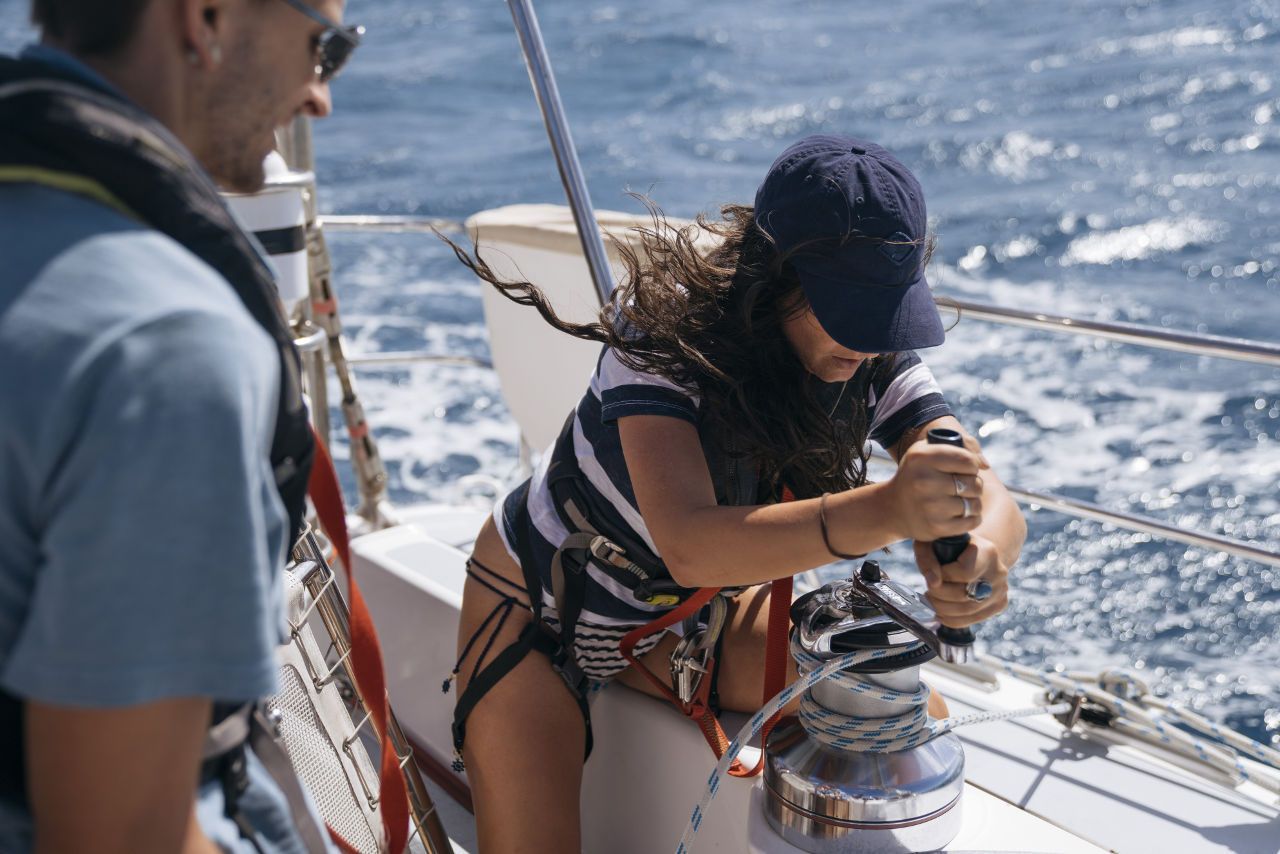 When you’re living on the sea, there’s always something that needs to be done. No matter what kind of vessel you’re in, it comprises a lot of moving parts. A lesson you quickly learn: You’ve got to just join in and help. A boat underway is not the right place to be afraid of a new task.

Before I lived on Cigana, I was someone who liked to hang back and observe my surroundings before I jumped into them. But when I became my friend’s only boat crew, I was forced to learn each and every job, usually on the fly. I didn’t want to be responsible for steering — the one time I tried, Cigana did a complete 180 somewhere between Bequia and Mustique — so I opted for most of the active work. It was my job to let out sails, trim them, cleat off lines. I developed a routine and, over time, I owned it. Every time I scrambled to the bow, first on my hands and knees and eventually on my bare feet with a little bit of grace, I felt pride in myself for agreeing to become a joiner.

8. The weather is actually a pretty interesting conversation topic.

Because it impacts every part of your life on the ocean. On land, you might talk about the “unseasonably warm winter we’ve been having” when you don’t have anything else to say. On the ocean, you’re often asking what those predicted winds are going to do to your sail from Canouan to Union, or, more importantly, how they’re going to impact your one and only shelter in this vast seascape. You feel every little change in weather when you’re out on the water, so you learn how to respect and predict the elements.

9. Learning to fix something is an invaluable skill. 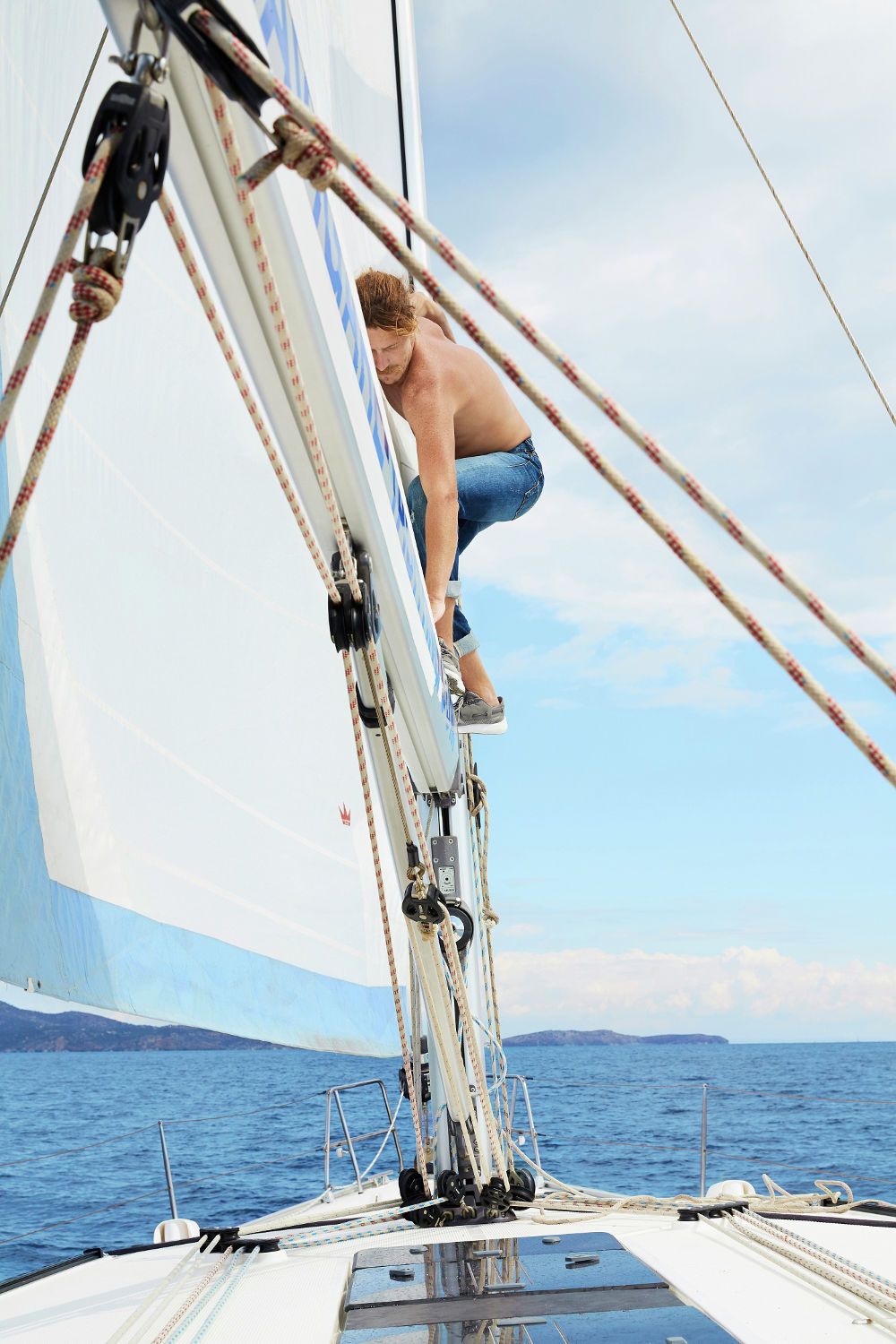 On land, we often depend on someone else when something breaks or goes wrong, but you can’t Yelp the nearest mechanic when you’re living on a boat. There’s so much value in learning how an outboard motor works, how to replace propane lines, or how to construct a more effective antenna for your CB radio. Fact: A can of WD-40 and some duct tape is all you need to get a lot of things shipshape again. And when that works out for you, it’s a beautiful feeling.

Along with my multiple sweaters and wool socks, I also brought a bag of makeup onto Cigana. I quickly realized there wasn’t even a mirror on board, and that ended up being a positive. When you’re living on the water, there are so many things to pay attention to — your looks really shouldn’t be one of them. Eventually, the old routines I’d fallen into back home — of choosing the right outfit and prepping in the mirror before going out in public — just fell away.

Boat culture doesn’t require the latest trends in fashion or makeup. You’ll fit in better if you come as yourself.

This post is proudly produced in partnership with Sperry shoes.
Tagged
Travel
What did you think of this story?
Meh
Good
Awesome