If you’re not from out West, or haven’t spent much time here, you may have a vague notion of the California coast as a kind of paradise of outdoor adventure. Beefy waves crashing on fine sand rising into steep, green and gold hills, with super cool beach towns right in the middle of it all. If this is your mental picture of the region, you’re spot on — all that’s missing is a name. Welcome to Ventura.

Everything from the land to the sea to the dinner table is here and ready for action, tucked away in this seaside enclave not too far up the coast from LA. Start with these 10 ideas to get outside and get pumped, and you’ll see why Ventura deserves a dot on your mental map of iconic California.

1. Shouting “Thar she blows!” to a pod of whales 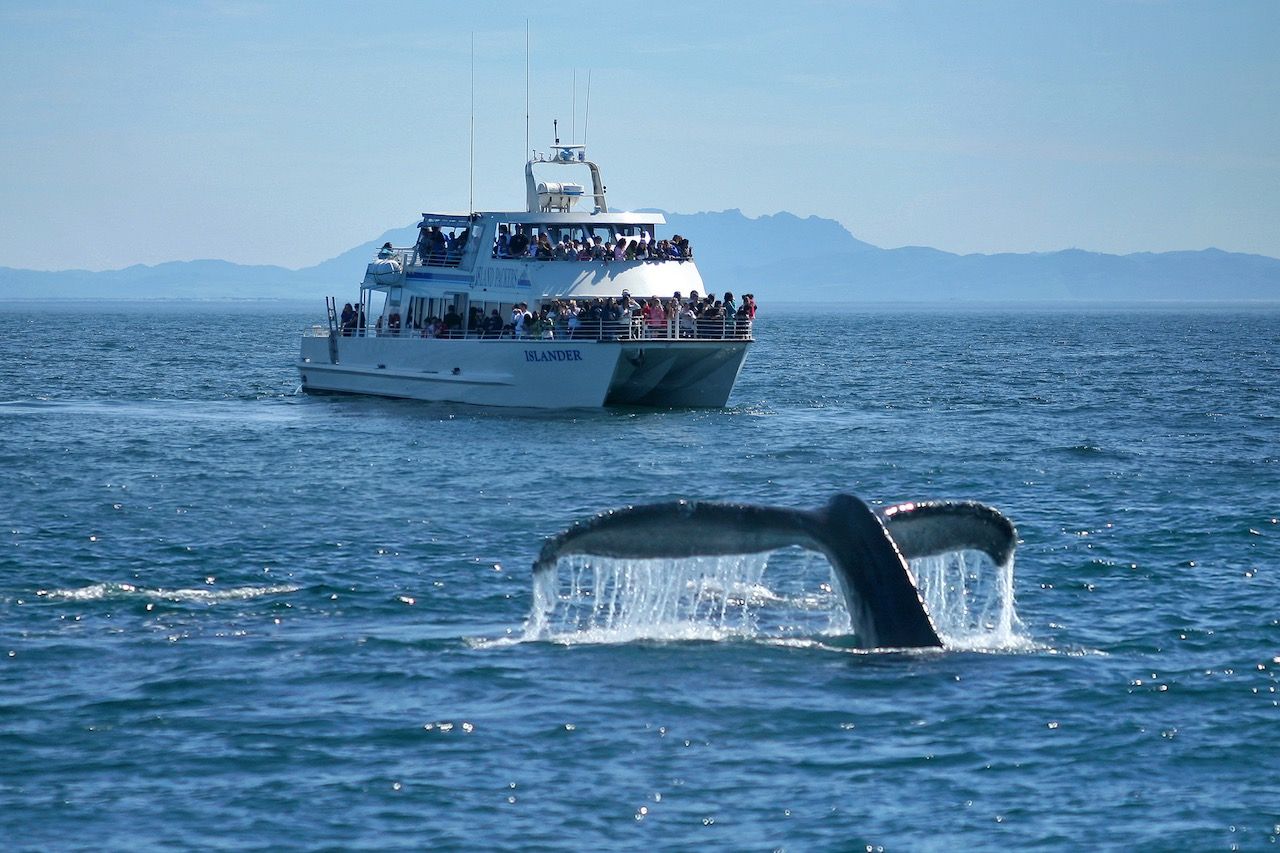 If you run into a herd of early risers lining the Ventura Harbor, they’re probably about to hop aboard an Island Packers boat for some hang-time with the whales that pass right by Ventura. It’s not uncommon to see blues, fins, humpbacks, and orcas here, as well as untold numbers of seals, dolphins, and over two dozen other critters as they feed in the waters off the Channel Islands.

Since you’re up so early anyway, join ’em. Just witnessing the majesty of a whale breaching and swimming with its pod is not something you’ll soon forget.

Channel Islands National Park — right off the coast of Ventura — is made up of five islands: Anacapa, Santa Cruz, Santa Rosa, San Miguel, and Santa Barbara. Though they’re not far from the mainland, the islands have had millions of years to become totally unique in their biodiversity and wildlife. An hour-long boat ride from Ventura will get you to Santa Cruz Island, where you can take a guided hike with a national park volunteer or head off on your own. Or both.

The bluff at Cavern Point offers an incredible view, and just below it you can camp overnight in pretty much the middle of nowhere. Bring in your own gear and supplies — there are no services available, but who needs ‘em when you’ve got the stars and the adorable island fox for company?

Note: Though this is a national park, Island Packers runs the boats to and from the islands. To get here, you’ll need to reserve a spot on an excursion via their website.

3. …and kayaking to sea caves while you’re there 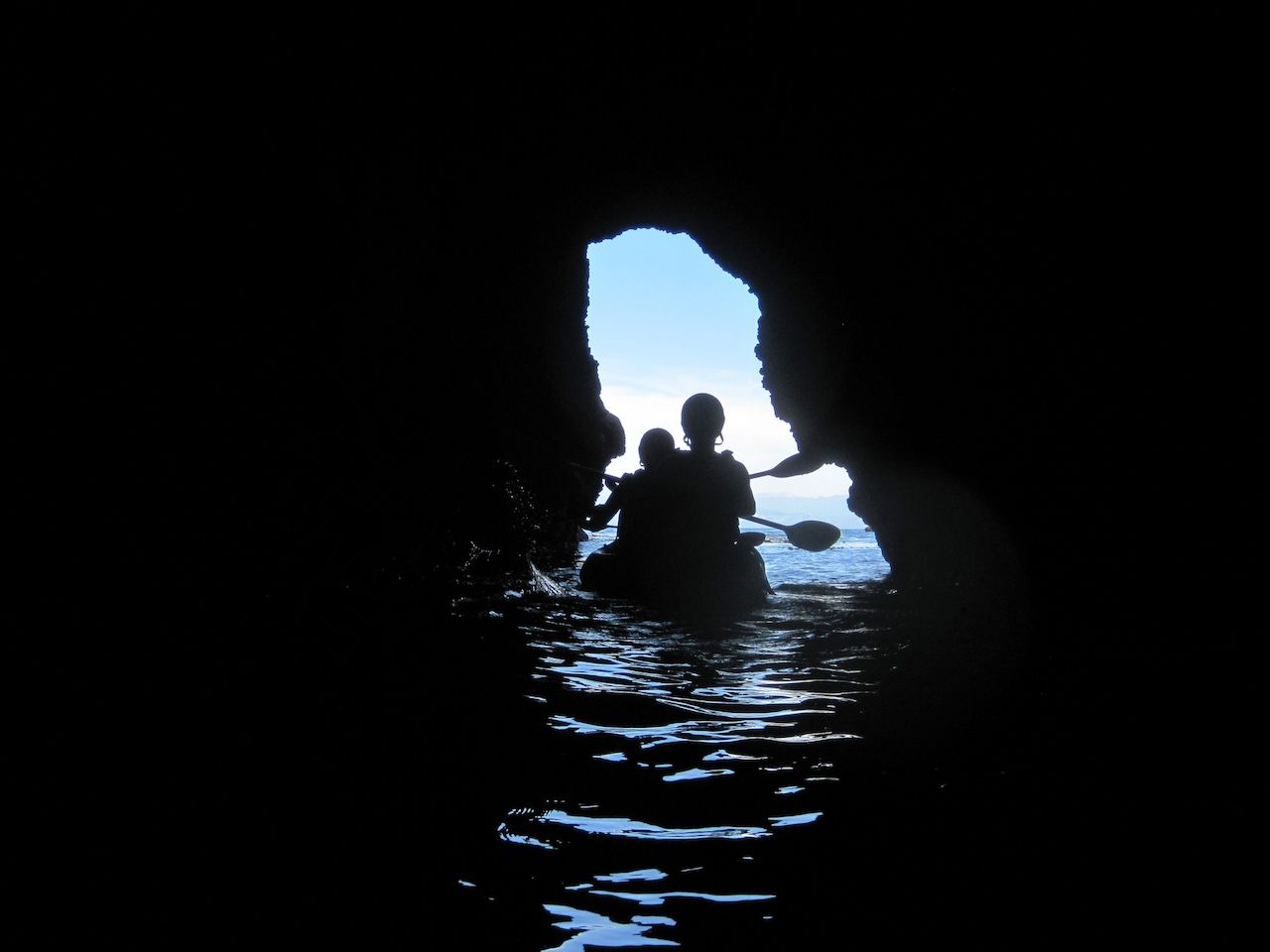 If you’re willing to put in a little elbow grease, you can (and should!) kayak around the Channel Islands’ sea caves. They’re as mysterious and beautiful as you’re picturing, yep, and they don’t require pro skills to reach.

There are guided excursions available, but for a self-guided kayak tour, you’ll want to stick to Santa Cruz Island. It has two popular spots for kayaking: Scorpion Anchorage, with a sand and cobblestone beach, is perfect for beginners, with access to the many caves and coves that make up the island. Prisoners Harbor has fewer visitors and access to coves for sea creature viewing, but it’s better for the more experienced.

Note: Island Packers can transport kayaks to the island, but a reservation is required.

4. Hopping on a bike and cruising the coast

How’s this for ready-made adventure? Grab a bike of your choice from the Ventura Bike Depot, and hop on the coastal bike path at the west end of Main Street. You might not realize it when you’re still in town, but the seaside journey has begun. Soon you’ll come to where the Ventura River meets the Pacific, a beautiful area that’s technically a wilderness park. Around the corner is Surfers’ Point (a popular surfing spot, photo opp, you-name-it opp) and the Ventura promenade, where you can walk the length of the Ventura pier, and take five to spot dolphins and other wildlife.

Turn around and check out the entire city in all its glory before hopping back on your wheels and passing through San Buenaventura State Beach. Make sure to stop for some oysters at The Jolly Oyster before the pedal back — a trip so nice you won’t mind making it twice.

5. Going on a hunt for the best Mexican food this side of the border 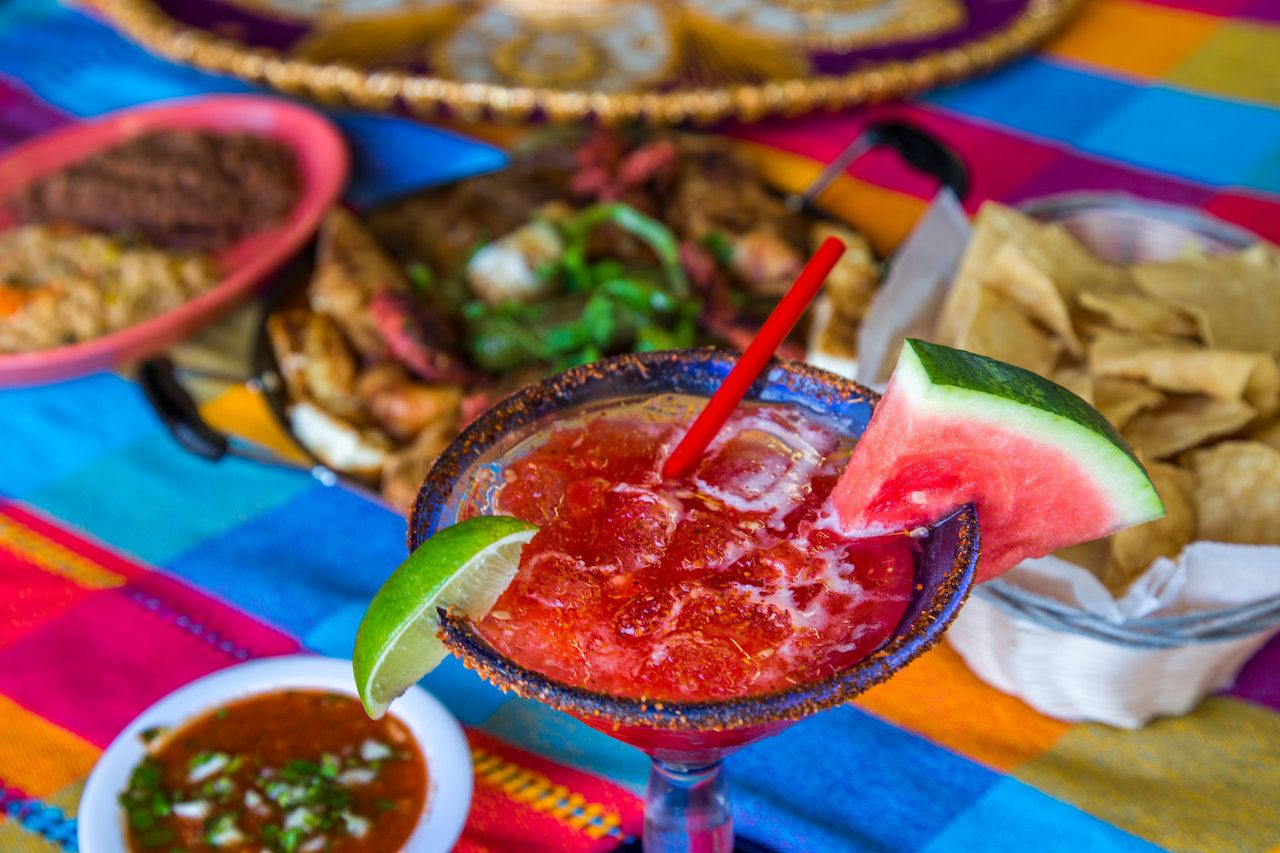 Mexican food fuels Ventura, and the Downtown/Ventura Avenue area is where aficionados of the cuisine like to chow down. Instead of a pub crawl, consider this a grub crawl. Start at Corrales (the homemade hot sauce is killer), and then scarf down a monster breakfast burrito on Lalo’s patio. Afterward, head to Ventura Avenue, aka the Avenue, the city’s original drag. You’ve only just begun.

Find where the Avenue meets Main Street and head north to Johnny’s Mexican Food. This is the place to stop for a true Ventura original: the corn burrito. Grab a michelada (think Bloody Mary with beer instead of vodka) at Taqueria Tepatitlan, and admire the local art on the walls. Follow it up with a stop at Ortiz Taco Time for off-the-charts carne asada, and finish up with a burrito or enchilada plate at Casa De Soria — locals line up for this place, so you know it’s legit. You came hungry, right?

6. Fishing from the Ventura pier

Nothing brings on the nostalgia like grabbing a fishing pole and heading down to the pier, Lassie in tow, with a bag stuffed with sandwiches — or, you know, since you’re not on an episode of Andy Griffith, grab your friends, a cooler, and do like grandpa did, only 21st-century style on the Ventura pier. He’d be proud.

Stop in at Eric’s Tackle Shop on Thompson Boulevard or Ventura Sportfishing at the Ventura Harbor, grab your gear — you can rent equipment — and book a day or even overnight excursion on a chartered boat. Or simply walk out and cast a line off of the pier, DIY-like. You’ve been saying you wanted to detox for a while, right? This is one of the best ways to do it.

7. Scoping birds with the Audubon Society

Ventura has a Mediterranean climate, meaning the weather rarely ventures into extremes in either direction — aka, it’s wonderful pretty much all the time. Birds know this and love it as much as the humans do, making use of the Ventura River to rest, nest, and preen for birding enthusiasts — or potential mates, whichever. Either way, whoever cares to take part in excursions hosted by the Ventura Audubon Society can reap the showy, feathery rewards.

The society runs frequent trips to the Ventura area’s many natural habitats, like Camino Real Park — its barranca is used as a corridor by migrating birds — and the Settling Ponds, where ducks, grebes, and gulls call home. 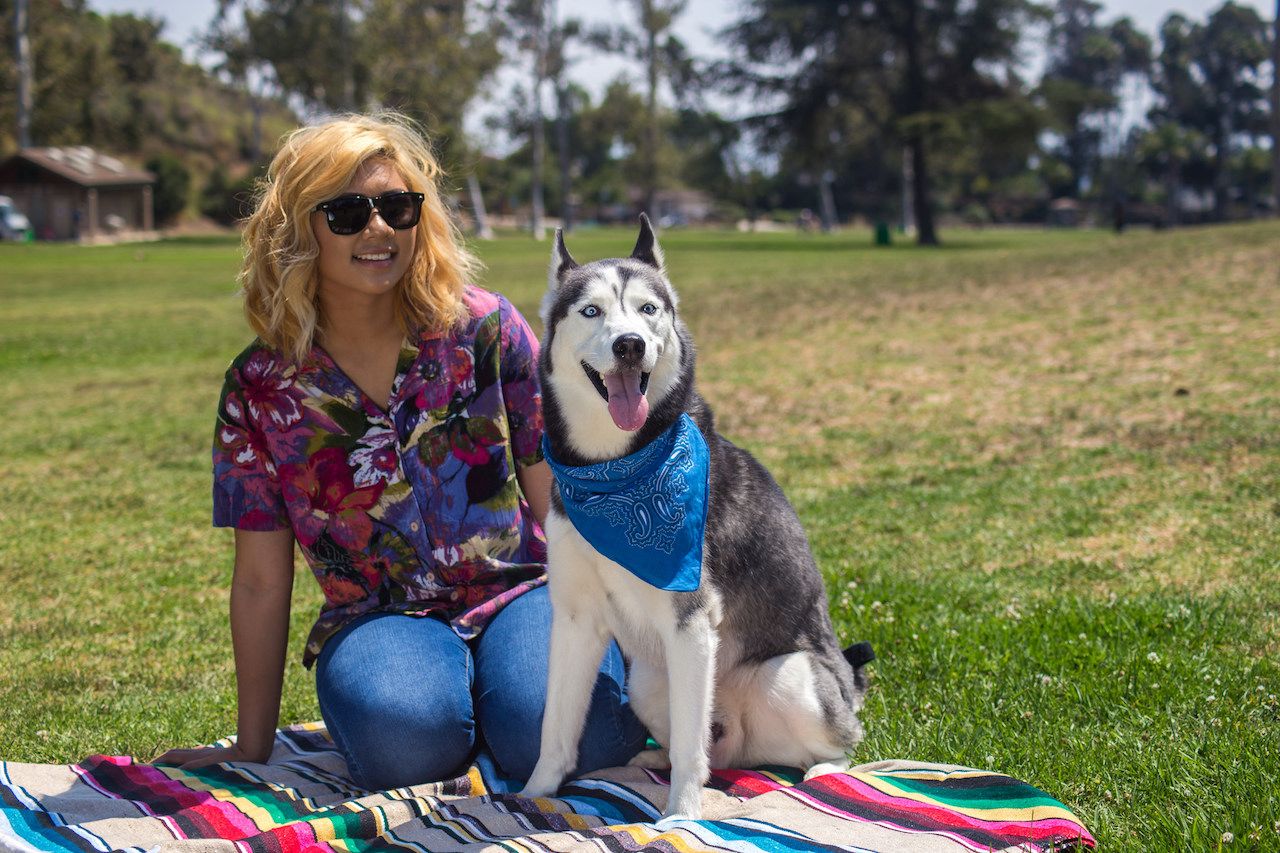 The 132-acre Arroyo Verde Park is incredibly popular with dogs, at least judging by all the bouncing tails and happy faces you’ll encounter here any and every day of the week. Their human counterparts don’t seem to want to stay away, either, especially on weekends — bring your furry travel companion along to romp with its fellow canines, and don’t forget your running shoes so you can take a tour of Ventura’s wild side. On the edge of the park are several popular hiking trails that’ll take you up the city’s hillsides (so your workout is as good as Fido’s).

9. Surfing with the pros 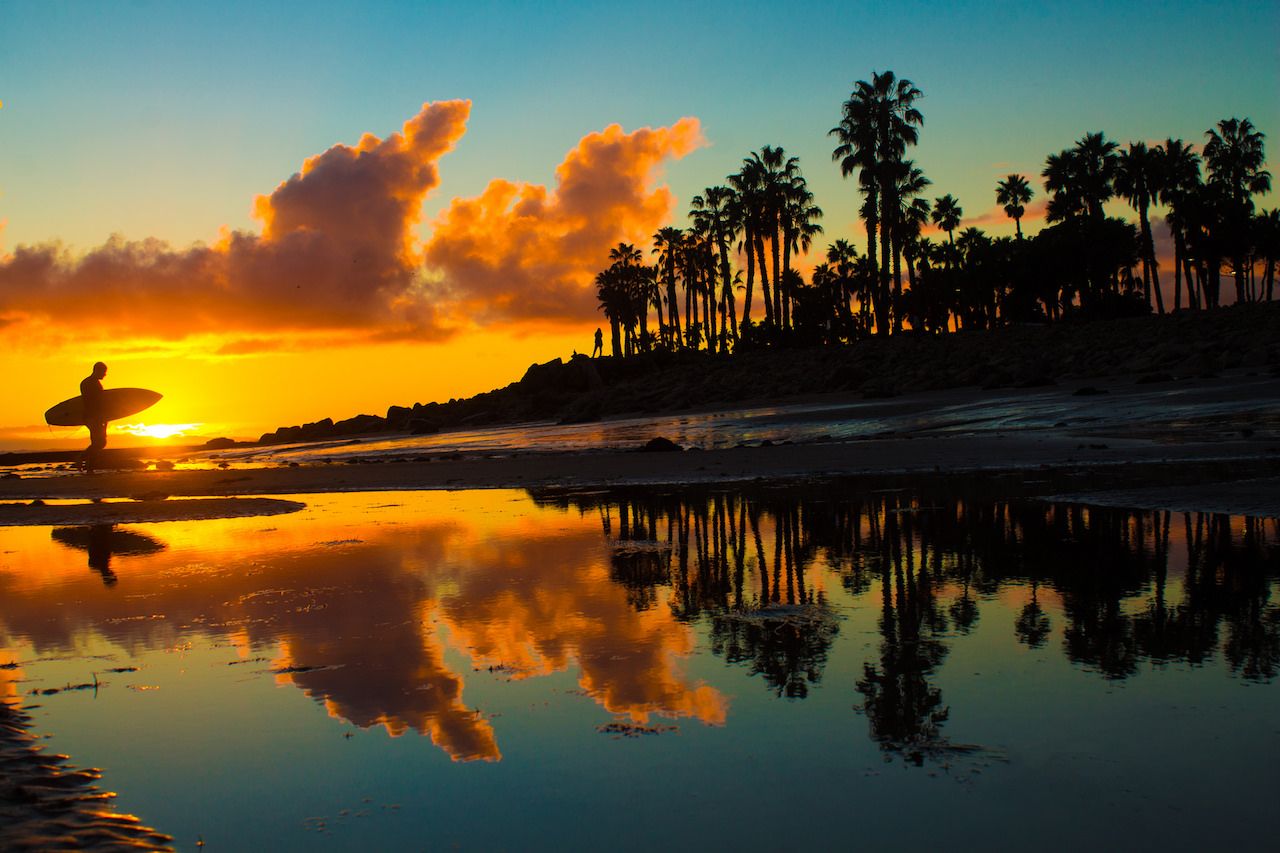 Ventura has seen surfing superstars like Timmy Curran and Matt McCabe shred the waters off its coast, and tons of others have followed in their almost-literal wake. If you can manage a decent barrel roll and can hang a full ten like a pro, hit up Emma Wood State Beach; if not, no worries — try the more mellow waters at Mondos not too far away.

Surfers’ Point, near downtown Ventura, is a popular spot to catch a wave early, too. And if you’re in it for the spectating, it’s a fantastic spot to watch surfers bobbing (or biffing) in the morning mist.

10. Going on a thrift store safari along Main Street

Ventura is the place to be for thrift store treasure hunters. Along Main Street, tucked between top-notch restaurants and fashion boutiques, you’ll find the best of ’em, all operated by nonprofits in the name of various charities. Get lost in the controlled chaos, don your safari hat, and get digging — next to the plate emblazoned with a portrait of Santa Claus sits a stein with your name on it. A little unexpected piece of Ventura to call your own.

This post is proudly produced in partnership with Visit Ventura.
Tagged
Travel
What did you think of this story?
Meh
Good
Awesome

The 7 Coolest Local Shops in Ventura, CA You Should Check Out

17 Reasons You Should NEVER Take Your Kids To Ventura, CA

Ventura Might Just Be the Most Underrated Beach Town in America. Here’s Why.

11 Incredible Experiences You Can Only Have in Ventura, CA