ARCTIC EUROPE IS adventurous by definition. Heading up north is about catching king crabs that weigh up to 33 pounds in the Barents Sea, learning how to surf at the world’s northernmost surf school in Norway, getting blown away by the fall foliage in Finland, or setting up camp under the stars in Sweden’s Sarek National Park and realizing how wild it all really is. You don’t go on adventure here — you’re taken on one.

Here are 11 reasons you should explore Arctic Europe and its gorgeous seas, mountains, and fells. 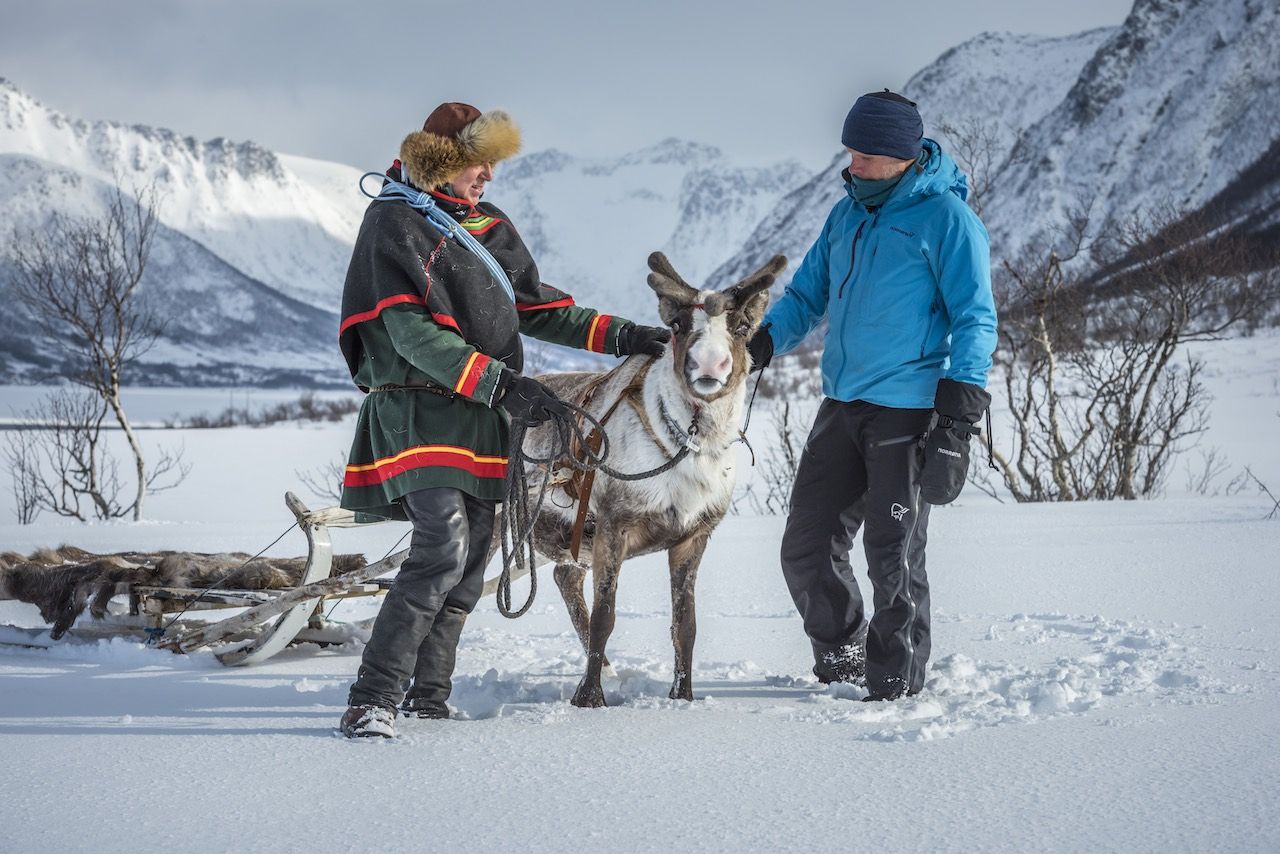 The Sámi people have inhabited the north of Finland, Norway, and Sweden for more than 4,000 years. Today, it’s estimated there are fewer than 100,000 that claim this heritage, but their way of life — languages, music, art, food — is still preserved in towns like Guovdageaidnu, Gáivuotna, Luvlieluspie, and Aanaar.

Whether you’re learning how to lasso with Tromsø Arctic Reindeer Experience, buying a handcrafted brooch from Sámi artisan Erica Huuva, passing by a pack of reindeer on your hike in Sweden’s Muddus National Park, or getting to know about Sámi handicraft with Tuula by Muddus Lake in Inari, you’re learning about the culture that’s at the heart of Arctic Europe.

2. Get fascinated by Arctic wildlife. 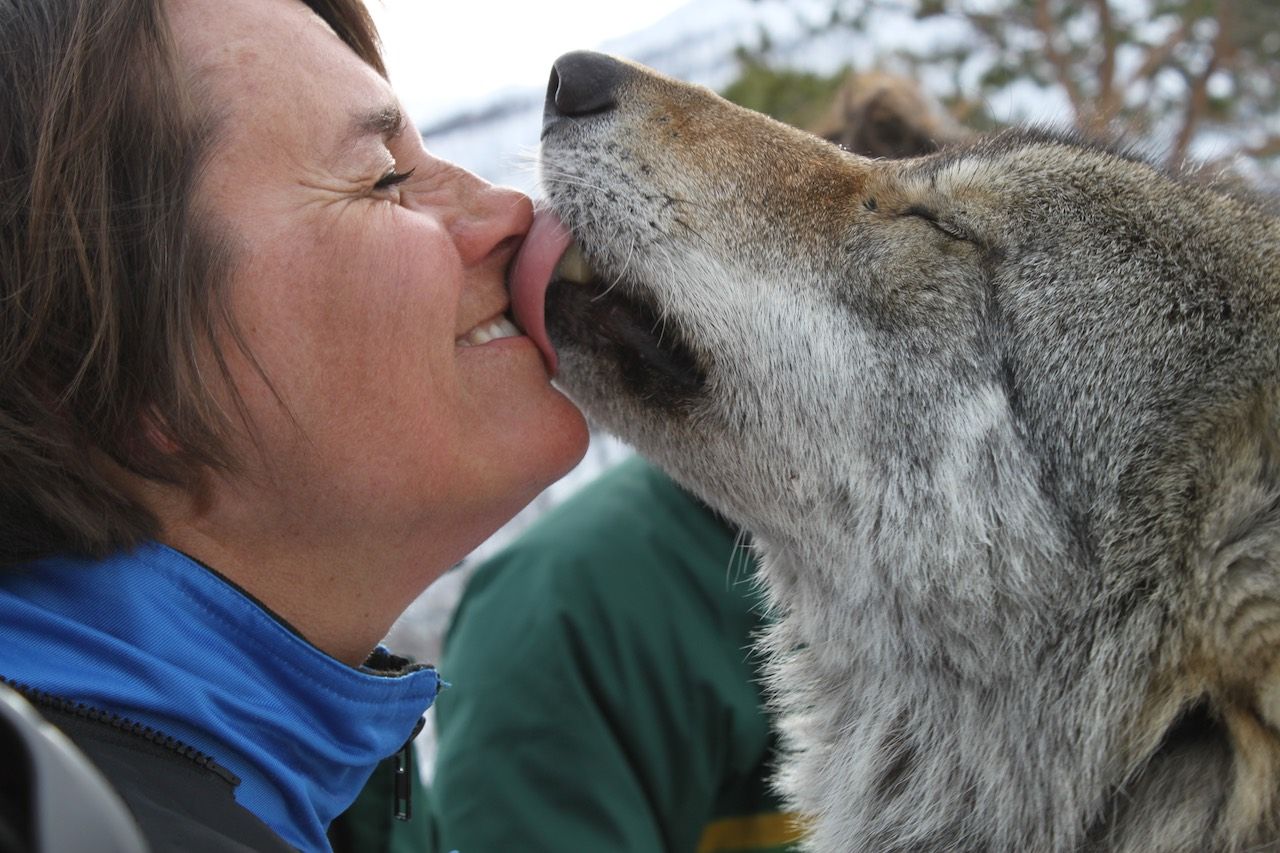 Brown bear, lynx, orcas, wolves, wolverines, king crabs, puffins, and the furry Arctic fox top the long list of creatures that roam this rugged terrain. Many of them are elusive, so your best chance at a guaranteed sighting is to go on an organized tour with a seasoned guide who can find the critters in their natural habitats (from a safe, nonintrusive distance, of course).

There are still spots where you can explore incredible wildlife habitats without a guide, too. Northern Norway’s Reisa National Park attracts relatively few hikers — but is full of gorges, glaciers, and waterfalls — and is prime territory for spotting the Eurasian lynx, wolverine, and the rough-legged buzzard, independently or not. And in the Polar Park, also in Norway’s north, small groups are welcome to approach the wolves. Sloppy kisses are pretty common, and you can howl with them at night or join in on a feeding round, too.

And then there’s the water. Get on a boat and go on a whale safari, or head out to sea to catch some massive king crabs. That warrants its own point, though, so…

3. Go on a king crab safari (and catch and eat these beasts). 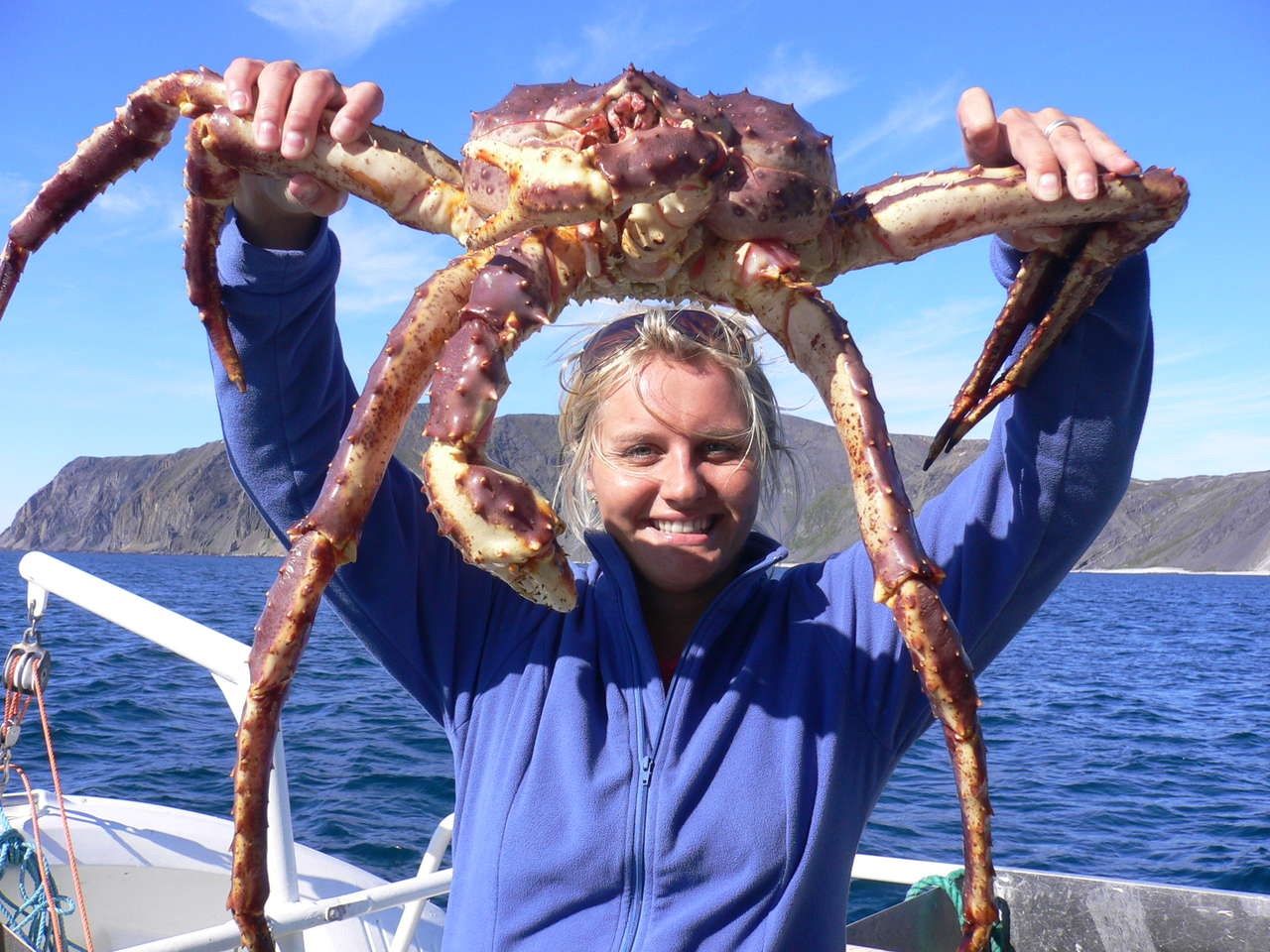 The wind will bite your face and the sea salt splash in your eyes, but it’s worth it — food always tastes better when you’ve caught it yourself. Just ask gourmet chef Gordon Ramsay, who went up north and made a meal of it. “I actually now think I prefer it to lobster. It’s so much softer and sweeter,” concluded Ramsay.

Get yourself into a pair of blue and yellow coveralls, and get out on the Barents Sea. Before you know it, you’ll be pulling traps out of the water like the pro you were destined to be. When you’re back on land, you can cook the crab yourself — if you want to eat it, you’ll have to. Yes, you’re completely capable, and yes, it’s worth it.

King crab safaris tend to take place around Kirkenes, a small town in northeastern Norway. Here, you’re very far north — winter doesn’t see all that much light, and summer doesn’t see all that much dark, but you can fish for king crab in either season. If you’re “crabbing” in winter, be prepared to venture by snowmobile, saw open the frozen ice, and eat your well-earned treasure fireside.

4. Immerse yourself in some of the world’s most spectacular Arctic landscapes. 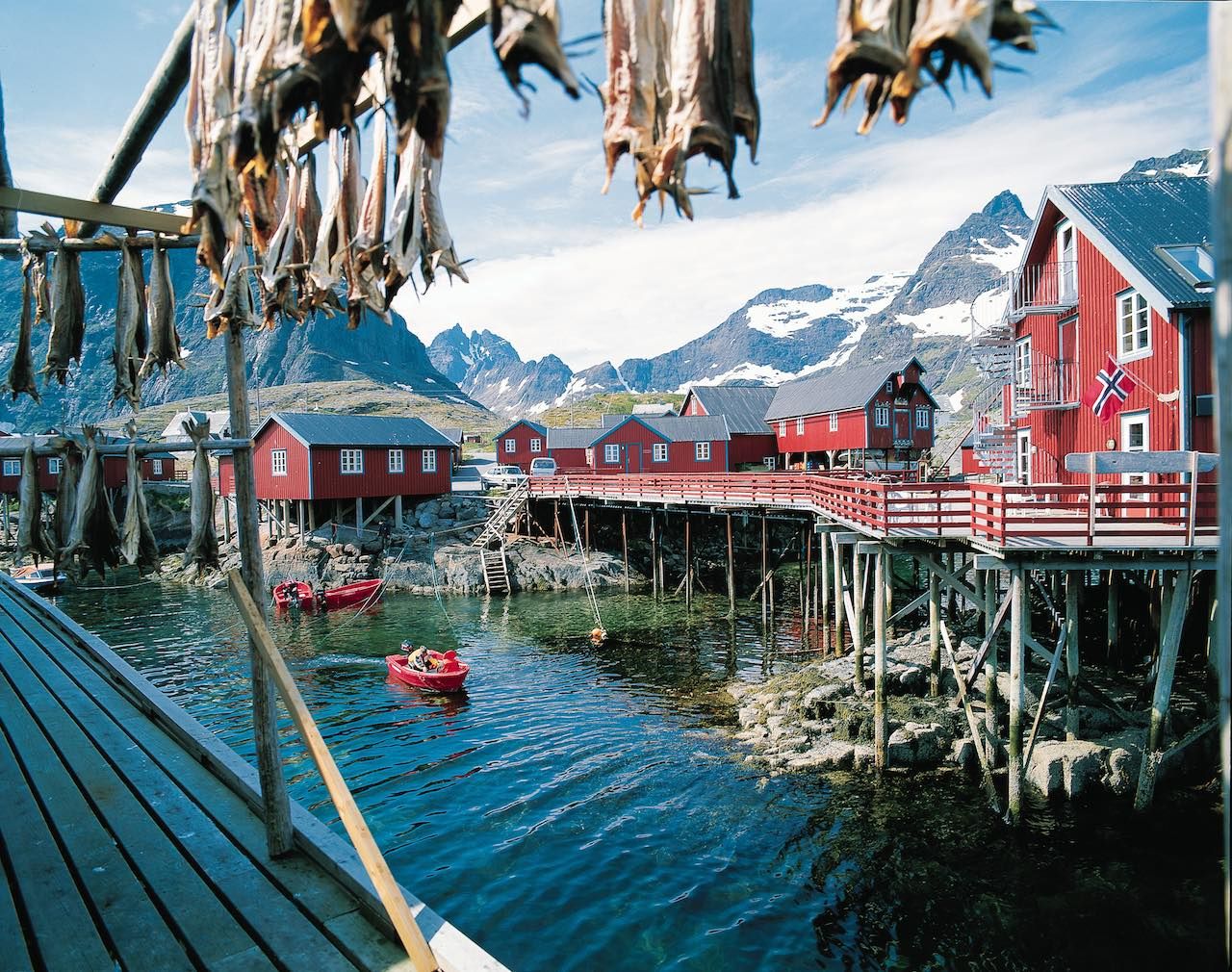 Fjords, mountains, tundra, archipelagos, open sea, lakes, rivers, ice and snow — nature’s most dramatic elements are all present here. Whether you’re sunbathing on Haukland Beach with snow still covering the surrounding mountains in Lofoten, ice skating on Torneträsk with a thermos of hot chocolate and open-faced herrgårdsost (mild Swedish cheese) sandwiches in your backpack, picking cloudberries in Saariselka in the summer (you’ll want your rubber boots, mosquito repellent, and a local Finn to guide you through the swamps and moorlands), or climbing Kebnekaise (Sweden’s highest mountain), you’re in for some serious scenery.

The farther north you go, the better, and towards the end of June you’ll see the midnight sun. There are plenty of ways to bask in the all-night light — and you can bet wherever you are, everyone else is taking advantage of it, too. Think music festivals, Midsummer parties, midnight golfing, hiking, swimming, and fly fishing, all while the rest of the world is sleeping.

If you’re in Sweden or Finland around June 24, you can celebrate Midsummer (originally a celebration of the summer solstice, the day with the longest period of daylight) like the Swedes and Finns do — by dancing around a maypole decorated with birch twigs, eating herring, and drinking snaps all night long.

6. Get as off the beaten path as you can. 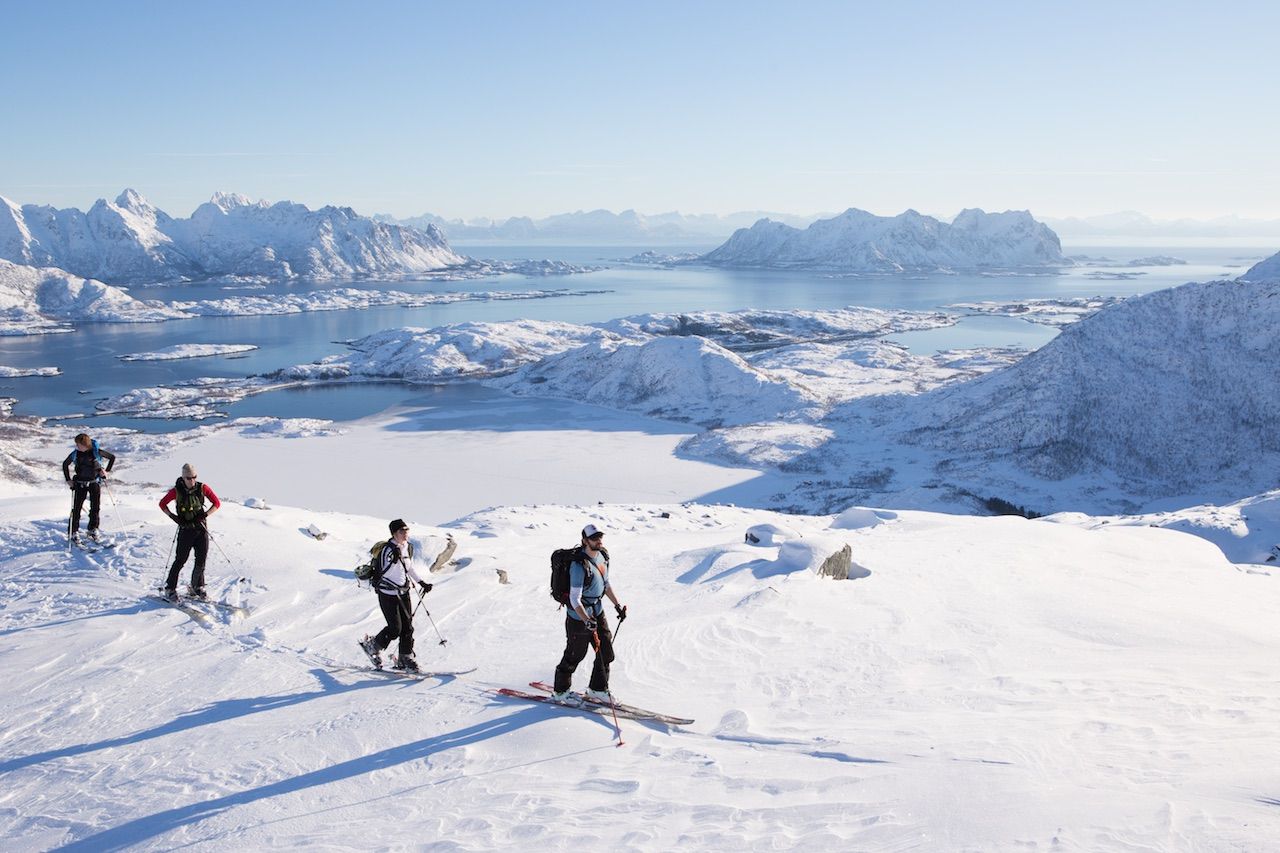 Sarek, for example, has more than 100 glaciers, and in Ráhpavuobme (or Rapadalen, as it’s called in Swedish), you’ll find an impressive delta that doubles as prime moose habitat. This park is for experienced hikers, with no mountain huts or trails, accessible only on foot or cross-country skis. But the remoteness will pay off. Set up camp by the river, bring out your stormkök (portable stove), and make yourself a bowl of Blå Band goulash soup as you listen to — and revel in — the silence.

7. Take advantage of the “freedom to roam.” 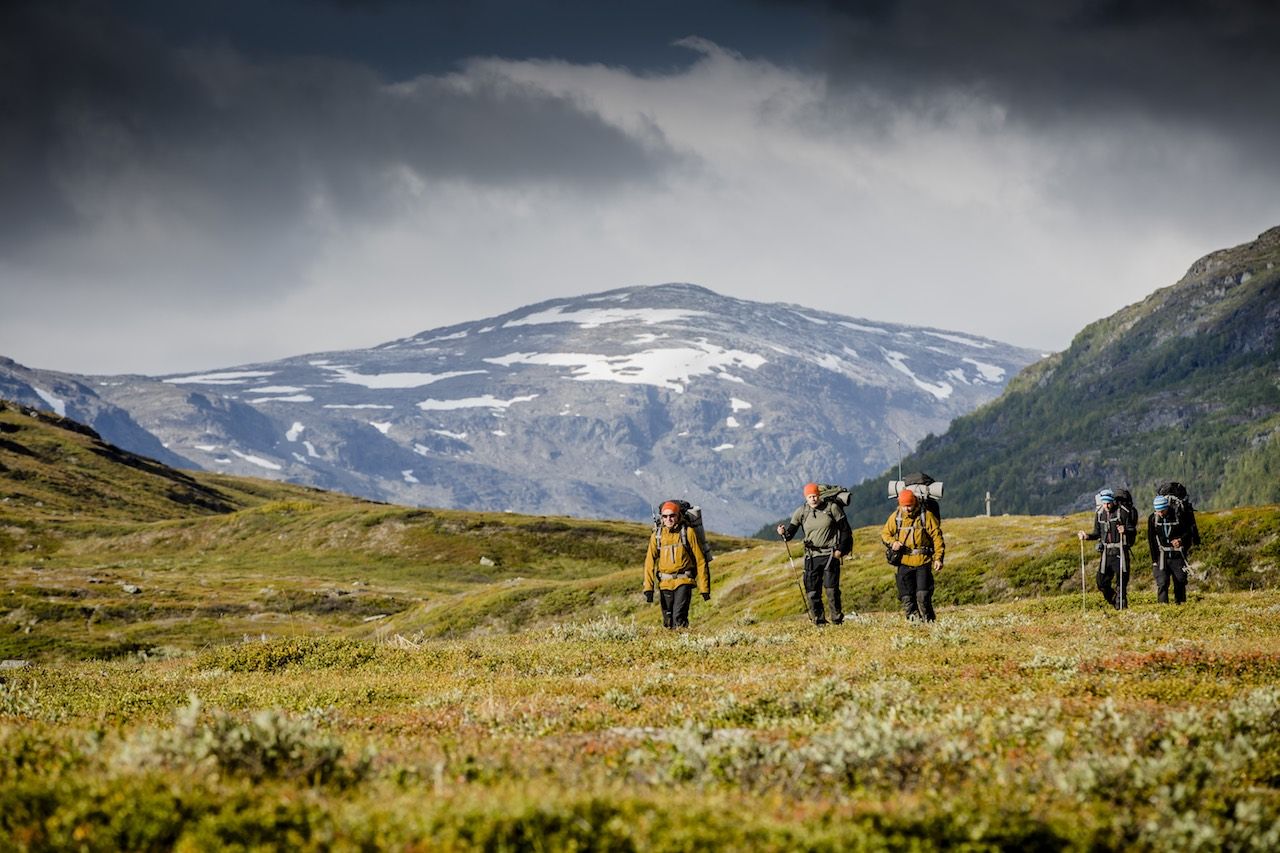 The landscape in Arctic Europe is wild and scarcely populated, and here you’ll feel like civilization as you know it — cities with their never-ending asphalt, cars, and ringing phones — is miles away. Don’t forget to bring a map and a compass when you head out (forget about your cell phone and its 4G coverage), and prepare for a level of silence you haven’t experienced before. Remember: It’s a good thing. Not terrifying. Good.

Hiking trails are well-signed most of the time, but trust us when we say the basic orienteering gear will come in handy if you end up standing at a junction and you don’t know whether to take a right or left to get to Unna Allakas in Sweden’s Abisko National Park. Or anywhere else, for that matter. In all of Arctic Europe you have the “freedom to roam.” That means on open land — in the forests, the mountains, the sprawling countryside — you have the right to wander, set up camp, and simply be. So long as you’re thoughtful, respect nature, and leave the land just as you found it, you’re invited to explore.

8. Ski down untouched runs under the midnight sun. 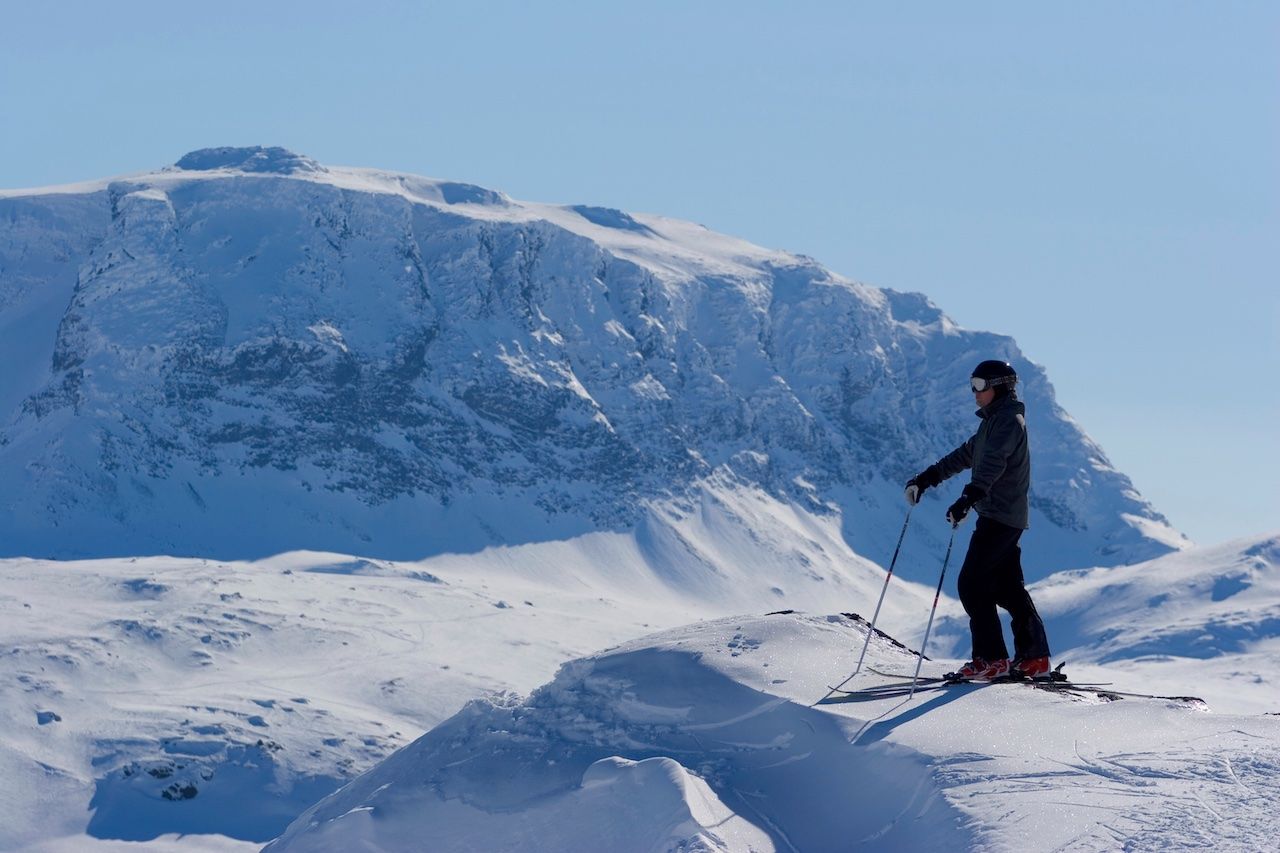 Skiing is good, but skiing at midnight in broad daylight is better. Sweden’s most northerly ski resort, Riksgränsen, is 150 miles north of the Arctic Circle and nearly 1,000 miles north of the Swedish capital. There’s 24-hour daylight from mid-May through the summer, and it’s also where you’ll find the country’s highest mountain station: Låktatjåkko, at over 4,000 feet.

And if you can’t get somewhere on the lift, go by helicopter! Heli-skiing can put you on one of hundreds of peaks, thousands of feet in the air, and right into untouched powder. Riksgränsen is a long-standing cult winter destination famous for its affordable heli-skiing and near limitless ski touring, and for good reason.

9. Watch reindeer racing through the snow. 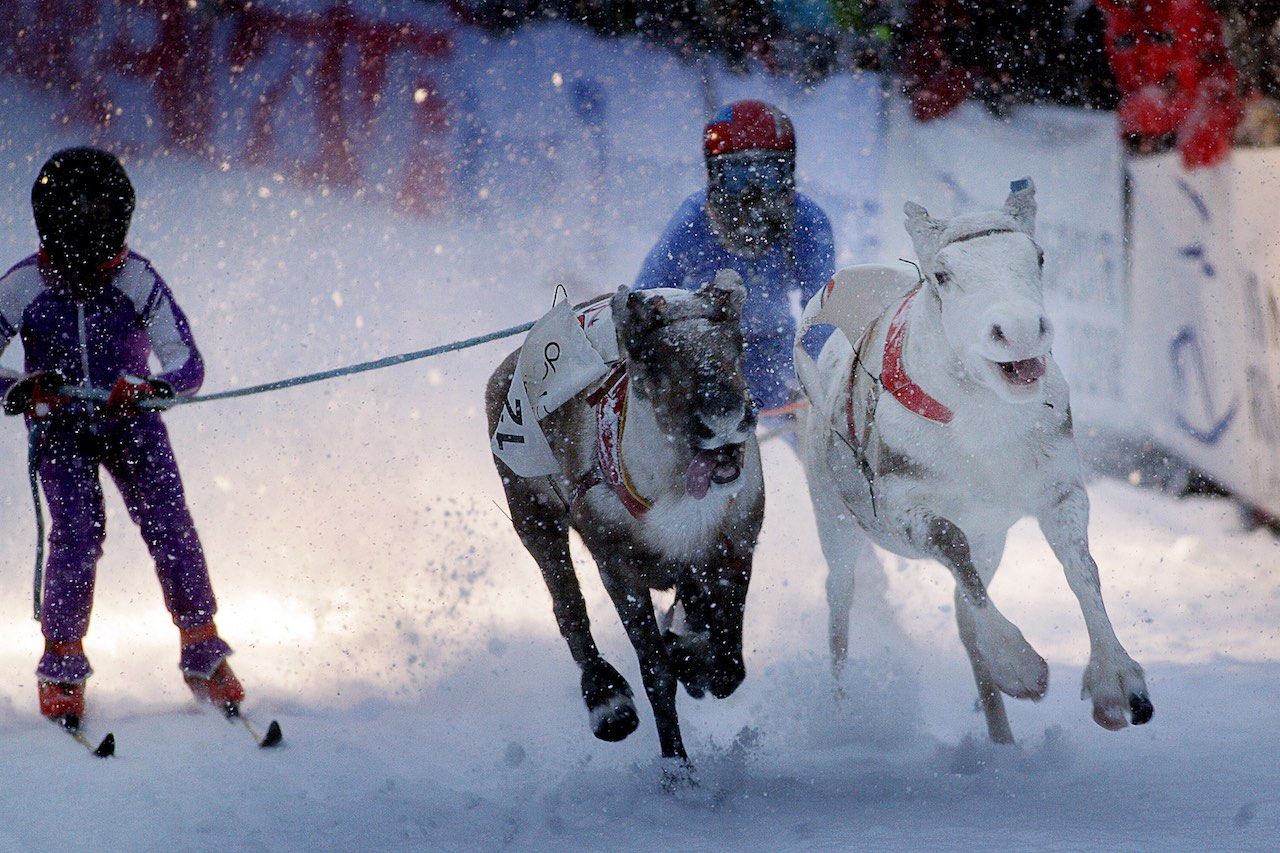 Curious about the Arctic version of horse racing? Head to the Norwegian city of Tromsø, where they throw a week’s worth of festivities for Sámi People’s Day, every year at the beginning of February.

By the last day of the festival (usually), the Reindeer Race Championship is on. Stand behind the metal fences and watch the snow whirl as Sámi racers on skis are pulled by racing — definitely not prancing — reindeer. These innocent-looking animals can run up to 37mph on the 659-foot race court, so hold onto your hat if you want to get up close to this near-mythological creature. 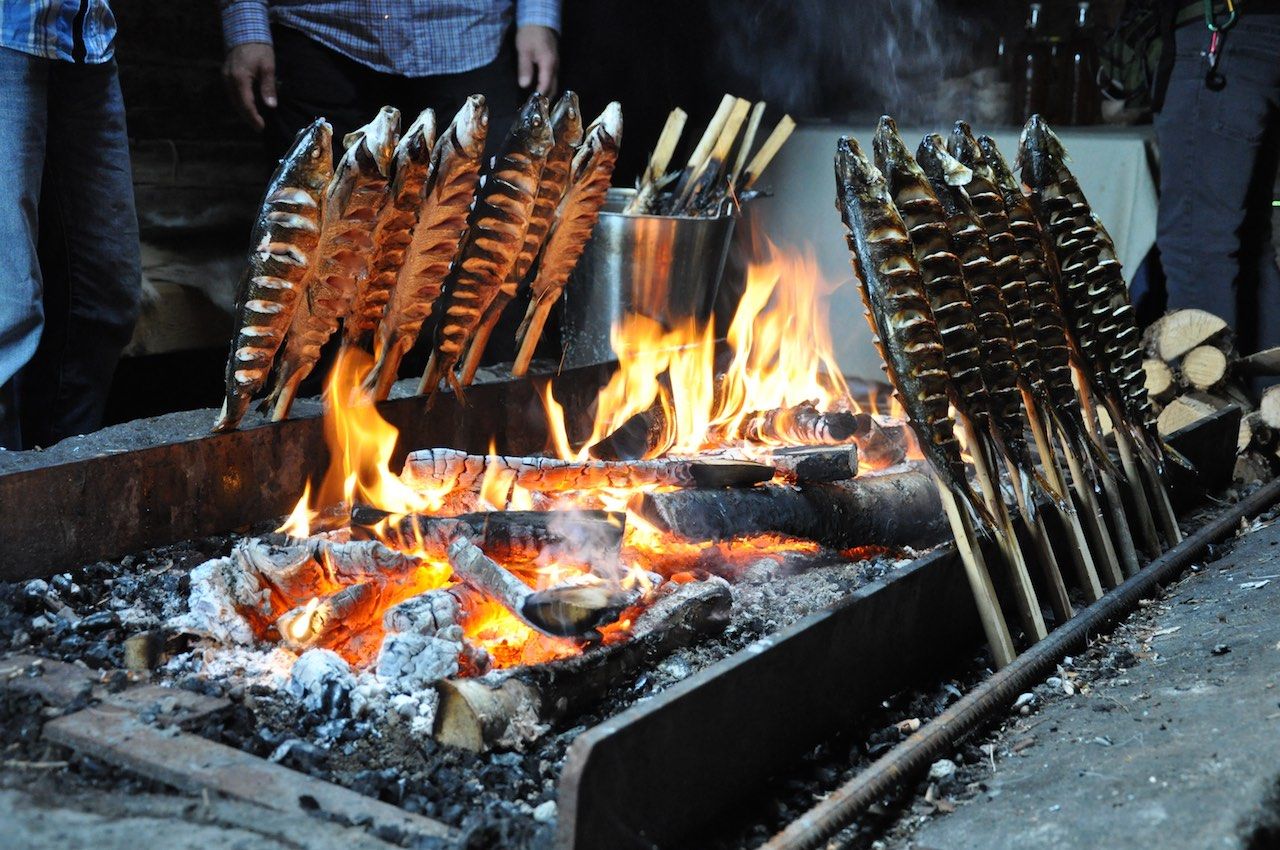 Ever tried suovas (lightly smoked reindeer meat), smoked reindeer heart, whale soup, or “beef” tartare made of minced moose? As you travel around the Arctic Circle, you’re bound to come across classic dishes with a local twist — or food that the Sámi have eaten for generations.

Book a table at Spis in Kiruna, and savor their smoked reindeer heart — it’s been smoked onsite in one of the restaurant’s goathi. Or dine at Kukkolaforsen, on the border of Finland and Sweden, where you can try skabramost, a local cheesy specialty. Or eat tørrfisk (stockfish) at Børsen Spiseri in Svolvӕr. You’re not going to find these dishes anywhere else.

But when you’re here, you’ll definitely want to get into the great outdoors and try your hand at catching and cooking your own feast. Why go farm-to-table when you can go ocean-to-plate? 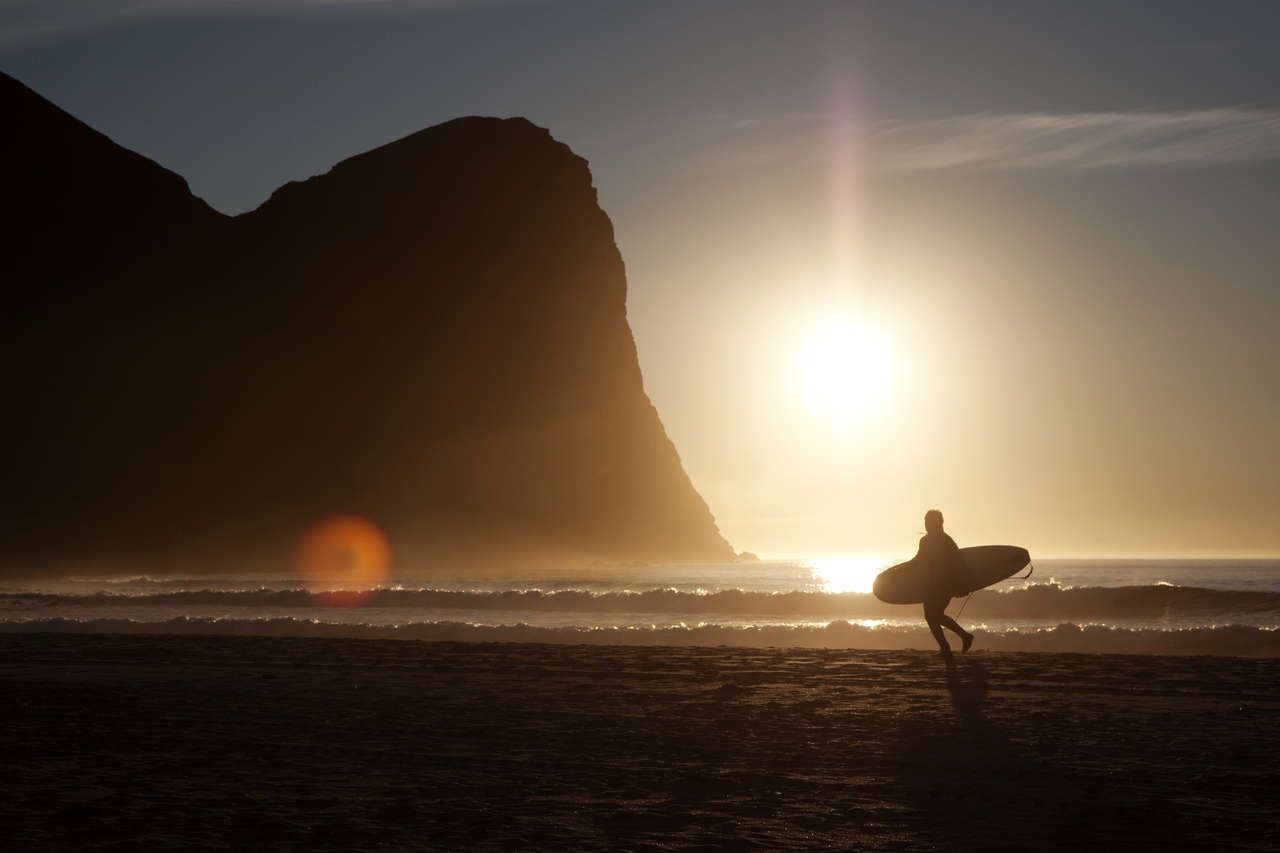 To experience some of the most coveted waves around, head to the Lofoten Islands — Unstad, on the western parts of the archipelago, to be more exact. With water temperatures ranging between 3 and 11 degrees Celsius (37° to 59° Fahrenheit), you can’t be a wuss, even in the summer.

Or…you can, actually, because the wetsuits are so good, you won’t feel a thing (well, almost). Unstad Arctic Surf offers classes between June and August, and if you’re brave enough to visit outside of these months — and we know you are — Unstad has some epic surf in fall and winter, too. Yes, it means you need to bring your full 5/4 wetsuit, booties, gloves, and hood, but the left-handed wave that comes with the fall storms is worth it — and the scenery around you (you’re in a fjord, remember) is unbeatable.

Rent a campervan, park it along the road, and grab your board. The tourists have left Lofoten, and plodding through an inch of snow with almost no one around, feeling the wind bite your face as you paddle out, has its charms. At night, cuddle up in a sleeping bag in the campervan (you’ll need one with a cold weather rating). Bring plenty of food, wool socks, and a flashlight. In December, it can get dark as early as 1pm, but the adventure badge you’ll earn is more than worth it.

This post is proudly produced in partnership with with Finnish Lapland, Northern Norway, and Swedish Lapland.
Tagged
Trip Planning Finland Norway Sweden
What did you think of this story?
Meh
Good
Awesome