SOUTH CAROLINA has been a hotspot for food, culture, and adventure for a while now, but it appears the secret is out. Charleston was voted one of the best cities to live (and dine!) in the world. The University of South Carolina and Clemson University bring students from all over — and their rival football programs don’t disappoint. And then there’s Greenville, which is topping lists of awesome small cities to visit.

And yet, much of the Palmetto State remains untouched by visitors and tourists. Are we at a tipping point? Perhaps. To get ahead of the curve, here are 11 experiences to have in South Carolina NOW. 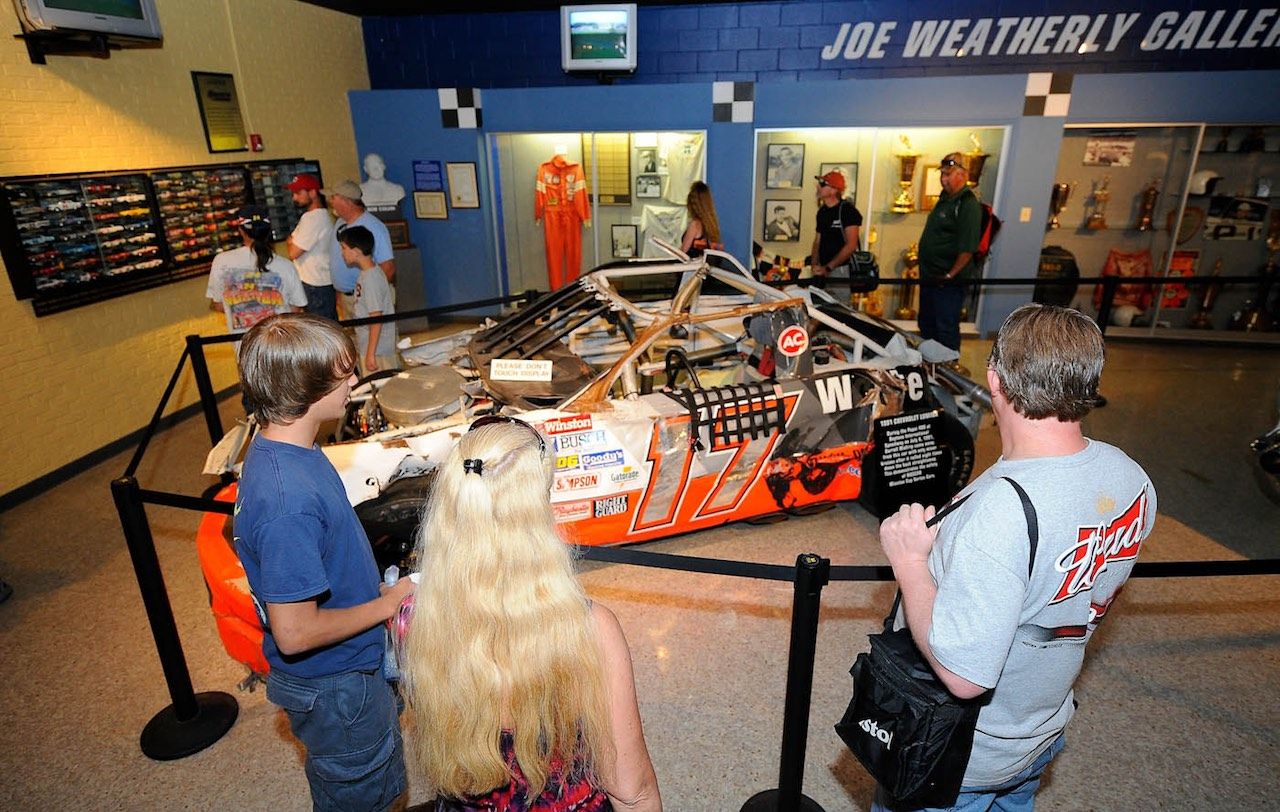 Check out the 1956 Ford convertible that won 22 races (yes, a convertible), Darrell Waltrip’s 1991 Chevy Lumina that rolled eight times (he walked away from the crash), and many more, like the ones driven by pros Johnny Mantz and Richard Petty.

To top it off, the National Motorsports Press Association Hall of Fame is onsite, and it’s basically an interactive museum helping you brush up on NASCAR and its famous personalities. If you didn’t know what all the fuss was about before, you will now. 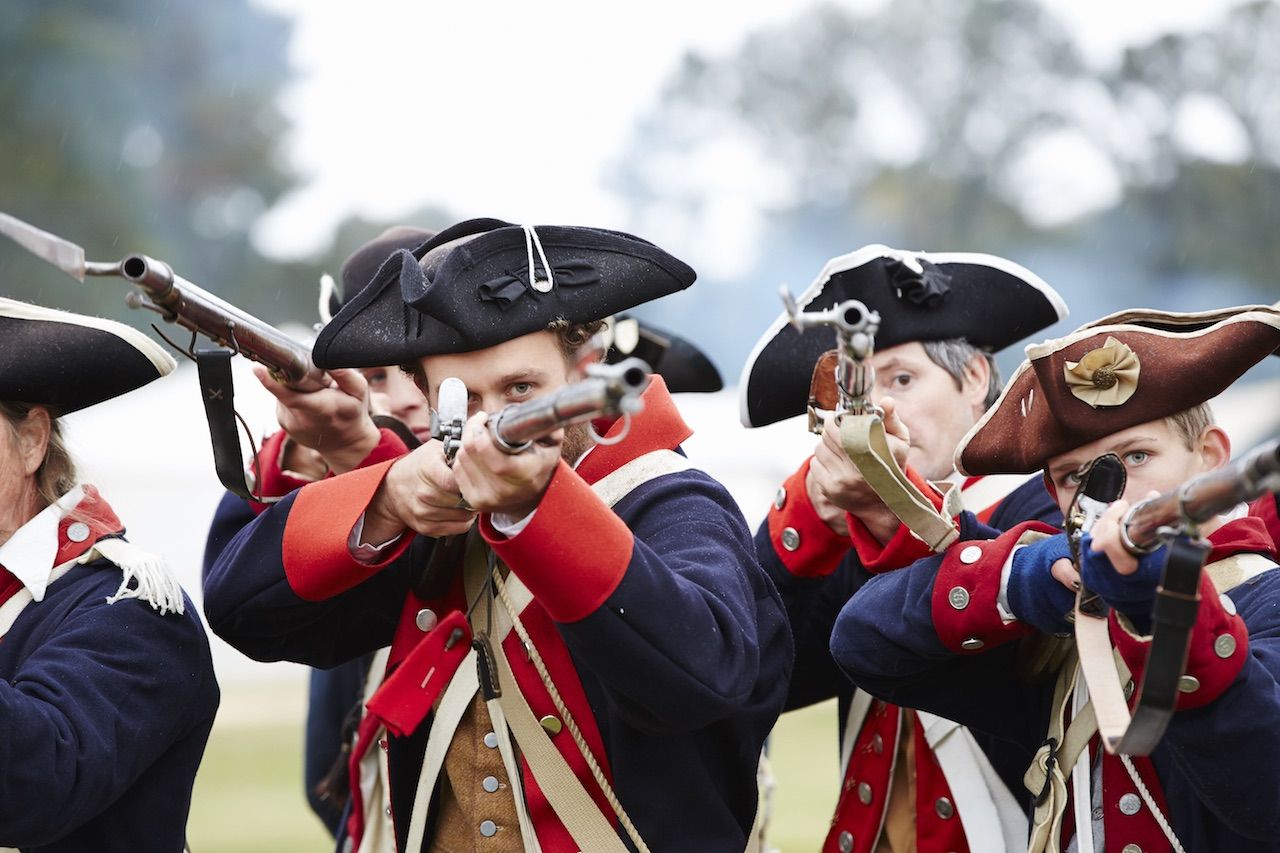 Exploring the Revolutionary War from its roots is easy from the Olde English District in Camden, most notably at the Historic Camden Revolutionary War Site. The town was under military rule for 11 months in the late 1700s (after the siege of Charleston), yet managed to flourish after the war. Luckily, its centuries-old past has been preserved, and now the site is affiliated with the National Park Service.

When you get here, start with the 16-minute orientation film before stepping into this 18th-century, 106-acre outdoor complex. You can hop on a guided tour or go at it on your own, though the tour is definitely recommended. There are dozens of buildings worth perusing, but you won’t want to skip the 1785 Craven House or the 1794 McCaa’s Tavern. The latter was likely the best place to grab a pint back in the day.

3. Seeing just how wild the backcountry is 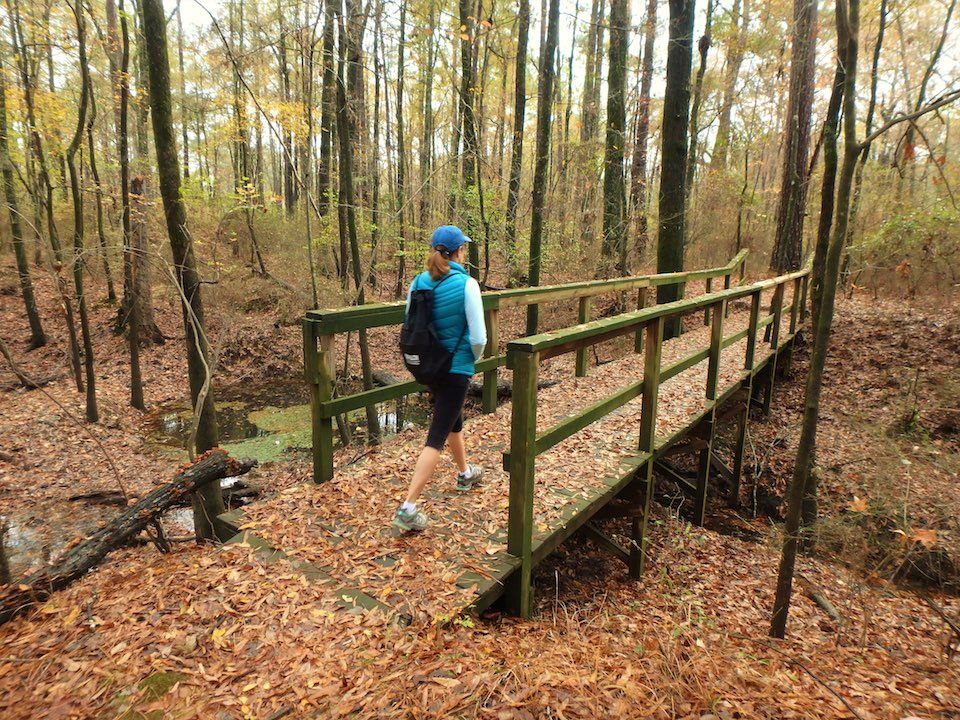 The backcountry of South Carolina is at its hands-down best in Congaree National Park — featuring 26,000 acres of lush, green, watery wilderness. Champion Trees (in the largest concentration in the country) create canopies over almost every waterway, upping the solitude of canoeing or kayaking adventures. There’s so much water here that rangers lead paddle tours, and the best way to see the park is by literally getting your feet wet. Fishing, camping, and hiking are all great, too — there are more than 20 miles of trails along with plenty of campsites.

And if you’re wondering why South Carolina’s backwaters deserve national park status, know that this area has been designated an International Biosphere Reserve and is one of the few remaining — and best-preserved — ecosystems of its kind. With that comes plenty of wildlife, and if you’re lucky, you’ll catch the synchronous fireflies putting on a show.

4. Fixing yourself a true Southern drink 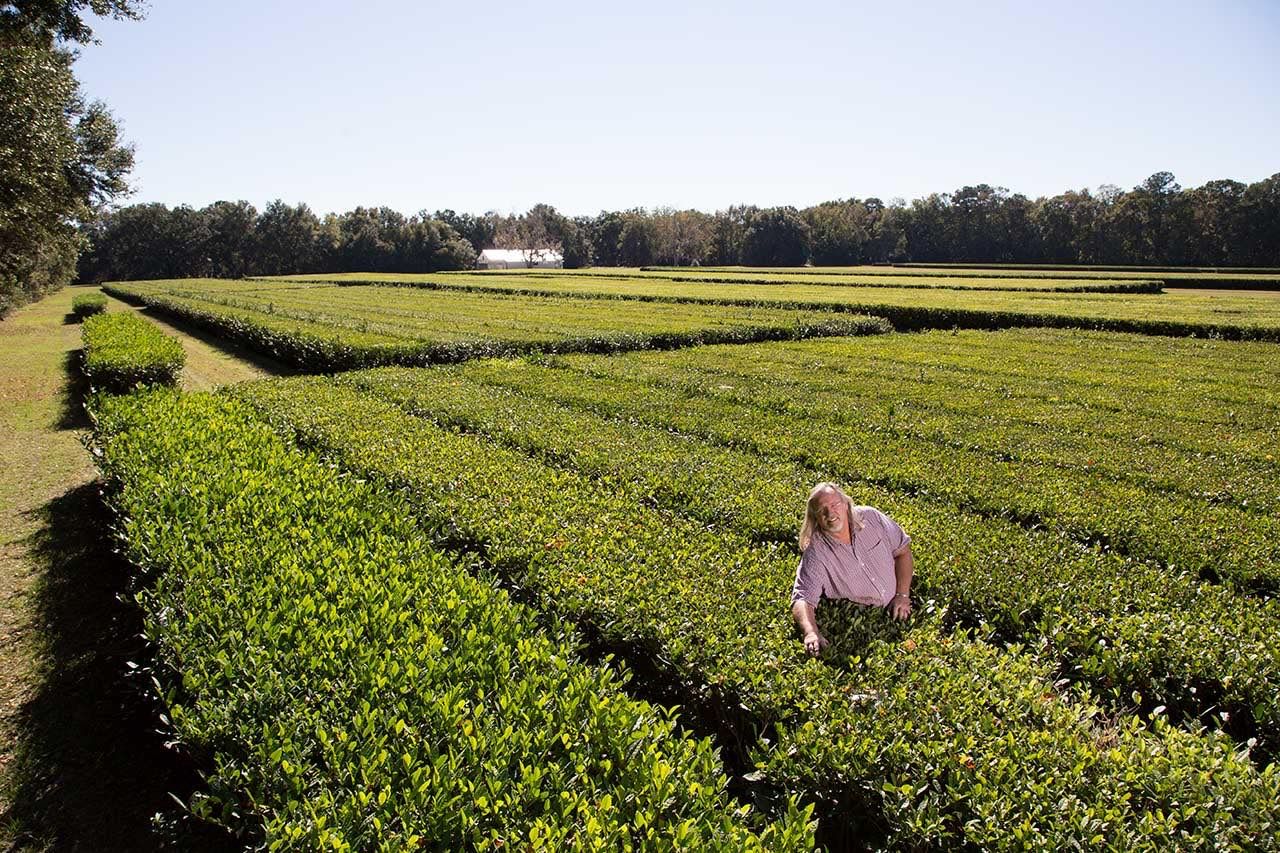 Drive to Wadmalaw Island, and you’ll come across the iconic Charleston Tea Plantation between the towering oak trees draped in Spanish moss. This is the only remaining large-scale commercial tea production company in the United States, and it produces the “official hospitality beverage” of South Carolina. You can watch the process firsthand here, tiny camellia leaves blending and steeping to create the tea’s soft and mellow mix.

The drink is ubiquitous throughout the state, and you’re not a true South Carolinian until you know and love it. Locals pour a glass when neighbors pop over, and you can get a fresh, smooth cup for yourself when you leave the plantation — that’s Southern hospitality.

5. Meeting a whole other culture on the barrier islands 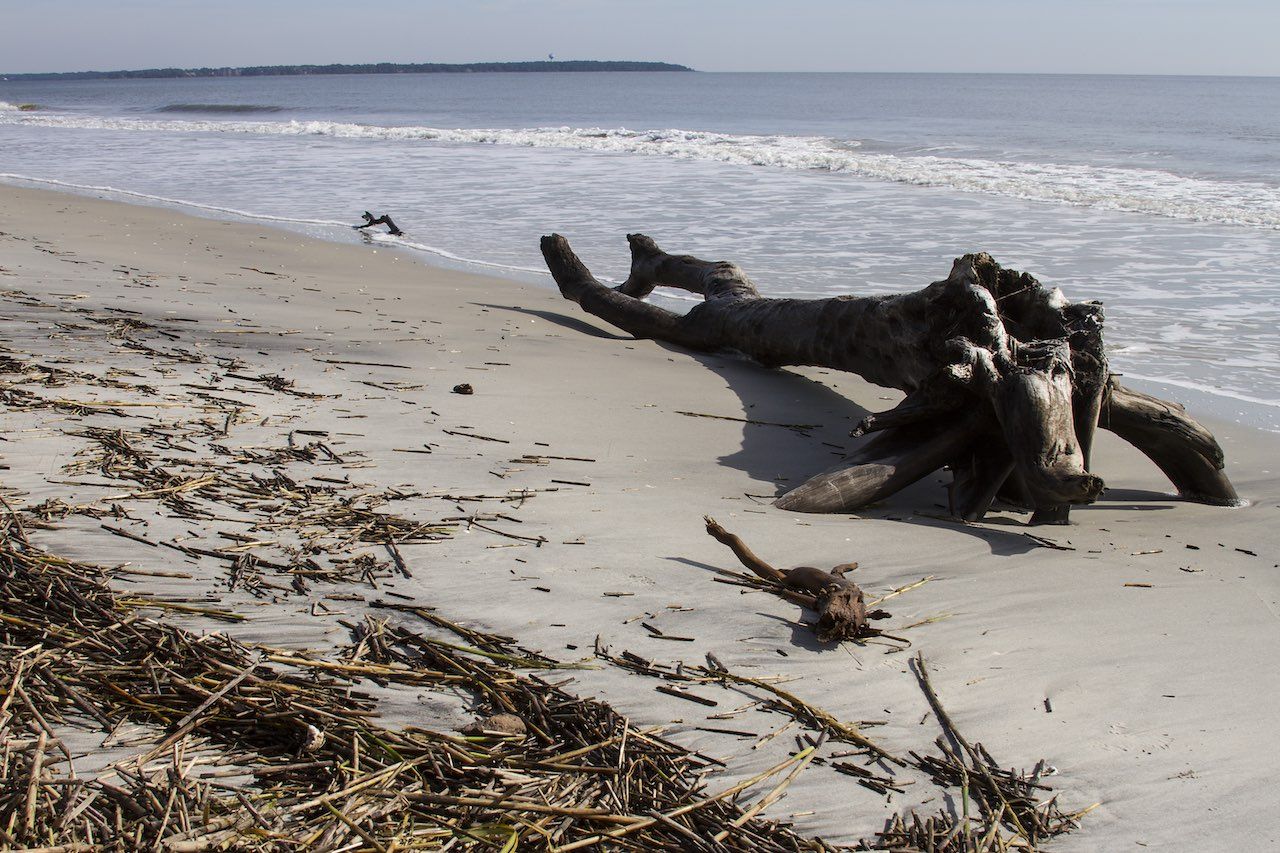 There are plenty of islands in South Carolina, but Daufuskie Island is about as uncharted as it gets — most people have never heard of it. If you’re looking to actually get away, this is the place.

Daufuskie is easy to get to from Hilton Head (it’s only a mile away), but it’s still like traveling to a different era — or world entirely. It’s only accessible by boat, and is largely one giant historic district. You won’t find shopping malls and row upon row of fancy five-star spas, but you will find plenty to do. Between the empty beaches, the Daufuskie Island Rum Company, and the seafood restaurants, you should be alright.

The Gullah culture, descended from slaves mostly from West Africa, have thrived on Daufuskie Island. Since their arrival, they’ve held proudly to their community, values, and traditions by staying together in small villages on the island, some of which are still going strong today.

Traditional crafts are intricate, like the famed handwoven sweetgrass baskets — one of the oldest crafts of African origin in the country. Gullah cuisine has strongly influenced the Lowcountry, too. Their traditional meals consist of rice, okra, and shrimp — which we all know now as “soul food.” 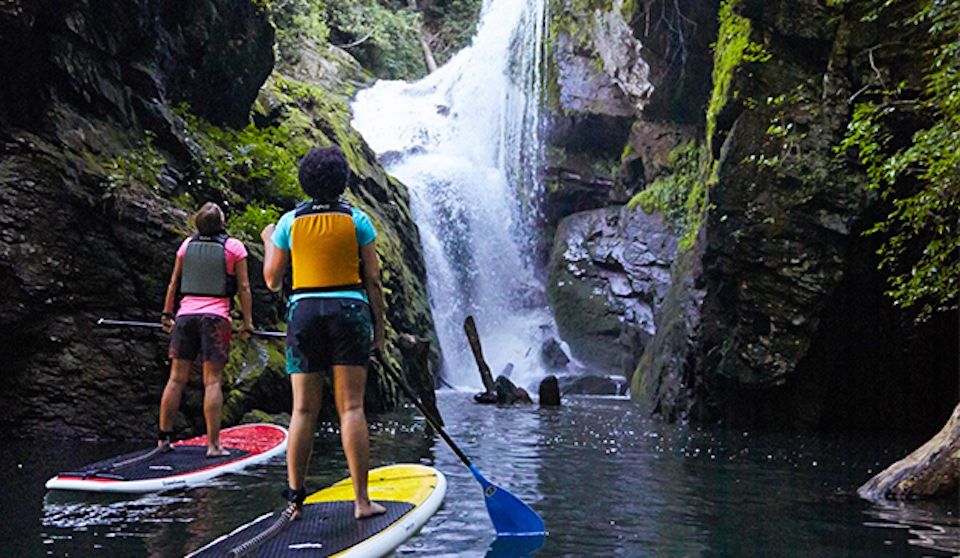 Take Devils Fort State Park, for example. It’s 7,500 acres in the Blue Ridge Mountains, and you’d be hard-pressed to find a state park this tranquil and photogenic anywhere on the East Coast. Maybe it’s the comforting sound of rushing waterfalls, maybe it’s the cliffs covered in emerald moss that seem to glow in the mist, or maybe it’s the sound of fly fishers’ boots wading through the water…

The park is the only place with public access to Lake Jocassee, a body of water teeming with both wildlife and visitors. Locals come here in flocks to kayak, waterfall climb, and whitewater raft. When you’re not breaking a sweat, keep an eye out for bald eagles, peregrine falcons, and Oconee Bell flowers — they all flourish in the landscape of Devils Fork.

7. Staying at a park resort 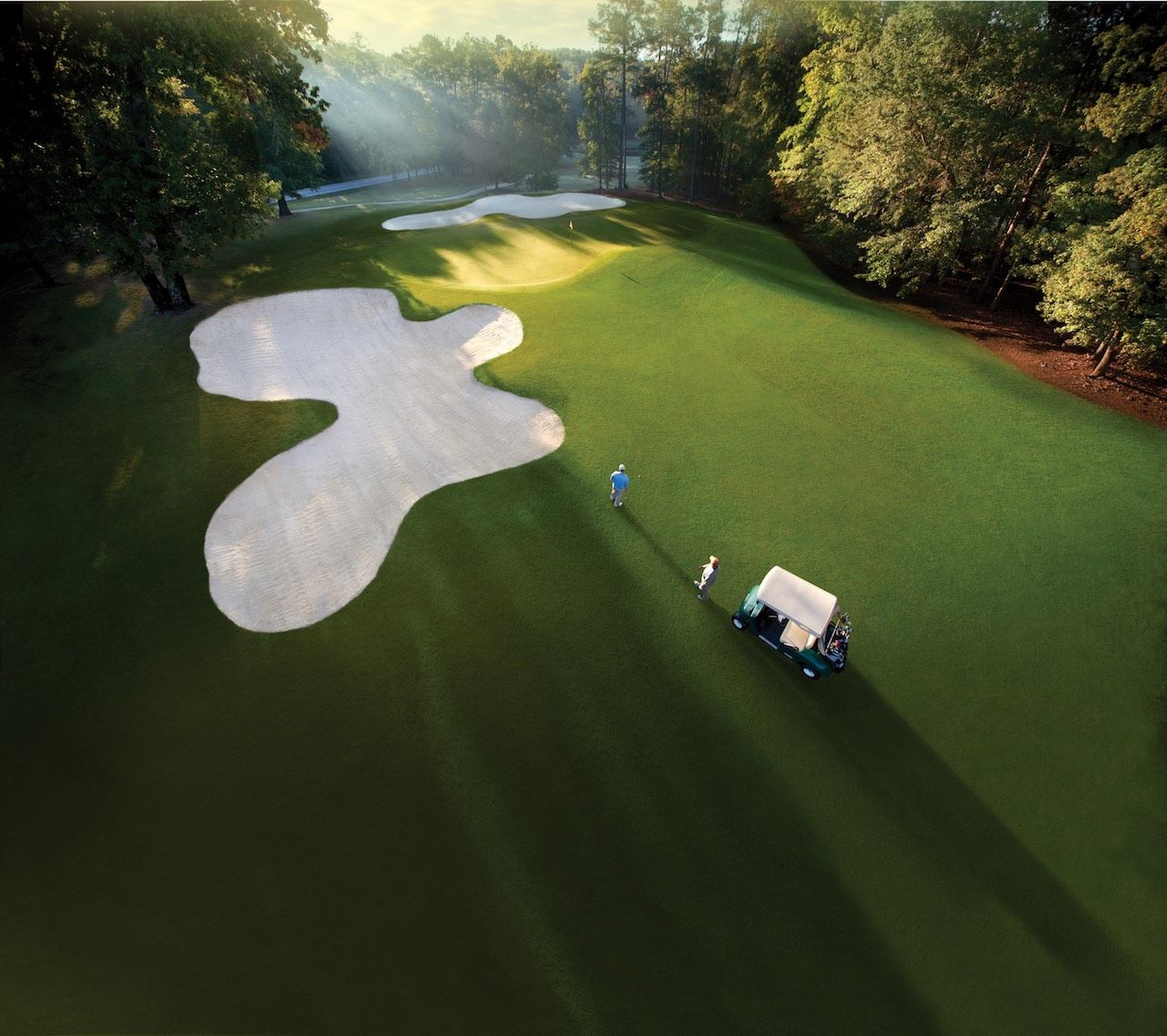 Hickory Knob State Resort Park will forever change your opinion on how luxurious state parks can be. Apart from the waterfront lodge, there’s 18 holes of lakeside golf, boating, mountain biking, tennis, and even archery and skeet shooting. The adjacent Strom Thurmond Reservoir ups the ante to include fly fishing, swimming, canoeing, and kayaking.

8. Stumbling on swaths of green space hiding in our cities 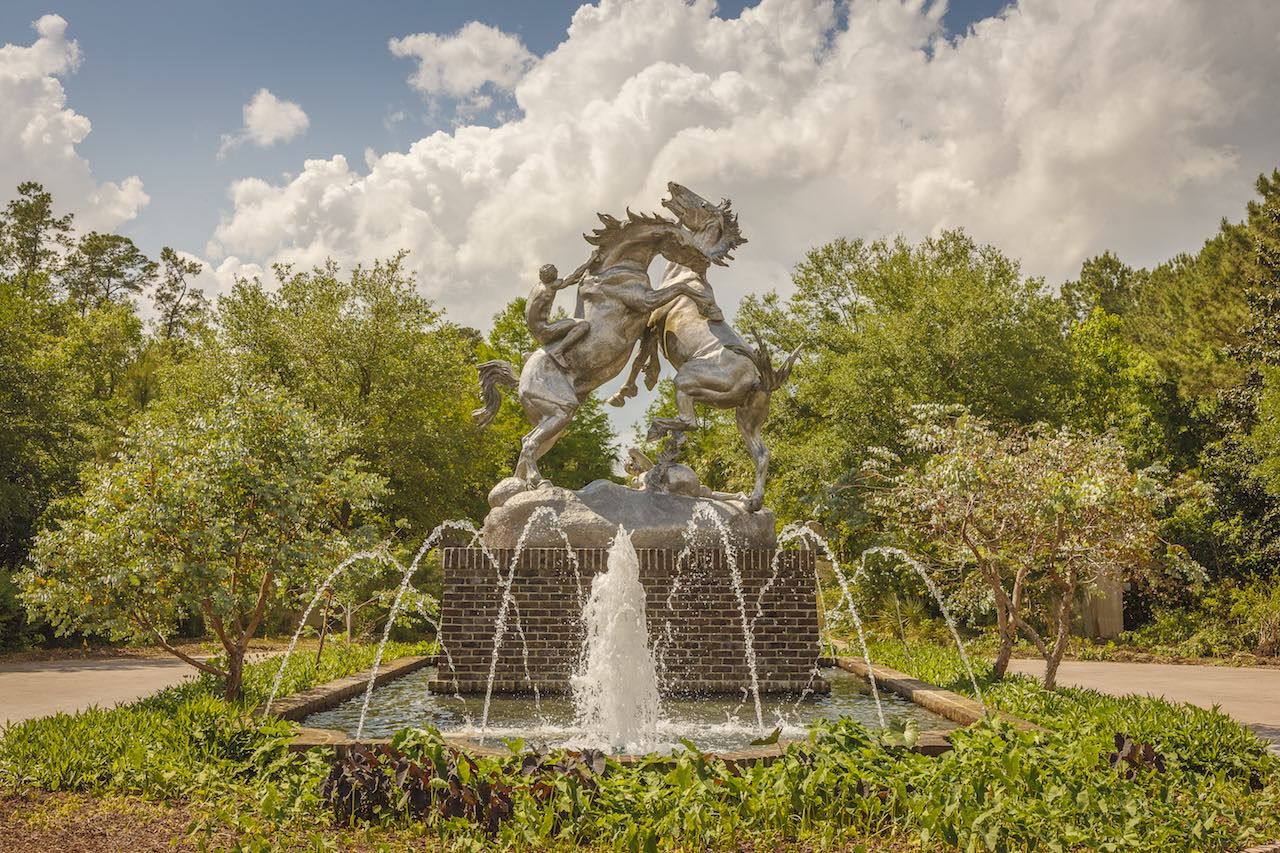 There’s a lot to see in Myrtle Beach, but getting away from the downtown crab-leg buffets and the popular beach escapes is inevitably required. Enter Brookgreen Gardens. Located in the middle of a 9,100-acre preserve, the 300-acre property is great for viewing wildlife, meditating, and wandering through butterfly houses. Pontoon boat cruises are available to go deeper into the preserve, and back-road tours and overland excursions are good options, too.

Perhaps more importantly, though, this national historic landmark is home to what must be one of the most awe-inspiring sculpture sites in the world — there are 2,000 sculptures by 425 artists, all within the gardens. 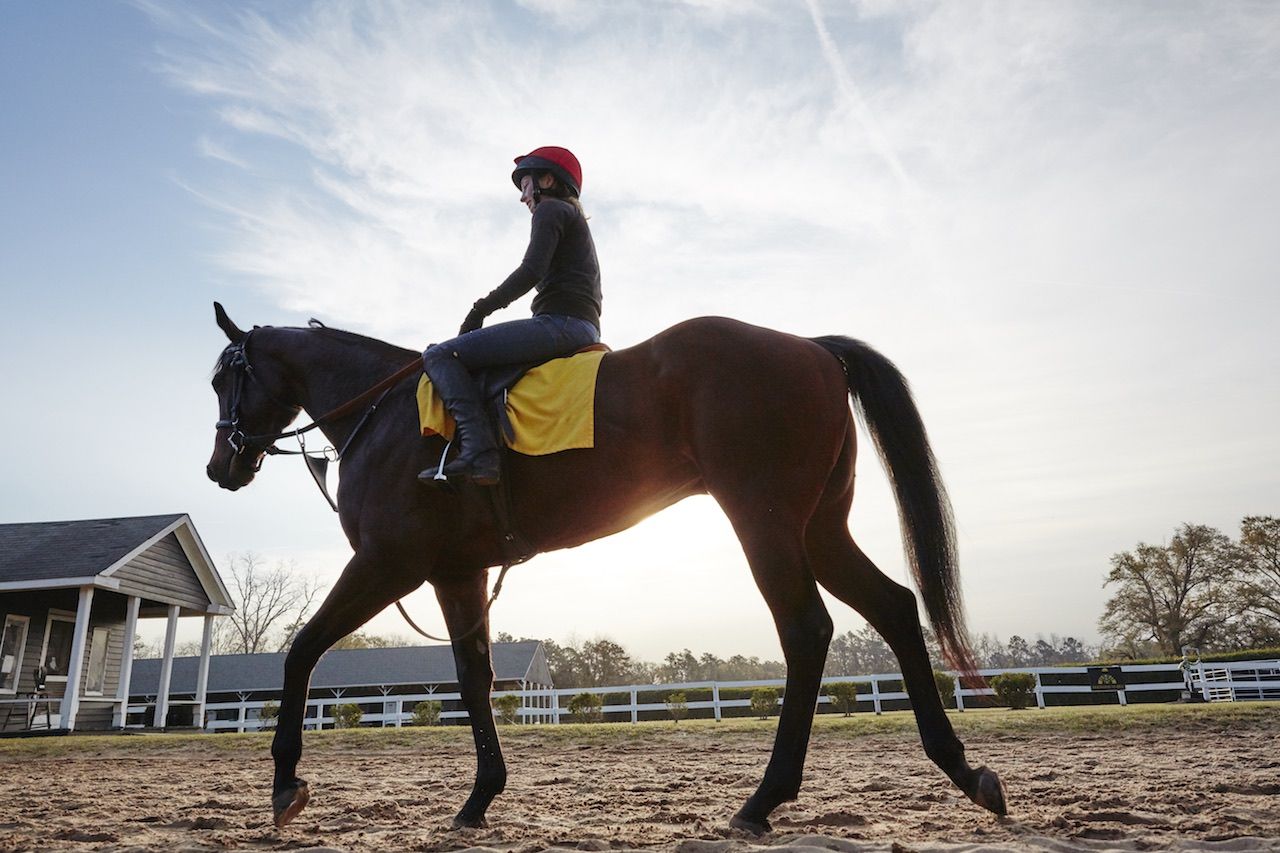 There’s an area of South Carolina known as “Thoroughbred Country,” and its heart is the town of Aiken. The town is bursting with all kinds of equestrian-themed happenings and spots where you’ll find homages to horse culture, like the Thoroughbred Racing Hall of Fame and Museum, the Aiken Center for the Arts, and the Aiken Triple Crown and Aiken Trials.

Get there in time for the Aiken Steeplechase in spring or fall to witness pre-event tailgating, a hat and crazy pants contest (yep, that’s right), and to tour the village and shops. It’s even easier to get around if you stay at Hotel Aiken, a great spot for laying your head and making the races on time.

10. Hitting the water…beyond the ocean 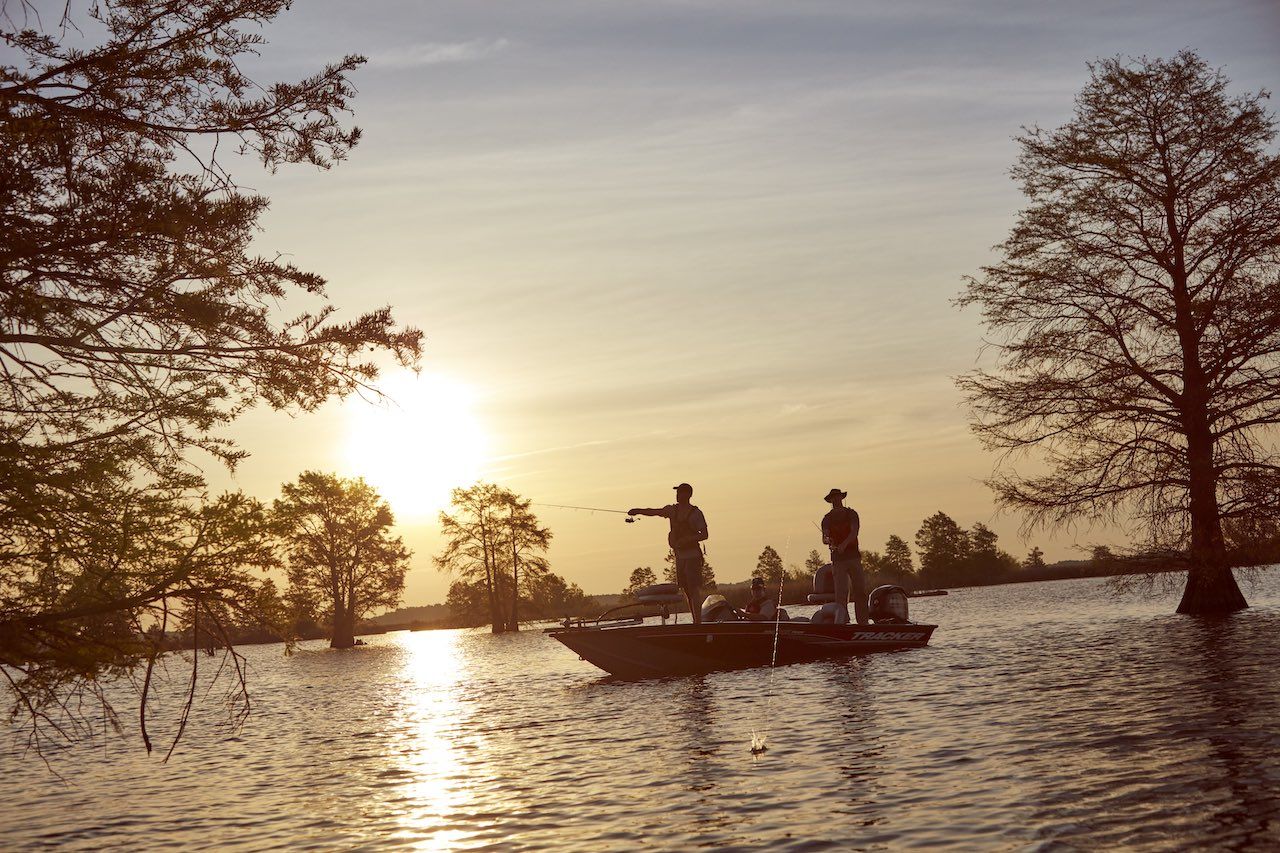 Lake Marion is the biggest lake in the state, clocking in at over 170 square miles. It’s famed for its wealth of huge catfish, bream, largemouth bass, and crappie, making it one of the best freshwater fishing destinations in the region. Plenty of cabins and campsites line the shores, and biking and boating are popular here in addition to fishing.

If lugging around a rod and reel isn’t your cup of tea, check out the boat tours into the nearby flooded cypress forest, and keep your eyes peeled for wildlife like ospreys, owls, egrets, and alligators.

11. Getting to know Travelers Rest 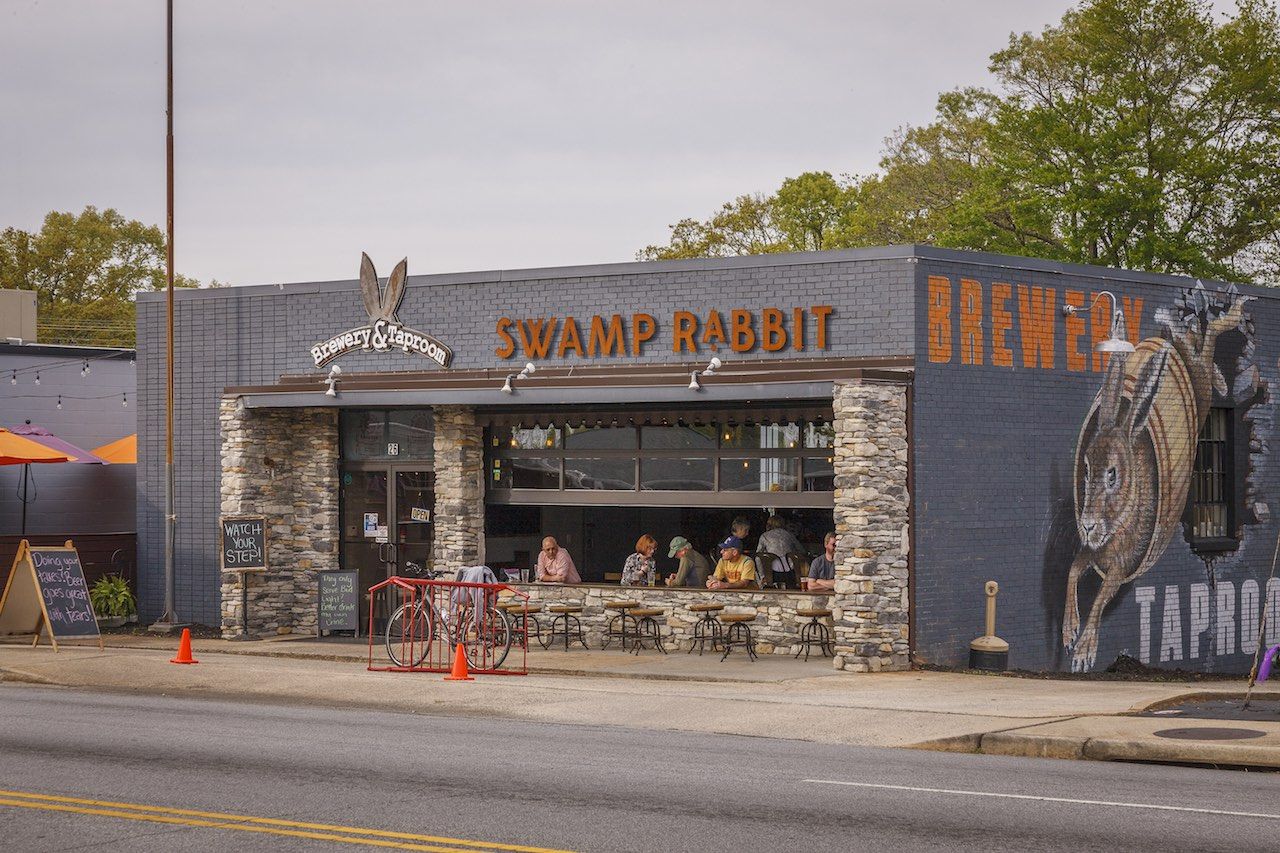 When the 18.7-mile ​GHS Swamp Rabb​it Trail connected downtown Gre​enville to TR, or Travelers Rest, it was a game changer. The once-sleepy town was put on the map, and now it’s a small hub calling to those who love biking, hiking through the forest, drinking locally brewed booze, and sampling local eats.

The trail has gotten some pretty serious acclaim since it opened in 2009, and businesses have sprung up like wildfire since. The Cafe at Williams Hardware, a local lunchery owned by two sisters, was one of the first, and is a great spot for some just-like-mom-made cuisine. The Forest Coffeehouse will fill you with all the caffeine you need to keep trekking the trail, and at the end of the day, Copperhead Mountain Distillery will supply free moonshine samples. But maybe stop by Down Home Desserts first so the super-potent moonshine doesn’t hit too hard — you’ve got another jam-packed day tomorrow.

This post is proudly produced in partnership with Discover South Carolina.
Tagged
Insider Guides South Carolina, United States
What did you think of this story?
Meh
Good
Awesome