SPEND ANY AMOUNT of time in Louisville, Kentucky, and you’re going to be surprised. This is a bustling metro on the upswing of a decades-long revitalization, a place where it’s as common to hear Somali as it is the region’s unique Southern-lite drawl; where grits are optional with your artisanal farm-to-table eggs; and where perhaps the most unexpected takeaway (according to many out-of-towners I’ve met) is why they’ve never discovered such an urban oasis in the midst of so-called “flyover country.”

Here’s a primer on some of the surprises in store — to uncover the rest, you’ll have to come explore for yourself.

1. Bourbon isn’t just the best spirit in the world — it’s a place. 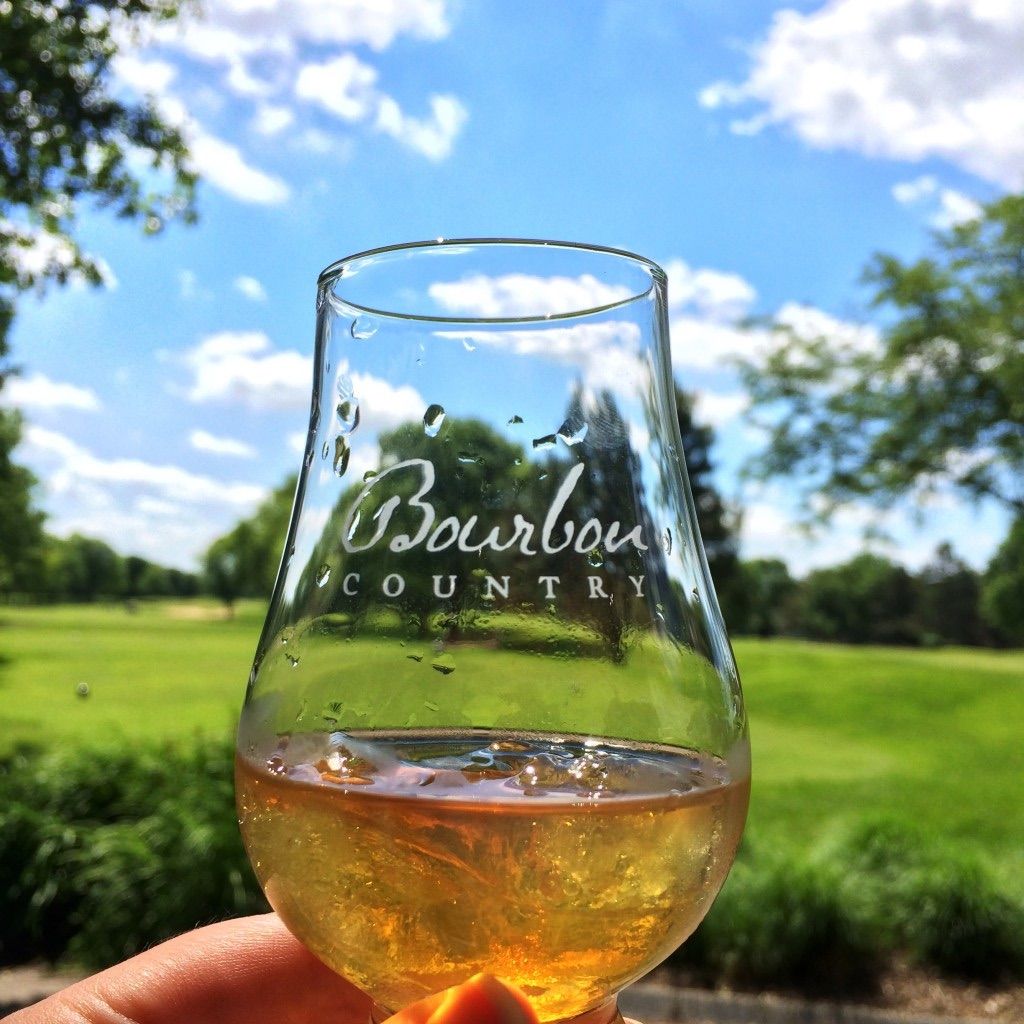 Much as any proud Parisian will insist that true bordeaux comes from in and around Bordeaux, France, Louisvillians won’t hesitate to let you know that true bourbon comes from in and around Bourbon Country. And Louisville is your base for exploring the region, either on your own or via a package tour. (Pro tip: The latter includes a designated driver, so you can safely partake in true, silky, caramel-colored leisure.)

But you can also immerse yourself in the world of bourbon without leaving city limits. Meet Louisville’s Urban Bourbon Experience, which combines three ways of celebrating “America’s native spirit.” First, visit the five urban distilleries in the city and take advantage of their tours and tastings. Next, go deeper by hitting up some of the 36 stops on the Urban Bourbon Trail, comprising local bars and restaurants that specialize in bourbon-focused cocktails and meals. And finally, try to plan your trip around one of the city’s bourbon-themed events, such the Bourbon Classic or the Urban Bourbon Half Marathon.

However you do it, make sure to order at least one Old Fashioned — a drink invented in Louisville and recognized as the city’s official cocktail (Louisville is one of just two cities across the country that take libations this seriously).

At least in terms of architecture. While the vast majority of American cities demolished their wrought-iron and Romanesque homes in the name of “urban renewal,” Louisville managed to resist the worst of these excesses. Behold Old Louisville, where you’ll find the highest density of Victorian-era homes and residential stained-glass windows in the United States. A stroll down tree-flanked South Third Street is the closest you’ll come to time travel (minus those annoying, white-haired mad scientists).

For the past 30 years, the area has slowly been repopulated with families, working professionals, and college students unconsciously reinvigorating the area with many of the kind of shops, restaurants, and services you’d expect to find in a bigger city — all tucked away amid the 19th-century grandeur. Stop into the Historic Old Louisville Visitors Center to get started, and be sure to round out the day with a six-course dinner at 610 Magnolia, coffee and down-home breakfasts at the 95-year-old Wagner’s Pharmacy, or one of the crafted cocktails at The Old Seelbach Bar.

3. We’re more diverse than a kaleidoscope… 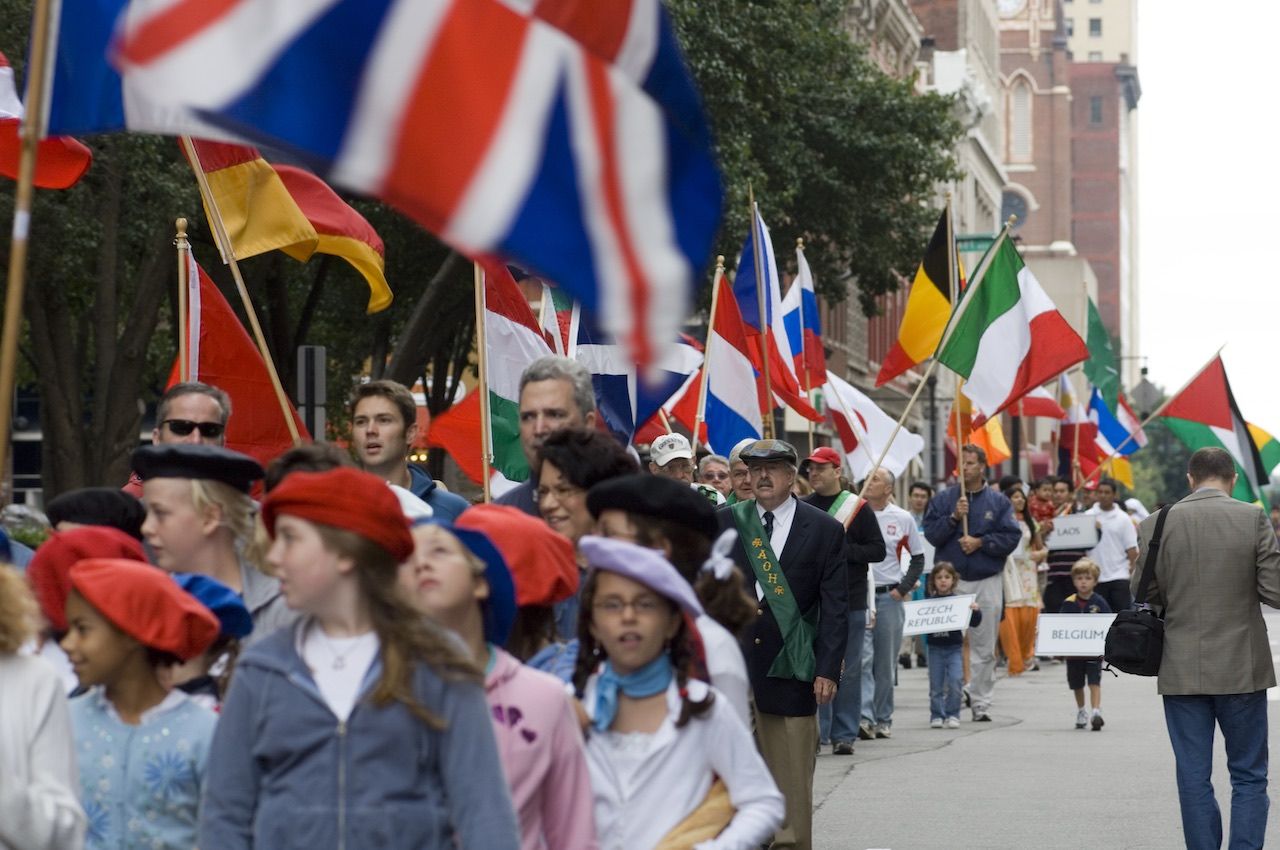 For over 20 years, Louisville’s immigrant population has been growing faster than that of its native denizens, creating a diverse social fabric far beyond what you’d expect of a city of this size and location. From Somalis to Mexicans, Ukranians to Indians, Polish to Sudanese, the city is an international human smorgasbord. Many have concentrated in up-and-coming South Louisville neighborhoods, with all the markets and vendors of their respective “old worlds” blending with the area’s shops and thrift stores.

While other cities might struggle with such a global influx, not Louisville. For years, the city has hosted WorldFest, a celebration of diversity held annually near the banks of the Ohio (September 1-4, 2017). That state fair scent we’re all so used to? It feels sugary and cheap when compared to the rich sounds and smells emanating from this spread of global music and cuisine.

4. …and we take Pride in our diversity. 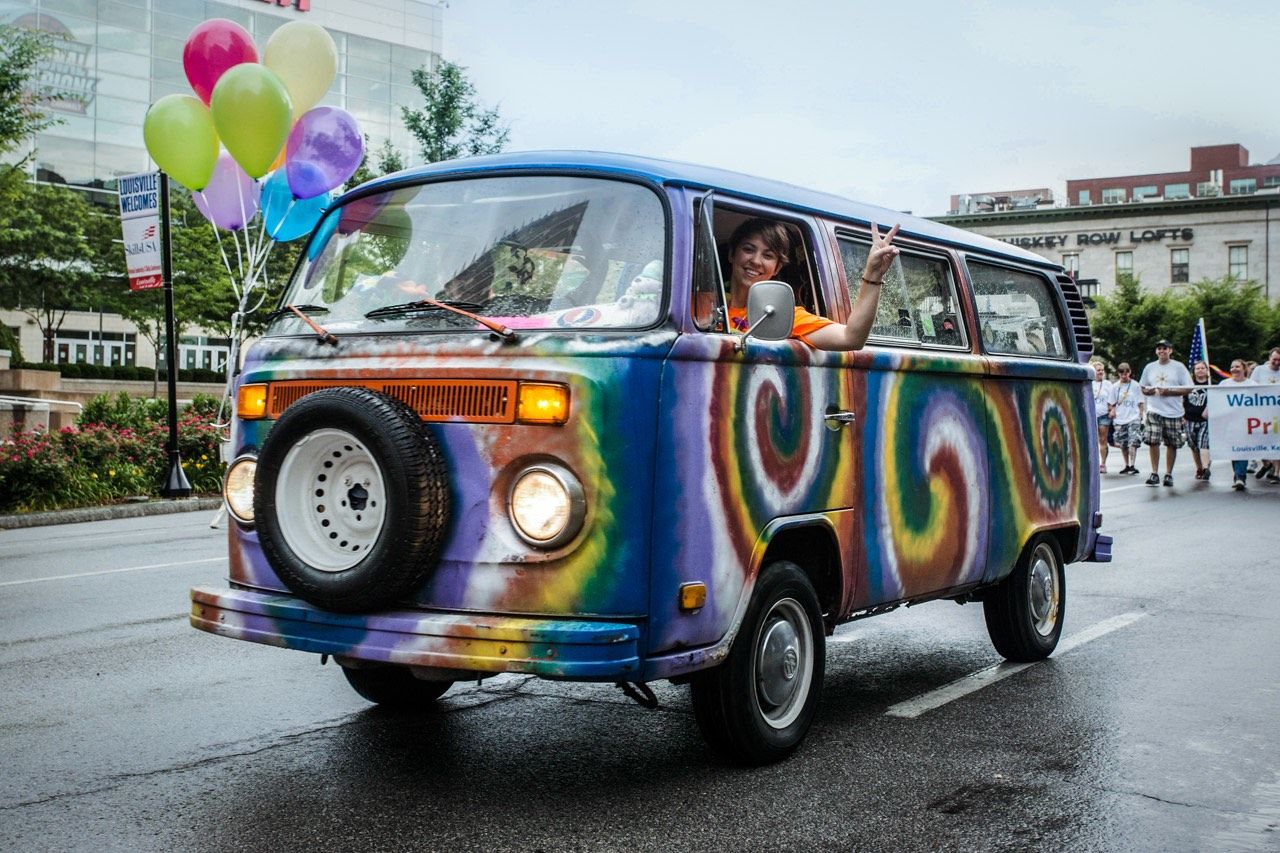 In all that talk of diversity, I forgot to mention something about Louisville that surprised even me when I first learned it: According to a 2015 Gallup survey, Louisville ranks 11th in the entire United States for the number of residents who identify as LGBTQ — which could explain why our annual, mid-June Pride Festival seems like one of the nation’s biggest and best. (Just another way we eschew the traditional “Southern” reputation.)

Our commitment to openness and hospitality runs all the way to the top. Back in 2011, our mayor signed on to the International Campaign for Compassionate Cities, making us one of the largest population centers in the country to become an international compassionate city. We’ve since been recognized as a Model Compassionate City. No wonder Travel + Leisure considers us “one of the friendliest cities in America.”

5. Speaking of diversity, did I mention the food?

With over 2,500 restaurants (and counting!), you can find anything your stomach desires. Combined with the city’s eclectic population, there’s almost literally every type of cuisine imaginable within our humble borders.

Do you like Vietnamese? Try Vietnam Kitchen, a Louisville institution for decades. Mexican food strike your fancy? Travel down Preston Highway with an eye toward the taco trucks (or my personal favorite, Santa Fe, a family-owned restaurant on 3rd Street and Central Avenue, whose cotton-candy-pink exterior is pretty hard to miss). We’ve also got Russian, Polish, Cajun, Japanese — all this is why the likes of USA Today, Southern Living, Travel + Leisure, and CNN have described Louisville, in one way or another, as having “one of the nation’s best food scenes.”

Come and find your favorite. So just leave some room for seconds, wherever you go.

6. Louisville has the largest number of pedestrian-only walking courts in the US.

All that gorging can take its toll, so I’d recommend shedding a few calories by discovering the city’s hidden walking courts. These timeless promenades are located among the most beautiful Victorian homes you’ve never seen, giving their respective neighborhoods an intimacy you can’t find anywhere else in the world.

The largest concentration is in and around St. James Court, a vision of romance come to life. It’s been the site of innumerable lovers’ strolls since it was first built after the Southern Exposition, held on these grounds in the late 1880s. This is where Thomas Edison first showed off his light bulb, so it’s a walk down history lane, too.

7. Disco is partly our fault.

No list of surprising Louisville facts would be complete without mentioning one of our weirdest (and, admittedly, funkiest) exports. No, it’s not Louisville Slugger baseball bats. Nor is it the open-faced hot brown sandwich (although both might be off-putting to vegans).

Nope, the distinction belongs to our overproduction of disco balls. For decades, Louisville manufactured over 90% of the nation’s globular refractory dance-aids, the likes of which fueled the ambulatory atrocities at “Studio 54” and beyond. Their manufacturer, Omega National Products, still proudly produces them, just not in the same quantity as they once did when polyester was a national epidemic. But they say history happens in cycles…. 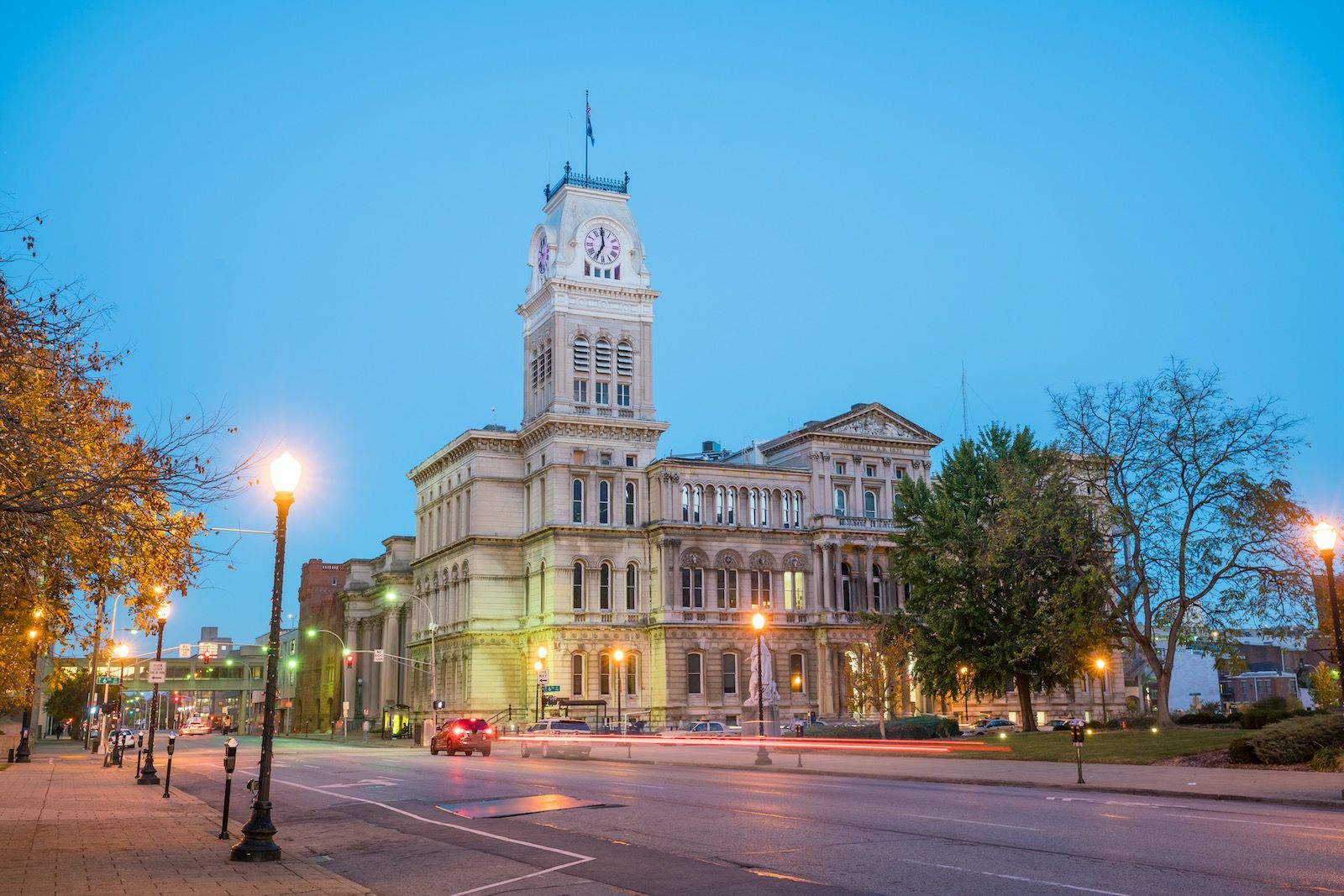 With the city’s legacy of Olmsted-designed city parks, I was spoiled growing up here. Few (if any) cities of Louisville’s size can compete with parks like Cherokee, Seneca, and Iroquois — that last one features a gorgeous view of the downtown skyline atop its summit, accessible via a quick hike.

But for all of their masterfully designed beauty, none can hold a candle to Jefferson Memorial Forest in terms of sheer size. Clocking in at 6,500 acres, Jeff is easily the largest municipal urban forest in the US. Its plethora of hiking trails, undisturbed beauty, and proximity to Louisville itself are sure to inspire your inner John James Audubon.

9. We have the biggest explosions on the continent. Probably.

Although Louisville’s love of thoroughbred horses isn’t exactly a secret, how we go about celebrating that love will not only surprise you, but might also make you want to duck and cover — at least at first. To kick off the two-week-long Kentucky Derby Festival, thousands gather downtown along Waterfront Park (with thousands more watching on TV or atop carefully scouted perches passed down via word of mouth for generations) to watch the largest controlled detonation of fireworks in North America.

In other words, we blow up lots of pretty things before we go on a two-week quasi-vacation where it’s generally acceptable to be tipsy most of the time. If that doesn’t sound like a party, then I don’t know what a party is.

Every time you’ve wished a loved one a happy birthday by singing “the birthday song,” you owe a debt to two sisters hailing from Louisville. Imagine the royalties!

Kindergarten principal Patty Hill wrote the lyrics to a melody composed and arranged by her sister, Mildred, in 1893. And although their claim to fame is disputed, you’d be wise to avoid any such debate with proud Louisvillians, who will be too polite to express their disappointment…but who probably won’t sing at your next birthday. 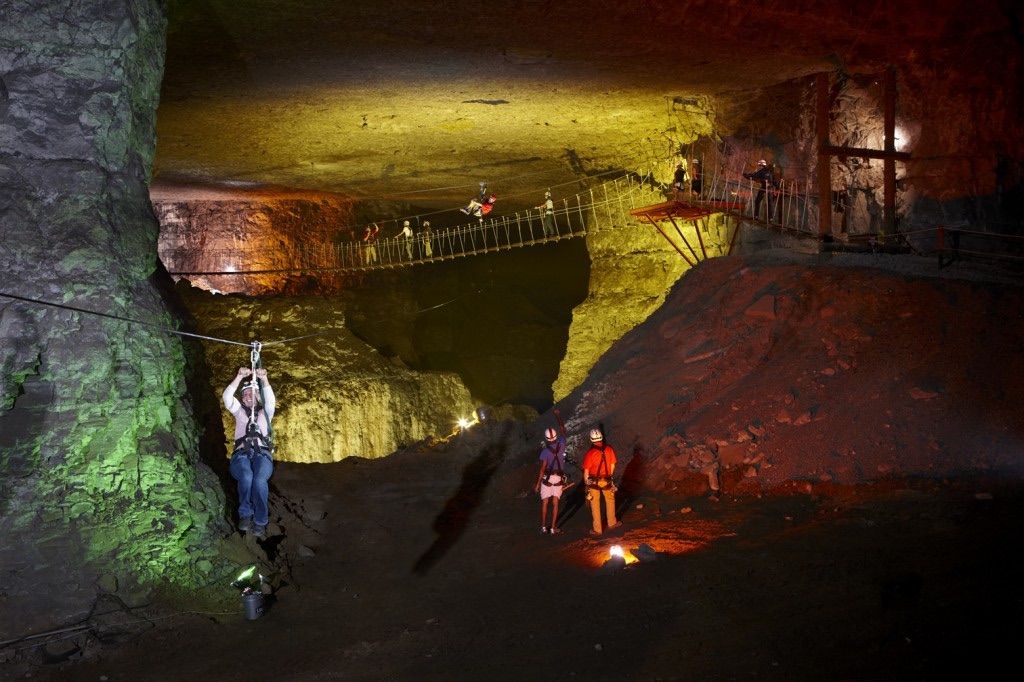 During the Cold War, the massive karst “mega cavern” located beneath much of Louisville was reserved as a fallout shelter to house much of the city’s population in the event of a nuclear attack. Between the fall of the Soviet Union and a few years ago, the cavern went unused, save as a storage area for the region’s stockpile of road salt.

Fast forward to now. Thankfully, the Louisville Mega Cavern has been opened to the public, offering guided tours detailing its Cold War-era history, a suite of worm-related experiments, and (drum roll, please) the only underground zipline in the world. You’ve done backwards, forwards, and upside-down, but I bet you haven’t done this.

Its spelling on paper is a far cry from how its natives actually pronounce it — a quirk of local dialect that will immediately identify you as Not Being From Around Here. (That’s not a bad thing, just something we use to determine our “in-group.”) As a result of being a little bit Northern, a little bit Southern, with a dash of Midwestern aw-shucks-ness thrown in, our royal French namesake (King Louis XVI) wouldn’t recognize how we’ve managed to abandon the rules of pronunciation for generations.

If you instantly want to earn a few brownie points with the populace, here’s a quick primer: “LOO-uh-vull.” Congratulations! You’re one of us! Now go grab your favorite bourbon, and join us for a spell. We’ve got loads more to fill you in on.

This post is proudly produced in partnership with the Louisville Convention & Visitors Bureau.
Tagged
Culture Trip Planning
What did you think of this story?
Meh
Good
Awesome